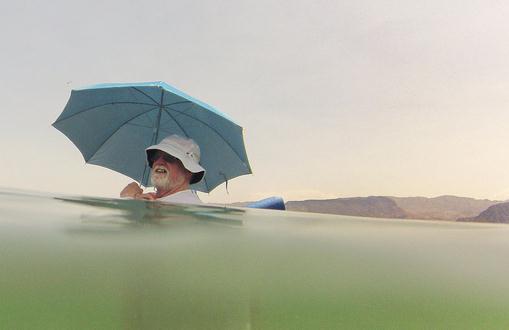 A Dry Heat
“100F doesn’t feel so bad out here because it’s a DRY HEAT”, a friend in Scottsdale told me recently. Right. My oven is a dry heat but I still try not to stick my head inside.
From Los Angeles to Las Vegas weekend highs are within a couple degrees of all-time records. Death Valley may heat up to 130F today. The all-time global heat record is 134F.
The Western USA  is stuck in a hot, dry, fiery rut, while eastern cities are enjoying a stormy trough of low pressure, a cold wrinkle aloft sparking an almost daily conga-line of severe T-storms. Philadelphia just slogged thru the wettest June ever, with 10.06 inches of rain.
Minnesota lakes are finally warming up to swim-worthy levels and this week looks remarkably sunny, warm and quiet.
Wait, Thursday is the 4th of July. You can’t be serious, Paul.
Are you sitting down? We may go close to AN ENTIRE WEEK without any rain. Highs reach the 80s – warm enough for the lake or pool, but there’s no sign record heat in the Southwest will reach us soon.
The drought is over now across most of Minnesota; a small pocket of moderate drought up north. Summer came late this year but we’ll make up for lost time.
Maybe it’ll stay balmy into November?
Photo credit above: “Mike Bouse of Henderson, Nev., shades himself with an umbrella as he floats in the waters along Boulder Beach at Lake Mead, Saturday, June 29, 2013 near Boulder City, Nev. Bouse and his wife planned to spend most of the day in and out of the water to escape the heat in the Las Vegas area where Saturday’s daytime high was expected to reach 117 degrees, the city’s all-time high. It was 108 at noon Saturday in Sin City.” (AP Photo/Julie Jacobson).

Midwest Holiday Weekend Details. Here is the European model outlook for the end of this week, showing generally dry weather within 400 miles of MSP Thursday and Friday, a few T-storms over far northern Minnesota by Saturday. Above average for the most important holiday of summer. We’ll see. Model maps: WSI. 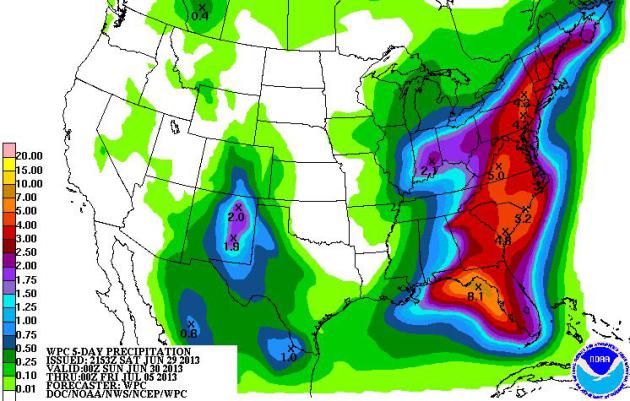 East Coast Soakers. A temporarily stalled trough of low pressure over the eastern third of the USA will spark heavy showers and T-storms from Florida on up the East Coast into New England; some 5-8″ amounts possible for the Gulf Coast of Florida, as much as 3-5″ from Atlanta and Charlotte to D.C. and New York. 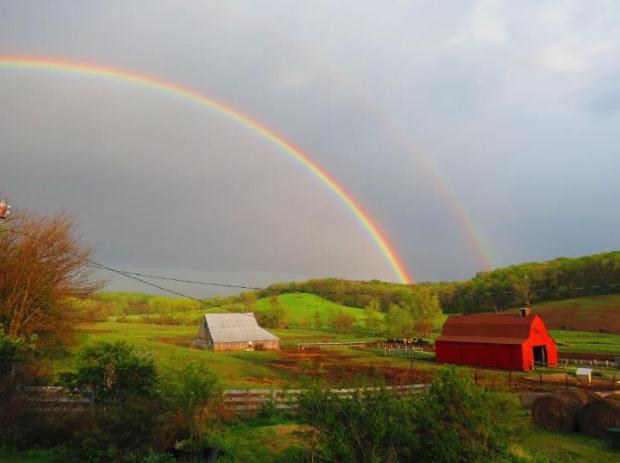 A Very Soggy June. There’s a good reason the drought is history across most of Minnesota. June rainfall was more than twice the normal amount for many towns. Here’s an excerpt from Mark Seeley at Minnesota WeatherTalk: “…Like previous months this year, June turned out to be wetter than normal for most Minnesota observers. Exceptions were some areas of northern Minnesota which received less than normal rainfall for June. For some Minnesota communities it was a very wet month indeed. Among those reporting over 9 inches for the month were Morris, Albert Lea, Wells, Caledonia, Preston, and Spring Grove. The June rainfall of 12.13 inches at Spring Grove is a new record total for the month surpassing 11.70 inches in 2000, while the 12.58 inches reported from Wells, MN is also a new June record for them…” (photo: Marlo Lundy). 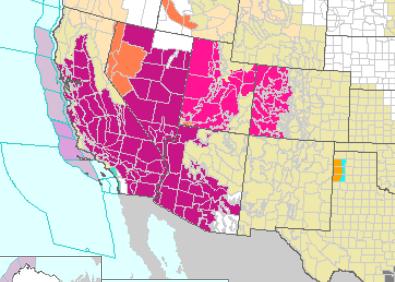 Historic, Dangerous Heat Wave Scorches Western USA. USA Today has the story; here’s the intro: “A blistering, potentially historic and record-breaking heat wave is beginning today in the West, and is forecast to last at least through the weekend. Excessive heat warnings and watches have been issued today by the National Weather Service for most of Arizona, Nevada, California and parts of Utah. They are in effect through Monday. “An excessive heat warning is issued when temperatures are forecast to reach dangerous levels that will stress the body if precautions are not taken,” the weather service warns. “Heat stroke symptoms include an increase in body temperature, which leads to deliriousness, unconsciousness and red, dry skin,” according to a weather service online report. “Death can occur when body temperatures reach or exceed 106-107 degrees…”

From the San Diego office of the National Weather Service: 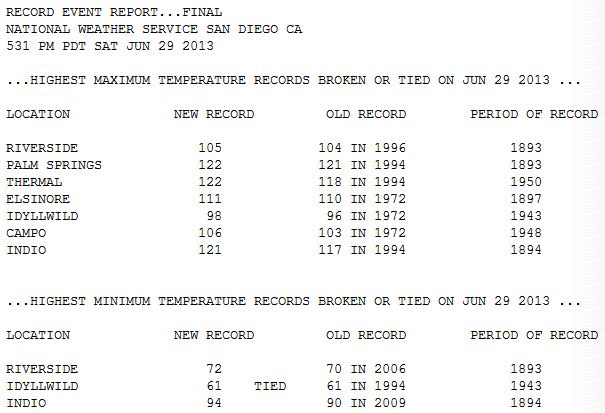 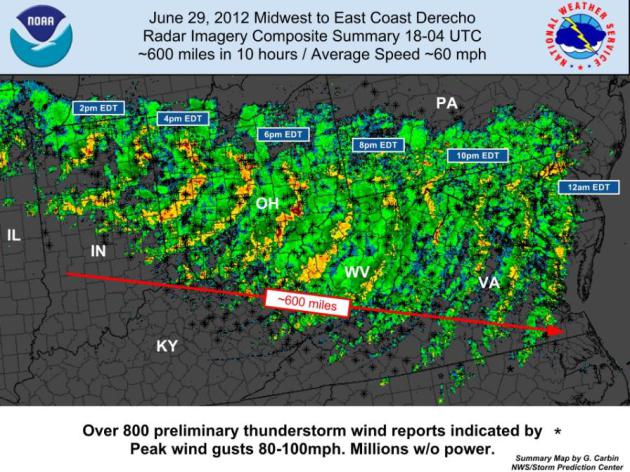 Super-Derecho. A year ago today residents from the Ohio Valley into the Mid Atlantic Region were cleaning up from one of the most severe derecho straight-line wind events ever recorded. To be called a derecho these boomerang-shaped storms have to travel at least 240 miles. The derecho of June 29, 2012 traveled nearly 900 miles, from Iowa to near Norfolk, knocking out power to millions of residents. It would take weeks for the lights to come back on in some communities, including metro Washington D.C. 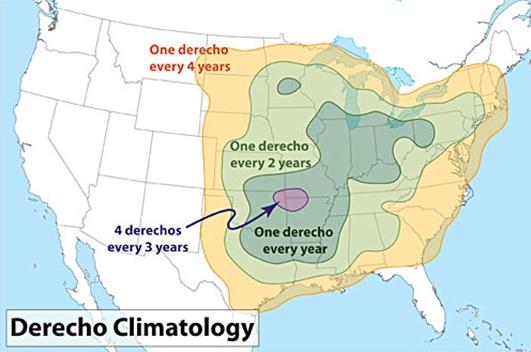 Derecho Climatology. Texarkana is ground zero for derechos, with 4 derechos every 3 years. An average of 1 derecho a year is typical from Dallas to Chicago and Louisville (as well as the Twin Cities of Minnesota) according to NOAA NCDC climatology. These intense, long-lasting wind storms are most likely in June and July, when steamy, tropical air from the Gulf of Mexico surges north. 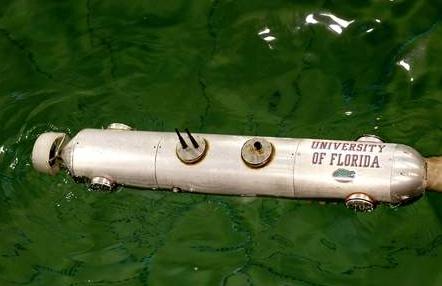 University of Florida Devices May Change How Storms Are Tracked. Remotely controlled weather drones to (more safely) monitor and track tornadoes and hurricanes? Seems like a logical evolutionary step to me. Here’s a clip from a very interesting article at gainesville.com: “…Kamran Mohseni, a UF engineering professor, and his team are developing miniature airplanes and small submarines with sensors that track pressure, temperature, humidity and other measurements. Sent by the dozens into the storm, Mohseni said the many small vehicles working together can obtain accurate information from many different environmental situations. Now others, including many in the military, favor large do-it-all devices that gather information from inside the storm, Mohseni said. While the idea sounds reminiscent of the 1996 movie “Twister,” it’s more complex…”

Image credit above: “The Cephelobot, a autonomous underwater vehicle, floats in a large tank while undergoing tests at the University of Florida on Tuesday June 25, 2013 in Gainesville. The submarine is a prototype that will be launched into the ocean under hurricanes and send back weather data.” Matt Stamey/Gainesville.com Staff photographer. 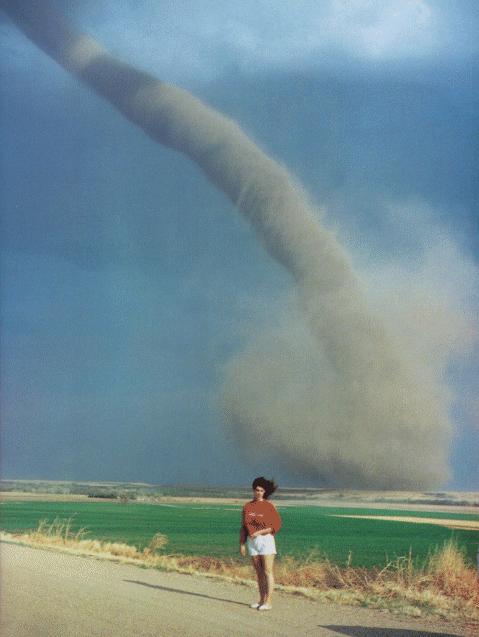 Has TV Weather Coverage Become Too Dangerous? Short answer. Yes. Here’s an excerpt from kten.com: “The newest extreme sport: covering the weather for TV. In an effort to satisfy the public’s appetite for footage of blizzards, hurricanes and, most recently, the devastating tornadoes in Oklahoma, reporters as well as professional and amateur chasers are heading straight into the eyes of the storms. After Tim Samaras, Paul Samaras and Carl Young, the stars of Discovery’s Storm Chasers series, died while filming the El Reno, Oklahoma, tornado on May 31, some in the industry are wondering if the competition to get the scariest shot has gone too far. Weather Channel meteorologist Mike Bettes thinks so. While following the same twister, his car was lifted off the ground and dumped 325 feet away. “This is a wake-up call about the safety of people chasing weather,” says Bettes, who suffered cuts from broken glass (his cameraman cracked a vertebrae in his neck)…” 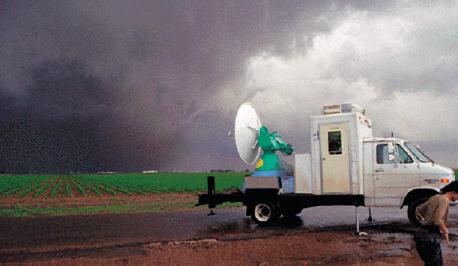 After Storm Deaths, Search On For Perfect Warning. Can too much lead time for a tornado warning be just as dangerous as not enough? It may sound counterintuitive, but if there’s more than 20-30 minutes warning lead time it may tempt (some) people to try to outrun a tornado, or take video of the approaching storm. Details in this clip from AP and Weatherbug.com: “…Some experts, though, acknowledge there is debate about whether there can be too much advance warning of tornado strike, and if this could lead people to take foolish risks such as trying to dart across town to pick up a loved one or taking to the open road to try to outrun a violent storm.”There’s a great philosophical discussion about what constitutes the ideal lead time,” said Greg Carbin, a warning coordination meteorologist for the National Weather Service’s Storm Prediction Center in Norman, Okla. “The more lead time the better, but the flip side of that is that accuracy and certainty in our predictions usually decrease with lead time.” Over the last five years, residents in the U.S. have been given an average lead time of 13 minutes between the issuance of a tornado warning and a confirmed tornado on the ground. That’s a 17-minute increase from the 1980s, when tornado warnings were typically issued four minutes after a funnel had been spotted, said Lans Rothfus, who is deputy chief of the warning research and development division at the National Severe Storms Laboratory in Norman…” 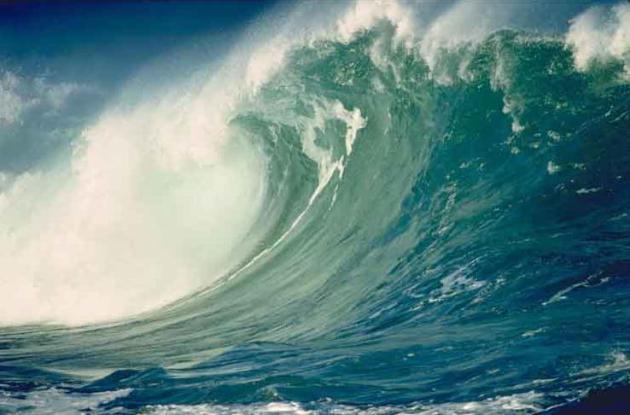 Tips For Surviving A Mega-Disaster. Not something any of us want to consider – at least we don’t have to worry about tsunamis in Minnesota; one of the few natural disasters we don’t have to lose sleep over. Here’s an excerpt of an interesting article at Northeast Indiana Public Radio: “…The nation has done a good job preparing for natural disasters like hurricanes and tornadoes, which occur frequently but usually produce limited damage and relatively few casualties, the panelists said. But government officials are just beginning to develop plans for events like a major tsunami or a large asteroid hurtling toward a populated area. The difference between a disaster and a mega-disaster is scope, the scientists say. For example, Hurricane Sandy was defined as a disaster because it caused significant flooding in New York and New Jersey last year, says Lucy Jones of the U.S. Geological Survey. But the flooding was nothing like what happened to California in the winter of 1861 and 1862, she says…” (Image: Oregon State). 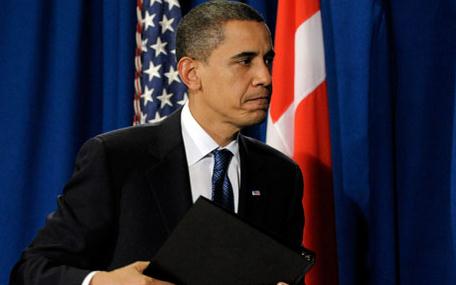 Obama Asks Americans To Declare They Won’t Vote For Those Who Don’t Act On Climate Change. Here’s a clip from The Washington Post: “…If you agree with me, I’ll need you to act,” Obama says, appealing to Americans to spread the word to their family, friends and classmates. “Remind everyone who represents you, at every level of government, that there is no contradiction between a sound environment and a strong economy — and that sheltering future generations against the ravages of climate change is a prerequisite for your vote.” Obama’s remarks in his weekly radio and Internet address, released Saturday but recorded at the White House prior to the start of Obama’s weeklong trip to Africa, marks the start of a new phase for Obama’s efforts on climate change: convincing the public to sell it for him…” (Photo: AP).