25 Jun 2013, 5:34 am
Share:
Doppler in your Pocket
Here’s a vaguely personal question: do you have Doppler in your pocket? I’m not trying to insult you or sell you anything. I’m talking about the ability to call up radar and warning maps on your smart phone. We’re not always in front of TV’s or computer screens, but with the right app there’s no reason to be surprised by a sudden tantrum from Mother Nature.
Typically, outdoor sirens aren’t sounded for severe thunderstorm warnings. And yet Friday’s storms were historic, impacting far more Minnesotans than most tornadoes or even floods. The day is coming (soon) when we will each have our own personal warning systems (TV at home – smartphone enabled while mobile). The government won’t save us – we need to take personal responsibility for our safety, and the safety of our families.
And yes, it’s a minor meteorological miracle that nobody was injured or killed during Friday evening’s hurricane-like winds. We were very, very lucky.

Tuesday Severe Threat. There’s a slight risk of large hail and damaging winds from the Dakotas and much of Minnesota to Des Moines, Chicago and Detroit, another region that needs to be monitored over northern New England. Map: SPC. 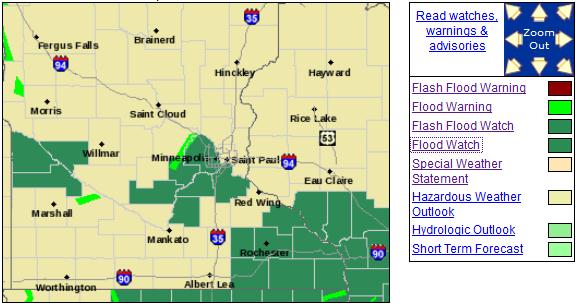 Flood Watches And Warnings. With recent heavy rains the local NWS office is upgrading some watches to warnings. If you live along a flood-prone river or stream you’ll want to pay attention in the coming days. Here’s the latest Flood Watch: 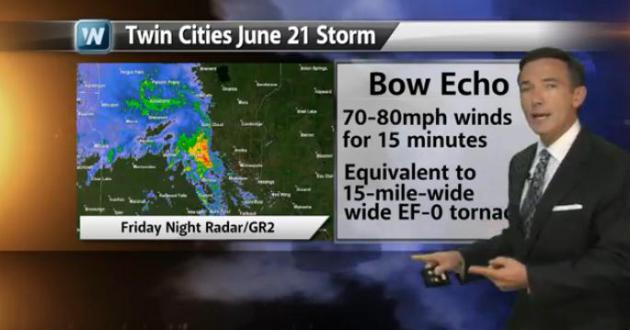 Lessons Learned From The June 21 Mega-Storm. Last Friday evening’s bow echo, severe winds and flooding rains were a subtle (yet blunt) reminder that damage from severe thunderstorms can be even more extensive than a tornado touch-down. The latest edition of Climate Matters is here: “It wasn’t a tornado, but hurricane force winds combined with a saturated ground that led to widespread damage and the largest power outage in Minnesota’s history. Friday night’s storm was the equivalent of a 15-mile-wide EF-0 tornado, and WeatherNation Chief Meteorologist Paul Douglas says it serves as a reminder that you need to take severe thunderstorms seriously.”

Extra Severe. Imagery above from Friday evening’s bow echo; reflectivity upper left showing rain and hail, radial velocity upper right shows a severe gust front as rain and hail-cooled air rushed east at 50 mph. A few thoughts from Friday’s severe gust front:
* Sirens are not sounded for Severe Storm Warnings (with the exception of Dakota County).
* Tornadoes get more attention, but severe storms can be just as destructive. Damage is often more extensive, but not as severe as in a major tornado. To put things into perspective, the damage left behind from Friday’s 70-80 mph gust front was roughly equivalent to an EF-0 tornado, one that was 15-20 miles wide.
* The supercell thunderstorm that morphed into a bow echo raced east at 50 mph, moving faster than the high-res models were suggesting. Winds gusted close to hurricane force across much of Hennepin County for 10-15 minutes. The persistence of the high winds, coupled with wet, saturated ground from early morning storms, helped to bring down even more trees.
* This rotating supercell was able to sustain itself, keeping the rain and hail-cooled gust front intact for several hours, prolonging the damage. A typical thunderstorm self-destructs after 30-45 minutes, but spinning supercells can protect the warm updraft, sustaining a storm for a long period of time.

Bow Echo. Click to activate loop. Here is a loop (GR2) of the severe thunderstorm that swept across the metro area Friday evening, becoming more severe as it pushed east of Lake Minnetonka toward South Minneapolis, whipping up a 70-80 mph gust front in the process.

Thundery Holding Pattern. Once again weather systems are creeping eastward across the USA, showers and T-storms, some strong to severe, will continue to flare up from the Midwest into the Great Lakes and New England. The southwest remains dry – nothing brewing in the tropics thru the 4th of July. 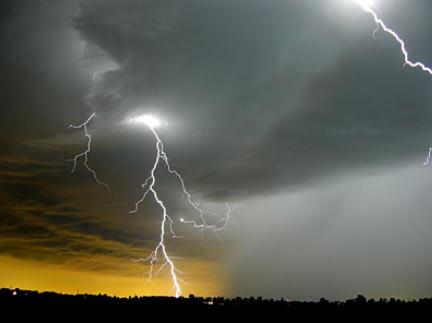 Lightning Safety. After concern was raised about recent Little League baseball games played during questionable weather (lightning observed nearby) I wrote this note to an ump who asked me about criteria for calling off a game, and when it’s safe to resume play. Here is my reponse:

“With the recent spate of severe and damaging thunderstorms impacting the metro area, I wanted to drop you a quick note and remind you and your colleagues that lightning-related fatalities are most likely at the very beginning and tail-end of an outdoor event. This is where we see the most lightning-related injuries and fatalities, not during the height of the storm, when heavy rain/hail is falling.
Here’s the problem: lightning can travel 8-10 miles in a horizontal direction. In fact every year people are struck with blue sky overhead, a thunderstorm on the distant horizon. The National Weather Service’s “30-30 Rule” has become a defacto standard in the weather business. When you can count 30 seconds between lightning and thunder it’s time to head for shelter; and wait 30 minutes after the last thunderclap before resuming safe play on the field.
From a National Weather Service link focused on Lightning Safety and Outdoor Sports Activities:
“Because electrical charges can linger in clouds after a thunderstorm has passed, experts agree that people should wait at least 30 minutes after the storm before resuming activities”.
More information from NOAA here:http://www.srh.noaa.gov/jetstream/lightning/lightning_safety.htm
I realize the wet spring has compressed the season, and players (and their parents) are anxious to get these games in and complete the season. However the overriding goal should be safe play and lowering weather risk. Any temptation to “push the weather” and get coaches, players (and spectators) out onto a ball field within 30 minutes of the last report of thunder is not only unsafe, but a potential disaster in the making. From a litigation standpoint, there’s a large and growing body of evidence that waiting 30 minutes significantly increases safety margins and helps to avoid lightning-related disasters. Taking a chance and resuming play within that 30 minute window is a recipe for fatalities, life-long, chronic, lightning-related injuries, and litigation.
As an interested parent who spent many long weekends at the local ballpark with my two sons (checking Doppler on my smart phone more often than I would have liked) I have an interest in safe play and taking any and all steps to reduce the potential for weather-related tragedy.”
– Paul Douglas, CBM Meteorologist. Founder of Media Logic Group. 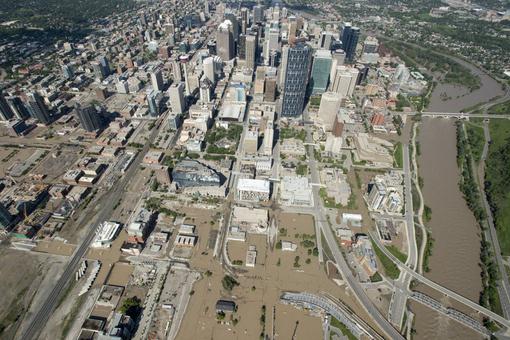 Alberta Flood Volunteers: “People Have Really Come Together”. Portions of Calgary are still underwater; this is reportedly the worst flooding Alberta, Canada has experienced in recorded history. CTV News has a story of the aftermath and clean-up operations underway: “As southern Alberta deals with the worst flooding in its history, volunteers and staff with the Canadian Red Cross say they are working around the clock to help those affected get through the crisis and begin the cleanup. Matt Baden, a Red Cross emergency response team lead, has been working at an emergency shelter in Blackie, just a few kilometres east of High River, the community that was hardest hit by the flooding. He says currently, the Red Cross is working to supply the evacuees at the shelter with the basic necessities, such as cots, blankets and hygiene kits, and to make people as comfortable as possible…”

Photo credit above: “A flooded downtown Calgary, Alberta is seen from a aerial view of the city Saturday, June 22, 2013. The two rivers that converge on the western Canadian city of Calgary are receding Saturday after floods devastated much of southern Alberta province, causing at least three deaths and forcing thousands to evacuate.” (AP Photo/The Canadian Press, Jonathan Hayward)

iFetch Allows A Dog To Play Fetch On It’s Own. Is it me, or is this just kind of sad. Who says technology is making us smarter? Gizmag.com has the story; here’s the intro: “Playing fetch with your dog is surely one of life’s high points. After a short while though, it can all get a bit tiring and just a tad boring. Your bouncing bundle of fun, on the other hand, would happily keep the game going for hours. Fortunately, technology is here to help. The iFetch from the Hamill family shoots out a ball for your dog to fetch, and when fido drops it in the opening at the top, it’s fired back out again…” 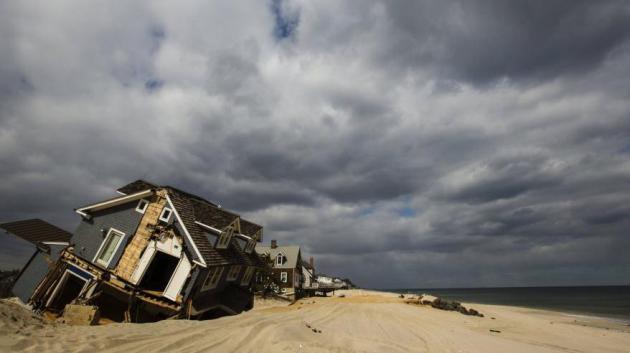 Introducing The New Profession Of Extreme Weather Architect. Yes, the upward spike in T-storm winds, hail and flash flooding is already impacting the way some architects design homes to better withstand weather extremes. Here’s an excerpt fromQuartz: “Daniel Horn, a fresh New York architecture graduate, has launched a global competition around a tricky design question—what is the most aesthetic way to raise the elevation of an entire neighborhood block by eight to 10 feet? Call it extreme weather architecture. Horn, a 23-year-old graduate of the New York Institute of Technology (more on him below), is part of a boom in design competitions and urban reconstruction initiatives built around climate change. A rash of storms, drought and fires in recent years has ignited this contemplation of a new school of design cutting across cities and shorelines, homes and commercial buildings. The emerging class of architecture suggests the onset of a global design-and-construction industry worth tens of billions of dollars in the coming years…” 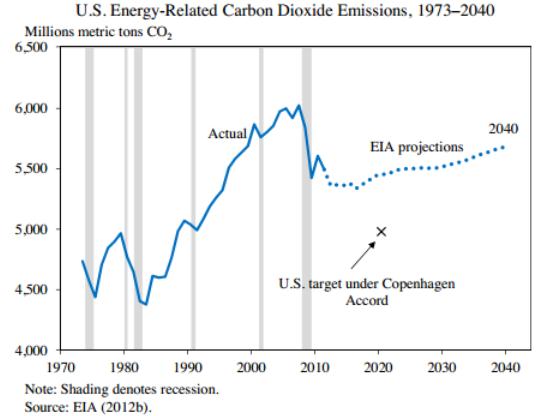 Obama Is Announcing Major New Climate Plans Tuesday. This Chart Explains Why. The Washington Post has the story – here’s the intro: “On Tuesday, President Obama is expected to announce a couple major new steps to address global warming, including a plan to limit carbon-dioxide emissions from existing  power plants. But what’s the goal here? To put this all in context, take a look at this chart from the most recent Economic Report of the President, which shows the United States is nowhere near on pace to meet its short-term climate targets by 2020…”

Obama’s Climate Plan Seen Putting Heat On Power Plants, Appliances. Here’s a clip from a story at Politico: “…While the climate speech isn’t likely to touch on the Keystone XL oil pipeline, the controversial project that has spawned a massive opposition campaign among the president’s liberal base, it is expected to involve these measures:

1. Power plant clampdown
All eyes are on EPA, the federal agency in charge of writing and implementing what are likely to be some of the most controversial regulations in the president’s second term: limiting carbon emissions from both new and existing power plants. Heather Zichal, the White House energy adviser, suggested Wednesday that EPA is committed to moving forward with climate regulations for power plants, particularly from the fleet of coal-fired plants that have traditionally provided the bulk of the country’s electricity. Power plants are the biggest source of U.S. carbon emissions…”

Photo credit above: “In a highly anticipated speech, the president will outline his second-term climate plan.” AP Photo