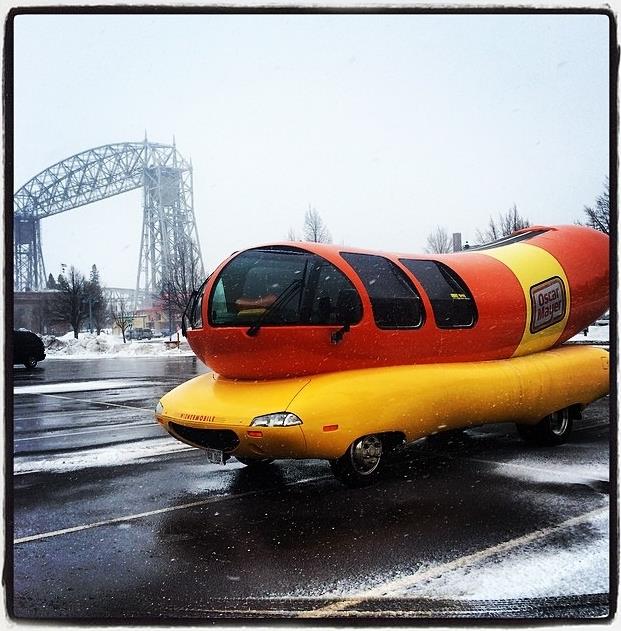 I have vivid memories of my first April here, back in 1983. On April 14, 1983 13.6 inches of snow DELIGHTED residents of the Twin Cities. A cool foot of snow blanketing green lawns and dazed robins?

I wondered what I had gotten myself into.

After the aggressive winter we’ve just muddled through this feels like piling on, rubbing salt in the wound. But latest guidance suggests we’ll pick up a total of 4-7″ of concrete-like slush; enough to shovel & plow – but we may miss out on that ominous “foot of snow” after all, although some northern/western suburbs may pick up close to 10″ by late morning. That’s quite enough, thank you. Snow tapers this morning with slowly improving travel conditions this afternoon. The drive home won’t be quite as traumatizing.

The 6th coldest meteorological winter on record meant that most storms fell as snow; we didn’t have enough warm air to trigger much ice or rain, making snowfall predictions more straightforward. Our current storm pulled enough warm air aloft into Minnesota for ice and rain, and that helped to keep final snowfall tallies down a bit.

Your reward for tip-toeing through the slush this morning? 50s return next week, even a shot at 60 by Wednesday afternoon.

Full disclosure: I’m off my meds, but I suspect this will be the last (significant) snowfall of the season.

* photo of the Oscar Meyer Wienermobile circling Duluth earlier in the day Thursday, where up to 12″ was expected by midday today, courtesy of Clint Austin. 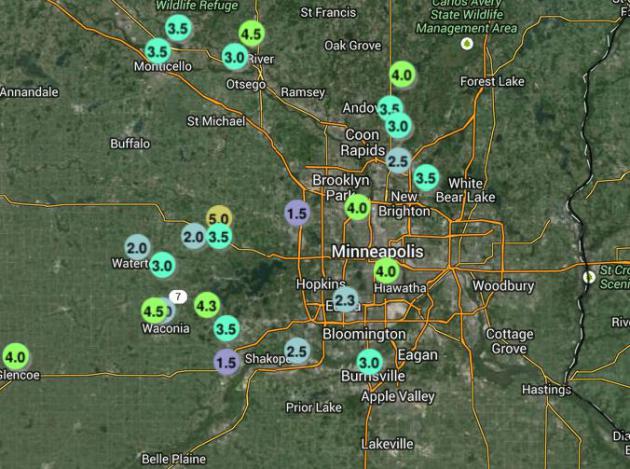 Snowfall Amounts. I snapped this frame-grab around 11 PM last night, when much of the metro had already picked up a good 3-4″ snow. Click here for the latest amounts, courtesy of the Twin Cities National Weather Service. A detailed list of additional reports can be found here. 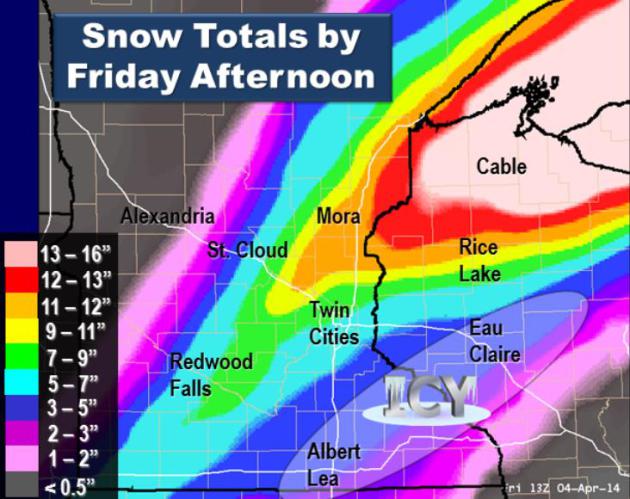 Expected Snow Totals. I tend to agree with the thrust of the Twin Cities National Weather Service, who published this map showing snowfall amounts by midday Friday, generally 5-9″ across most of the metro, with heavier amounts over the northern and western suburbs, more than a foot north of Rice Lake. 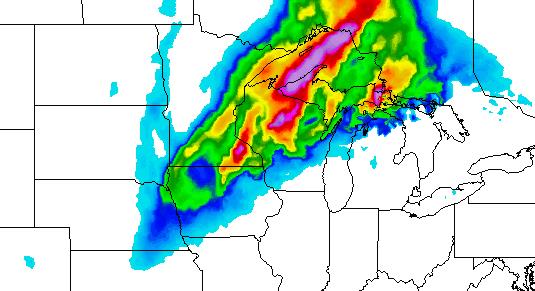 RAP Solution. Last night’s RAP shows a few bands of heavier snow setting up east, and northwest of the MSP metro area, where some localized 8-10″ amounts are expected. The immediate metro may wind up with closer to 4-7″ heavy wet snow, enough to turn the morning commute into a gasp-worthy, white-knuckle adventure. Map: NOAA and Ham Weather. 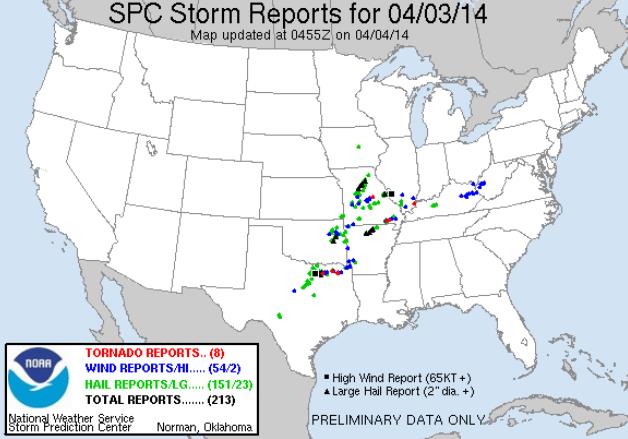 Thursday Severe Weather Outbreak. Although not as bad as feared, SPC counted up 8 tornadoes as of midnight, including the suburbs of St. Louis and the Denton area, just north of Dallas, Texas. Click here for a list of severe storm reports.

Historic April Snowstorms. Will we set a record today? I doubt it – I don’t believe today’s storm will rival April 14, 1983. Here are details from the Minnesota Climatology Working Group: “The largest April snowstorm in the Twin Cities happened on April 14, 1983. A strong area of low pressure had ample moisture to work with and deepened over northern Iowa as it moved to the east and northeast. The event started as rain on the 13th and changed over to snow during the wee hours of April 14th. Persons in east central Minnesota were surprised to wake up to a foot of snow on the ground with brilliant morning sunshine. The grand total at the Twin Cities airport from that storm was 13.6 inches. The Metrodome deflated for the third time since its construction in this storm. (The first two times were Nov 21, 1981 and December 30, 1982.) Over 400 schools canceled class on April 14 and the University of Minnesota shut down at 2:30pm. Residential mail deliveries and pickups were canceled for only the third time in 20 years. The Twin Cities International Airport was shut down for 5 hours from 9am to 2pm on the 14th…” 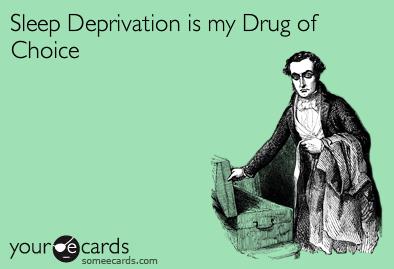 How Sleep Deprivation Drives The High Failure Rate Of Tech Start-ups. No, it appears pulling all-nighters won’t necessarily save your company, but getting a good night’s sleep – consistently – just might. Here’s a clip from Forbes: “…While the tech industry is the subject of special fantasies of how exponential profits can spring from just a few people working together on laptops, three out of every four startups fail. Could it be that the myth of the obsessive careerist whose dedication to work follows him to bed every night is actually a grand farce of worst practices and general dysfunction? It may be that accepting the normalcy of non-stop work is encouraging a culture of unusually bad thinking, painstakingly propped up by those charged with turning thought into real product…” 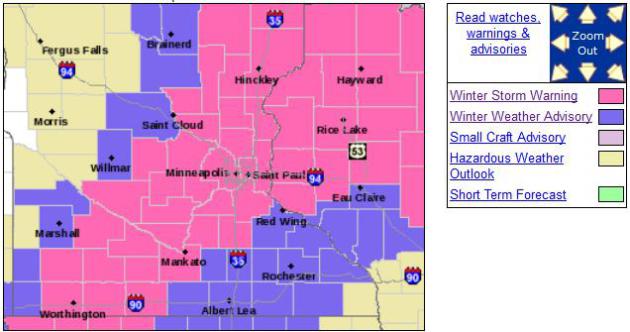 TODAY: Winter Storm Warning. 4-7″ slush, up to 10″ piling up over the northern/western suburbs of the Twin Cities area. Snow tapers by midday with slowly improving travel this afternoon and evening. 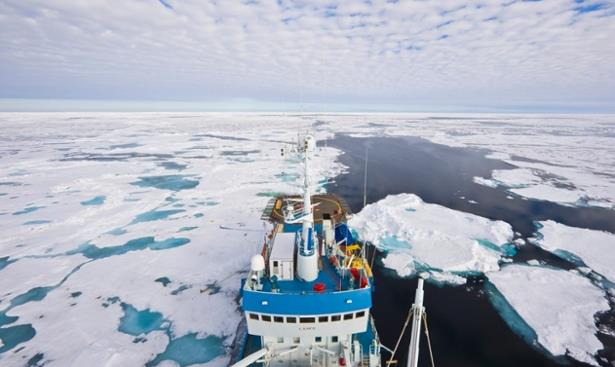 Arctic Sea Ice Falls To Fifth Lowest Level On Record. The Guardian has the latest on a trend at the top of the world that may be having a domino effect, impacting weather systems across the Northern Hemisphere. Here’s an excerpt: “Arctic sea ice remained on its death spiral on Wednesday, with the amount of winter ice cover falling to its fifth lowest on the satellite record, scientists at the National Snow and Ice Data Center said. The scientists said Arctic sea ice extent for March averaged 14.80m sq km. That’s 730,000 sq km below the 1981-2010 satellite average. The latest findings reinforce a trend that could see the Arctic losing all of its ice cover in the summer months within decades...” 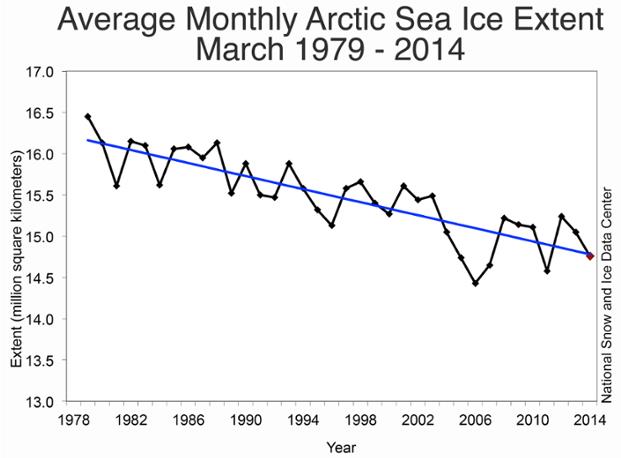 Less Ice At The Top Of The World. March trends since 1978, courtesy of NSIDC, The National Snow and Ice Data Center. 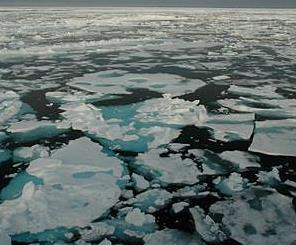 NSIDC, NASA Say Arctic Melt Season Lengthening, Oceans Rapidly Warming. Here’s an excerpt from Space Daily: “The length of the melt season for Arctic sea ice is growing by several days each decade, and an earlier start to the melt season is allowing the Arctic Ocean to absorb enough additional solar radiation in some places to melt as much as four feet of the Arctic ice cap’s thickness, according to a new study by National Snow and Ice Data Center (NSIDC) and NASA researchers. Arctic sea ice has been in sharp decline during the last four decades. The sea ice cover is shrinking and thinning, making scientists think an ice-free Arctic Ocean during the summer might be reached this century. The seven lowest September sea ice extents in the satellite record have all occurred in the past seven years…”

Photo caption: “Some areas, such as the Beaufort and Chukchi Seas, are freezing up between six and 11 days later per decade.” 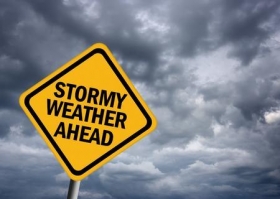 The U.N.’s New Focus: Surviving, Not Stopping, Climate Change. Adaptation is a given, seeing that nations have yet to get serious about mitigation. The Atlantic has the story – here’s a clip: “…As a result, we need to adapt to a warming planet—to minimize the risks and maximize the benefits associated with increasing temperatures—rather than focusing solely on curbing warming in the first place. And it’s businesses and local governments, rather than the international community, that can lead the way. “The really big breakthrough in this report is the new idea of thinking about managing climate change,” Chris Field, the co-chair of the UN’s Intergovernmental Panel on Climate Change (IPCC) study, said this week, adding that governments, companies, and communities are already experimenting with “climate-change adaptation…” 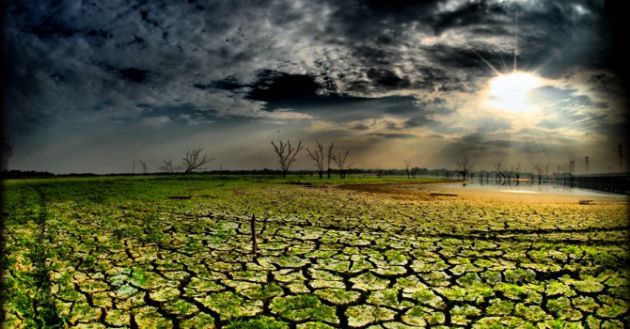 Warming Temperatures Could Dry Out One Third Of The Planet. Climate Central has the story – here’s the introduction: “Warming temperatures, scientists say, can tip places into drought conditions by increasing evaporation and sapping soil of its moisture. A new study suggests up to a third of the Earth’s land area could be subject to drier conditions because of warmer temperatures, not just changing precipitation patterns, by the end of the century. The study finds that one of the agricultural heartlands of the United States, the Central Plains, could become drier, even though it may not receive less rain in the future, simply because warmer temperatures will drive evaporation to dry out the rich soils. Drier soil makes it harder to grow the food that feeds the country, which can have knock-on effects on trade and national security…”