24 Feb 2013, 6:55 am
Share:
A “Tough Winter”?
Winters have been trending milder, to the point where a (nearly average) winter feels like punishment from a vindictive Old Man Winter.
“Paul, are you going to write about this tough winter we’re having?” a friend asked last week. Huh?
Which got me thinking. Has it been that bad?
MSP has picked up 35.5 inches of snow. During an average winter we should be up to 40 inches by now. 9 subzero nights; average for an entire winter is 22.5. Based on NWS Heating Degree Days we’ve saved roughly 5 percent heating our homes & businesses since last fall. A tough winter? No, not really.
A reality check, compared to last year’s Memphis-like winter. In spite of climate change we’ll still experience cold fronts and occasional snows. If it ever gets to the point where it never snows (at all) we’ll be past the point of no return.
Quiet weather prevails this week, with a minor league thaw and a major rain/wind storm tracking well east of Minnesota. Low to mid 30s give way to 20s by late week, but no more polar (subzero) air is in sight.
March 2013 won’t bring 70s & 80s, like last year.
But the Spring Parade of Homes kicks off next weekend. Birds are chirping again!
It won’t be long now. 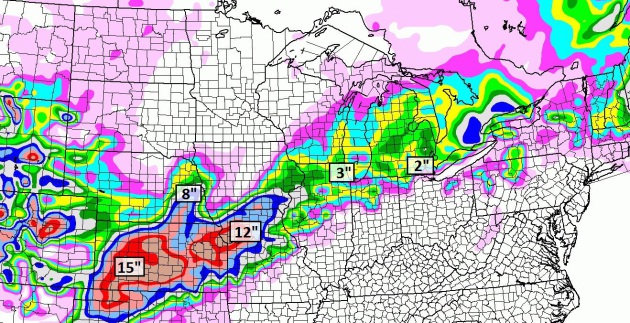 New Snow By Tuesday Night. The NAM model prints out another snowy drubbing for Kansas, as much as 15-18″, maybe another foot for Kansas City. Omaha may pick up 4-6″, with 3-4″ for Chicago, maybe 2-3″ for the Detroit area. Boston picks up 1-2″ later today, much heavier amounts northinto Maine. 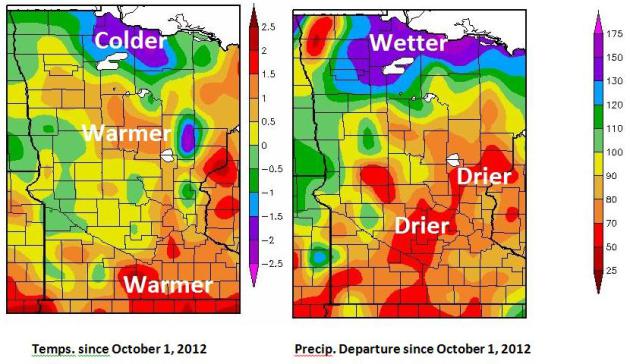 Spring 2013 Climate Outlook. Here’s an excerpt of an interesting post (and some great visuals) from the Grand Forks office of the National Weather Service: “A change in the weather pattern brings an increased spring snow-melt flood risk and the hope to alleviate drought conditions for the growing season. Since October 2013 temperatures across the Red River Valley have generally averaged close to normal. The warmest temperatuers have been across the central portions of the basin with the coldest across the Upper Devils Lake Basin and along the International Broder region of north central Minnesota. Departures generally range from 1 degree below to 1 degree above the median…” 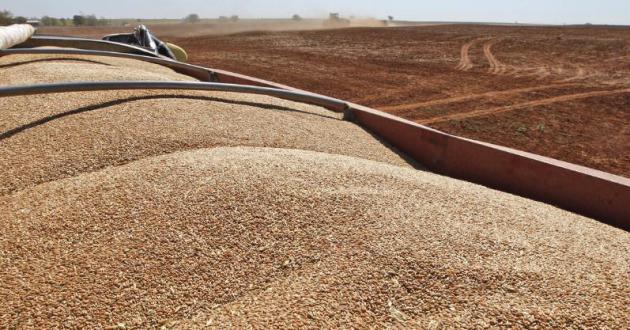 Despite Lingering Drought, USDA Predicts A Flood Of Grain. NPR has the story – here’s a snippet: “Economists at the U.S. Department of Agriculture, gazing into their crystal ball, see American farmers planting and harvesting huge amounts of corn, soybeans, and wheat this year. They’re predicting a record harvest of corn: 14 billion bushels, up nearly 40 percent over last year’s drought-crippled level. With supply up, prices will fall. The USDA thinks that the price of the average bushel of corn could fall by a third. And soybean production and price are expected to follow a similar track…” 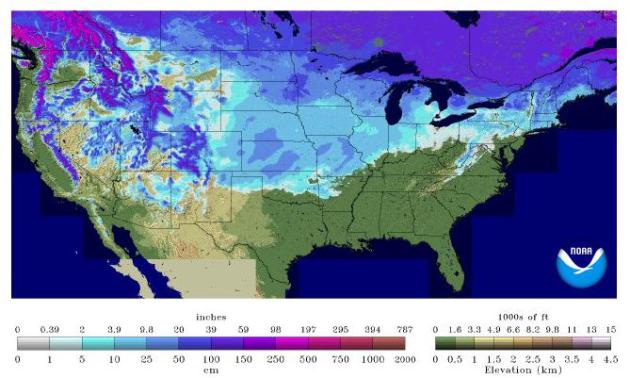 Thin Snowpack In West Signals Summer of Drought. Here’s an excerpt from The New York Times (subscription may be necessary to read full text): “After enduring last summer’s destructive drought, farmers, ranchers and officials across the parched Western states had hoped that plentiful winter snows would replenish the ground and refill their rivers, breaking the grip of one of the worst dry spells in American history. No such luck. Lakes are half full and mountain snows are thin, omens of another summer of drought and wildfire. Complicating matters, many of the worst-hit states have even less water on hand than a year ago, raising the specter of shortages and rationing that could inflict another year of losses on struggling farms…” (USA snow cover map above courtesy of NOAA). 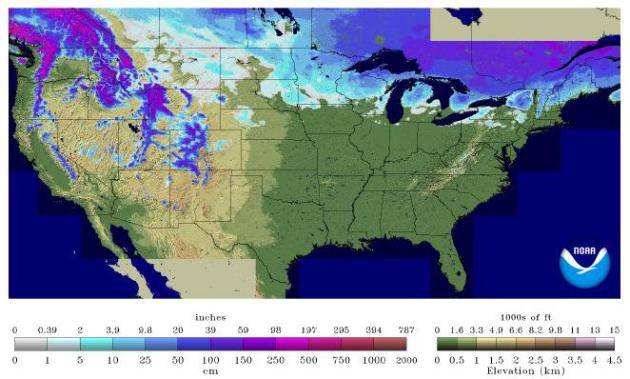 February 23, 2012 Snow Cover. I was struck by the difference from last year at this time, when only 23% of the USA had any snow on the ground (vs. 56% now). The lack of snowcover was one factor in record March warmth and thousands of record highs. We’ll see a warming trend next month, but I doubt we’ll see anything equivalent to 2012, when flowers were blooming in Minnesota by late March. Just a hunch. 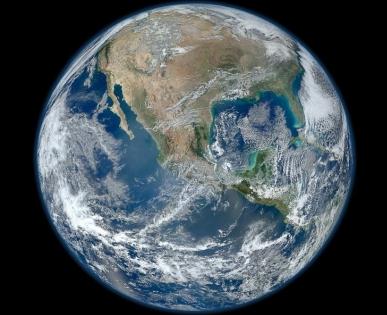 Earth’s Average Temperature For January Ties As 9th Warmest On Record: NOAA. Details from Huffington Post: “The globally-averaged temperature for January 2013 tied with 1995 as the ninth-warmest January since record keeping began in 1880, according to a news release today from the National Oceanic and Atmospheric Administration. The combined average January temperature over global land and ocean surfaces was 54.57 degrees Fahrenheit, or 12.54 degrees Celsius. This January marked the 37th consecutive January and also the 335th consecutive month with a global temperature above the 20th Century average, NOAA reported…” 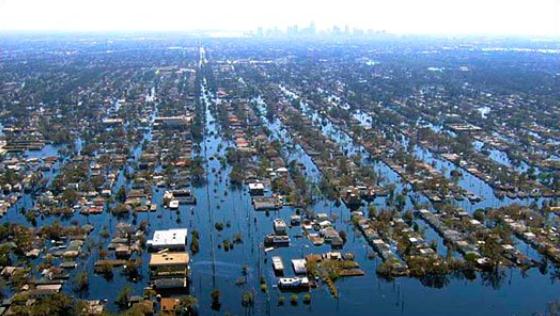 Louisiana May See The Fastest Rising Seas In The World. Here’s an excerpt from Grist: “As Hurricane Katrina approached, many Americans for the first time learned about New Orleans’ precarious, below-sea-level orientation. The city is described as “bowl-like,” rimmed by levees and natural structures that might not hold back surging storm water — and might make drying out nearly impossible. It turned out that the analogy was imperfect. New Orleans is more like a TV dinner tray, and only the Ninth Ward ended up flooded….From The Lens: Stunning new data not yet publicly released shows Louisiana losing its battle with rising seas much more quickly than even the most pessimistic studies have predicted to date. …Southeast Louisiana — with an average elevation just three feet above sea level — has long been considered one of the landscapes most threatened by global warming. That’s because the delta it’s built on — starved of river sediment and sliced by canals — is sinking at the same time that oceans are rising. The combination of those two forces is called relative sea-level rise, and its impact can be dramatic….” 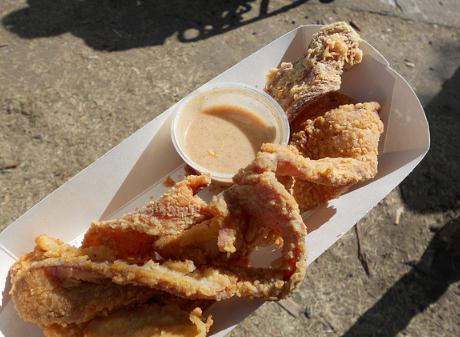 32 Reasons Why Minnesota Has The Greatest State Fair In The Country. Hey, it’s not just me waving the flag; this comes from buzzfeed.com. I just happen to agree (that’s chicken fried bacon above – comes with a cardiologist). 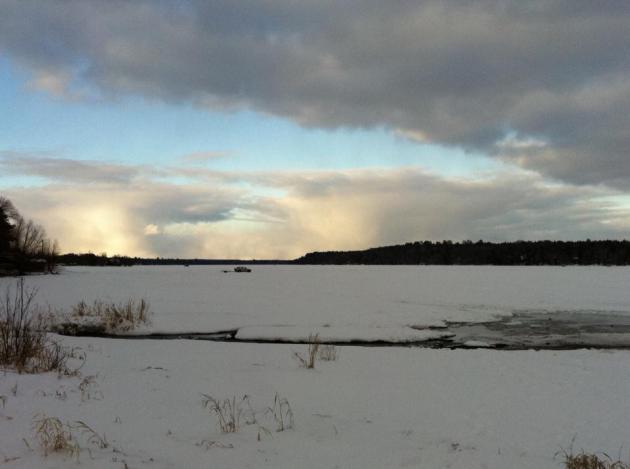 * photo above courtesy of Tim Wright. 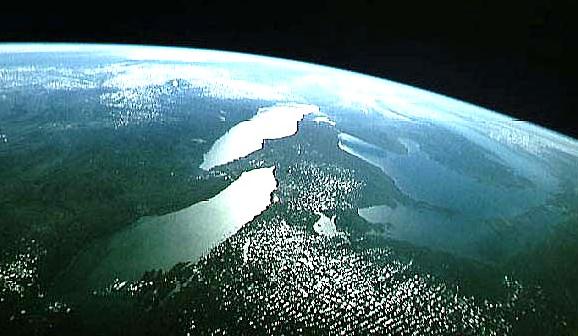 “Climate Change Lowering Great Lakes Water Level”. Here’s a snippet of a story at Mlive.com that caught my eye: “…One thing I hear is, ‘This is all caused by drought,’” Gauthier told a room of about 40 people. “Don’t let people tell you this is caused by drought. We are in climate change. “There’s no politics here.” He said the lake’s current condition represented “a whole different paradigm.” “The last time the water was this low for this long was the Dust Bowl,” Gauthier said of the 1930s-era ecological event. He talked about the consequences of the low lake levels. Those include freighters which carry lighter loads, the reduction in hydraulic water power at sites such as Niagara Falls, impacts on the fishing industry, decreased recreational boating and collapsing seawalls…”

Study: Gas Taxes Are Six Times As Effective As Stricter Fuel-Economy Standards. Here’s an excerpt of an article at The Washington Post: “What’s the best way to curtail gasoline consumption? Economists tend to agree on the answer here: Higher gas taxes at the pump are more effective than stricter fuel-economy standards for cars and trucks. Much more effective, in fact. A new paper from researchers at MIT’s Global Change program finds that higher gas taxes are “at least six to fourteen times” more cost-effective than stricter fuel-economy standards at reducing gasoline consumption. Why is that? One of the study’s co-authors, Valerie Karplus, offers a basic breakdown here: Fuel-economy standards work slowly, as manufacturers start selling more efficient vehicles, and people retire their older cars and trucks. That turnover takes time. By contrast, a higher gas tax kicks in immediately, giving people incentives to drive less, carpool more, and buy more fuel-efficient vehicles as soon as possible…”