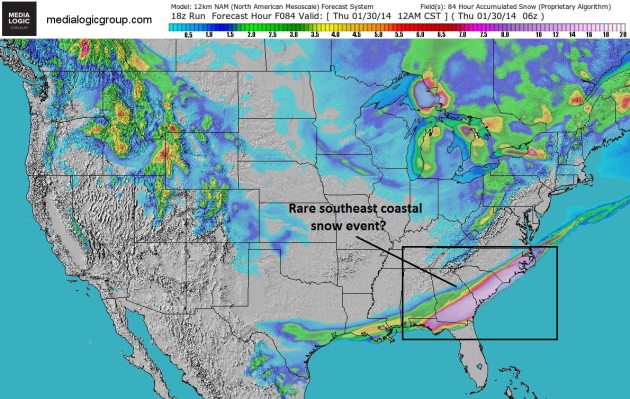 Ski Savannah? The leading edge of one of the two coldest airmasses of winter may spin up a storm capable of rain changing to snow from near Pensacola to Augusta, Savannah, Charleston and Wilmington, even a few inches of slush – enough to snow and shovel. Do people living there even own shovels. NAM guidance: NOAA and Ham Weather.

A Cold Kink In The Jet Stream. Instead of seeing a “progressive” weather pattern, where the jet stream varies over time, pulling in a mix of mild and cold, weather systems have stalled, the steering winds aloft temporarily locked in a pattern favoring record warmth and drought from the western USA to Alaska, and polar air vectoring due south, invading much of the central and eastern USA. 2-meter NAM temperatures out 84 hours from NOAA and Ham Weather. 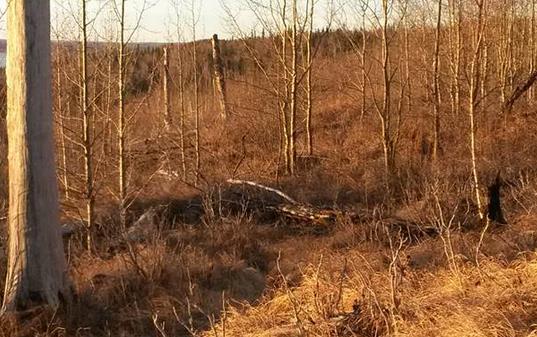 Still Waiting For Winter In Alaska. 60s with no snow in Alaska’s Kenai Peninsula. Freakishly springlike, while much of the north central USA shiver into Tuesday. Details below.

* I still don’t see a major storm, certainly no blizzard for Super Bowl Sunday on February 2, 2014.
* Latest models hint at a possible rain/snow shower Sunday morning, with clouds lingering most of the day – but I expect a drying trend during the PM hours Sunday at MetLife Stadium, temperatures falling through the 30s with west winds at 10-15 mph.
* New York City will get a taste of the polar cold, but temperatures moderate somewhat by next weekend, closer to average.
* Right now I don’t expect any major transportation challenges the Friday before the big game, but a light rain/snow mix may create some (minor) slushy issues Saturday. What has changed since yesterday? Models bring a rain/snow mix into metro New York during the day Monday. Getting out late Sunday or first thing Monday might be a prudent plan, reducing the risk of delays, until the pattern crystallizes we want to err on the side of safety and caution. 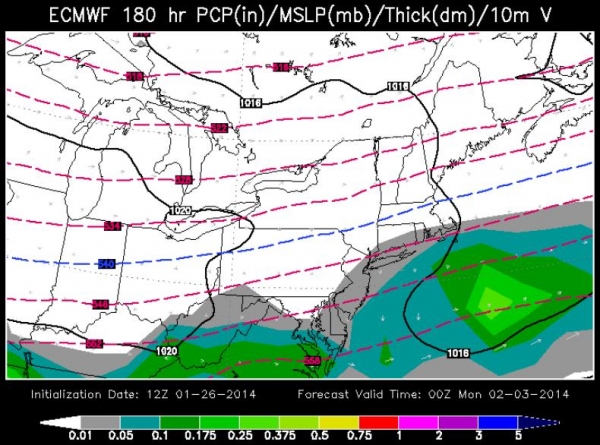 Sunday Evening Weather Map. This is ECMWF (European) model guidance, showing a cold rain offshore by Sunday evening, clouds lingering over East Rutherford, New Jersey, with a drying/cooling west to northwest breeze. It’s a little close for comfort, but assuming this guidance verifies I wouldn’t see any steady rain or snow for the game itself. Map above: WSI.

GFS Solution. NOAA’s GFS model suggests temperatures in the upper 30s midday Sunday, falling to near 30F by 8 PM Sunday evening, with a west breeze (and no steady/heavy precipitation).

Super Bowl Planner. Highs hold in the teens Tuesday and Wednesday, rebounding by the end of the week. Odds favor generally dry weather Friday, with a light rain/snow mix spreading into north Jersey Saturday. With surface temperatures in the low to mid 30s I expect most roads (and runways) to be wet, possibly slushy in spots, but no widespread travel headaches that I can see. An early shower Sunday should give way to drier conditions by afternoon and evening, although clouds will linger. High humidity levels will create a wind chill in the low to mid 20s, a bit raw at MetLife Stadium, but tolerable. The big unknown is whether the precipitation forecast for Monday, February 3, is real, or a computer artifact. I could see a better chance of traffic delays with wet snow the Monday after the Super Bowl. Graph: Weatherspark.

Summary: Although not quite as mild as yesterday’s solution, I have high confidence that temperatures will be in the 30s for the Super Bowl, with moderate confidence of no steady/heavy rain or snow. A snow shower can’t be ruled out during the morning and midday hours next Sunday, but skies will probably dry out during the afternoon and evening hours. Getting in Friday shouldn’t be a problem, some delays possible Saturday with a light mix of rain/snow pushing into metro New York, another chance of (mostly) snow the Monday after the game.

This is still a 7-Day forecast, so overall confidence levels remain low. I want to be transparent about setting weather expectations, knowing the forecast will invariably change as new data comes in. But right now I do not see any blizzards or major storms on February 2 in the New York City area that would have a high impact on travel or events. Stay tuned… 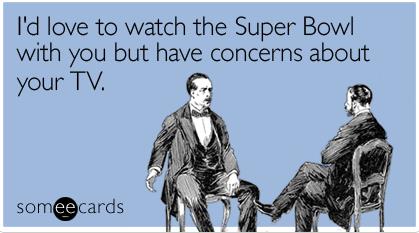 New York Area Weather Has A History With The Super Bowl. Check out weather for previous games in the NYC area in early February. From the sublime to the horrific, as reported by The New York Times; here’s an excerpt: “In the countdowns to each of the previous 47 Super Bowls, the primary question was, quite simply, Which team will win? But as Denver and Seattle await XLVIII next Sunday at MetLife Stadium in East Rutherford, N.J., questions about the weather for the first outdoor cold-climate Super Bowlhave upstaged even the point spread. How cold will it be? How windy? If it snows or rains, how much and when? Before the game? During the game?.…” 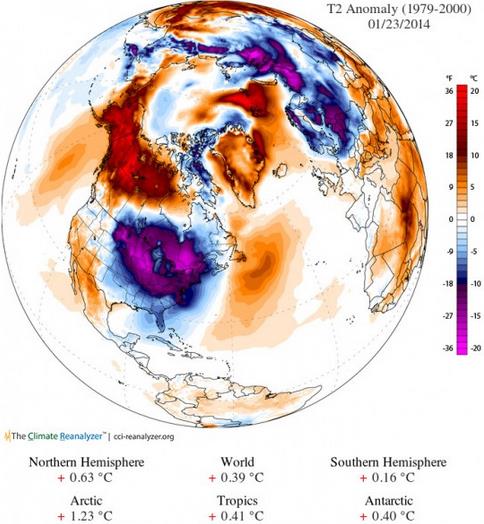 The Alaskan Winter That Never Was? Greg Laden takes a look at historic warmth (and lack of snow) across portions of Alaska at scienceblogs.com: “…I had heard it was warm in Alaska, but holy moly, I didn’t know it was THIS warm. Above is an anomaly map showing the Drunken Arctic Air in central and eastern Canada and the US in contrast with the very (relatively) warm air over western Canada and Alaska. Remember, these are anomalies, not absolute temperatures. But still, it is warm enough in at least parts of Alaska that lakes that are normally well frozen by now are not frozen at all and may not even freeze this winter. Here are photographs taken by A.M.Mueller on January 25th 2014 in Skilak Lake, Kenai Peninsula, Alaska, and passed on for posting, with some commentary.…” 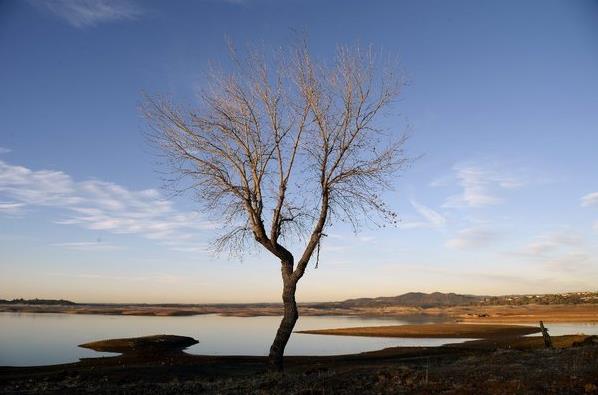 California’s Drought, Time Three. Here’s an excerpt of an Op-Ed at The Los Angeles Times: “…Because these three droughts are interconnected, we rarely suffer from one without dealing with the others, and this year’s situation is no different. The vast majority of Californians rely on water that falls in other parts of the state, or even outside the state, and although the multiple sources make water more secure for all of us, shortages usually come all at once. Southern California must prepare for the future by recapturing more of the rainwater that in wetter years still runs, unused, to the sea. It must do even more than is already being done to clean and reuse urban water...”

Photo credit above: “Seen above on Tuesday, a tree that is usually at the banks of Folsom Lake outside Sacramento is now several hundred feet away from the water. In his drought emergency declaration, Gov. Jerry Brown asked Californians to cut their water usage by 20%.” (John G. Mabanglo / EPA). 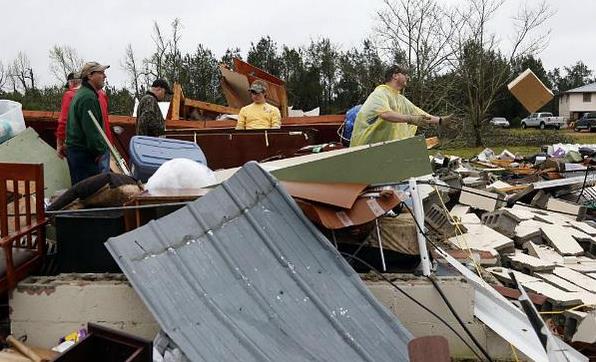 Better Setting Tornadic Expectations: From “Slight” to “Enhanced” Risk. The take-away; a “slight risk” day, as defined by NOAA SPC, can still generate significant, life-threatening tornadoes. Here’s a clip from a story at The Christian Science Monitor: “…For several years, the National Weather Service has been working with social scientists to find better ways of communicating the contents of its forecasts in ways meaningful to emergency managers, radio and TV weathercasters, and the general public, not just experienced forecasters, notes John Ferree, the SPC’s severe-storms services leader. But the “slight” category for severe storms and for tornadoes actually spans a threefold increase in risk, from a 5 percent chance of severe weather to a 15 percent chance, he notes. At 15 percent, the risk for severe weather is considered moderate...”

Photo credit above: “Shuqualak, Miss. residents clean up debris after a tornado plowed through rural sections of eastern Mississippi in April 2013. The Storm Prediction Center plans to broaden its warning system for severe weather after finding the days labeled as “Slight Risk” turned out to have storms that could be deadly.” Rogelio V. Solis/AP. 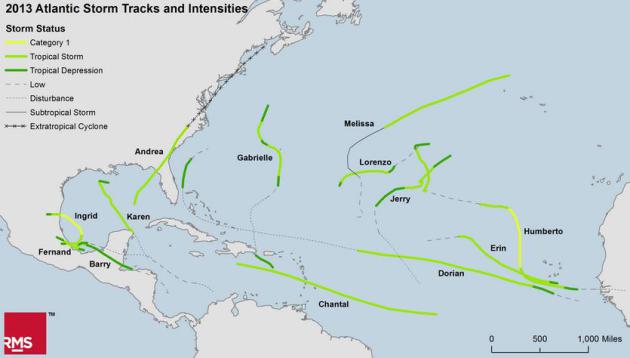 Researchers Digging Into Data On Quiet Hurricane Season. Last year’s hurricane prediction was a bust – it was the quietest year in the Atlantic since 1982. What happened, and can a long-range hurricane forecast even be trusted? Here’s a clip from a story at The Coloradoan: “…Gray and Klotzbach believe a significant cooling of waters in the eastern Atlantic associated with a weakening of the thermohaline circulation — or the Atlantic Multidecadal Oscillation — in the spring months was the primary reason for the inactivity. But there are significant disagreements between historical datasets about the conditions of the atmosphere during the June-November hurricane season…” 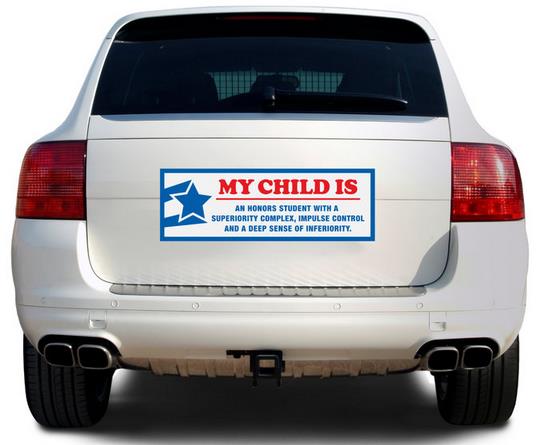 What Drives Success? Everyone wants shortcuts and easy-to-digest TV-soundbite answers; it turns out the answer is a little more complex. Here’s an excerpt of a fascinating read at The New York Times: “…It turns out that for all their diversity, the strikingly successful groups in America today share three traits that, together, propel success. The first is a superiority complex — a deep-seated belief in their exceptionality. The second appears to be the opposite — insecurity, a feeling that you or what you’ve done is not good enough. The third is impulse control. Any individual, from any background, can have what we call this Triple Package of traits. But research shows that some groups are instilling them more frequently than others, and that they are enjoying greater success...” (Photo credit: Ji Lee). 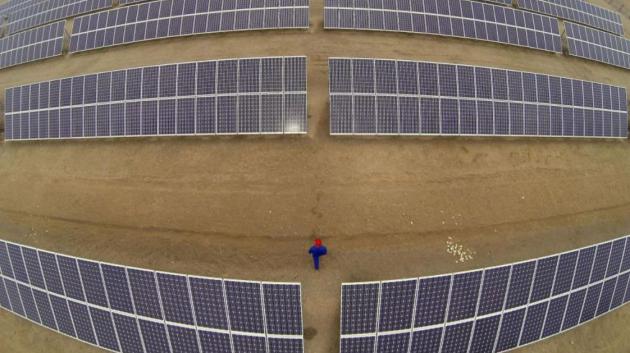 China Installed More Solar Panels In 2013 Than Any Other Country Ever Has.Quartz has the story – here’s the intro: “China is now home to more solar panels than any other country, after installing 12 gigawatts of solar panels in 2013, according to Bloomberg New Energy Finance. That’s equal to the total amount of panels in the entire United States, and more than any country has ever added in a single year. Greenpeace estimates the figure is a bit lower, but still record-breaking, at between 9.5 and 10.7 gigawatts…”
Photo credit above: “Harnessing the power of government subsidies.” Reuters/Carlos Barria 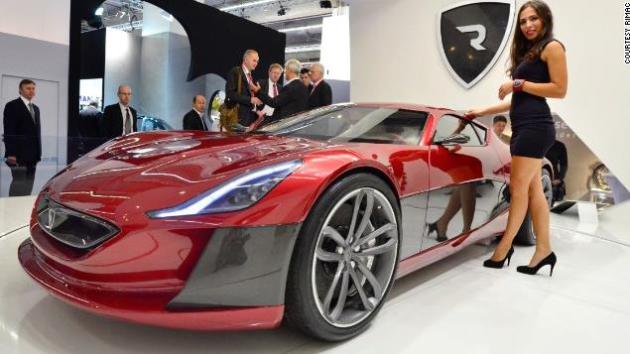 Get Ready For A Shock: The World’s Fastest Supercar Might Soon Be Electric. For a cool million and change this can be yours! CNN has the details on the Concept_One; here’s a clip: “At full speed, the Rimac Concept_One is little more than a cherry red blur, flashing from one corner of the horizon to the other in the blink of an eye. If its projected performance figures prove to be true, this radical electric concept car — the brainchild of an award-winning young Croatian designer — could accelerate faster than all but two of the fastest supercars on earth. The Rimac Concept_One’s figures are impressive. Not just for an electric car, but for traditional petrol-engine cars as well...” 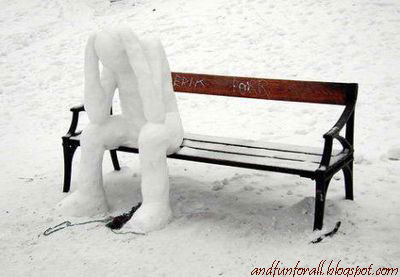 One response to “Another Polar Punch (accumulating snow Gulf and Southeast Coast by midweek?)”