23 May 2013, 7:07 am
Share:
Tornado Aware
Our hearts go out to residents of Moore, Oklahoma, recovering from the 3rd violent tornado in 14 years. Talk about bad luck.
Minnesota has experienced 2 EF5 tornadoes since 1950. No, we don’t live in traditional Tornado Alley but we do live in Tornado Cul de sac. EF4 tornadoes ravaged parts of the metro in 1965. Since then the MSP metro has expanded. Urban sprawl is relentless. Future tornadoes that would have hit farmland 20 years ago may plow into neighborhoods, undeterred by buildings, asphalt and concrete.
What keeps me up at night? The specter of another EF4 dropping in the close-in suburbs. Doppler radar helps with detection, but technology isn’t foolproof; there’s still no way to predict, in advance, how severe a tornado will become.
Practice a tornado drill with your family; invest in a NOAA Weather Radio and smartphone apps. Have a plan, just in case.
Spring stages a minor comeback today with badly-needed sunshine. Showers return Friday night, a few T-showers Sunday as warmer air pushes north. Memorial Day looks like the best day: 70s with some sun. 80s return next week; a shot at 90F by Thursday. Next week may be ripe for a few severe thunderstorms.
Yes, we’re due.

An Ill-Timed Warm Front. Warm air can’t just push cool air out of the way – cool air needs to retreat on it’s own. The GFS model above suggests a bit of a pushing and shoving match taking place in the skies above Minnesota and the Upper Midwest this weekend; scattered showers and T-storms – Memorial Day probably the mildest day of the 3 day weekend. 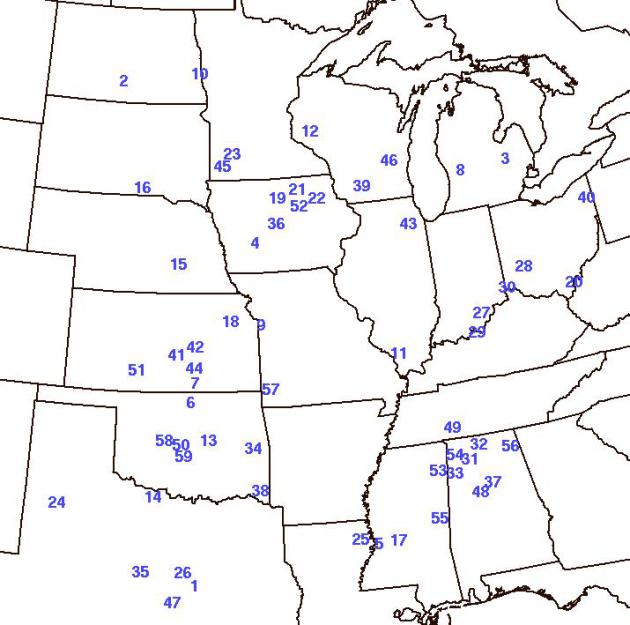 How Rare Are EF5 Tornadoes? Since 1950 there have been only 59, two in southwest Minnesota. The Moore, OK tornado was considered an EF5 with winds up to 210 mph. There were 6 in 2011; including the Joplin, MO tornado that occurred 2 years ago – May 22, 2011. According to Wikipedia the Joplin, MO tornado was the 7th deadliest (162 people died) and the costliest ($2.8 billion) single tornado in U.S. history. Map above showing the location and year EF5 tornadoes struck courtesy of NOAA SPC. 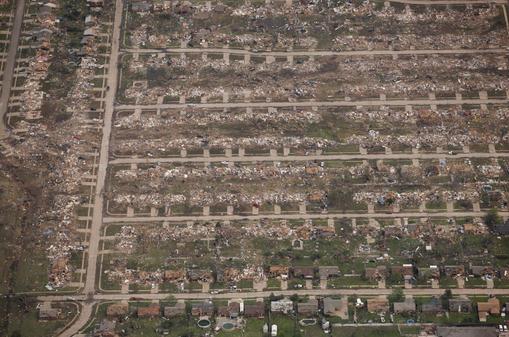 Moore In Bulls-Eye Twice; Science May Know Why. Here’s an excerpt from a story at CNN.com: “…Dallas-Fort Worth, Kansas City and St. Louis are also considered high risk for severe tornadoes, according to Harold Brooks of the National Oceanic and Atmospheric Administration’s Severe Storms Laboratory in Norman, Oklahoma. Yet, none of those metro areas has been through what Moore has experienced. Monday’s storm caused enormous property destruction and killed at least two dozen people. Yet it was a relatively ordinary violent tornado,” according to Brooks, an acknowledged expert on the climatology and probability of twisters…”

Photo credit above: “An aerial view of the extensive damage caused by Monday’s tornado, near Oklahoma City and Moore, Okla., May 21, 2013. Oklahoma officials said they hoped to finish their search for survivors of a massive tornado by nightfall, a little more than 24 hours after the Oklahoma City area was slammed by a storm that killed dozens of people.” (Matthew Staver/The New York Times).

What Happens When A Tornado Hits? Here’s an excerpt of an interview I gave to Chris Hayes on MSNBC Monday evening, describing the dynamics of an EF4/EF5 tornado. 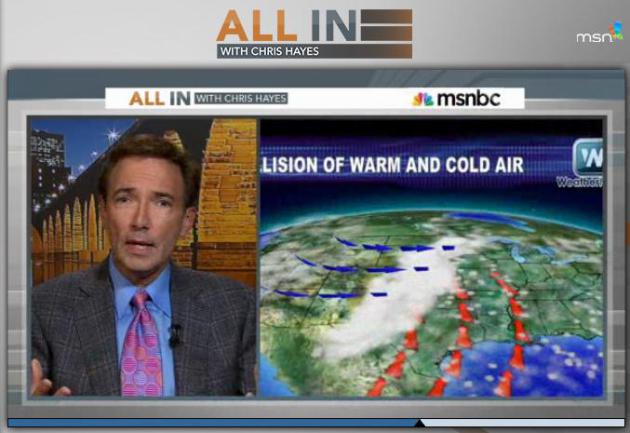 A Tornado Isn’t An Object, But Rather A Process. Tuesday night I had a chance to explain how tornadoes form, the physics able to translate spin around a horizontal axis into a vertical axis (with the help of some great special effects). Here’s the video clip from “All In With Chris Hayes” on MSNBC. My segment is about 8:00 in.

When Tornadoes Are A Way Of Life. Here’s an excerpt of a radio interview I gave to Jennifer Ludden at NPR’s Talk of the Nation on Tuesday: “…I think one of the issues that we have in this country is a certain degree of tornado fatigue. Seventy percent of all tornado warnings, Jennifer, are false alarms, you know? Nobody wants to get caught with their Doppler down. So any time we see rotation in a thunderstorm, the temptation is to issue the warning. But in the process, we’re all kind of bombarded with warnings. You start to tune out. And on a day like yesterday, you need to break through the clutter and the apathy and the cry-wolf syndrome and shape people viscerally and emotionally. And the words that you chose – I think any sociologist will tell you the words you choose are critical in conveying that level of risk. At one point, Mike Morgan actually said: If you don’t have an underground shelter, this tornado is unsurvivable. Get into your vehicle, try to drive away – which you never, ever hear. And yet, that was the magnitude of the tornado threat yesterday. The problem is with tornados, we don’t know right away if it’s an EF1 or an EF4...” 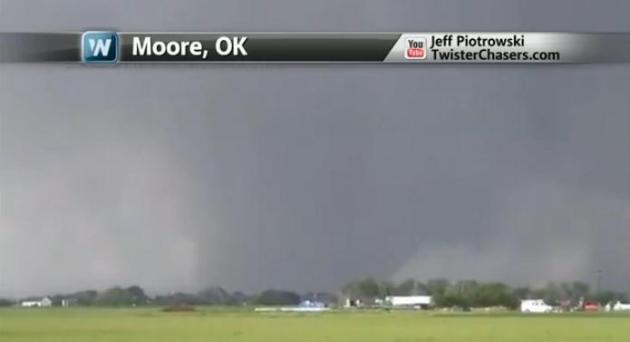 Tornadoes And Urban Sprawl: How Long Until A Major City Is Hit? Oklahomans know exactly what to do when a major tornado is approaching, living at Ground Zero of Tornado Alley. But what happens when a similar (extreme) tornado hits a major city or densely populated suburb? We’re not even close to being ready for that scale of weather disaster. Here’s a link to a video from WeatherNation TV: “Meteorologists Paul Douglas and Susie Martin look at the severe threat for the coming days, as well as the statistics and the role urban sprawl has when it comes to the risk of a strong tornado hitting a major city.” 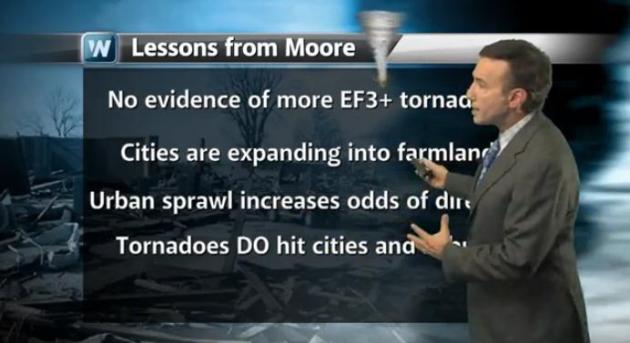 Lessons From Moore Tornado Disaster. In today’s edition of Climate Matters I take a look at some of the implications of the Moore EF-5 tornado, including situational awareness, multiple information safety nets, and why you need to REALLY pay attention the next time a “Tornado Emergency” is issued for your area. 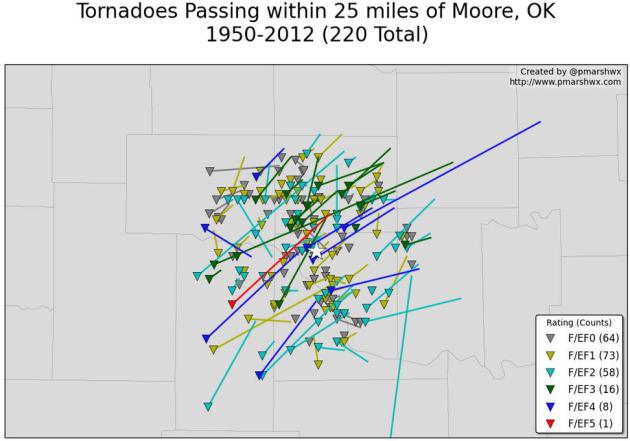 A Staggering Statistic. Meteorologist Patrick Marsh calculates that 220 tornadoes passed within 25 miles of Moore, Oklahoma from 1950 to 2012. Good grief. 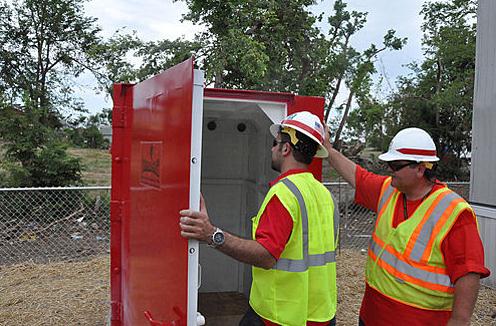 The Rise Of DIY Tornado Shelters. Do you really need to spend thousands of dollars to retrofit a closet into a steel and concrete-reinforced “safe room”, able to withstand even an extreme tornado? There may be some things you can on your own. Here’s an excerpt of a timely story from AccuWeather.com: “…Homes without storm cellars or basements offer little protection from a tornado. While windowless rooms and closets offer more safety than other parts of the house, people are still left vulnerable to tragedy when storms strong enough to level entire structures come through. Storm shelters are built to withstand winds that standard household rooms are not equipped to handle. There have been cases of safe rooms remaining completely intact, protecting the people inside, as the entire building around it crumbles to the ground in a tornado. As people try to prepare for the worst, companies that produce do-it-yourself storm and tornado shelters are reporting a sharp increase in sales…” 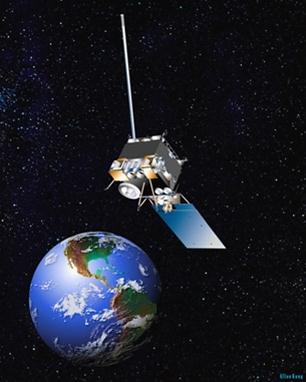 NOAA Satellite Malfunctions; May Affect Forecasts. This is not a good development. Meteorologist Andrew Freedman at Climate Central has the story; here’s an excerpt: “As the weather system that spawned the deadly Moore tornado moves eastward, the main weather satellite used for observing and forecasting conditions across eastern North America and the Atlantic Ocean has gone offline. It’s the second malfunction since September 2012, when a technical glitch was fixed by engineers working from the ground. According to the National Oceanic and Atmospheric Administration (NOAA), which operates the nation’s fleet of weather satellites, the satellite, known as GOES-13, initially malfunctioned at 11:40 p.m. eastern time on Tuesday. An initial recovery procedure was unsuccessful at restoring it to operation…”

Beer Warning. If this web site doesn’t make you thirsty, I don’t know what will. It’s a Minnetonka, MN company with a marketing hook that is sure to get people interested, especially meteorologists. Come to think of it my doctor tells me I’m not drinking enough good beer. 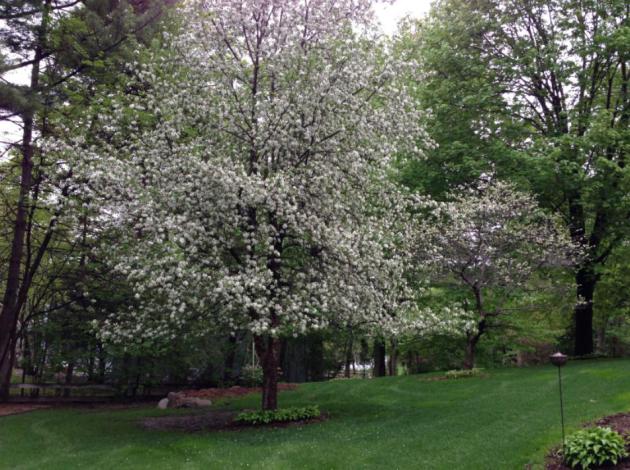 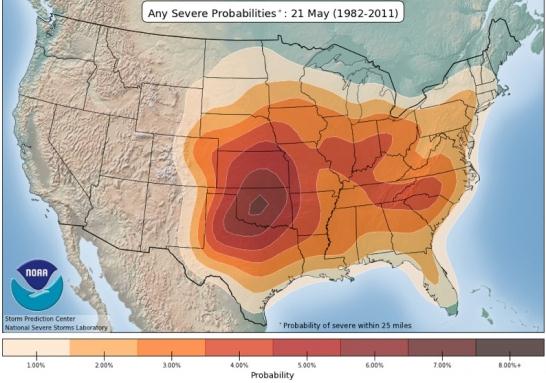 Making Sense Of The Moore Tornado In A Climate Context. Climate Central meteorologist Andrew Freedman does a good job connecting the dots; here’s an excerpt: “…Tornado data does not reveal any clear trends in tornado occurrence or deaths that would suggest a clear tie to global warming, at least not yet. A recent paper published in the Bulletin of the American Meteorological Society found that the occurrence of EF-1 and stronger tornadoes on the Enhanced Fujita Scale has shown no trend since 1954, which was the first year of near real-time data collection. Instead, an increase in tornado counts of EF-0 or stronger tornadoes has been attributed to an uptick in observations of very weak tornadoes. The Enhanced Fujita Scale measures tornado strength based on the extent and type of damage that they cause (no surface weather station has ever survived a direct tornado strike to take wind measurements from inside a twister)…”

Graphic credit above: “Probability of severe thunderstorms within 25 miles of a location as averaged from 1982-2011. This shows the highest odds of severe weather on Monday were in Oklahoma.” Credit: Storm Prediction Center. 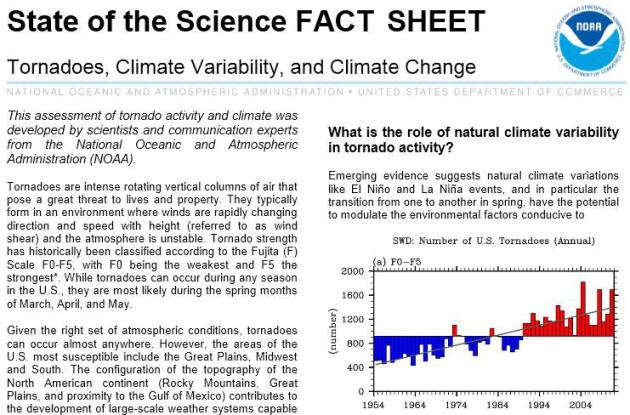 Tornadoes, Climate Variability and Climate Change. NOAA has a fact sheet on what we know, and what we don’t know, regarding tornado frequency and intensity in a warming atmosphere. Here’s a link to the PDF. 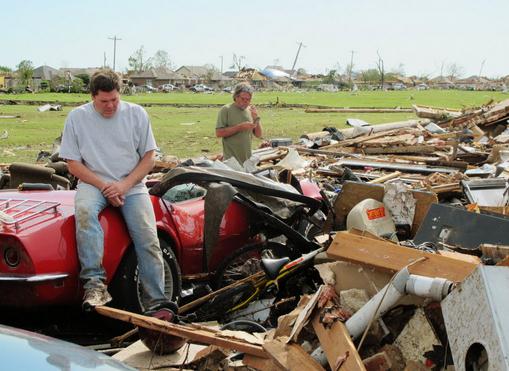 Seeking Clarity On Terrible Tornadoes In A Changing Climate. Here’s an excerpt of an Andy Revkin article at The New York Times: “The vulnerability is almost entirely the result of fast-paced, cost-cutting development patterns in tornado hot zones, and even if there were a greenhouse-tornado connection, actions that constrain greenhouse-gas emissions, while wise in the long run would not have a substantial influence on climate patterns because of intertia in the climate system. Some climate scientists see compelling arguments for accumulating heat and added water vapor fueling the kinds of turbulent storms that spawn tornadoes. But a half century of observations in the United States show no change in tornado frequency and a declining frequency of strong tornadoes…”

Photo credit above: “Billy McElrath, left, sits on a 1968 convertible Corvette buried under rubble in what was the garage of his home in Oklahoma City on Tuesday, May 21, 2012. The residents of Moore, Okla., affected by a deadly tornado, are coming back to find their belongings scattered and their homes left in pieces.” (AP Photo/Sean Murphy)

Why Rational People Buy Into Conspiracy Theories. I thought this was interesting – here’s a clip from a New York Times story: “…While psychologists can’t know exactly what goes on inside our heads, they have, through surveys and laboratory studies, come up with a set of traits that correlate well with conspiracy belief. In 2010, Swami and a co-author summarized this research in The Psychologist, a scientific journal. They found, perhaps surprisingly, that believers are more likely to be cynical about the world in general and politics in particular. Conspiracy theories also seem to be more compelling to those with low self-worth, especially with regard to their sense of agency in the world at large. Conspiracy theories appear to be a way of reacting to uncertainty and powerlessness…”