Powerful Coastal Storm for the Northeast Later This Week
Clipper System Creates Snow From the Plains to the Mid-Atlantic
More Snowfall Moving From Montana To Colorado Today
Tracking the Cold Impacting the U.S.
Freezing Fog in the Plains Finishes Up
NFL Conference Championship Football Forecasts
All Weather News 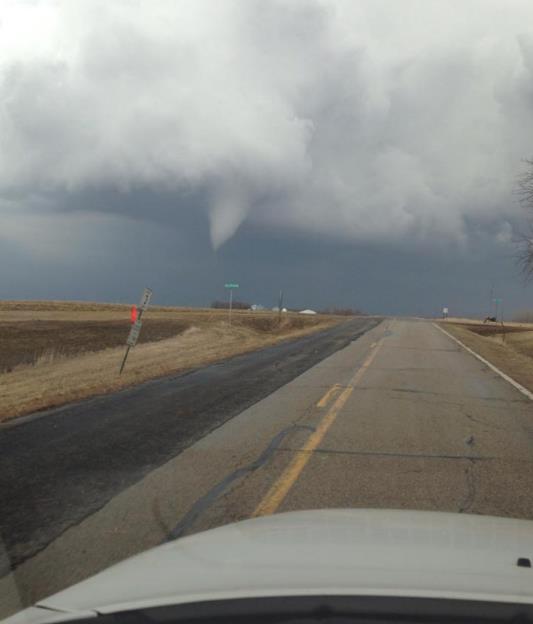 Blizz-nado?I’d like to lock Mother Nature in my basement and throw away the key. March came in like a polar bear and went out like a (rabid) mountain lion, with blizzard conditions over the Red River Valley yesterday, but that wasn’t the most unusual feature of yesterday’s weather map.In 40 years of tracking the weather I have NEVER seen a tornado warning and a blizzard warning in effect (simultaneously) for the same county. That happened yesterday in Yellow Medicine county; tornadoes moving at 40 mph causing structural damage near Saint Leo – the county under a blizzard warning for high winds and snow expected to move in Monday night. A new level of weather-whiplash. A new level of bizarre.Whispers of the Polar Vortex return today as cold exhaust shakes the trees outside your window – a coating of slush possible in the metro; a few inches of snow for Brainerd. But we all realize that spring in Minnesota is always two steps forward, one step back.A clumsy atmospheric waltz.No more 60s in sight anytime soon, in fact heavy jackets linger into late week with a few days in the 30s and low 40s. It’s premature to toss around inches, but there may be enough cold air in place for a slushy snow event by Friday. But even if it does snow a high sun angle guarantees rapid melting, with 40s returning next week, even a shot at 50F.If anyone asks the average high reaches 65F in the Twin Cities by the end of April. Extended models show a cool bias. We won’t be boating anytime soon.Longer term an El Nino is brewing; warmer Pacific water which often correlates with milder winters here. That’s more of a prayer than a forecast by the way. But we go from one extreme to the next.Maybe we’ll catch a break.* photo of tornado near Minneota Monday afternoon courtesy of Ronni Vlaminck and KARE-11. 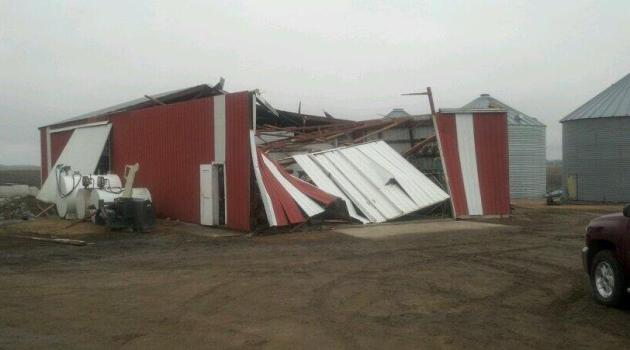 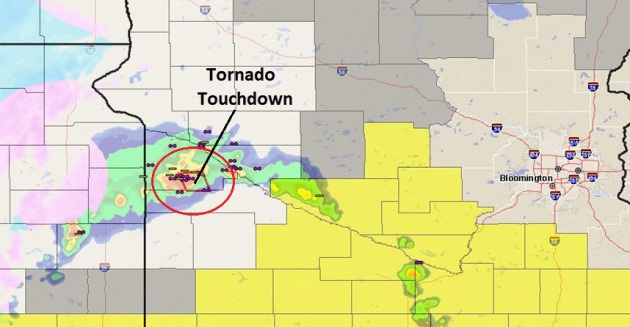 Taking Weather Whiplash to a New Extreme. Tornado warnings issued for a county under a Blizzard Warning? True, blizzard conditions weren’t expected until Monday night, and convection whipped up in the “dry slot”, a surge of warm, dry air that pushed into southwest Minnesota, resulting in highs in the 70s, a sharp temperature gradient and subsequent low-level wind shear that spun up a couple of small tornadoes. (Map: Earth Networks).

“Hey Paul, I have a question. Have you ever seen a confirmed tornado (Warning) in the same place where a Blizzard Warning is also in effect? Hard to believe my eyes right now. Then again in Wisconsin yesterday there was elevated fire danger in the same areas where rivers were flooding. What could possibly be ahead??? Cue the locust.”Kent SmithEden PrairieShort answer? No. 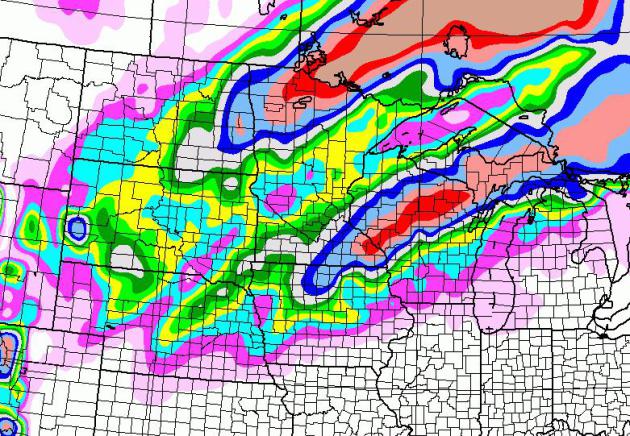 Too Early To Panic (Much). Again, I tend to go with “persistence”, which is a fancy way of saying go with the flow, don’t deviate from the current pattern and trends. Spring is taking it’s sweet time, with only a few tantalizing glimpses of real warmth. I’m not buying a major snowfall for Friday (yet) – I want to see a few more computer models and see if the solutions are consistent. But there’s certainly a potential for a “few inches” of slushy snow Thursday night into late Friday. GFS data shows the best chance of a hearty pile of snow south/east of the Twin Cities. Too early to say with confidence, but we’ll keep an eye on it. Feeling lucky? 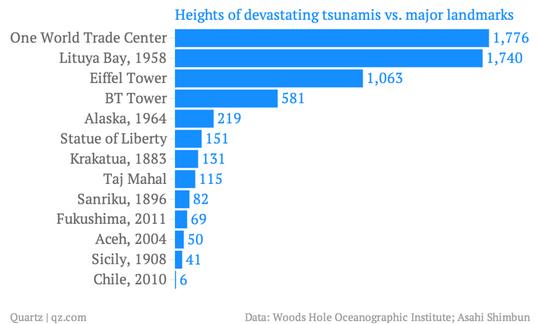 A 1,720 Foot High Tsunami? I thought it was a typo at first, but apparently not. Good grief. I’m feeling better about being near the center of the North American continent. Here’s an excerpt from an eye-opening account at Quartz: “…Calamity struck at 10pm on July 9, 1958, when a 8.0-Richter-scale earthquake rammed the Alaskan coast up and northward. That impact shook free between 40 million and 60 million cubic yards (30.6 million and 46 million cubic meters) of rock and ice that rimmed the Lituya basin, dumping it 3,000 feet into the bay below. The 1,720-foot monster that reared up as a result shot through the bay at 100 miles per hour (161 kilometers per hour), as Susan Casey details in her book, The Wave: In Pursuit of the Rogues, Freaks and Giants of the Ocean…”

Higher Probability Of El Nino By Summer of 2014. The threshold is .5C, and we should reach that in the Pacific as early as May or June. For a little light reading and more than you ever wanted to know about a brewing El Nino and ENSO in general, check out this 29 page PDF from NOAA NCEP. 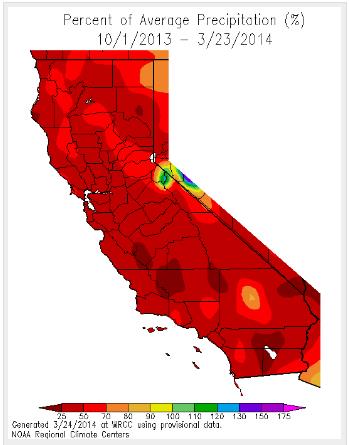 Update On California Drought. Residents of the western USA may be praying for a moderate to severe El Nino warming phase of Pacific Ocean water, which correlates with more frequent storms for California and a more active southern branch of the jet stream. Here’s a good summary of the deepening drought from Peter Gleick at scienceblogs.com. 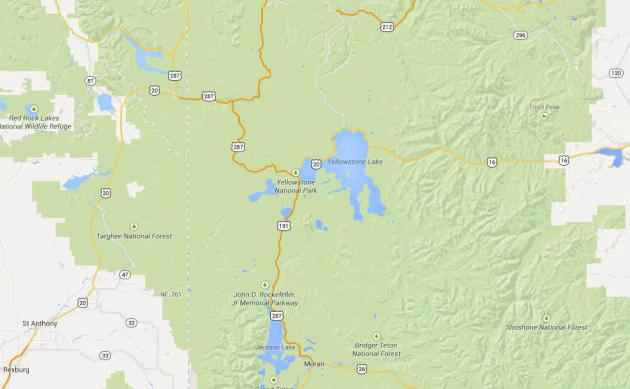 4.8 Magnitude Quake Hits Yellowstone. The tremor was reported on Sunday in an area riddled with earthquake faults – more details from earthsky.org. (Map: Google).

Parallel Parking In The Arctic Circle. If you missed Thomas Friedman’s latest Op-Ed in The New York Times it’s definitely worth a read – with a son in the Navy I found this especially fascinating. Here’s an excerpt: “…More important, you learn how crucial acoustics are when operating deep under ice with no vision and no GPS satellite to guide you. Or, as the New Mexico’s captain, Todd Moore, 40, put it: It’s like every day “engaging in a knife fight in a dark room: the only thing you can do is go after what you hear.” You can’t see the adversary. You can’t see the ice keels, but you can hear enemy subs, surface ships, whales, calving icebergs, schools of fish and bounce sound waves off them with sonar to measure distances…”Photo credit above: “The U.S.S. New Mexico broke through the ice 150 miles north of the North Slope of Alaska to pick up some passengers.” Credit Joshua Davies Communication Specialist 2nd Class/U.S. Navy Photo. 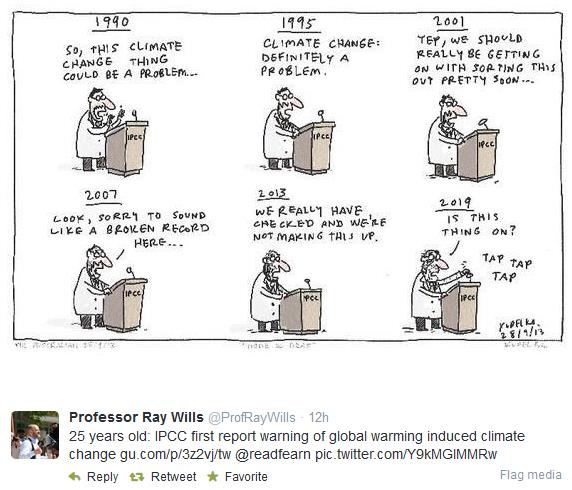 * “The Hellish Monotony of 25 Years of IPCC Climate Change Warnings.” Graham Readfern has the story at The Guardian.** Twitter cartoon credit here. 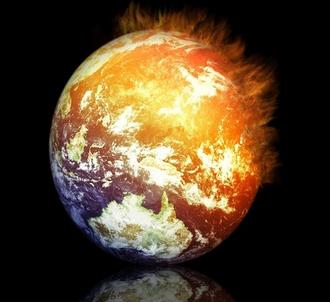 Panel’s Warning On Climate Risk: Worst Is Yet To Come. Justin Gillis has a good summary of the latest IPCC report in The New York Times; here’s an excerpt: “…The scientists emphasized that climate change is not just some problem of the distant future, but is happening now. For instance, in much of the American West, mountain snowpack is declining, threatening water supplies for the region, the scientists reported. And the snow that does fall is melting earlier in the year, which means there is less meltwater to ease the parched summers. In Alaska, the collapse of sea ice is allowing huge waves to strike the coast, causing erosion so rapid that it is already forcing entire communities to relocate. “Now we are at the point where there is so much information, so much evidence, that we can no longer plead ignorance,” said Michel Jarraud, secretary general of the World Meteorological Organization…”

MIT Scientist Responds On Disaster Costs And Climate Change. FiveThirtyEight has an article from hurricane expert Kerry Emanuel from MIT; here’s an excerpt: “…The increasing normalized trends in the U.S. were evident in convective storms, winter storms, flooding events and high temperature-related losses, and were almost statistically significant for hurricanes at the conventional 95 percent confidence level.3 In view of data like this, it’s very hard to accept Pielke’s confident assertion that “[n]o matter what President Obama and British Prime Minister David Cameron say, recent costly disasters are not part of a trend driven by climate change…”

Wake Up To The Reality Of Climate Change. Here’s an excerpt of an Op-Ed at CNNthat caught my eye, from former (Republican) Governor of New Mexico and U.S. Energy Secretary Bill Richardson: “…We are now witnessing how it is changing our world: The past winter was the eighth-warmest on record. For 348 consecutive months — 29 years — global temperatures have been above average. The latest IPCC report finds that impacts from climate change are “widespread and consequential” and they are being felt on every continent and in our oceans. The world last year experienced 41 weather-related disastersthat caused damages totaling at least $1 billion. Over the past decade, the western United States experienced seven times more large-scale wildfires than it did in the 1970s. Climate change has made it much more likely that we will suffer severe droughts like the one that recently swept across Texas and my home state of New Mexico…”