Hamden, Connecticut picked up an eye-watering 40 inches of snow from Saturday’s blizzard. It was a record snow for Portland, Maine (31.9); the 5th snowiest ever recorded in Boston (24.9). These extreme snows are possible if a) you live near an ocean, a major water source, or b) a blocking pattern causes storms to temporarily stall (1991 Halloween Superstorm).

With yesterday’s snow burst we’ve picked up roughly 30 inches inches in the metro; twice what we saw last winter. Is the drought over? No. Most of the snow in your yard won’t be able to soak into the (frozen) ground. Big, wet storms in early spring may set the tone for 2013. Will this be a drought year, or a tornado year? Too early to know.

No big storms are brewing close to home. Another clipper yanks chilly air into Minnesota by late week. But a higher sun angle is making a difference now. You won’t be nearly as numb as you were weeks ago. 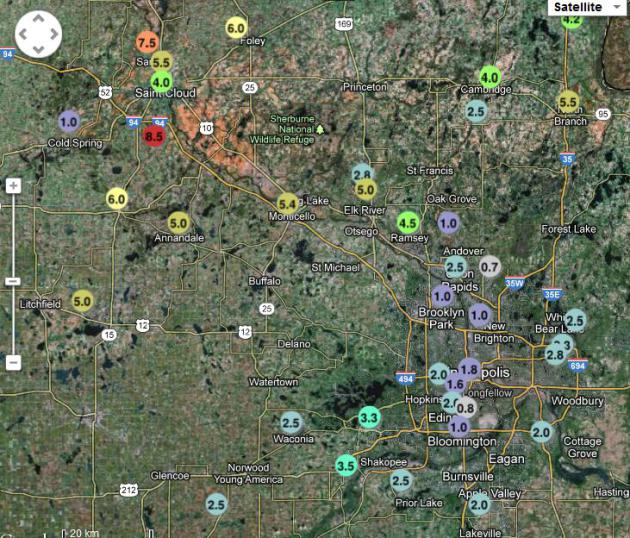 How Much Fell? If I had issued a forecast of 1-9″ snow back on Friday the men with the little white jackets would have come to take me to the Home For Wayward Weathermen. But that’s pretty much what happened: 1″ at New Brighton, as much as 8.5″ at St. Augusta in Stearns County. Over 3″ fell in the western suburbs, but most spots in the metro picked up 1-3″, as rain and sleet mixed in with the snow. More of a Marchlike slopstorm. Details at the local National Weather Service. 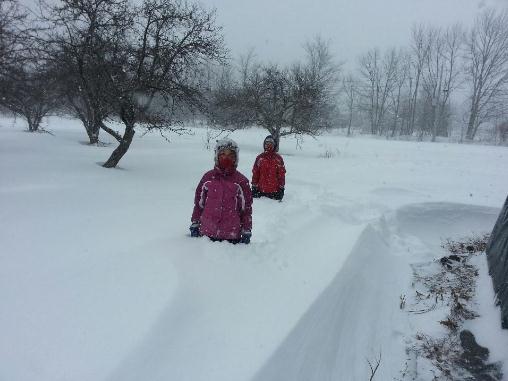 * State of Emergency in effect for the entire state of Connecticut. AP photo above.

* 20-30″ snowfall reports from Connecticut to Maine. 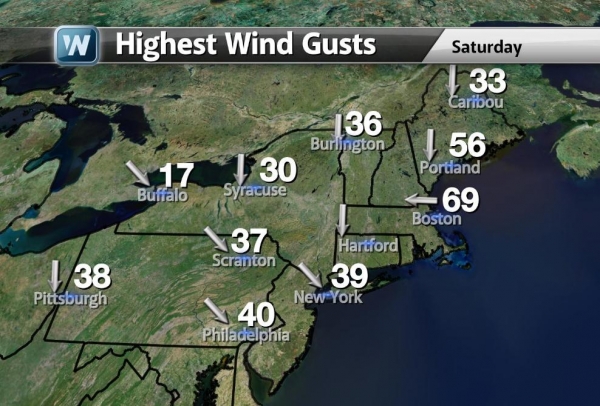 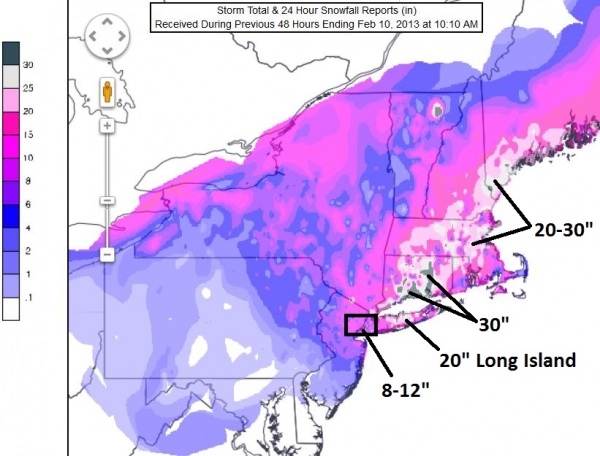 How Much Fell. As expected, New York City was on the southwestern edge of the most extreme snow bands, with generally 8-12″ reported. Over 20″ piled up on Long Island, as much as 30″ from Connecticut to Portland Maine, according to NOAA.

Record-Breaking. The weekend blizzard produced the greatest amount of snow ever recorded in Portland (31.9″) – the fifth heaviest snowfall for Boston, with 24.9″ reported. 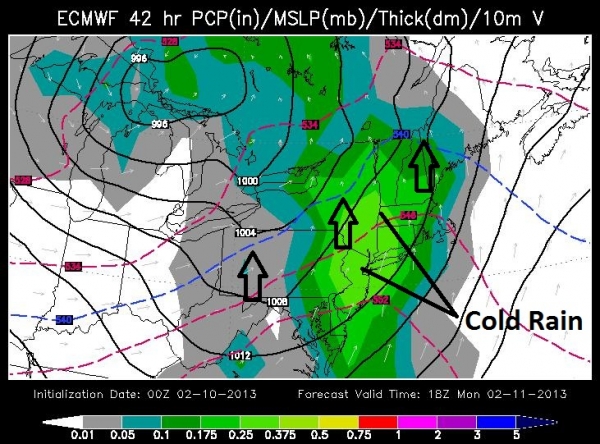 Monday Rain Event. The next system moving in tomorrow will bring a cold rain to much of the Northeast, accelerating snow melt, possibly resulting in minor flooding of intersections and poor-drainage areas (still clogged with snow). Expect a slushy, sloppy mess tomorrow and 2-5X commute times. ECMWF map above valid midday Monday courtesy of WSI.

More Fingerprints. Some say that no storm or event can be attributed to a warmer atmosphere or warmer sea surface temperatures, but here’s the scientific reality: climate change is flavoring all weather now. Winters are shorter, nationwide, but the storms that do spin up have a higher probability of being extreme. Why? Warmer air holds more water vapor, increasing the potential fuel for extreme snowfall events. It was just 2 years ago much of the East Coast endured “Snowmageddon”. This blizzard was another marker, evidence of our increasingly super-sized, weather-on-steroids environment. NOAA data shows water temperatures from the Carolinas to southern New England as much as 3-7 F. warmer than the 1980-2010 averages on February 7. Alarmist hype? I respond to data, not ideology, and what I’ve witnessed on the weather maps since the late 1990s leads me to believe that our weather patterns are, in fact, becoming more extreme over time. Forecasters are witnessing increased frequency and intensity of weather extremes, worldwide. Climate theory has become a meteorological reality. Here are more details in an article I wrote for Bloomberg.

Outlook. Much colder air will push into the Northeast in roughly 1 week. No more blizzards or severe outbreaks for the USA looking out one week. 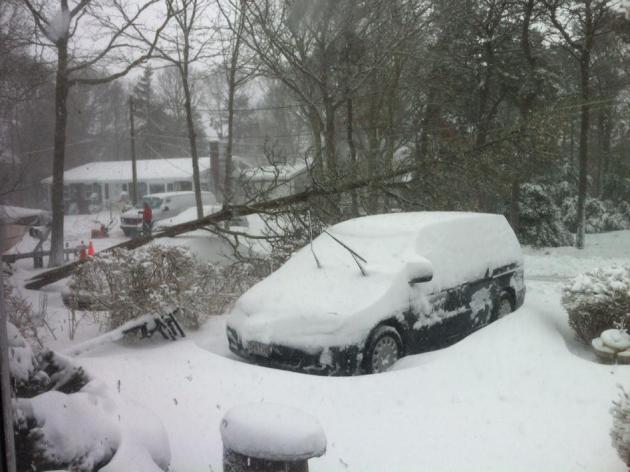 Snowbound. Stephanie from Hyannis, Massachusetts shared this photo of a small tree down on their minivan, after 18-24″ snow and 60 mph. wind gusts. She explained that her family had to crawl out of a window to get outside – there was too much snow blocking the front door! 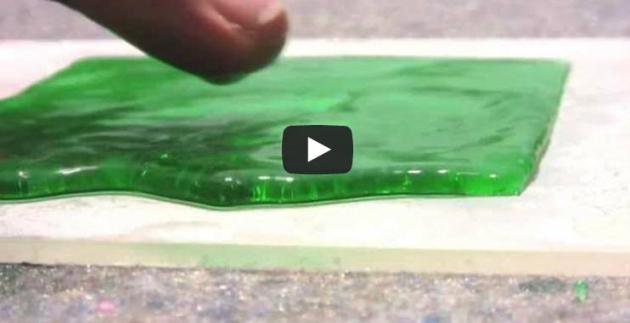 Next Time Your Mom Says Don’t Go Out In The Rain Spray Yourself With This. Nanotechnology? Robert Krulwich has an amazing article (and video) at NPR: “OK, this is an ad. I can’t vouch for it. I’m almost embarrassed to be showing it to you. But you have to take a look. When I saw it yesterday, I had to pick my jaw off the floor. This product, called “Ultra Ever Dry” is a nano-tech coating you can spray on any number of different surfaces, shoes, cinder blocks, coats. (Your hands? Probably not.) It’s superhydrophobic (it repels water) and oleophobic (repels hydrocarbons) — but words don’t do it justice…” 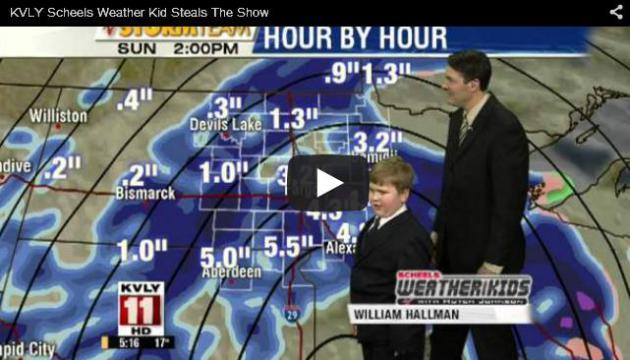 Future TV Meteorologist. If you haven’t checked out this video – you should. This kid has serious talent. Details (and video) courtesy of mashable.com: “Even if you’ve been overwhelmed with weather reports in the past 24 hours, here’s one you don’t want to miss. Not because it contains vital information ahead of a storm, but because it’s simply adorable and hilarious. Watch as 9-year-old William Hallman helps deliver the forecast for NBC affiliate station KVLY in Fargo, ND…” 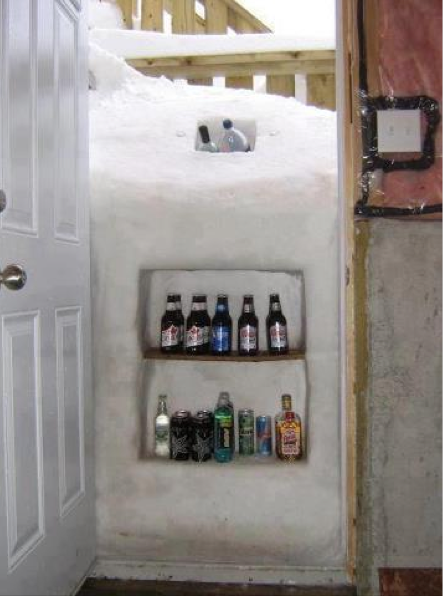 Creative Use Of A Blizzard. From an anonymous source on Facebook. Nice. 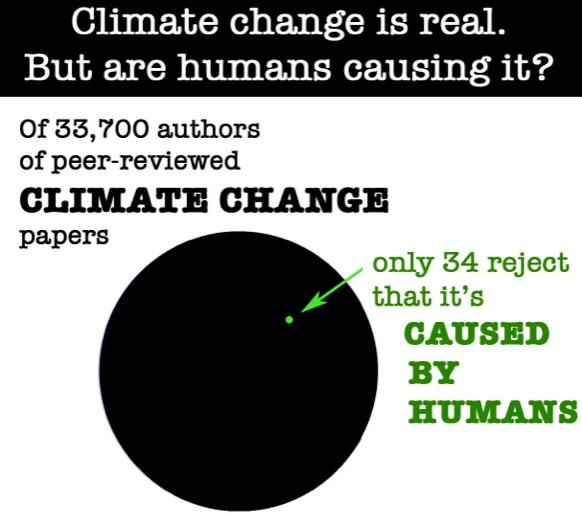 Climate Change And The Blizzard: Nor’easters More Fierce With Global Warming, Scientists Say. Did warmer sea surface temperatures (and thus the availability of more water vapor) turbocharge the blizzard? Professional climate science deniers scoff at the idea, but there’s sound science to back up the claim. Here’s an excerpt from Huffington Post: “Climate change may or may not have helped generate the nor’easter lashing the East Coast this weekend. Such storms happen with some regularity, after all. But the amount of snow the storm called “Nemo” ultimately dumps, and the extent of flood damage it leaves in its wake, may well have ties to global warming, climate scientists suggested. Michael Mann, a climatologist who directs the Earth System Science Center at Pennsylvania State University, compared a major storm like Nemo — or Hurricane Irene or Superstorm Sandy, for that matter — to a basketball slam-dunk with a lower net. “If you take the basketball court and raise it a foot, you’re going to see more slam-dunks,” Mann said. “Not every dunk is due to raising the floor, but you’ll start seeing them happen more often then they ought to…”

Climate Change Is Serving Up Doses Of Extreme Weather. Even In Winter. It’s basic physics: warmer air holds more water vapor, more potential fuel for major rainstorms (and snowstorms). If we reach the point where it’s too warm for midwinter snows from Minnesota to New England it’s game over; we’re truly living on a different planet, and no amount of technology, clean energy or political decrees will help. We’re not there yet. Here’s another perspective from The Daily Climate: “As the Northeast digs out from under a mammoth blizzard, it might seem easy for climate change skeptics to point to such intense storms as evidence that global warming isn’t real. They would be wrong. “Climate change contrarians and deniers love to cherry-pick individual events to argue that they are somehow inconsistent with global warming, when they are not,” said Michael Mann, director of the Earth System Science Center at Pennsylvania State University.  “As long as it’s cold enough to snow – which it will be in the winter – you potentially will get greater snowfalls….”