Holding Pattern. The jet stream has become locked in a pattern that favors warm, dry weather for the western USA, and colder than average weather from the Upper Midwest into the Great Lakes and New England, a persistent northwest flow east of the Rockies limiting how much moisture can bubble out of the Gulf of Mexico. The solid red line shows the 32F isotherm, pushing as far south as the Florida Panhandle. 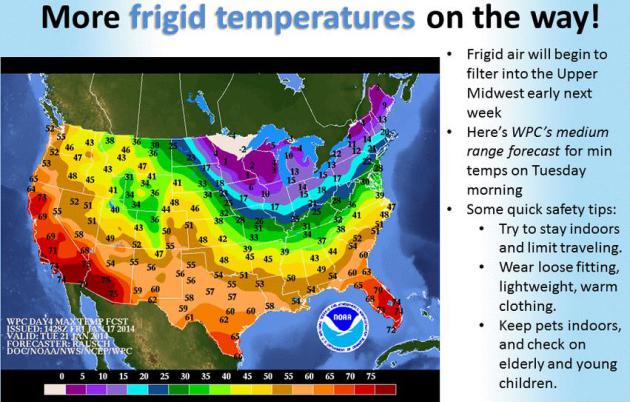 Cold, But Not Quite Polar. Next week’s shot will be cold enough to definitely get your attention, but not the school-closing cold of January 6-7. Graphic and information above courtesy of NOAA. 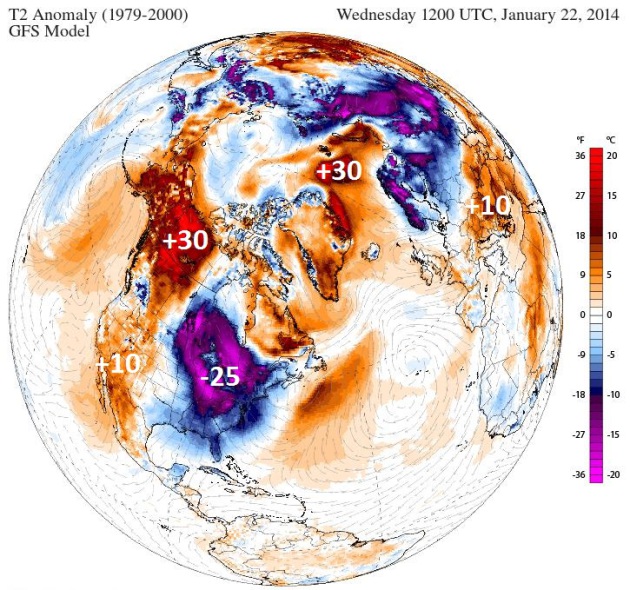 Temperature Anomalies Next Wednesday. Here is GFS guidance from NOAA, displayed on a very nice base map from Climate Reanalyzer, showing temperature departurnes from the 1979-2000 normals. You can’t miss the big cold bulls-eye from the Upper Midwest into the Great Lakes, New England and Ohio Valley, temperatures as much as 15-28F colder than average for late January. Meanwhile Alaska, western Canada, Greenland and a big chunk of Europe and Asia are forecast to be considerably warmer than average. Whatever happened to average? 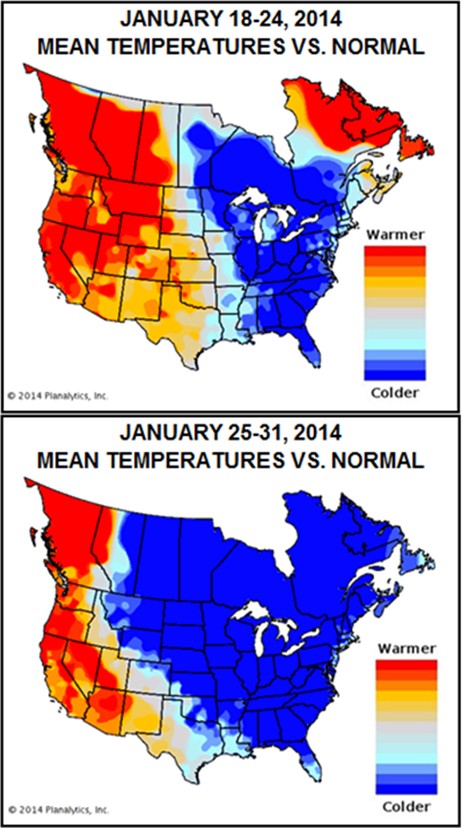 A January To Remember. Or Perhaps Forget. Here’s an excerpt of a recent post from one of our weather partners, Planalytics: “…Over the next two weeks, another round of arctic cold temperatures will invade the Central Plains and Midwest as well as the Mid-Atlantic, Northeast, New England, and Eastern Canada regions. Temperatures will likely not trend as cold as earlier in the month; however, they will be well below normal, with single-digit lows expected in the major cities such as New York, Boston, and Philadelphia.  Overnight lows in the Midwest, Interior Northeast, and Eastern Canada can drop below 0°F over the next two weeks. Freezing temperatures are expected to dip into the Southeast, including Florida…” 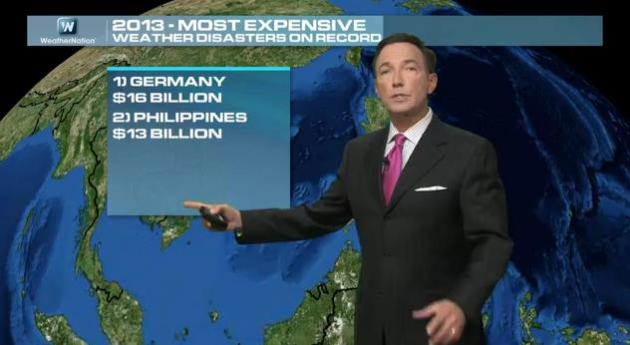 Billion Dollar Global Weather Disasters In 2013 – Another One Brewing For California in 2014? In today’s edition of Climate Matters we take a look at Aon Benfield’s new report, showing a record 41 billion-dollar-plus weather disasters, worldwide, last year. Jeff Masters has a terrific post at Weather Underground. Four countries experienced the most expensive weather disasters in their recorded history, including Germany, Philippines, New Zealand and Cambodia. If the dry pattern doesn’t break, very soon, California and much of the west may be facing a billion dollar drought in 2014. Let’s hope the pattern shifts, and quickly. 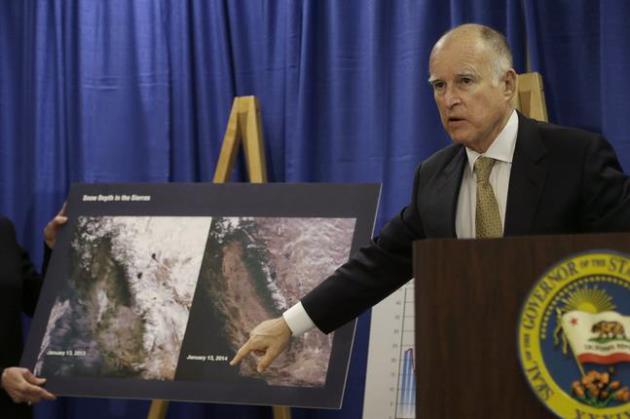 California In “Drought State of Emergency”, Governor Brown Declares. Here’s a clip from a story at ktla.com: “California Gov. Jerry Brown declared a “drought state of emergency” on Friday due to ongoing water shortfalls following the driest calendar year in state history. The governor said the state was facing perhaps the worst drought since records have been kept. “We can’t make it rain, but we can be much better prepared for the terrible consequences that California’s drought now threatens, including dramatically less water for our farms and communities and increased fires in both urban and rural areas,” Brown said. “I’ve declared this emergency and I’m calling all Californians to conserve water in every way possible…”

Photo credit above: “Gov. Jerry Brown points to images showing the snow depth in the Sierra mountains on Jan. 13, 2013, left, and Jan. 13, 2014, center, while declaring a drought state of emergency in San Francisco, Friday, Jan. 17, 2014. With a record-dry year, reservoir levels under strain and no rain in the forecast, California Gov. Jerry Brown formally proclaimed the state in a drought Friday, confirming what many already knew. Brown made the announcement in San Francisco amid increasing pressure in recent weeks from the state’s lawmakers, including Democratic Sen. Dianne Feinstein.” (AP Photo/Jeff Chiu) 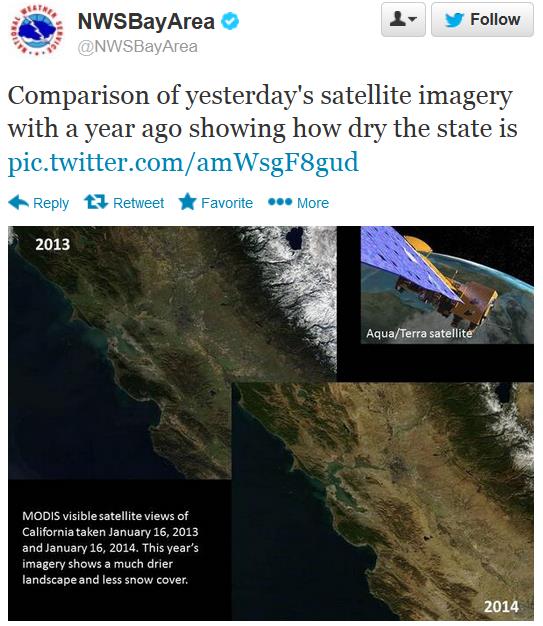 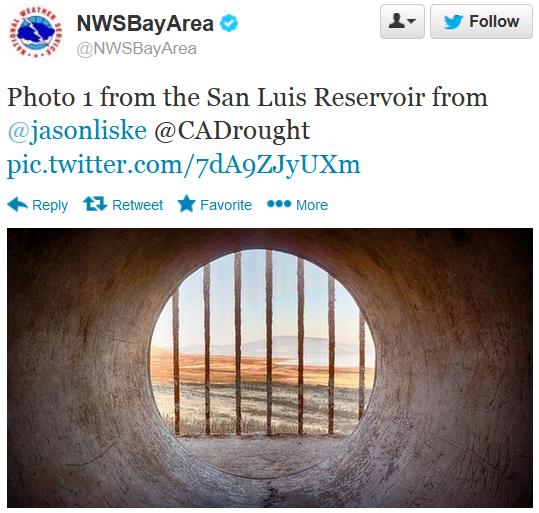 The Great Western Drought of 2014? It’s still early, and the rains may finally come in late January and February, but considering 2013 was the driest year for California in 160 years of record-keeping, and snowpack is 10-20% of normal in the Sierra Nevada, the stage is set for possible water shortages and more brushfires than average later this year. Photo: Twitter, Bay Area National Weather Service and Jason Liske. 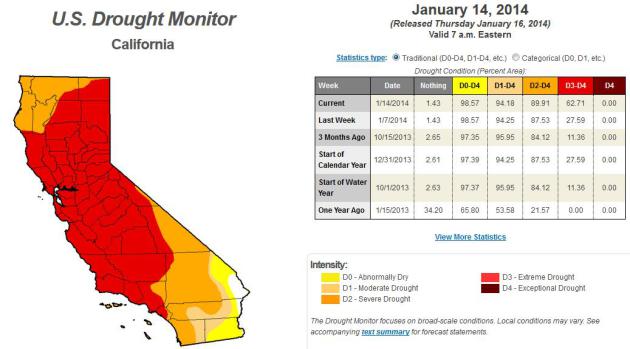 What Californians Can Expect From The Drought. Picking up on the unusually warm, dry pattern enveloping much of the west, Peter Gleick has a prediction of how a deepening drought will impact consumers and farmers in 2014; here’s an excerpt: “…Based on past experience, here is (part of) what Californians can expect this year if it remains as dry as it is now.

1. Urban water agencies will (and are beginning to) roll out a wide range of voluntary and mandatory water “conservation” programs. These typically ask customers to limit discretionary water uses such as watering gardens and washing cars and sidewalks. As droughts worsen, agencies expand these programs to offer incentives for both structural and behavioral changes: purchase more water-efficient appliances, remove grass and plant water-efficient gardens, cut shower times, and more. In the past, these kinds of programs and educational efforts have temporarily cut urban water use by between 10 and 25% depending on the programs and level of effort. 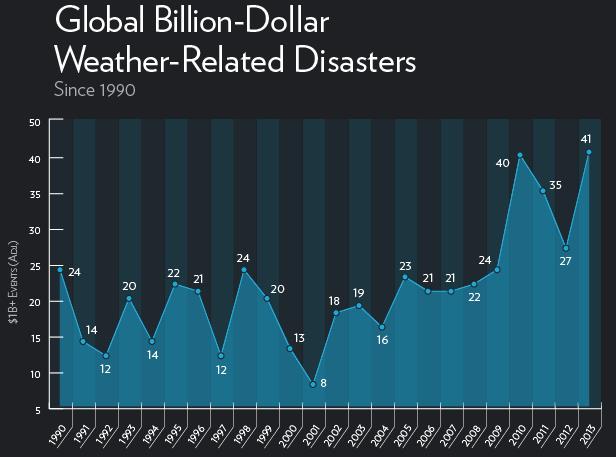 Earth’s Record 41 Billion-Dollar Weather Disasters of 2013. Meteorologist Jeff Masters has another eye-opening post at Weather Underground; here’s the intro: “Earth set a new record for billion-dollar weather disasters in 2013 with 41, said insurance broker Aon Benfield in their Annual Global Climate and Catastrophe Report issued this week. Despite the record number of billion-dollar disasters, weather-related natural disaster losses (excluding earthquakes) were only slightly above average in 2013, and well below what occurred in 2012. That’s because 2013 lacked a U.S. mega-disaster like Hurricane Sandy ($65 billion in damage) or the 2012 drought ($30 billion in damage.) The most expensive global disaster of 2013 was the June flood in Central Europe, which cost $22 billion. The deadliest disaster was Super Typhoon Haiyan, which killed about 8,000 people in the Philippines…” 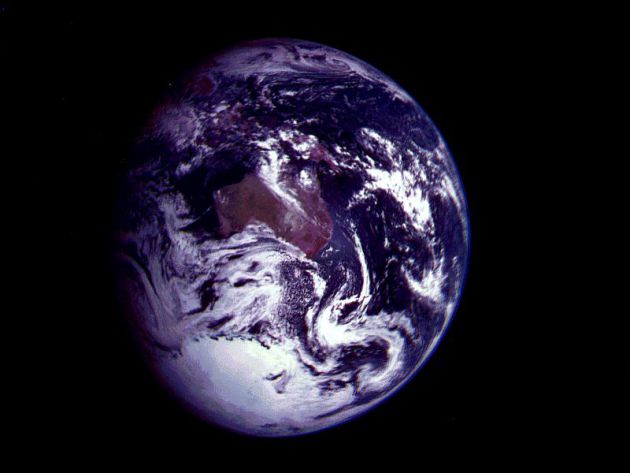 2013 To Be Among The Top 10 Warmest Years On Record According To World Meteorological Organization. Here’s an excerpt from Stoke Sentinel: “Experts have blamed high temperatures on man-made climate change stating that 2013 will be among the top 10 warmest on record. The World Meteorological Organization made the claim stating that ‘new record high’ sea levels are already making coastal populations more vulnerable to storm surges. A spokesman from the Intergovernmental Panel on Climate Change (IPCC) said: “All of the warmest years have been since 1998, and this year once again continues the underlying, long-term trend. The coldest years now are warmer than the hottest years before 1998...” (Image: NASA). 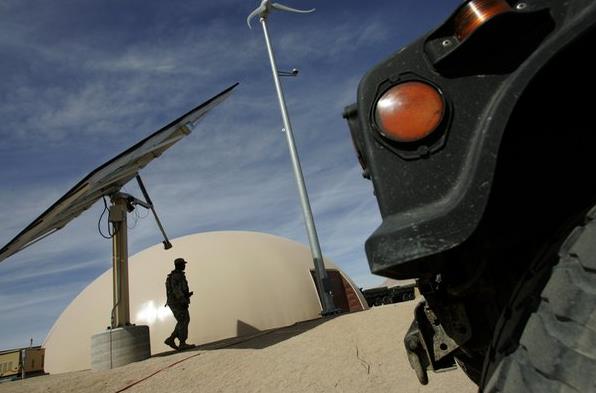 Armed Forces See Rise In Renewable Energy. To appease Al Gore? Probably not. To save money, build in redundancy and resiliency, and become less dependend on oil supply lines. Probably because it makes dollars and sense and lowers the risk to our troops deployed in the field, worldwide. Here’s an excerpt from The Los Angeles Times: “The use of clean energy technology has seen a sharp rise in military sites in the U.S., as the armed forces push into green sources of power around the country, a report said. The Army, Navy, Air Force and Marine Corps. have looked for ways to reduce its energy bills in recent years even as the Pentagon‘s budget is squeezed. Combined, the U.S. military goes through $4 billion worth of power on its bases, according to a report from Pew Charitable Trusts. The armed forces have moved to quickly adopt green energy solutions, the report said…”

Image credit above: “The armed forces are increasing their use of renewable-energy projects to cut down on power bills.” (Bob Chamberlin / Los Angeles Times / February 27, 2009). 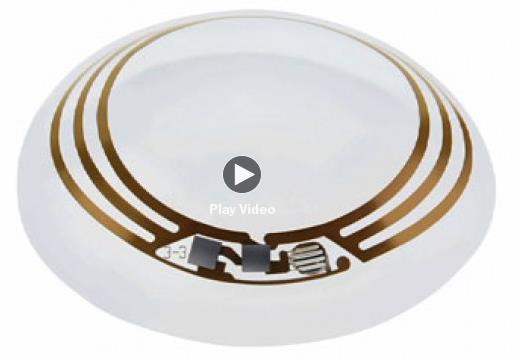 Google’s Smart Contact Lens: What It Does And How It Works. Wait, they want me to put this contraption next to my eyeball? The Washington Post has the article and video; here’s a clip: “…The soft contact lens that Google’s is introducing — it’s still just a prototype — houses a sensor between two layers of lenses that measures the glucose levels in tears. The lens also features a small — really small — antenna, capacitor and controller, so that the information gathered from the lens can move from your eye to a device where that data can be read and analyzed…”