Dear Santa – I just woke up from a Thanksgiving food coma. Yep, I’ve been good this year.

No iGadgets, bad ties or cologne this year, please!

The only thing I want under the tree is a Guardian Series Generac emergency power generator, made in Waukesha, WI. For the next time winds gust over 40 mph and a toppling tree 30 miles away plunges my home back into the 19th century. Home generators are flying off the shelves in the wake of record summer derechos and Sandy.

Details below: anyone under the age of 27 has never experienced a colder-than-average month, worldwide. According to NOAA October was the 332nd month in a row warmer than the 20th century average. 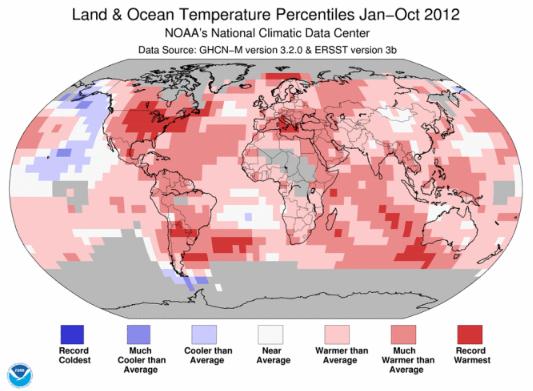 If You’re 27 Or Younger, You’ve Never Experienced A Colder-Than-Average Month. Well this statistic puts things into perspective. Grist.com has more details: “Nowhere on the surface of the planet have we seen any record cold temperatures over the course of the year so far. Every land surface in the world saw warmer-than-average temperatures except Alaska and the eastern tip of Russia. The continental United States has been blanketed with record warmth — and the seas just off the East Coast have been much warmer than average, for which Sandy sends her thanks. The National Oceanic and Atmospheric Administration summarizes October 2012:

* map above courtesy of NOAA. 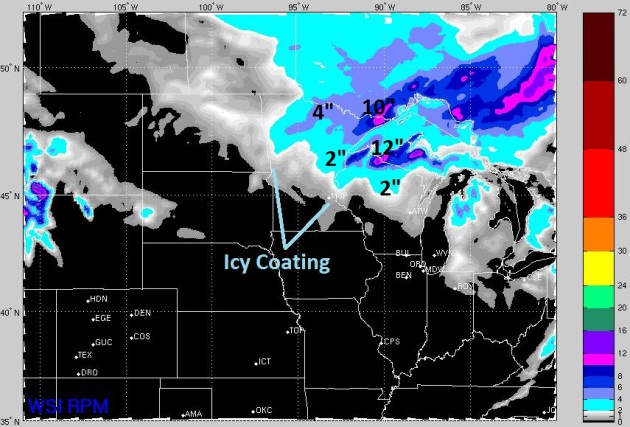 72 Hour Snowfall Forecast. WSI’s high-resolution 12 km. RPM model is printing out some 2″+ snowfall totals for portions of central and northern Minnesota and northern Wisconsin, closer to 4″ from Bemidji to Hibbing. Lake effect snow squalls will kick in behind the storm, piling up some 8-16″ amounts over far northern Wisconsin and the U.P. of Michigan. Right about now anyone with a snowmobile has an itch that a scratch can’t reach… 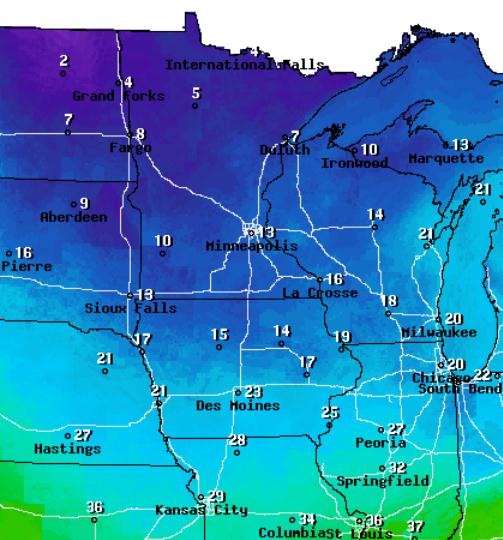 Parka Weather. I’ll be shopping for a new heavy coat today. The combination of 20s, and winds gusting over 20-30 mph will make it feel like +5 to +15 F. Nothing we haven’t experienced countless times over the years – but coming after a spell of early October-like warmth it’ll feel like a slap across the face. NOAA forecast map above valid 1 pm today. 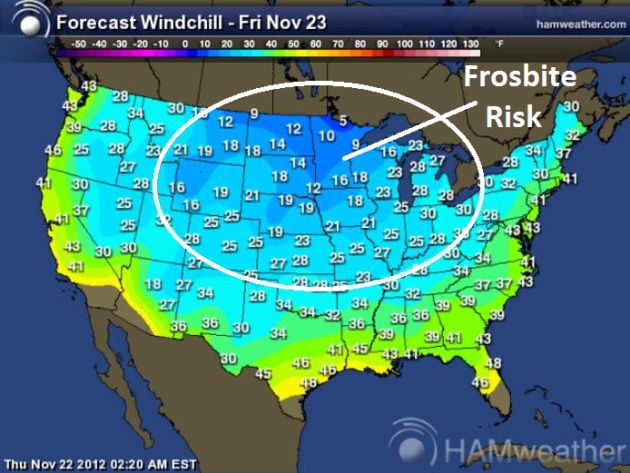 Frostbite Potential. We’ve been thru this drill before, hundreds of times. But coming after a run of near-record warmth I’m concerned that some power-shoppers won’t take the cold front seriously. The combination of 20s and winds gusting to 30 mph will make it feel like +5 to +15 F. at times. If you’re outside (with exposed skin) for 20-30 minutes you could become a candidate for a mild case of frostbite. Slap on a few extra layers before hitting the malls today. 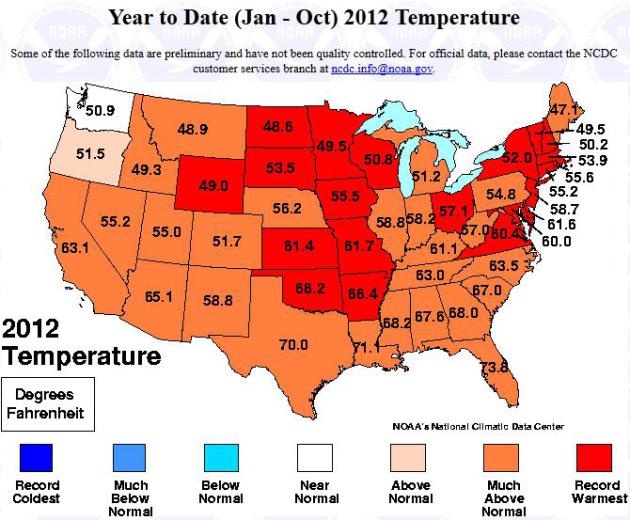 The Making Of The Hottest Year On Record: USA Temperature Update. Here’s an update on 2012, which will most likely go down into the record books at the warmest year of the last 115 across the nation. In fact there is a 90% probability 2012 will set a new record for warmth. 10 of the 11 warmest years have been observed since 2000. NOAA’s ClimateWatch has more: “…Now how does 2012 fit in? Well, 2012 has been warm, and the first driver of the extreme warmth was March. March was the warmest March on record by far, and this caused 2012 to leap out way ahead of the pack. We had the warmest spring on record, the warmest July on record, the third warmest summer on record. All of these together helped 2012 maintain a huge lead throughout the year. Average temperatures in October pulled 2012 back to the pack ever so slightly, but you can see that the year-to-date temperature not only remains well above average, it remains well above history. So we will most likely finish with the warmest year on record—and by a huge margin. Go to the CPC web page to see their outlook for yourself, and while you’re at it, check out all our climate records at the climate monitoring web site. Keeping the big picture in perspective is a big part of being “climate smart.”

Map above: NOAA NCDC. Minnesota, Wisconsin, Iowa and the Dakotas are among 21 states on track to experience the warmest year in the last 115 years of record-keeping. Every state, except for Washington, has had a warmer than average year.
332. October was the 332nd month in a row of global air temperatures warmer than the 20th century average. Source: NOAA NCDC.

Thanksgiving Warmth. Before the icy front arrived Thursday afternoon temperatures were unseasonably mild statewide. The mercury hit a record 60 in the Twin Cities, breaking the old record of 59 set in 1998. 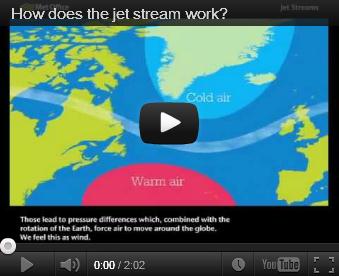 How Does The Jet Stream Work? The U.K. Met Office has an informative YouTube clip focused on explaining the how’s and why’s of the ubiquitous jet stream steering currents aloft: “What is the jet stream? How does the jet stream affect our weather in the UK? This animation explains how the jet stream works.” 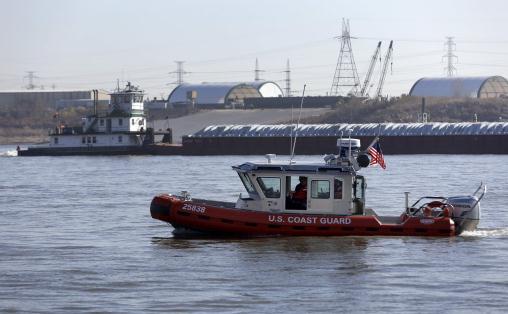 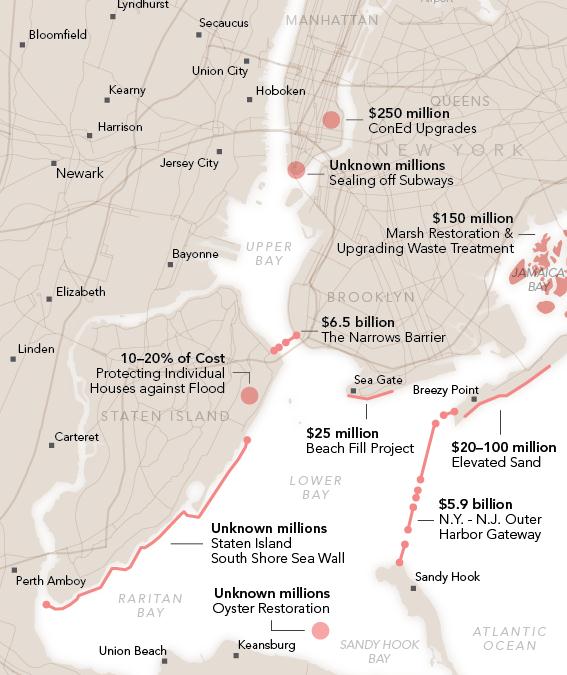 Can We Engineer Storm-Proof Metropolitan Areas? Will we go the way of the Dutch, building huge seawalls, dikes and levees to keep the sea out? Huffington Post has a very interesting story focused on possible ways to mitigate the next (inevitable) storm surge; here’s an excerpt: “…Next time the damage done in dollars and in lives could be far worse. At its peak, Sandy was only a Category 1 storm. Its winds never went above 90 miles per hour near New York. Were something like a Category 4 storm, with winds of 131 to 155 miles per hour, to make landfall near the city, the devastation would be awful. Many more would die. Houses would be toppled over by sheer windforce, subway tunnels could be flooded for months instead of a week, and the economic capital of the United States could be paralyzed. The city would incur $500 billion worth of damage, according to a 2006 analysis by the Department of Homeland Security. As the climate continues to change, the damage could be even worse. According to a 2007 report by Risk Management Solutions and the University of Southampton, by 2070 the New York area will have 2.9 million people and $2.1 trillion in assets exposed to coastal flooding...” 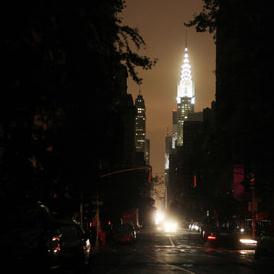 How To Build A More Resilient Power Grid. Here’s another thought-provoking article from Scientific American: “In the days leading up to Hurricane Sandy’s destructive march on the East Coast, utilities warned customers to prepare for widespread outages and potentially extensive power failure. The question was not if the grid would fail, but to what extent. The storm highlighted an already well-known problem: The U.S. power grid is vulnerable to extreme weather. As officials from New York to Venice, Italy, have acknowledged in recent weeks, climate change is likely to increase the prevalence of such weather. And according to analysts and outside groups working on the problem, there is no one-size-fits-all remedy that can insulate the ailing grid against an escalation of the elements…” 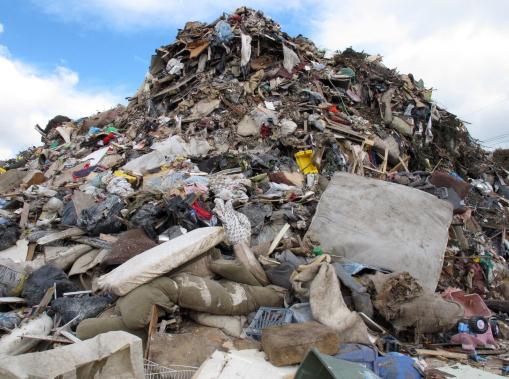 Vetoing Business As Usual After The Storm. Rebuilding in high-risk coastal areas after each and every hurricane is not only futile, but expensive, considering (all) U.S. taxpayers are picking up the tab. Here’s an excerpt of a story at The New York Times: “Not a month after Hurricane Sandy there’s a rough consensus about how to respond. America is already looking to places like London, Rotterdam, Hamburg and Tokyo, where sea walls, levees and wetlands, flood plains and floating city blocks have been conceived. New York clearly ought to have taken certain steps a while back, no-brainers after the fact. The Metropolitan Transportation Authority ought to have installed floodgates and louvers at vulnerable subway entrances and vents. Consolidated Edison should have gotten its transformers, and Verizon its switching stations, out of harm’s way, and Congress should have ordered the Army Corps of Engineers to study the impact of giant barriers to block parts of the city from the sea…”

Photo credit above: “One of the largest piles of storm debris at the Jersey shore is shown in this Nov. 15, 2012 photo in Long Branch N.J. Superstorm Sandy created tons of debris that towns in New York and New Jersey are still struggling to dispose of weeks later. Three weeks in, the round-the clock effort to remove storm rubble has strained the resources of sanitation departments and landfill operators, and caused heartaches and headaches for thousands of families.” (AP Photo/Wayne Parry)