Cold and Clippers; More Snow on the Way

Western Warmth
We don’t typically think of Alaska as being a warm place and it really isn’t, but they’ve had quite a stretch of warm temps lately. Take a look at high from Anchorage, AK. 47° is nearly 10° above average for this time of the year!

Warm Alaska Outlook
According to NOAA’s Climate Prediction Center, the end of October looks to stay quite warm.

U.S. Temp Outlook
Here’s a look at the 8 to 14 day temperature outlook for the Lower 48, which looks nearly the same as it has actually been since mid October. Warmer in the west, which the eastern two-thirds of the country look colder than average.

Tropical Update
Unfortunately for folks in Acapulco, we’ve had two tropical systems that have affected the area this hurricane season. The latest has been RAYMOND. The good news is that everybody will love Raymond later this week as he drifts west into the open waters of the Pacific. Beach weather will resume shortly, hang in there!

Raymond Forecast
Here’s the latest forecast for Raymond, which shows an overall drift west into the weekend.

Tracking Lorenzo
Here’s the latest track on Lorenzo, which will stay a fish storm in the central Atlantic.

National Wind Map
The surface wind map from midday Wednesday showed the 2 clipper systems that we’ve been tracking riding along the bottom edge of the extreme cold.

Record Snows This Week
These clipper systems haven’t produced a ton of moisture, but just enough moisture and cold air to produce some records snows, if you can believe it. Take a look:

Thanks to a large dip in the jet stream, much below average temperatures have settled south of the international border. Interestingly, the air is cold enough for lake effect rain and snow showers! The National Weather service has issued a Lake Effect Snow Warning for Upstate New York thru PM Thursday. As much as 5″ to 9″ of snow could fall thru that time!

Here’s the 3 day snowfall forecast, which shows accumulating snowfall potential across each of the Great Lakes. The heaviest appears to be near the Tug Hill Plateau, downwind of Lake Ontario.

U.S. Snow Cover
Since the turn of the new month, October has boasted some pretty robust snows in the lower elevations east of the Rockies. Early October saw a blockbuster storm across the High Plains, where up to 4ft.+ fell in western South Dakota. Most of that snow has melted, but as of October 23rd, 6% of the nation had snow cover.

Continued Cold and More Snow
Looking ahead, I don’t see much change in the weather maps until next week as a larger storm looks to develop across the Rocky Mountains. Here’s the temperature map for Thursday; warm in the west and colder in the east.

Here’s the change for next week. A developing storm will move into the Rocky Mountain region with a bundle of colder air welling up behind it. This air mass looks to be cold enough for another snow dump for some in the Mountains. It’s still a developing storm and worth watching, but temperatures on the eastern side of that storm look to warm a bit as we get closer to Halloween next Thursday. 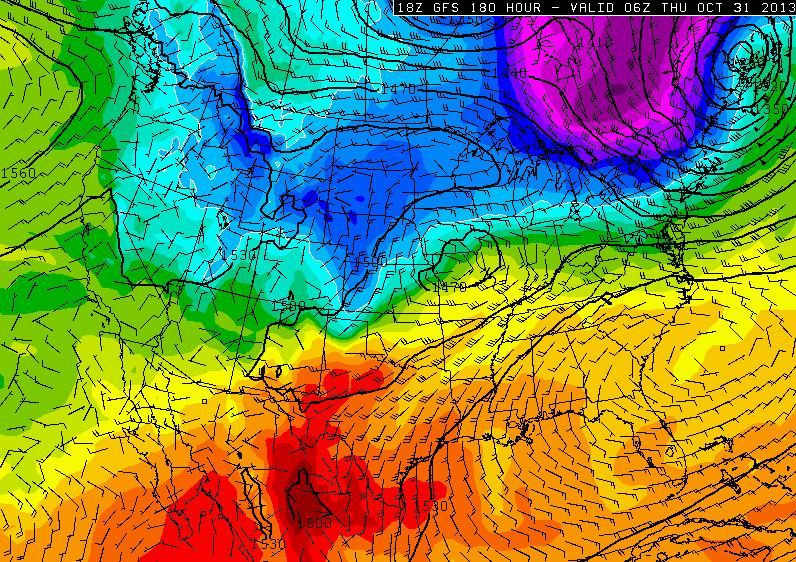 More Snow on the Way
Here’s  a look at an extended weather model, which suggests more snow piling up in the mountain out west as the said storm develops early next week.

Stay tuned for further update. In the meantime, have a great rest of your week. Don’t forget to follow me on Twitter @TNelsonWNTV