Cold Plunge Early Next Week Midwest to New England (was “Haiyan” the most intense storm ever observed?)

A Taste. Temperatures should rebound fairly quickly the latter half of next week, but NOAA model guidance (12 km NAM going out thru Tuesday night) shows Canadian air sloshing south of the border early next week; temperatures over the northern tier of the USA at least 15F colder than average. Loop: Ham Weather. 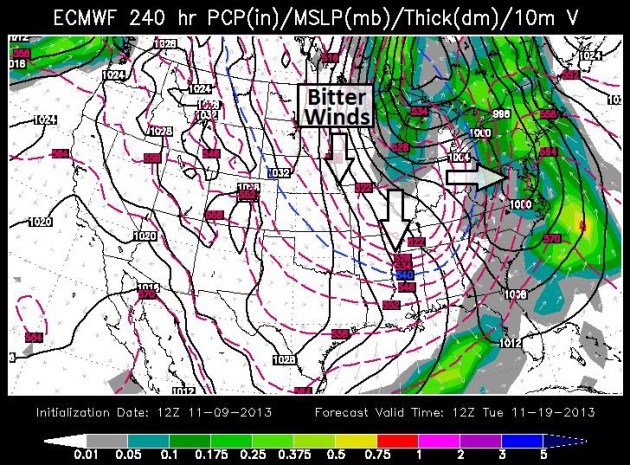 ECMWF Solution. The European model begs to differ pulling more numbing air south of the border early next week. The solution above is valid 6 am Tuesday, November 19, the same day the GFS is suggesting highs in the 50s. I’m leaning toward the (colder) ECMWF solution, but hope that the GFS might have the right idea. We’ll see. 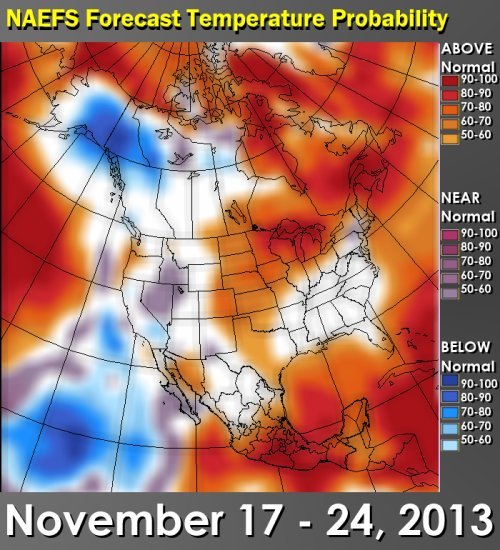 More Hints Of A Warm Bias. Environment Canada’s NAEFS model valid November 17-24 shows warmer than average temperatures from the Plains into the Midwest and Great Lakes. 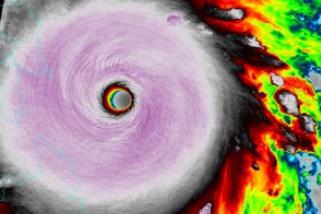 858 mb. Data suggests that the central pressure of Super Typhoon Haiyan may have dropped to 858 mb before reaching the Philippines, an unimaginable 25.33″ of mercury. That would make Haiyan the strongest storm ever observed on the face of the Earth. This is satellite-derived and not yet confirmed.

* here’s a good link with photos and video clips showing the aftermath of Haiyan from The Washington Post.

* Reuters now estimates the Philippine death toll from Haiyan at “at least 10,000”.

Super Typhoon Haiyan: One Of The Word’s Most Powerful Storms In History From Space. Here’s a reminder of how vitally important weather satellites are across the board, but especially with hurricane tracking and intensity estimates. The USA is the only nation that flies planes (and probes) into hurricanes to get a more accurate 3-D picture of a storm. Meteorologist Jason Samenow has more details at The Capital Weather Gang: “Over the last three days, satellite imagery has provided astonishing views of the storm’s structure. Many meteorologists, myself included, have remarked that they’ve never seen a storm with such an impressive presentation. From its unmistakably clear eye (episodically blurred by small swirls or mesovortices spinning inside it), the towering thunderstorms surrounding it, and its impeccable symmetry – it is a textbook, “perfect” tropical cyclone…” (enhanced IR loop: NOAA). 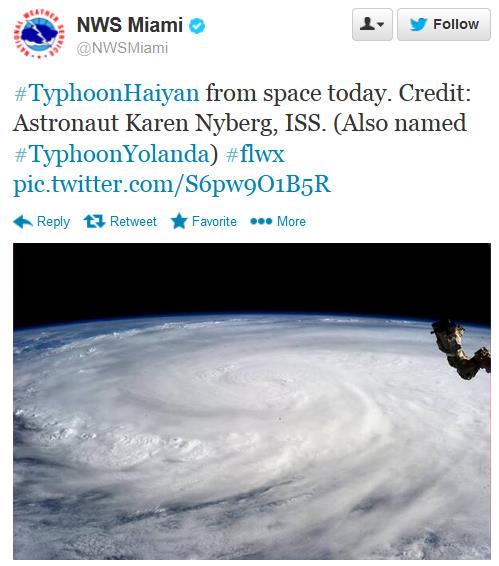 * here’s more information from The Red Cross on how you can help Super Typhoon Haiyan survivors. 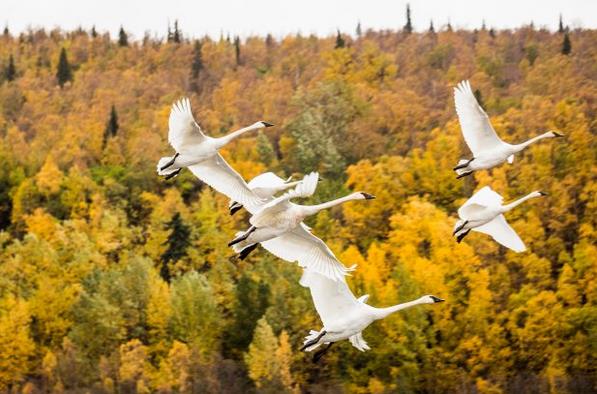 “Astounding” Warmth Recorded Across Alaska Last Month, According to Climate Center. Alaska Dispatch has the details; here’s an excerpt: “The warmth that swaddled Alaska in October was nothing short of “astounding,” with 30 warmer-than-normal days and the overall temperature a “significant” 7.4 degrees higher than normal. The dramatic adjectives come from the normally staid Alaska Climate Research Center, which reports on the wet-and-warm month in a new summary that highlights the drumbeat of shattered records in both temperature and precipitation...” 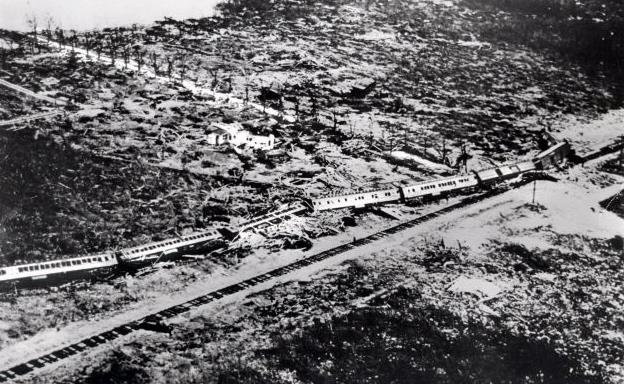 After Typhoon, A Look At Powerful U.S. Storms. Here’s a good recap of America’s most extreme hurricanes, courtesy of AP and seattlepi.com: “A typhoon that slammed the Philippines is among the strongest on record with sustained winds of nearly 150 mph when it made landfall, and the destruction it caused rivals that of some of the most powerful hurricanes to strike the U.S. mainland. A hurricane’s intensity is typically gauged by its barometric pressure. Below are the five most intense hurricanes on record to strike the U.S. mainland, ranked by minimum pressure at landfall, according to the National Hurricane Center in Miami. Forecasters say the accuracy of wind speeds is somewhat uncertain for some historical hurricanes because of limits on technology at the time…”

Photo credit above: “This September 1935 file photo shows the wreckage of an 11-car passenger train that was derailed by a Labor Day hurricane in the Florida Keys. The Hurricane Center says no wind measurements were available from the core of this small but “vicious” hurricane, which was a Category 5 storm when it reached the Florida Keys. But a pressure measurement taken at Long Key, Fla., makes it the most intense hurricane ever to make landfall on the U.S. mainland. It was blamed for 408 deaths and caused an estimated $6 million (1935 dollars) in damage.” Photo: Uncredited, AP. 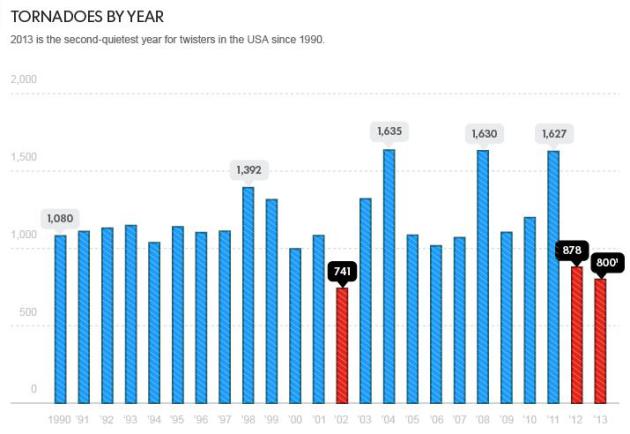 Tranquil Year For Tornadoes. 2013 has been the second-quietest year for tornadoes since 1990, according to NOAA SPC. USA Today has a good recap; here’s the introduction: “Hurricanes have been on holiday this year, and so too have their ferocious cousins, tornadoes. The USA is enjoying its second-consecutive below-average tornado season, and one of the calmest years for tornadoes in more than two decades, according to data from the Storm Prediction Center in Norman, Okla. “It’s been a near-record quiet year, especially with respect to strong to violent tornadoes,” said warning coordination meteorologist Greg Carbin of the prediction center…” 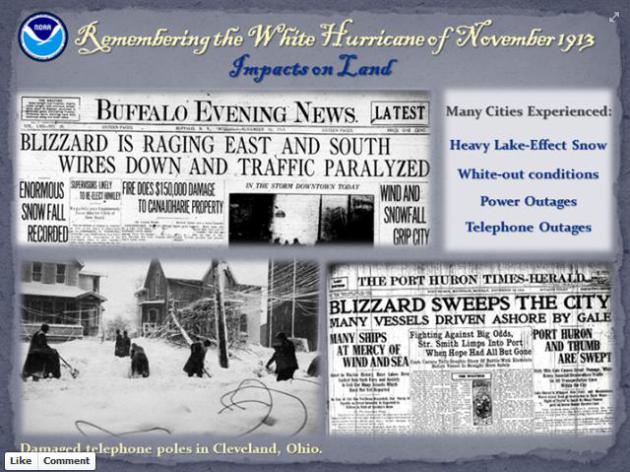 Remembering The “White Hurricane” Of Mid-November, 1913. Here’s a great recap of a wild storm that whipped up 90-mph winds and 30-40 foot seas on the Great Lakes in 1913, courtesy of the Detroit office of the National Weather Service: “During the infamous “White Hurricane” of November 1913, intense lake-effect snow occurred downwind of the Great Lakes as cold, arctic air moved over the relatively warm lake water. The wind and snow combined to cause whiteout conditions, paralyzing many cities across the Great Lakes Region. Port Huron, Mich., and Cleveland, Ohio, were two of the hardest-hit cities, experiencing both heavy snowfall and tremendous snow drifts. Cleveland broke its 24-hour snowfall record, with 17.4 inches in one day and a three-day total of 22.2 inches. High winds caused extensive power outages across the Great Lakes, effectively cutting off communication via telephone and telegraph.” 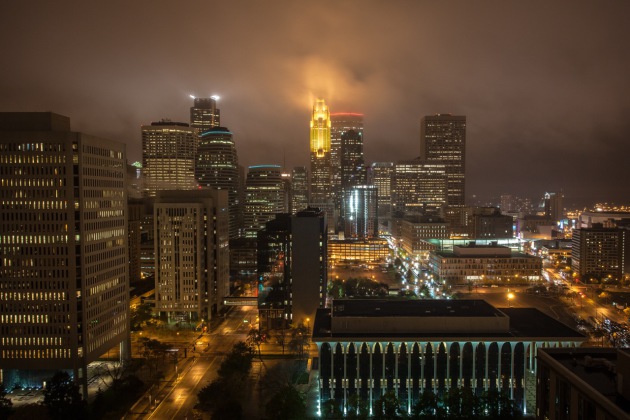 * Photo above courtesy of Steve Burns.

“It is a lie that we can continue to live as we have, that our reliance on fossil fuels and our endless economic growth at the expense of our planet is stable and sustainable. Not only does science tell us that, but God’s word calls us to account for how we’ve treated creation.” – Jim Wallis, The Huffington Post. 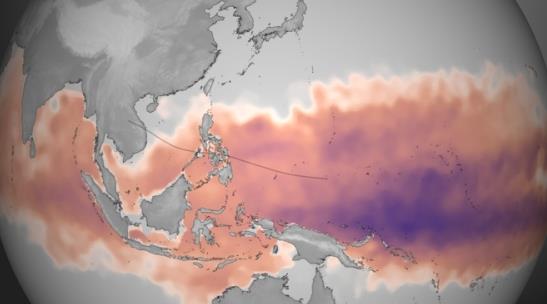 Super Typhoon Haiyan: A Hint Of What’s To Come? Climate Central meteorologist Andrew Freedman takes a look at how warming oceans may be impacting the intensity of hurricanes and typhoons; here’s a clip: “Super Typhoon Haiyan was one of the most intense tropical cyclones at landfall on record when it struck the Philippines on Nov. 7. Its maximum sustained winds at landfall were pegged at 195 mph with gusts above 220 mph. Some meteorologists even proclaimed it to be the strongest tropical cyclone at landfall in recorded history. Haiyan’s strength and the duration of its Category 5 intensity — the storm remained at peak Category 5 intensity for an incredible 48 straight hours — raises the question of whether manmade global warming tipped the odds in favor of such an extreme storm. After all, the global atmosphere contains 4 percent more water vapor than there was in the 1970s and global air and sea surface temperatures are higher now than they used to be, due in large part to manmade global warming as well as natural climate variability. These changes would, in theory at least, lead to stronger and wetter storms…”

Image credit above: “Graphic showing the total amount of heat energy available for Super Typhoon Haiyan to absorb, not just on the surface, but integrated through the water column. Deeper, warmer pools of water are colored purple, though any region colored from pink to purple has sufficient energy to fuel storm intensification. The dotted line represents the best-track and forecast data as of 16:00 UTC on Nov. 7.” Credit: NOAA.

More information on the image above provided by NOAA:
“The intensification of Super Typhoon Haiyan is being fueled by “ideal” environmental conditions – namely low wind shear and warm ocean temperatures. Maximum sustained winds are currently at 195 mph, well above the Category 5 classification used for Atlantic and East Pacific hurricanes. Plotted here is the average Tropical Cyclone Heat Potential product for October 28 – November 3, 2013, taken directly from NOAA View. This dataset, developed byNOAA/AOML, shows the total amount of heat energy available for the storm to absorb, not just on the surface, but integrated through the water column. Deeper, warmer pools of water are colored purple, though any region colored from pink to purple has sufficient energy to fuel storm intensification. The dotted line represents the best-track and forecast data as of 16:00 UTC on November 7, 2013.” 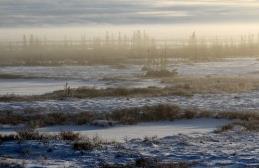 “Last” Arctic Region Succumbing To Global Warming. Here’s the intro to a story at Blue and Green Tomorrow: “Researchers from Ontario universities say that the lakes of the Hudson Bay Lowlands in north-east Canada, one of the last areas to hold out against global warming trends, are showing signs of sudden change. Their study, published in the journal Proceedings of the Royal Society B, notes that the sub-Arctic region had maintained stable, cool temperatures for hundreds of years until the mid-1990s, thanks to sea ice on Hudson Bay – the largest northern inland sea – that naturally cooled the waters. However, average air temperatures in the area have also risen dramatically – going from around 0C in the mid-1990s to 3C by the end of the 2000s in the shoreline town of Churchill, Manitoba. By studying long-dead algae from the lakebeds off the Hudson Bay shoreline, the scientists found that the waters have warmed at an extraordinary rate and magnitude over the last two decades…”

Could Hybrid Nuclear Plants Help Stem Global Warming? Clean Technica has the story – here’s the introduction: “MIT’s Charles Forsberg has come up with an idea that might work to combine nuclear energy generation with renewable energies in an effort to halt the need for fossil fuels. The idea proposes combining a nuclear power plant with another renewable energy system, which Forsberg argues “could add up to much more than the sum of its parts…” 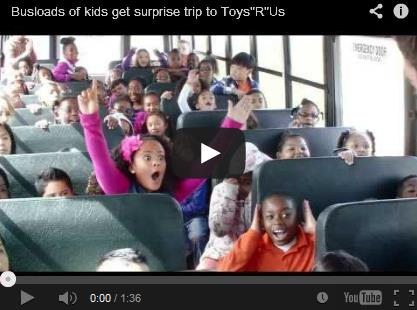 Is This The Most Anti-Science, Anti-Environmental TV Ad Ever? Who needs trees when you have Toys “R” Us? Here’s an excerpt and video clip from Huffington Post: “…In this ad, kids are loaded onto a school bus labeled “Meet the Trees Foundation.” The guide, under the guise of being “Ranger Brad” says, “Today we’re taking some kids on the best field trip they could wish for.” He then shows them some pictures of leaves, while the camera pans around the bus at bored, tired, yawning kids. Then, surprise! He reveals they are not going on a natural science field trip at all, but to… Toys “R” Us! Celebration! Confetti littering the ground as the kids run from the bus into the store! Free wild rumpus in the store playing with whatever they want. Hooray!..”