Coldest Air Stays in Canada (golf courses opening up out east – in January?)

There are January Thaws, and then there are January Meltdowns. A year ago today the high in the Twin Cities was a balmy 52 F. January of 2012 saw 9 days above 40; an average monthly temperature 7.7 F. above average, setting the tone for a warm year to come.

3 months ago I went out on a limb and predicted this winter wouldn’t be as mild as last winter – and not as snowy as 2010-2011 either. Something in-between those two (extreme) winters. I stand by that forecast, by the way.

A little rain is likely tonight & Friday. Highs top 40 F. tomorrow before falling off a temperature cliff on Saturday; a howling northwest wind making it feel subzero by afternoon.

We get off to a numbing start next week, but I’m no longer convinced it’ll be the coldest week of winter. Right now it looks like a glancing blow of frigid air; a couple more subzero nights late next week. We may still get smacked by hair-curling cold again in late January, but the risk of sustained, day after day of soul-grinding cold has lessened a bit.

NOAA predicts some slight improvement in the drought over eastern Minnesota, but “persistence” across much of Minnesota, meaning more of the same.

I hope we’re not still having this (drought) conversation come April.

11 Separate Billion Dollar Weather/Climate Disasters In 2012. Here’s the latest installment of my (daily) climate headlines, available at YouTube: “Meteorologist Paul Douglas takes looks at the billion dollar extreme weather events of 2012. There are 11 events in total including Hurricane Sandy, Hurricane Isaac, the Derecho and the Drought. What do you remember most about the weather in 2012?”

Seriously Cold. These were air temperatures yesterday evening over Canada. It now appears the core of this pipe-rupturing, battery-draining air will merely brush the Upper Midwest and Great Lakes early next week, a second surge coming the end of next week. But the very coldest air is forecast to stay north of the border for the next 1-2 weeks. For the current temperatures over Canada click here, maps courtesy of Ham Weather.

84 Hour Snowfall Forecast. Looking for fresh snow? Drive west, about 5-6 hours or more. The Dakotas will pick up enough snow to shovel and plow, maybe a foot or more from the Black Hills to Bismarck, maybe 3-6″ for the Red River Valley of far northwestern Minnesota.

Climate Headlines. Here’s one YouTube link that has all the 2:30 climate headlines I’m creating for WeatherNation TV and our other media partners – a chronological list of segments highlighting some of the biggest weather and climate stories that made me do a double-take. 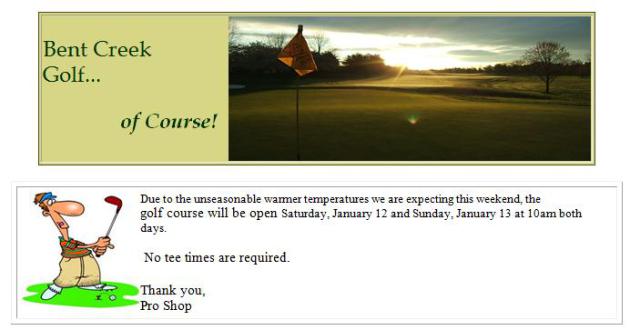 January Golf? My father lives in Lancaster county, Pennsylvania, about 80-90 minutes west of Philadelphia. With unseasonable warmth in the forecast the local golf course has decided to open up next weekend. No tee times are required. Sounds like a good plan to me.

2012: Hottest Year Ever In U.S. Thanks Onion – I needed this chuckle. If you need a (PG-rated) day–brightener click here. 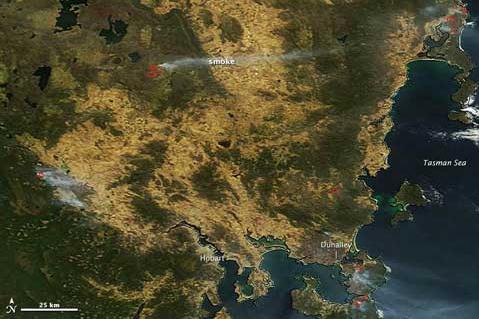 Too Hot: Australia’s Big Heat-Breaking Records. Here’s an excerpt of a story on the historic levels of heat gripping Australia from New Zealand’s Hot Topic: “…NASA’s Earth Observatory provides this overview of the fires in Tasmania over the weekend that caused chaos and destruction in the normally cool state — Hobart hit an all time high temperature of 41.8ºC, a full degree above its previous record. Fire danger in parts of New South Wales has been classified as catastrophic, and this NASA Worldview image for Jan 8th appears to show smoke from fires in southern NSW streaming out to the east and over the sea towards New Zealand…” 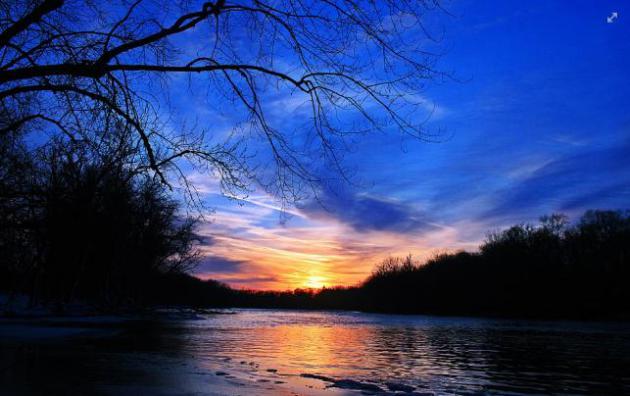 Sunset To Remember. Thanks to Tom Purdy, who snapped this terrific photo of the Rock River, near Janesville, Wisconsin late Tuesday. 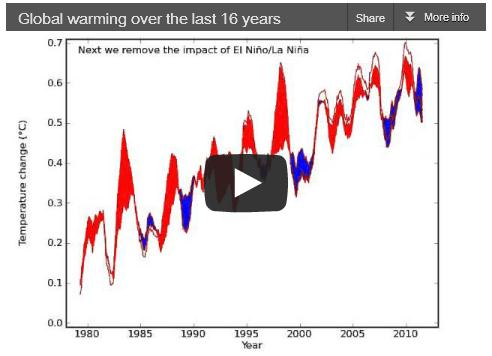 16 (More) Years Of Global Warming. One of the denialist memes going around now is “there hasn’t been any warming since 1998.” Really? The last 9 consecutive 12 month periods over the USA “conus” have been the warmest ever observed. We’ve gone 28 years in a row with global temperatures consistently warmer than the 20th century average. If you strip away volcanic and solar activity, as well as biases brought on by El Nino and El Nina, there is no scientific evidence that the rate of global warming has slowed…or peaked…or dropped. None. Skeptical Science takes a look at the latest scientific conspiracy theory: “Human greenhouse gas emissions have continued to warm the planet over the past 16 years. However, a persistent myth has emerged in the mainstream media challenging this.  Denial of this fact may have been the favorite climate contrarian myth of 2012, first invented by David Rose at The Mail on Sunday with an assist from Georgia Tech’s Judith Curry, both of whom later doubled-down on the myth after we debunkedit.  Despite these repeated debunkings, the myth spread throughout the media in various opinioneditorials and stunts throughout 2012. The latest incarnations include this article at the Daily Mail, and a misleadingly headlined piece at the Telegraph. As a simple illustration of where the myth goes wrong, the following video clarifies how the interplay of natural and human factors have affected the short-term temperature trends, and demonstrates that underneath the short-term noise, the long-term human-caused global warming trend remains as strong as ever…” 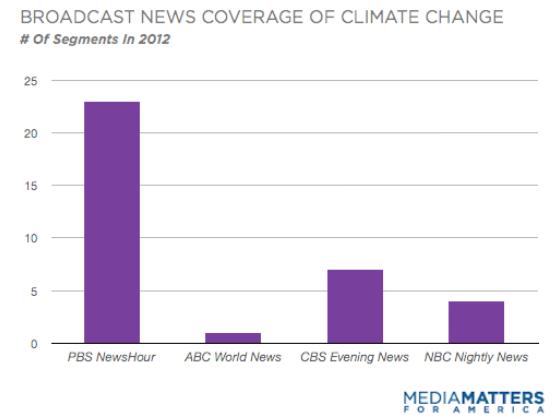 NASA Chases Climate Change Clues Into The Stratosphere. Here’s a clip from a recent article from NASA: “Starting this month, NASA will send a remotely piloted research aircraft as high as 65,000 feet over the tropical Pacific Ocean to probe unexplored regions of the upper atmosphere for answers to how a warming climate is changing Earth. The first flights of the Airborne Tropical Tropopause Experiment (ATTREX), a multi-year airborne science campaign with a heavily instrumented Global Hawk aircraft, will take off from and be operated by NASA’s Dryden Flight Research Center at Edwards Air Force Base in California. The Global Hawk is able to make 30-hour flights. Water vapor and ozone in the stratosphere can have a large impact on Earth’s climate. The processes that drive the rise and fall of these compounds, especially water vapor, are not well understood. This limits scientists’ ability to predict how these changes will influence global climate in the future. ATTREX will study moisture and chemical composition in the upper regions of the troposphere, the lowest layer of Earth’s atmosphere. The tropopause layer between the troposphere and stratosphere, 8 miles to 11 miles above Earth’s surface, is the point where water vapor, ozone and other gases enter the stratosphere….” 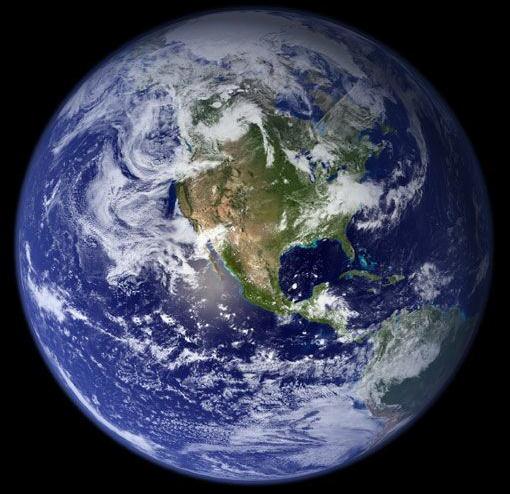 The Market And Mother Nature. Here’s the intro to an Op-Ed in the New York Times from St. Louis Park’s Thomas Friedman: “Whenever I hear the word “cliff,” I am reminded of something that President Obama’s science adviser, John Holdren, used to say about how we need to respond to climate change because no one can predict when it might take a disruptive, nonlinear turn. “We are driving toward a cliff in a fog,” said Holdren about the climate, and that’s always a good time “to start tapping on the brakes.” Indeed, when you think about how much financial debt we’ve built up in the market and how much carbon debt we’ve built up in the atmosphere, the wisest thing we could do as a country today is to start tapping on the brakes by both emitting less carbon to bend the emissions curve down and racking up less debt to bend our debt-to-G.D.P. curve down. Unfortunately, we are still doing neither...” (satellite image above: NASA). 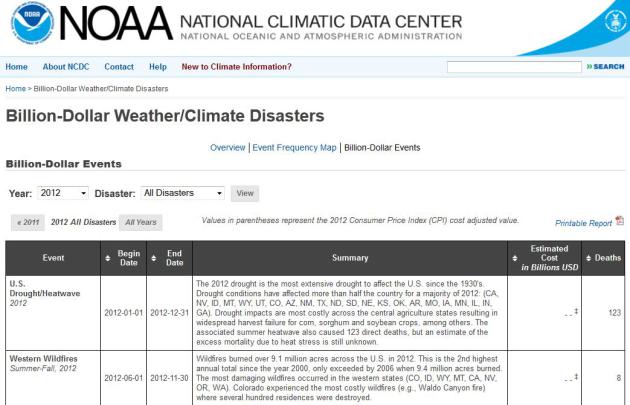 Billion Dollar Weather/Climate Disasters In 2012. Here is a list of the most extreme weather and climate events in 2012, courtesy of NOAA NCDC.