26 Jul 2013, 5:41 am
Share:
Canadian Leakage
Stare at the weather maps long enough and you begin to hallucinate. I’ve been telling you (ad nauseum) for years that something has changed on the maps – the pattern isn’t even close to what I grew up with in the 70s and early 80s. Weather getting “stuck” for extended periods of time. Odd gyrations in the jet stream steering winds.
John Mason at Skeptical Science writes: “Evidence is mounting to indicate that the response of the jet stream to polar amplification has been to tend to slow down and meander more, with a greater tendency to develop blocking patterns, which in turn prolong and intensify all sorts of extreme weather events.”
Northern latitudes are warming faster than mid latitudes, resulting in a 12 percent drop in average jet stream winds, which may slowing storms and hot high pressure ridges.
All or nothing? Drought or flood? 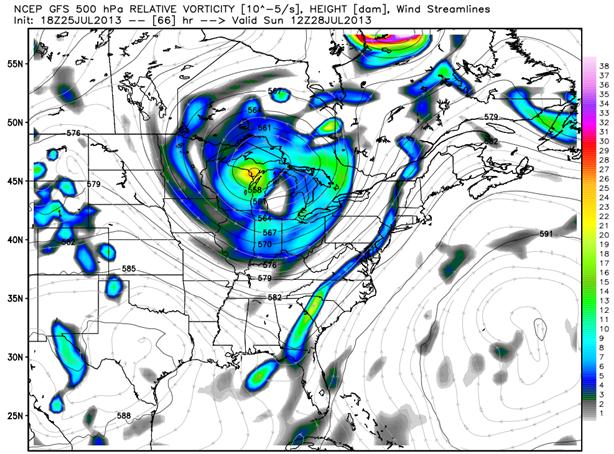 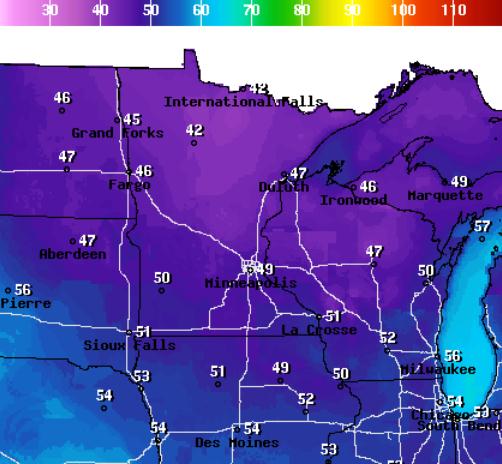 30s in Northern Minnesota Saturday Night? Good grief – what next? One more symptom of an amped up jet stream taking some very unusual turns, more evidence of “Arctic amplification”. The map above shows predicted lows for Saturday night, upper 40s in the Twin Cities, low 40s from Brainerd to Bemidji. I’d bet a bagel Tower and Embarrass will record lows in the 30s early Sunday morning. Map courtesy of NOAA.

Summer Relapse. Residents from Minnesota to Michigan will be reaching for sweatshirts the next couple of mornings, lows dipping into the 40s and 50s with a stiff wind and a few instability showers. Meanwhile a tight little storm chugs up the East Coast, brushing Cape Cod and Boston with heavy rain. Showers and T-storms track across the Mid South, a few monsoon storms over the Southwest, while the West Coast remains bone dry. 84 hour NAM: NOAA. 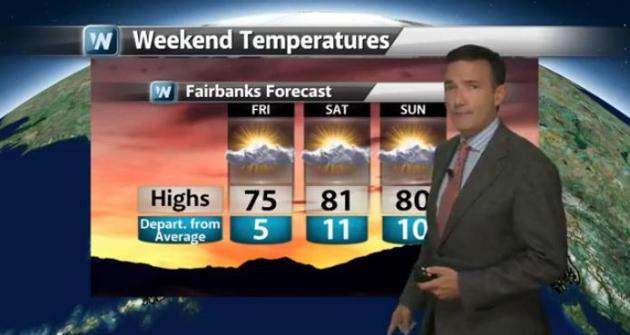 Thawing Out….In Fairbanks. Another mixed-up, upside-down weather map. Fairbanks will be 20-25 degrees warmer than much of Wisconsin and northern Michigan by Saturday, a southward dip in a buckling jet stream plunging an airmass that would be right at home in late September into the Upper Midwest and Great Lakes. Free A/C? Plenty of free A/C. Details of today’s Climate Matters: “Travel to Alaska to warm-up? Yes,a big change in the jet stream is bringing much cooler temperatures to the lower 48. Chief Meteorologist Paul Douglas likes to call it Canadian Leakage. Then there’s Tropical Storm Dorian. The models are all over the place for where Dorian could wind up.”

The big headline this morning is that Dorian has weakened and is becoming more disorganized.

Here is the latest from the National Hurricane Center. 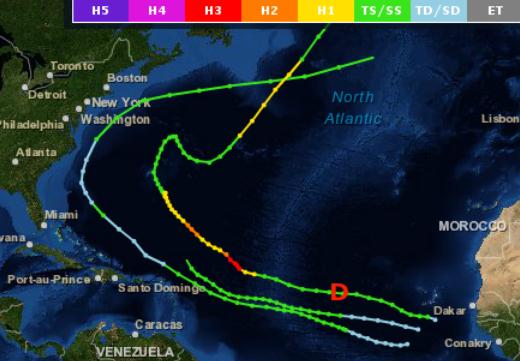 Late July Hurricane Climatology. I thought this was an interesting nugget, courtesy of Brian McNoldy, at The Capital Weather Gang: “…In the past 162 years, just three other storms were named (tropical storm intensity or greater) this far east during the entire month of July:  Anna 1969, Alex 1998, and Bertha 2008.  Dorian has joined that list, and for reference, its current location is marked with a red “D”… basically right on top of Bertha’s track; however, Dorian is not expected to curve out to sea so quickly…”

Image credit above: “The only three storms that were at least tropical storms at or near Dorian’s longitude during July going back to 1851.” (NOAA).