Lakes and rivers across much of Minnesota at historic low levels. 30% of Minnesota experiencing extreme drought; severe drought now across most of the metro area.

70+ mph wind gusts across the Dakotas yesterday. Details from NOAA. 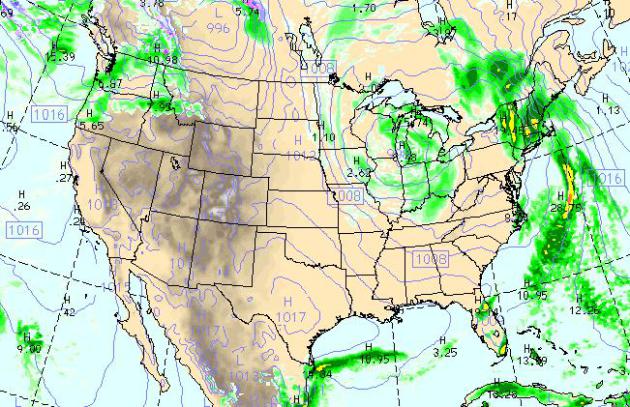 Today’s Weather Map. 4 pm today, according to the WRF model, brings showery rains from Minnesota into the Great Lakes, a steadier, heavier rain for much of New England. Skies clear across the East Coast, with lingering T-storms over Florida. Most of the west stays warm and dry, showers for the Pacific Northwest. Map above: NOAA.

A Mild Bias Into Much Of Next Week. Canada is pulling it’s punch, at least for the next week or so. The core of the jet lifts farther north, allowing 60s, even a few 70s to push as far north as Minnesota. The best chance of showers should come over the northern third of the USA. 192 forecast above courtesy of NOAA.

North America Most Affected By Increase In Weather-Related Natural Catastrophes. Global reinsurance giant Munich Re has produced a comprehensive video connecting the dots. Within insurance (and military) circles, there is little ongoing “debate” about the science: “A new study by Munich Re shows that North America has been most affected by weather-related extreme events in recent decades. The publication “Severe weather in North America” analyzes all kinds of weather perils and their trends. It reports and shows that the continent has experienced the largest increases in weather-related loss events.” 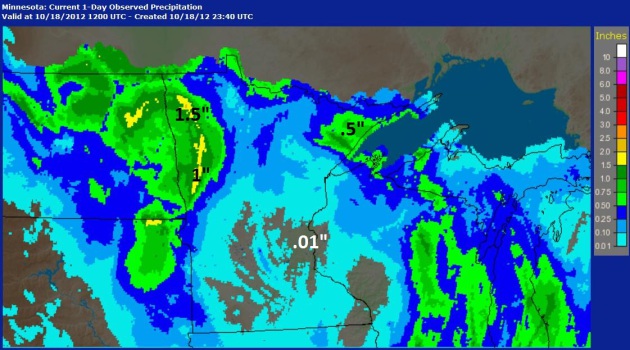 24-Hour Rainfall. Doppler radar estimates from the National Weather Service show some .5 to 1.5″ amounts over the Red River Valley and eastern Dakotas, a whopping .01″ in the Twin Cities – in the “eye” of Thursday’s storm

DNR Urges Water Conservation Due To Severe Drought. KARE-11 has the story (and video); here’s an excerpt: “The Minnesota Department of Natural Resources warns Minnesotans to conserve water, with severe drought now affecting almost half our state and straining water supply. The entire state is considered to be in moderate drought. The agency is asking people to stop watering their lawns and trees or washing their cars. Farmers are asked to stop outdoor irrigation and businesses should reduce their water use, state officials say.…”

Morphing Drought of 2012. The animation above is a 6-week time lapse of expanding and deepening drought, from Minnesota southward to Texas, westward to Nevada. Exceptional drought conditions linger from South Dakota southward to Oklahoma – much of Georgia is also suffering thru historic drought.

“Eye Of The Storm”. Thursday’s strong cyclone had an almost hurricane-like appearance with spiral bands wrapping around a calm “eye” or center of low pressure close to the Twin Cities. Future radar (4 km NAM) shows this counterclockwise swirl of moisture pinwheeling into the Great Lakes; showers and T-storms pushing off the east coast, a few lingering puddles over Florida. Model data: NOAA and Ham Weather. 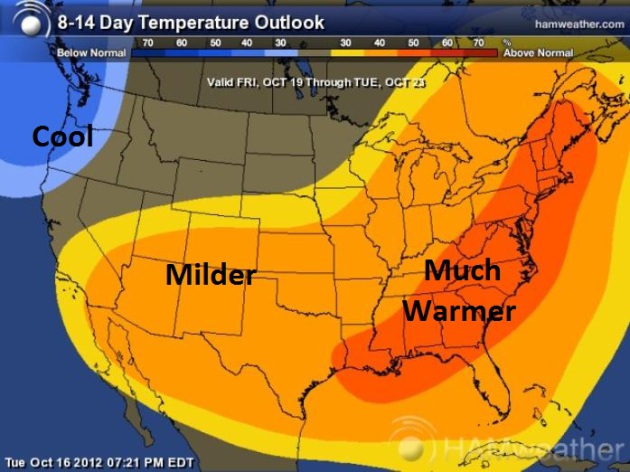 8-14 Day Temperature Trends. According to NOAA CPC (Climate Prediction Center) there should be a warm bias over much of the eastern and southern states thru October 23, only the Pacific Northwest showing cooler than average trends. I expect mild weather from the weekend into the first half of next week, followed by a return to chilly weather the end of next week. Map: NOAA and Ham Weather. 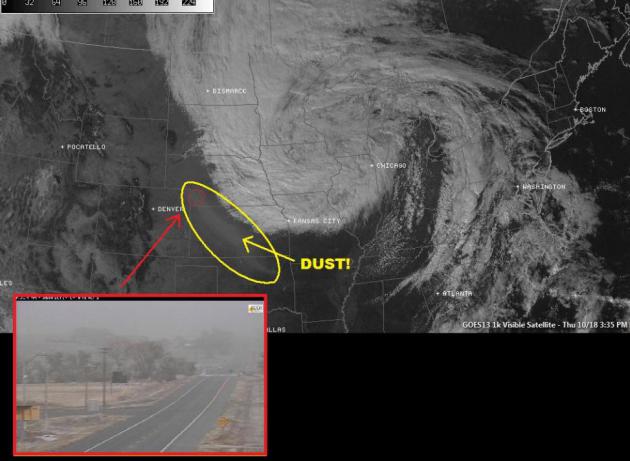 Forecast Calls For Blowing Dust. Drought + dry topsoil + 50+ mph winds = blowing dust, a mini-Dustbowl effect for the central Plains on Thursday, a plume of dust showing up on the midday visible satellite image from NOAA. 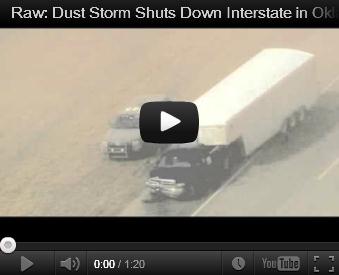 Dust Storm Shuts Down Interstate In Oklahoma. More details in this YouTube clip: “A massive dust storm swirling reddish-brown clouds over northern Oklahoma triggered a multi-vehicle accident along a major interstate Thursday, forcing police to shut down the heavily traveled roadway amid near blackout conditions.” 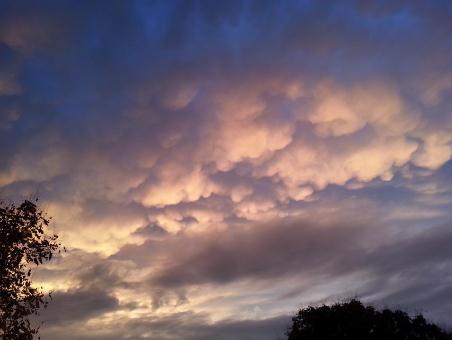 “Mamma”. Cumulonimbus mammatus, to be precise – courtesy of the St. Louis office of the National Weather Service; a tip-off of possible lightning (and hail) nearby. 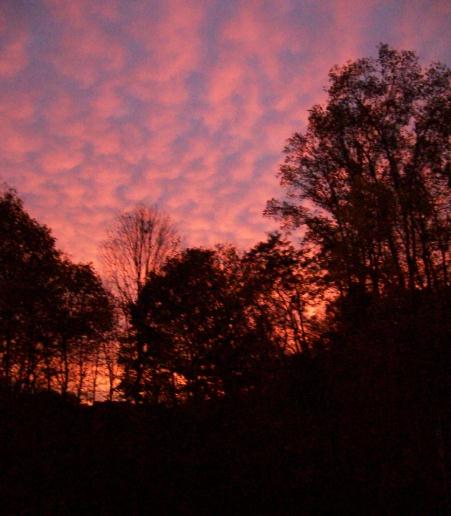 Autumn Twilight. Rose Moore snapped this fine photo in northeastern Ohio yesterday; she probably had to get out of the house to escape a blizzard of negative attack-ads on television in one of America’s (unlucky?) swing states. 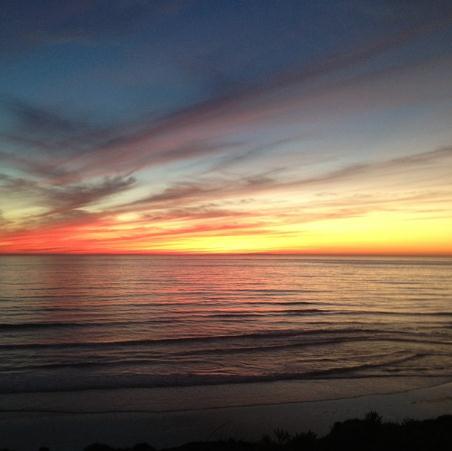 Weather Therapy. This was the scene in Del Mar, California Thursday – photo courtesy of @peterdohoney. 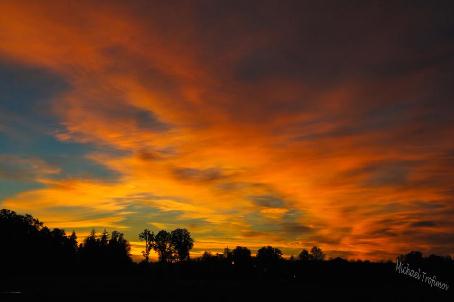 Blazing Cirrus. Michael Trofimov sent us this photo from Battle Ground, Washington, the setting sun illuminating a smear of cirrus, ice crystals 25,000 feet above the ground. 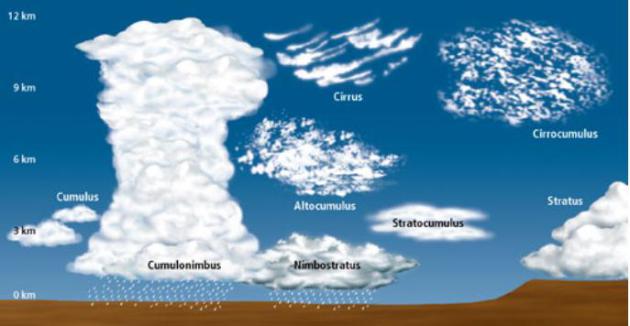 Cloud Classification. The NWS in Louisville, Kentucky has a great explanation of cloud types (classified primarily based on altitude above the ground). Late October and November tends to bring more nimbostratus and stratocumulus clouds as the cold winds of winter swirl into the USA.

U.S. Air Force Goes “Vortex Surfing” To Reduce Fuel Consumption. Yes, we have much to learn from nature. Here’s a clip of a fascinating article from gizmag.com: “The United States Air Force (USAF) is taking flying lessons from geese and spiny lobsters. This may seem like the mother of all bureaucratic errors, but there’s actually some pretty solid science behind it. In exploiting a phenomenon known as “vortex surfing,” the USAF has found that by having C-17 cargo planes flying in formation, it can reduce fuel consumption by up to ten percent….”

Climate Change And It’s Effect On Agriculture. Here’s a clip from the Marshall Democrat-News: “…Earlier planting dates are one example of change. According to an Iowa State University Study from 1981 to 2005, The Midwest has seen its average corn planting date advance by 0.40 days per year and the average soybean planting date advance by 0.49 days per year. This is a result of changes in the climate, newer hybrids and varieties and new methods to manage early season insects and diseases. Further improvements in agronomic traits and management options will occur. This will be the result of an increased understanding of a plants biology and the use of genomic sequencing and bioinformatics to understand plant biology...”