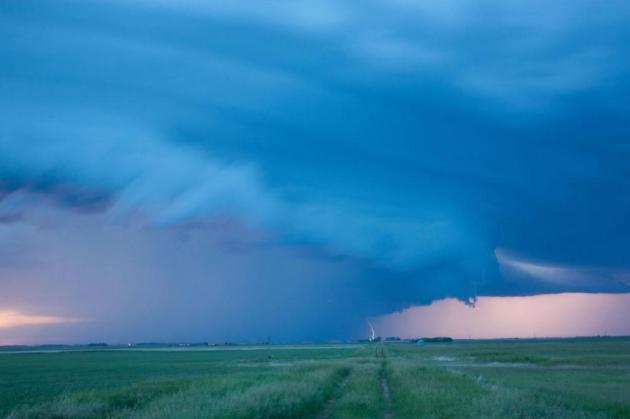 Severe Threat Today. A few storms today may spark large hail, straight-line winds over 60 mph, even an isolated tornado from Sioux Falls to the Twin Cities and Madison, WI. Details from SPC below. 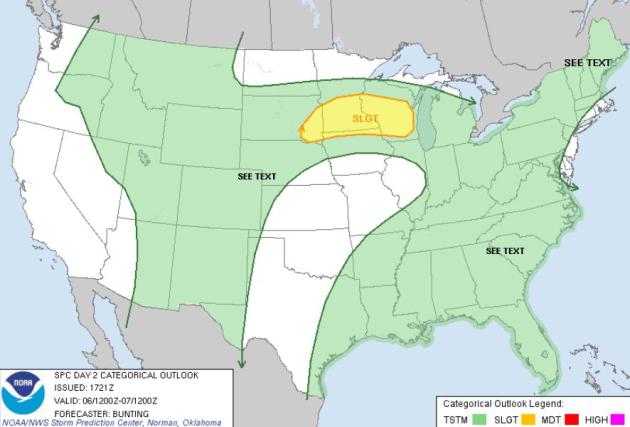 Irritable. A boundary separating 100-degree air over southern Minnesota from 80s up north, coupled with a wave of low pressure tracking across the Dakotas into northern Minnesota, may spark enough wind shear and (extreme) instability for a few severe storms today. Stay tuned for watches and possible warnings. Map: SPC.

105 F. high at Paducah, Kentucky, another record for July 5. 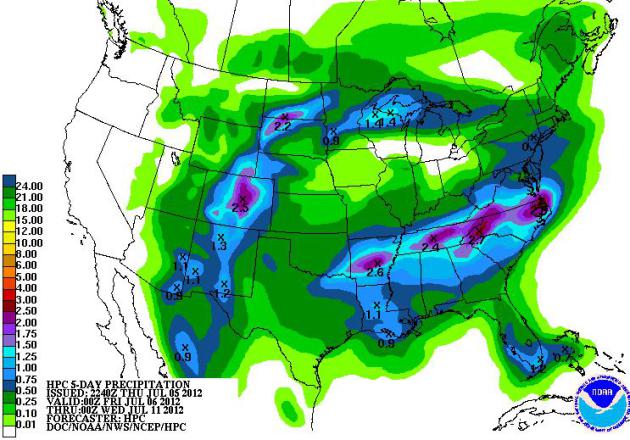 5-Day Rainfall Forecast. The latest QPF shows heavy showers and T-storms (over 2″) from Little Rock and Nashville to Atlanta and Raleigh, more heavy storms near Denver and Colorado Springs (helping to lower the fire risk). The west stays dry, the best chance of some 1″+ amounts from Duluth into northern Wisconsin and the U.P. of Michigan later today into Saturday morning. 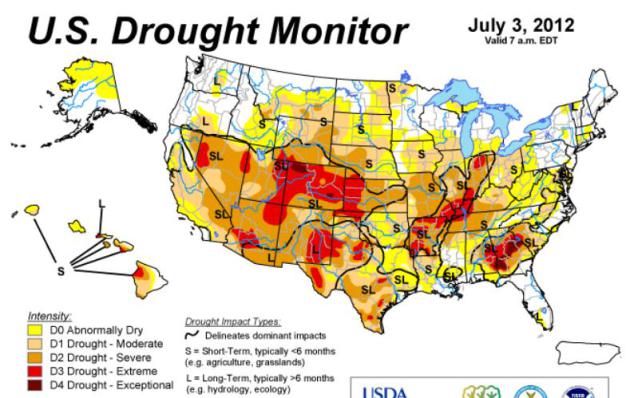 Searing Sun And Drought Shrivel Corn In Midwest. Here’s a snippet from a New York Times article about a growing drought gripping the Midwest: “….Crop insurance agents and agricultural economists are watching closely, a few comparing the situation with the devastating drought of 1988, when corn yields shriveled significantly, while some farmers have begun alluding, unhappily, to the Dust Bowl of the 1930s. Far more is at stake in the coming pivotal days: with the brief, delicate phase of pollination imminent in many states, miles and miles of corn will rise or fall on whether rain soon appears and temperatures moderate. “It all quickly went from ideal to tragic,” said Don Duvall, a farmer in Illinois who, in what was a virtually rainless June, has watched two of his cornfields dry up and die as others remain in some uncertain in-between.” 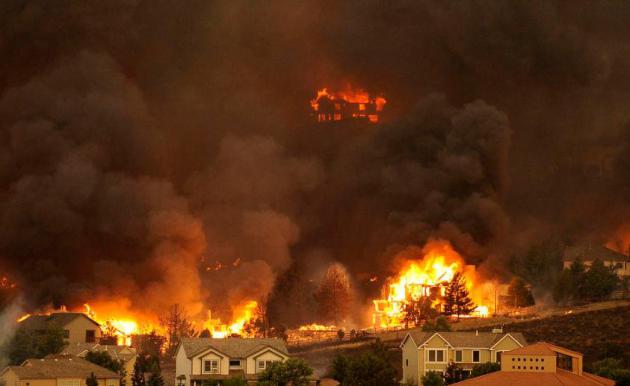 Colorado Wildfire Photos: The Waldo Canyon Fire in Colorado Springs. The Denver Post has a remarkable photo essay, including some of the most amazing (and heart-breaking) photos I’ve ever seen, related to wildfires. A tornado risk is one thing – but can you imagine a 5 mile wide wall of flames, 100 feet high, approaching your home at 40 mph? “A three-day-old wildfire erupted with catastrophic fury Tuesday, ripping across the foothills neighborhoods of Colorado Springs, devouring an untold number of homes and sending tens of thousands fleeing to safety in what was shaping up as one of the biggest disasters in state history. “This is a firestorm of epic proportions,” said Colorado Springs Fire Chief Richard Brown. The Waldo Canyon fire in El Paso County — which had been growing in the forested hills on the city’s west side — blew into an inferno late in the afternoon, raging over a ridge toward densely populated neighborhoods.”

Photo credit above: “The Waldo Canyon fire burns an entire neighborhood in near the foothills of Colorado Springs, Colo. Tuesday, June 26, 2012. Colorado has endured nearly a week of 100-plus-degree days and low humidity, sapping moisture from timber and grass, creating a devastating formula for volatile wildfires across the state and punishing conditions for firefighters.” (The Denver Post, Helen H. Richardson) 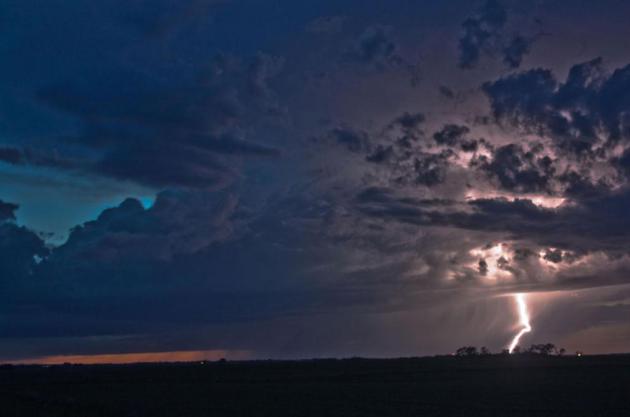 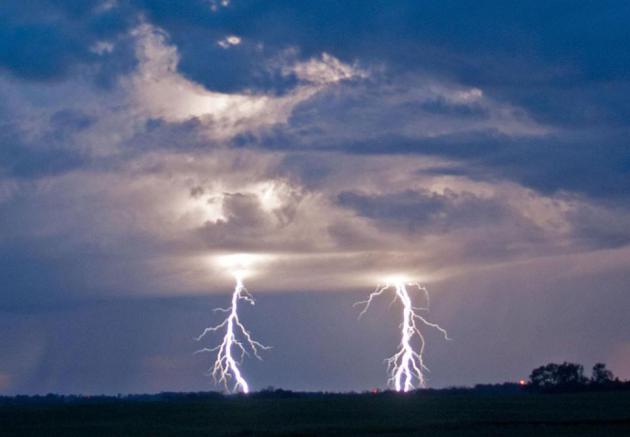 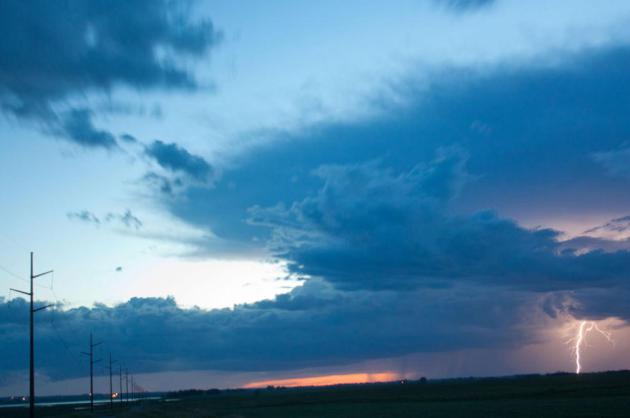 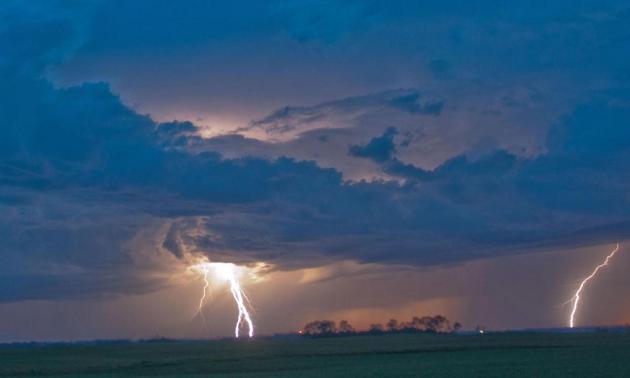 Spectacular Lightning Pics. Thanks to Warren Parsons, out in Penn, North Dakota, for sharing some incredible lightning pics – taken at a safe distance, right? Appreciate you passing these along Warren!