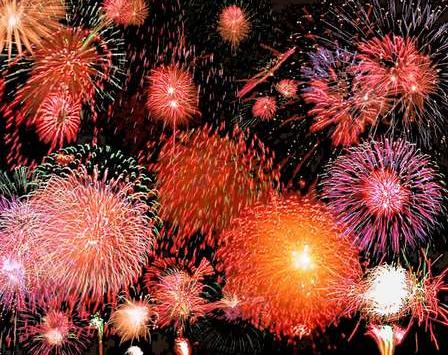 Excessive Heat Warning in effect for most of central and southern Minnesota. More from the Star Tribune.  For the latest watches and warnings you can visit the WeatherNation Website Severe Page. 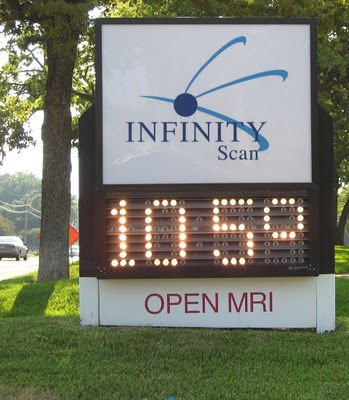 Heat Safety Tips. Please take the heat seriously – there will be problems with heat exhaustion and heat stroke later today. Here’s some timely advice from NOAA: 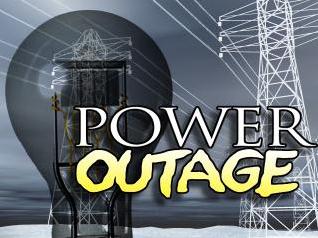 Potential For More Heat-Related Power Outages? The combination of extreme heat (and humidity) and the specter of more strong/severe T-storms into the weekend means a higher than usual potential for power outages. Here’s an excerpt from an article at The Star Tribune: “Xcel spokeswoman Mary Sandok said the high temperatures can also cause outages. High energy use and heat can add stress to the system, so there might be more outages as the hot weather continues this week. Sandok said crews are working on outages around the clock and encouraged people to reduce usage, particularly at peak  hours between the afternoon and early evening. She recommended users try to run large appliances after 10 p.m. and to keep drapes and doors closed to keep cool air in. Several thousand customers were without power yesterday because of the heat, but their power was restored before the storms.” (image: wtaq.com) 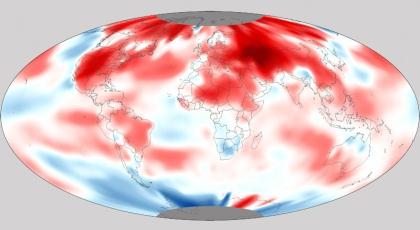 “According to the National Oceanic and Atmospheric Administration (NOAA), the period of January to May was the warmest on record for Iowa, Illinois, Wisconsin, Michigan, Indiana, Ohio and Nebraska. Minnesota and Pennsylvania ranked “much above normal.” – from The Des Moines Register; details below.

“According to federal climate data, dozens of heat records have fallen or been tied in the past week, and even more in the past month. In the past 30 days, the number of broken daily records climbed beyond 2,360, hitting nearly 35,000 over the past year.” – from an L.A. Times story; details below.

As A Heat Wave Rolls Across U.S. – Scientists Predict More To Come. Here’s an excerpt from a recent article at The Los Angeles Times: “Climate scientists have this to say about the record-breaking heat wave rippling across the country: Get used to it. This week’s spike toward triple-digit temperatures is unusual, they say. But as Earth gets warmer and greenhouse gases build, highs will keep getting higher. “There have always been heat spells,” said Glen MacDonald, the director of the UCLA Institute of Environment and Sustainability, in an interview with the Los Angeles Times. “That’s just the climate system. But … if you’re generally warming things, you have a greater chance to reach new highs. Your hot spells become even hotter than they had in the past.” 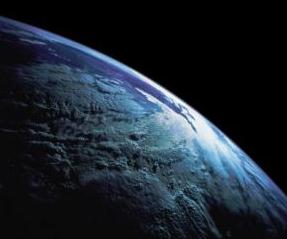 “The problem for those who dismiss climate change as a figment of scientists’ imagination, or even as a crypto-socialist one-worldish plot to take away our God-given SUVs, is that the data are beginning to add up.” – from an Op-Ed at investors.com below.

18% of Americans questioned in a recent Washington Post – Stanford poll said climate change was their #1 environmental concern, down from 33% in 2007. Details from The Washington Post below. 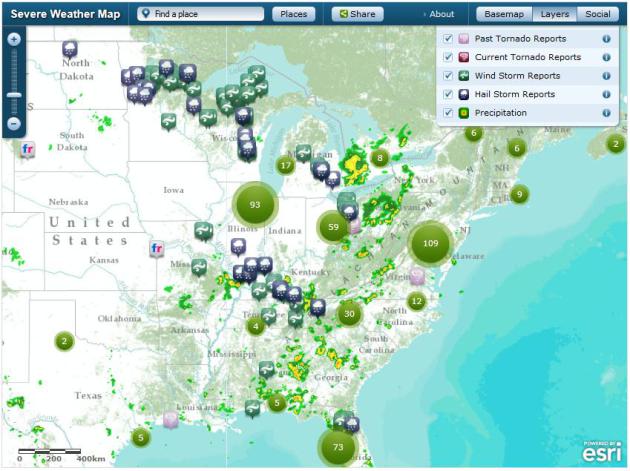 Severe Weather Visualization. The folks at ESRI have done a very good job with this interactive map, showing real-time severe storm reports: “View continuously updated US tornado reports, wind storm reports, weather warnings, and precipitation. See the real-time effects of the storm via social media posts. To change the search terms, go to the Social menu, click the settings icon, and update the keyword. For media inquiries, contact us at newsmaps@esri.com.” 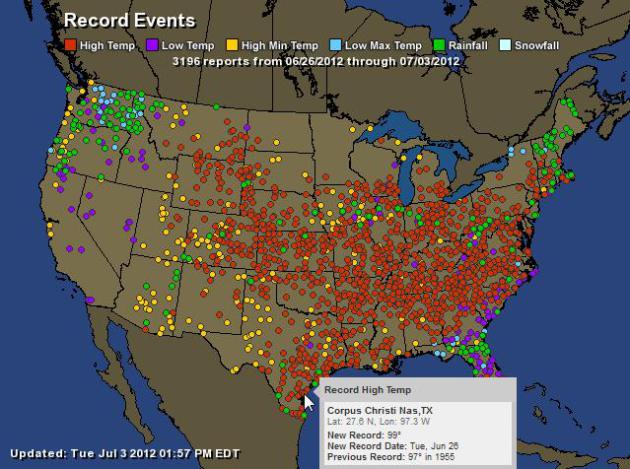 Heat Wave of 2012. Of the 3,051 records set in the last week, 1,860 were high temperature records; from the Rockies to the East Coast, records are falling left and right. Here’s a breakout of the records, courtesy of NOAA and Ham Weather:

In One Kansas Town, Even Hotter Than Usual. 115 F. air temperature at Hill City, Kansas last week? Hotter than Death Valley, California? The New York Times has more details; here’s an excerpt: “For five days last week, a brutal heat wave here crested at 115 degrees. Crops wilted. Streets emptied. Farmers fainted in the fields. Air-conditioners gave up. Children even temporarily abandoned the municipal swimming pool. Hill City was, for a spell, in the ranks of the hottest spots in the country. “Hell, it’s the hottest place on earth,” Allen Trexler, an 81-year-old farmer who introduced himself as Old Man Trexler. He spoke while standing in the shade of a tree on Saturday morning, the temperature  already sneaking toward 100.” 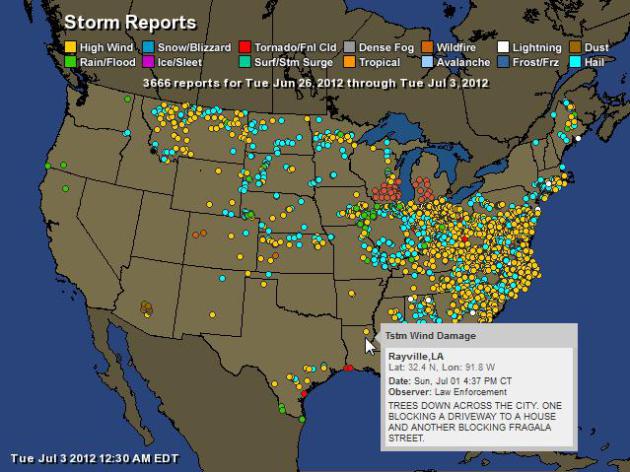 A Week’s Worth Of Storm Reports. NOAA reports 3,666 storm and excessive heat reports in just the last 7 days. There were 2,374 severe (straight-line) wind reports in one week – I’ve never seen anything like this, certainly not in mid-summer. For an interactive map from Ham Weather click here. Here’s a breakout: 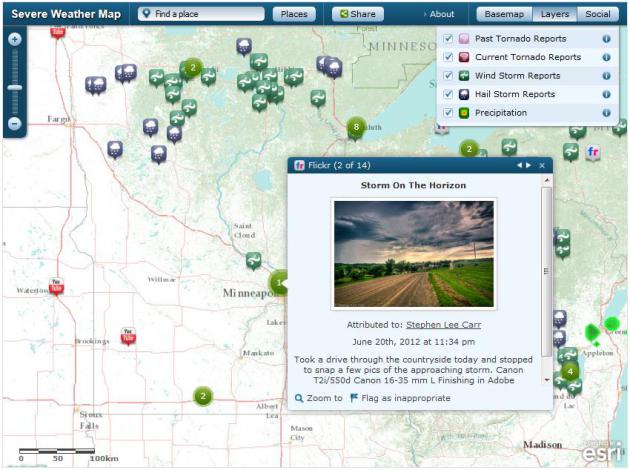 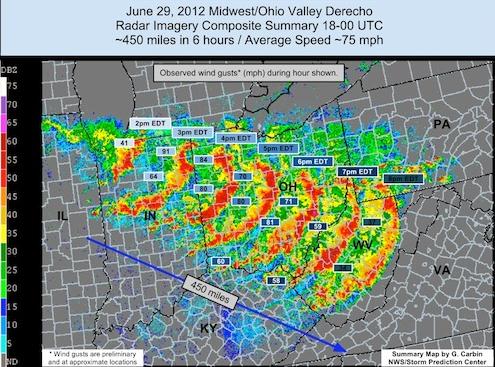 D.C. Derecho: Storm That Hit Capital Was Fast, Destructive – And Rare. Here’s an excerpt of an article reprinted by The Washington Post at The Seattle Times – from meteorologist Jason Samenow: “It’s a hurricane. It’s a tornado. No, it’s a derecho. Only a meteorologist was likely to have made the right guess about the violent storm system that hit the Washington, D.C., area Friday night. Derechos occur only about once every four years in the District of Columbia area, according to the National Weather Service. They are more likely in the Midwest and Great Lakes, between May and July. A derecho is a fast-moving, long-lived, large, violent thunderstorm complex. By definition, it creates wind damage along a swath of more than 240 miles and produces wind gusts of at least 58 mph.” (Image above: SPC). 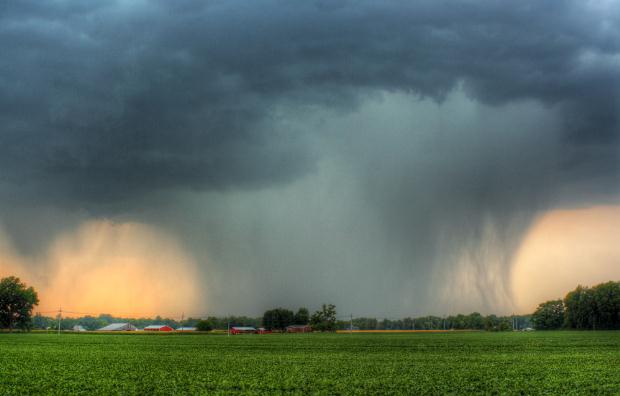 Photo Of The Day. The very definition of a summer thunderstorm and rain/hail shaft. Thanks to Mike Hall in Lewisport, Kentucky for sending this in.

Oops. My bad. Thanks to someecards.com for sending this along. 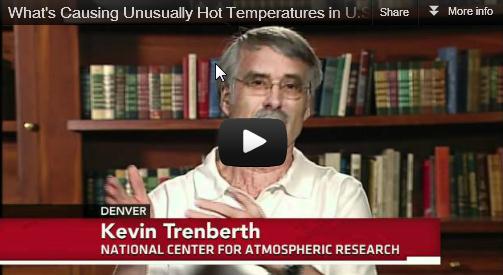 What’s Causing Unusually Hot Temperatures U.S.? Can we pin some of these extremes on a warmer atmosphere, or is all this (atmospheric insanity) just normal, random weather. Most climate scientists believe we passed normal a long time ago. Here’s an excerpt of an interview on Monday’s PBS Newshour with Judy Woodruff:

JUDY WOODRUFF: “And when you say — you used the term no parallel. You literally meant that?”

KEVIN TRENBERTH: “I don’t think there has been anything quite like this before. Back in the 1930s, the Dust Bowl era was very hot and dry. But, you know, I mean, every year is somewhat exceptional. Last year, of course, there was heat waves and all kinds of wildfires in — centered in Texas, Arizona, New Mexico. And it was extraordinarily hot in Oklahoma. The previous year, it was in Russia. In 2009, there were exceptional conditions in Southern Australia, in the Melbourne area. And so these areas where the really hot and dry conditions leading to wildfires has — is moving around. We certainly don’t expect them to occur every year, but we do expect more of them. The odds are changing for these to occur with climate change, with the global warming from the human influences on climate.” 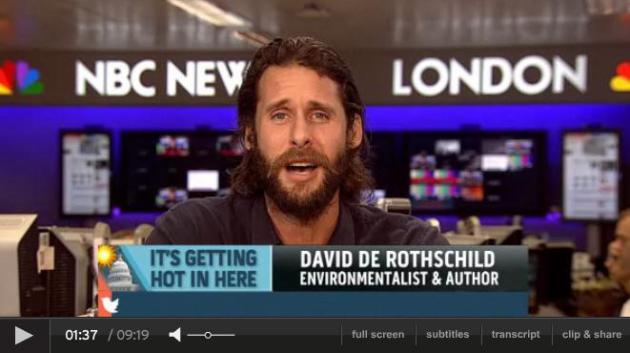 Summer Heat Wave An Early Indication Of Global Warming. Here’s a video clip from msnbc.com: “Climate change is driving temperatures up around the country, but are conservatives ignoring all the talk of global warming? MSNBC’s Alex Wagner talks to author and environmentalist David De Rothschild about what the heat means for the Earth, and what we should be doing to prepare for future erratic weather.” 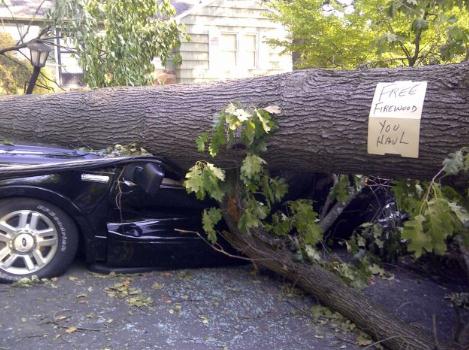 This Summer “Is What Global Warming Looks Like.” The story from AP and seattlepi.com – here’s an excerpt: “Is it just freakish weather or something more? Climate scientists suggest that if you want a glimpse of some of the worst of global warming, take a look at U.S. weather in recent weeks. Horrendous wildfires. Oppressive heat waves. Devastating droughts. Flooding from giant deluges. And a powerful freak wind storm called a derecho. These are the kinds of extremes experts have predicted will come with climate change, although it’s far too early to say that is the cause. Nor will they say global warming is the reason 3,215 daily high temperature records were set in the month of June. Scientifically linking individual weather events to climate change takes intensive study, complicated mathematics, computer models and lots of time. Sometimes it isn’t caused by global warming. Weather is always variable; freak things happen.”

Photo credit above: “A tree sitting atop a vehicle offers free firewood in Falls Church, Va., Monday, July, 2, 2012, as cleanup continued after Friday’s storm, Around 2 million utility customers are without electricity across a swath of states along the East Coast and as far west as Illinois as the area recovers from a round of summer storms that has also caused at least 17 deaths.” Photo: Matthew Barakat / AP