Heat Breaks In Some Locations (on track for hottest summer on record for USA?) 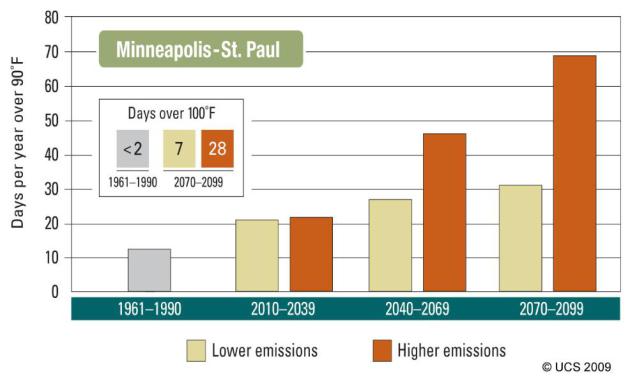 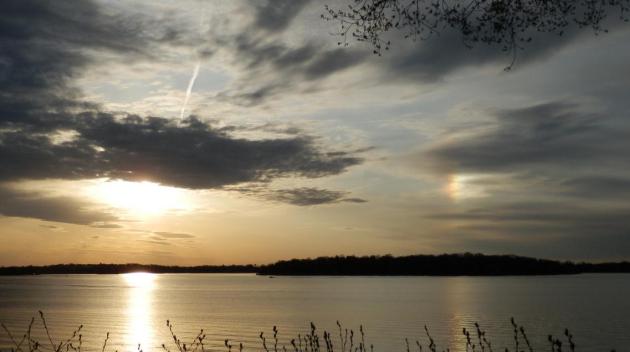 “At some point…extreme weather events will have become sufficiently common to convince any person of reason that global warming has begun.” – from a story on climate change by Doug Craig at redding.com below. 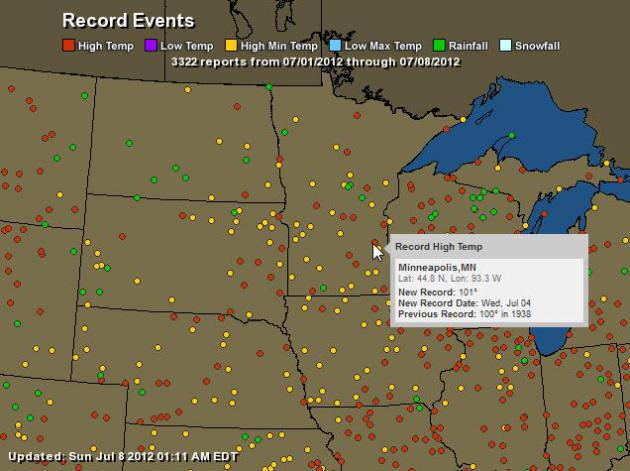 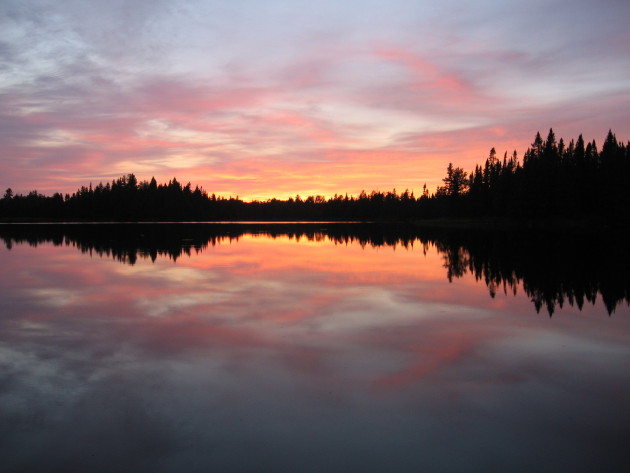 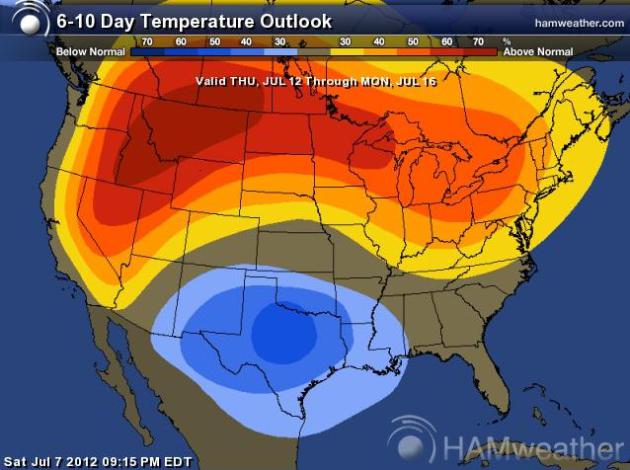 Lingering Warm Bias. The 6-10 Day Extended Temperature Outlook from NOAA’s Climate Prediction Center (CPC) shows extreme heat spreading into much of the Pacific Northwest, Northern Rockies – more heat aimed at the Dakotas and Minnesota the latter half of this week (but right now I don’t see 100 F). We’ll have to be content (?) with mid 90s. Hot enough. Map courtesy of Ham Weather. 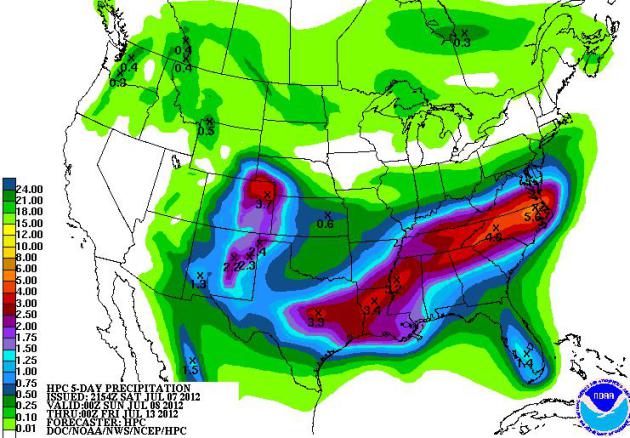 Dry Spell. A dry week is shaping up for most northern tier states, the best chance of heavy rain and embedded T-storms from Houston and Little Rock to Knoxville, Asheville and the Outer Banks – some 2-5″ amounts are possible. QPF map courtesy of NOAA HPC. 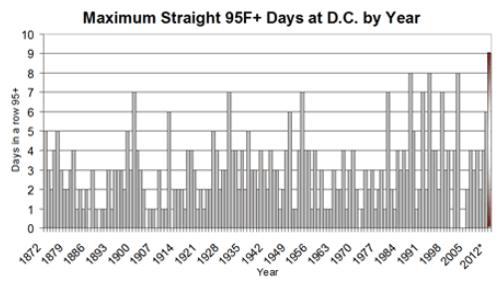 The Longest, Hottest Heat Wave. D.C. Records 9th Straight 95+ Day. Some amazing details on the (historic) heat wave from The Washington Post’s Capital Weather Gang: “For the 9th straight day, Washington, D.C. has met or exceeded 95 degrees (officially 95 at 11:25 a.m., 96 is the high so far today). In 141 years of records, this is a first. And the streak is likely to be extended to 11 after Saturday and Sunday. This record is just one of countless extraordinary heat records established over the course of the last three summers.”

Graphic credit above: “Number of consecutive days at or above 95 degrees in Washington, D.C. since 1872.” (Ian Livingston) 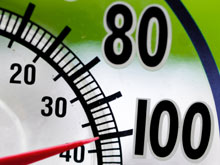 From NOAA in Washington D.C.:

From The Capital Weather Gang:

8:25 pm update: It’s likely we’ve established at least two additional records today at Reagan National. 1) Highest low temperature for the date of 82, two degrees above the old record of 80 from 2010 (assuming it doesn’t drop below that before midnight). 2). Highest average temperature for any calendar day on record (all-time) of 94 F. 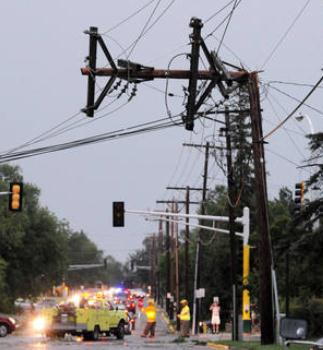 Gridlock: Storms, Blackouts Expose Power Problems. Our infrastructure is increasingly vulnerable to blackouts from super-sized thunderstorms, as explained in this NPR article; here’s an excerpt: “As hundreds of thousands swelter without power a week after a violent storm pummeled the Midwest and Mid-Atlantic, energy experts say the future will look even worse if the nation’s aging, congested electrical grid isn’t upgraded. Customers chafe at rising utility bills, but the energy industry warns that the alternative is even scarier: Unless $673 billion is invested in the system, it could break down by 2020, according to an American Society of Civil Engineers report released in April. The grid’s dependability has become an increasing concern as the system strains to meet increased demand. Bottlenecks in the grid and equipment failures are causing more brownouts and blackouts, energy experts say.”

Photo credit above: Monte Draper/AP. “A power pole is bent after severe storms hit the Bemidji, Minn., area on Tuesday, knocking down thousands of trees and causing extensive damage to utility lines. Thousands of customers were left without power.“ 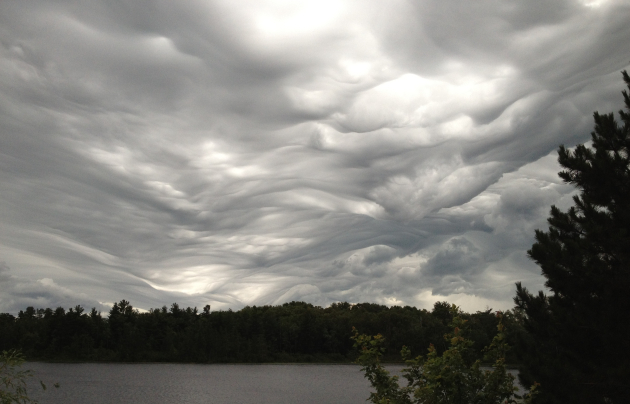 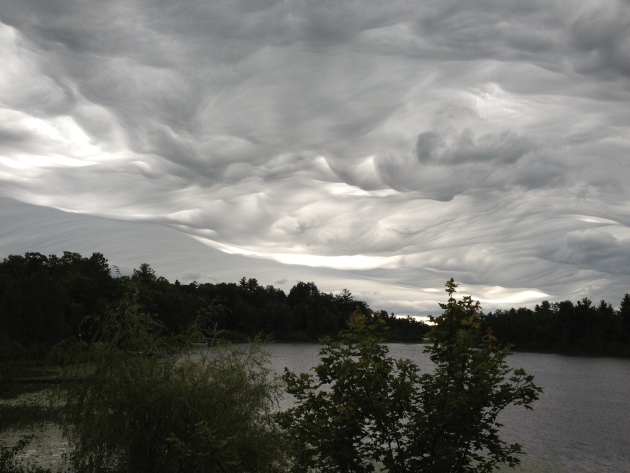 Photo Of The Day: “Undulatus Asperatus”. Thanks to Paul Schroeder for sending in an amazing example of undulatus asperatus, which is a recently discovered cloud type, an exotic wave cloud formed by extreme turbulence and temperature inversions (temperatures warming with altitude). He snapped this photo near Hayward, Wisconsin Saturday morning. 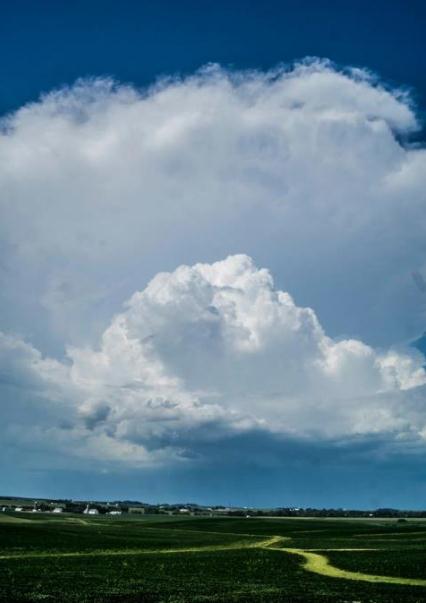 Cumulonimbus. Thanks to Paul Brooks, a prolific storm chaser, who heads up PBrooks Photography. A link to the photo and his company via Facebook. This shot was taken north of Bennett, Iowa.

Is Your Computer Infected With DNS Malware? I know, I was skeptical too (more like paranoid to click on anything I don’t know or trust), but this is a legitimate concern, and using the link below you can (safely) check your PC or Mac to see if you’re infected. 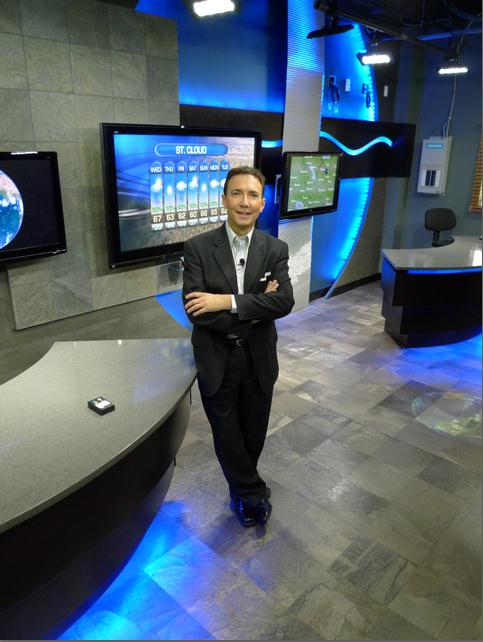 Today’s highlighted question is a good one: how do we (as meteorologists) grade ourselves? How does “verification” really work? Every meteorologist, to some degree or another, uses their own metrics to evaluate what they believe to be an accurate forecast. If you’re withing 2-3 F. of the predicted temperature, that usually fits the definition of an accurate forecast. Precipitation is much trickier, especially in summer. If the forecast calls for “partly sunny with isolated thundershowers” and it doesn’t rain at your house, but a town 10 miles away gets dumped on, is that an accurate forecast? All weather is local. Everyone cares about their home, their neighborhood, but during a typical summer afternoon it may only rain on 10-30% of the state.

“I read your narrative in the StarTribune June 22, 2012 weather column.  You stated that the national accuracy for a 24-hour forecast is 87%.  This prompted me to reach back and read a paper I wrote in Feb 1999 that looked at a small slice of weather data for the previous year.  That paper was written in response to similar accuracy questions I had at the time.  I still have the same questions today.  For instance, what weather variable(s) does the 87% refer to? – high temperatures, low temperatures, humidity (dew factor), sun, wind, rain, etc?.  Under what parameters is the accuracy calculated?

I have attached the paper (Weather.docx) and and some supporting graphs (hi_lo_tm.xlsx) based on the data I collected.  I know you are a very busy man, but I hope you will find time to read the paper and comment on my questions above.”

Warren – thanks for your note and the work you put into the white paper/spread sheet. The 87% number is the generally agreed upon metric for 24 hour accuracy (averaging all forecasts, NOAA and private sector). I can’t find a paper or link to support that number, but I’ve heard it batted around now for nearly 30 years – and (interestingly) ithat 87% number hasn’t improved during that period, in spite of (significant) gains for Day 2-7. I forwarded your question to the local NWS office in Chanhassen and here is their response: 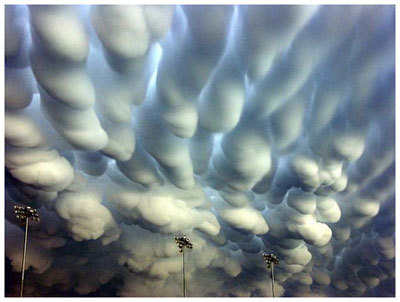 “We use a few different methods internally to try and gauge our accuracy. The forecasters look at verification information frequently, since it is tough to improve if one doesn’t know how well he/she is doing. Plus, we view detailed verification of the various model guidance, since knowing what is working best makes it easier for us to do well, since we can work from the “best” starting point. The majority of our verification is now done in a gridded manner, such that we verify things at each 2.5×2.5 km. grid box for which we produce a forecast (for the National Digital Forecast Database). The “truth” which we verify against is a combination of the Real-Time Mesoscale Analysis (RTMA) combined with all available observations (METARS, mesonet data, etc).

In the past, verification was only done for specific points, and could be misleading on how the overall forecasts were performing across the entire area. For temperatures, a common metro we use to judge our accuracy is the measure of the percentage of the entire forecast area (evaluated at each grid point) for which the error is <3 degrees F. As an example, over the past 30 days, our forecasts (MPX) for our area for low temperature the following night (i.e. the forecast issued today for tomorrow night) have had an overall error of <3 degrees F for 70.1% of the area, with 0% having an error >10 F. 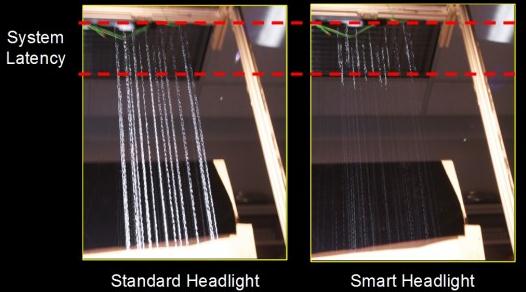 Experimental Headlight Can See Through Rain And Snow. I thought this story from gizmag.com was interesting; here’s an excerpt: “Driving at night in falling rain or snow can be treacherous, but not just because the asphalt is slippery – visibility is also greatly reduced, as the driver’s view of the road ahead is obscured by brightly headlight-lit raindrops or snowflakes. In the future, however, that may not be so much of a problem. A team led by Carnegie Mellon University’s Prof. Srinivasa Narasimhan has developed an experimental headlight system that renders most foreground precipitation virtually invisible, while still adequately illuminating the road beyond.” 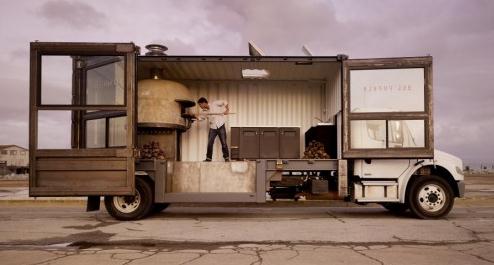 Forget The Ice Cream Truck, This One Makes Wood-Fired Pizzas! This might work in….California? Details from gizmag.com: “Del Popolo’s is a traveling pizza truck located in San Francisco, that features an impressive wood-fired pizza oven. The mobile restaurant has been constructed from a recycled shipping container which has been completely remodeled to include a modern kitchen workspace and two large glass doors that open out to the public.” 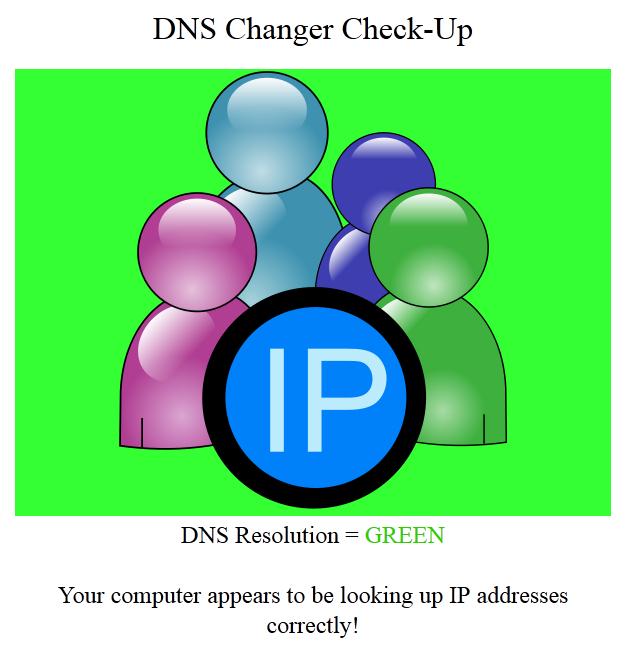 Is Your Computer Infected? I know – it sounds like one of those scams you DON’T want to click on, but this is legit. According to the FBI there is a lot of malware out there that may prevent hundreds of thousands of Internet users from accessing the web on Monday. To see if your computer is infected click here (I did it with my PC – no problems). It’s a little additional peace of mind on a Sunday. Service provided by emergencyemail.org. (Thanks Pete!)