Heat Wave of 2012 Gets Bigger, More Intense and a Fire Update 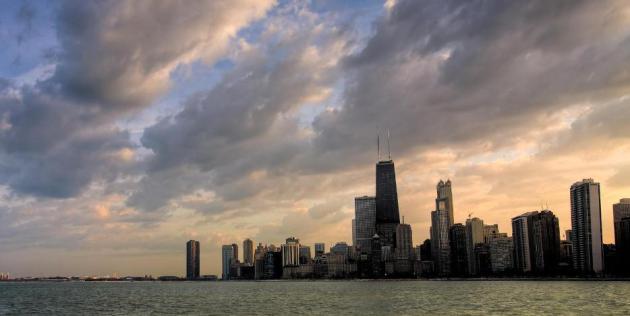 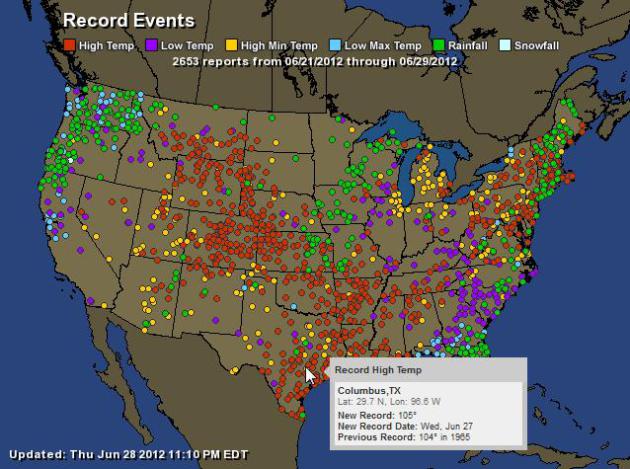 Over 1,000 Record Highs In One Week. The heat wave is growing more intense, expanding east, and will be a fixture for at least the next 7-10 days. Map above courtesy of NOAA and Ham Weather. Details: 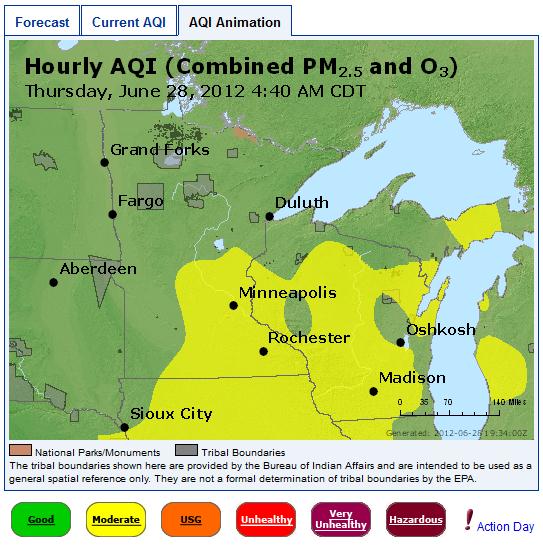 At-risk populations: Ozone is expected to near a level that is considered unhealthy for sensitive groups. Those sensitive to ozone include people with preexisting respiratory conditions, the elderly, children, and individuals who participate in outdoor activities requiring extended or heavy exertion. These individuals are encouraged to postpone or reduce vigorous outdoor activity, or schedule outdoor activity in the morning, when ozone levels are lower. Even persons who are otherwise healthy may experience health effects when ozone levels increase.

Health impacts: Elevated levels of ozone have been linked with respiratory health effects. Exposure to high levels of ozone may exacerbate preexisting health conditions. High ozone levels may make it more difficult to breathe deeply and vigorously, cause shortness of breath and breathing discomfort, and result in coughing and a sore or scratchy throat. If you experience these symptoms, contact your physician.

* map above from airnow.gov – click on this link for the latest numbers for the Twin Cities 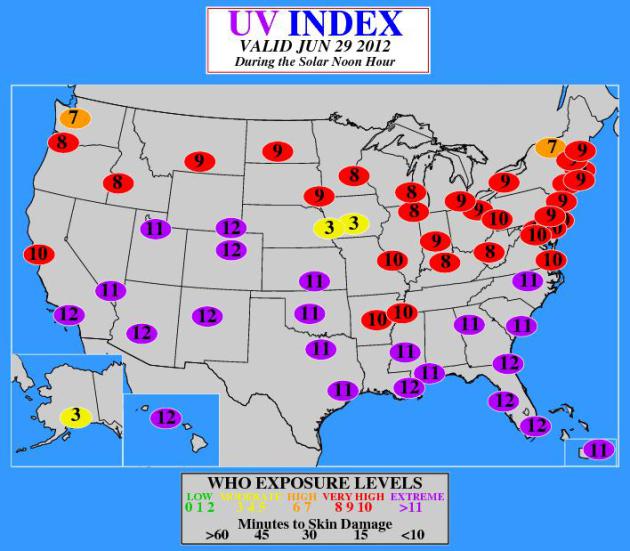 What Is The UV Index? I know – one more thing to worry about, but all of us should pay attention to the UV (ultraviolet) Index, to lower the risk of not only sunburn, but melanoma. More from NOAA’s CPC: “The UV Index is a next day forecast of the amount of skin damaging UV radiation expected to reach the earth’s surface at the time when the sun is highest in the sky (solar noon). The amount of UV radiation reaching the surface is primarily related to the elevation of the sun in the sky, the amount of ozone in the stratosphere, and the amount of clouds present. The UV Index can range from 0 (when it is night time) to 15 or 16 (in the tropics at high elevations under clear skies). UV radiation is greatest when the sun is highest in the sky and rapidly decreases as the sun approaches the horizon. The higher the UV Index, the greater the DOSE RATE of skin damaging (and eye damaging) UV radiation…..There are two prices to pay for overexposure to UV radiation: a severe sun burn following an intense short term overexposure, and the more serious skin cancers developing after long term overexposure. MELANOMA, the more deadly of the two types of skin cancer, occurs when the patient has been subjected to several intense short term overexposures. 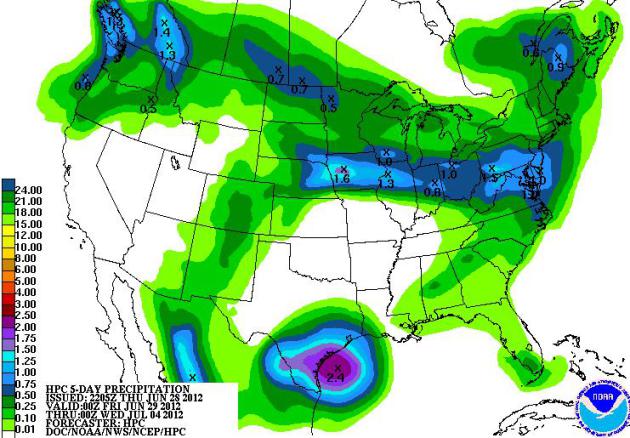 QPF. The 5-Day rainfall prediction from NOAA shows heavy rain for south Texas, and a band of potentially moderate showers and T-storms stretching from Des Moines and Chicago to Washington D.C. and Philadelphia. The Central Plains and much of the west stay dry, and stinking hot. 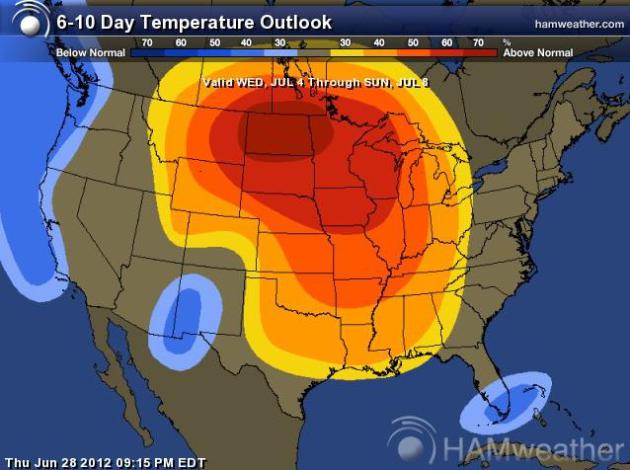 Troubling Trends. Here is some additional information from the scientists and journalists at Climate Communication: “As a heat wave sweeps across much of the country and wildfires rage in the West, many are wondering about the connection between these types of extreme weather events and climate change. Climate Communication has put together “Heat Waves and Climate Change”, a summary of the latest peer-reviewed literature on climate change and the recent increase in temperatures – a contributing factor to wildfires.

Some facts from “Heat Waves and Climate Change”:

– Since 1950 the number of heat waves worldwide has increased, and heat waves have become longer.

– In the past several years, the global area hit by extremely unusual hot temperatures has increased 50-fold.

– In the U.S., the rise in heat-trapping gases in the atmosphere has increased the probability of record-breaking temperatures 15-fold.

– By the end of this century, a once-every-20 year heat wave is projected to occur every other year. 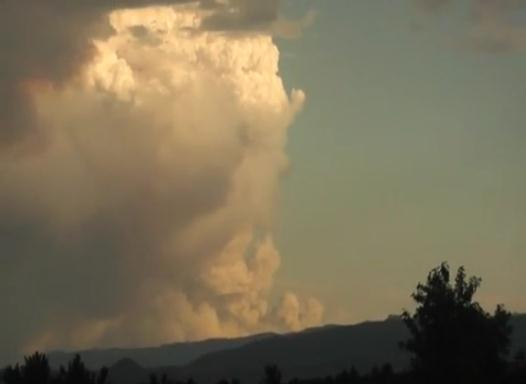 Waldo Canyon (Colorado Springs) Blow-Up. Here’s a remarkable YouTube clip, showing the scale of the blaze, courtesy of bburtt1: “Waldo Canyon blow up Tuesday 6/26/2012 – Colorado Springs. Video from our bedroom window 60+ miles to the north of the fire in Lakewood Colorado. I have been on a few hot fires like this in Calif. and Montana but this one was really gobbling with 60+ mph winds behind it. Tough year here in Colorado!!” 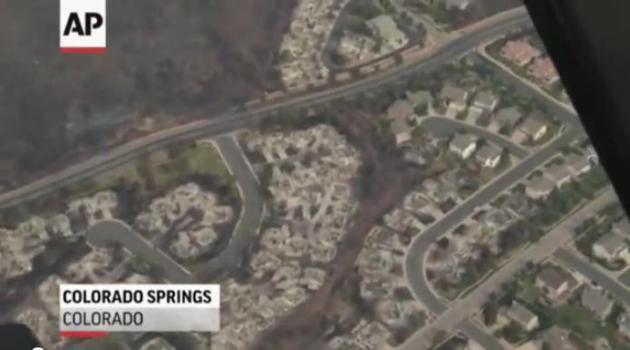 Fiery Aftermath. As destructive as an (unimaginable) 10-20 mile wide EF-5 tornado, a wall of flames consumed the Mountain Shadows neighborhood, just northwest of downtown Colorado Springs – details and a YouTube video from AP: “Firefighters in Colorado Springs are struggled to gain control after a forest fire that started west of the city. An AP aerial tour of one neighborhood showed hundreds of heavily damaged or destroyed homes as well as charred forests.” 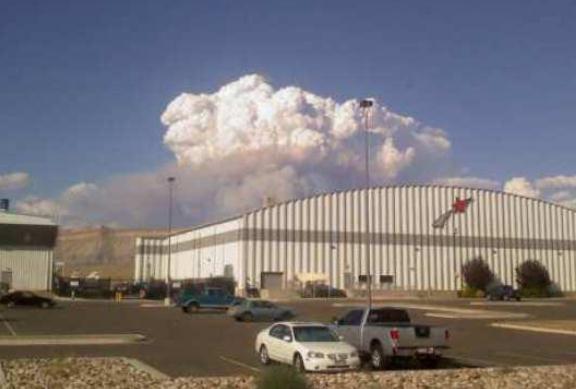 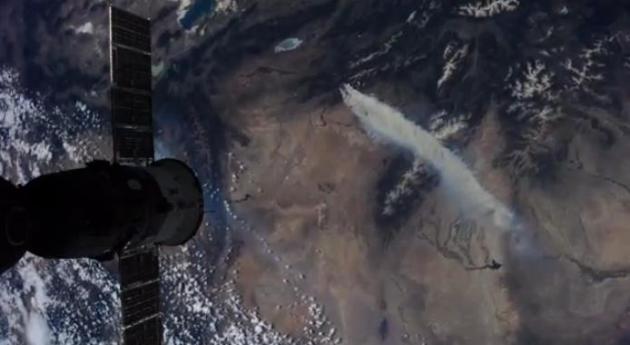 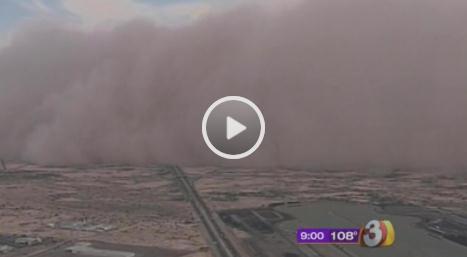 Another Duststorm Blows Through Phoenix Area. AZFamily.com has the story, and some amazing video: “Another dust storm blew through the Phoenix metropolitan area and parts of southern Arizona on Wednesday evening. The massive wall of dust was more than 3,000 feet high and 10 to 15 miles wide. The storm did cause flight delays of 15 to 30 minutes at Phoenix Sky Harbor Airport. National Weather Service meteorologists said the latest dust storm limited visibility on some areas of Interstate 10 to less than 1 mile.” 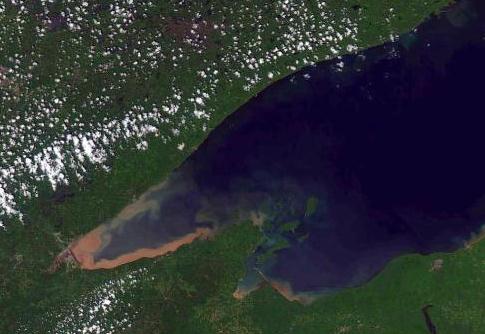 Flood’s Mud Clouds Lake Superior. I pointed this out a few days ago – looking at NASA’s MODIS high-res imagery it was hard not to miss the muddy runoff from the recent historic rains in the Duluth area. Here’s an update from The Star Tribune: “The rain that flooded Duluth last week also flushed an unprecedented quantity of dirt, pollution and bacteria into Lake Superior — enough to make experts worry about the long-term environmental consequences on the largest and clearest of the Great Lakes. One day after the storm, sediment runoff made the lake opaque for miles along the shore, local researchers say. Satellite photos show a wide swath of mud streaming into the lake from the Duluth harbor almost all the way to the Apostle Islands. “We don’t know what’s going to happen because we’ve never seen this,” said Elizabeth Austin-Minor, an associate professor of chemistry at the University of Minnesota Duluth’s Large Lakes Observatory.” 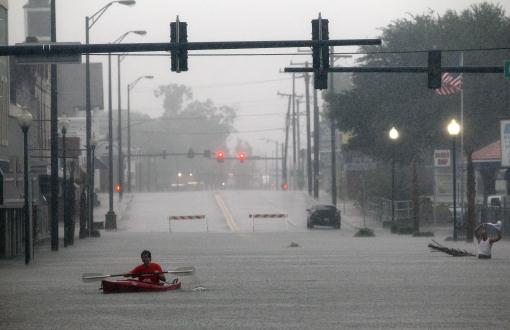 Debby Floods Neighborhoods In Northern Florida. As much as 25-30″ of rain fell in the Tallahassee area – here’s an excerpt from an AP summary of Debby’s rainy wrath: “Debby destroyed homes and businesses, washed away roads and flooded neighborhoods in Florida before the once-large tropical storm drifted out to sea Wednesday, leaving behind a sopping mess. At least three people were killed in the storm. More than 100 homes and businesses were flooded and officials warned that the waters may not recede until next week in some places. The storm knocked out power to hundreds of thousands of customers, though most had electricity restored by the time Debby left the state. The tropical storm formed in the Gulf of Mexico on Saturday and gradually made its way across the Florida, drenching the state for several days before it weakened to a depression. The windy, rainy weather ruined vacations for some.”

Photo credit above: “A man paddles through flood waters from Tropical Storm Debby in downtown Live Oak, Fla. on Tuesday, June 26, 2012. The National Hurricane Center says Debby has weakened to a tropical depression as it continues to move across Florida, bringing flooding to many areas.” (AP Photo/The Gainesville Sun, Matt Stamey) 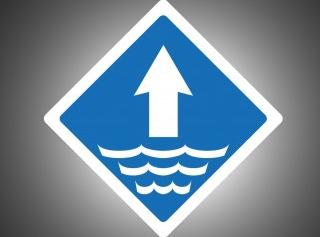 Post-Flood Health Risk Warning. Here’s more on the aftermath of Debby’s drenching rains, and lingering concerns for the Sunshine State, from winknews.com: “TALLAHASSEE, Fla.- The State Emergency Response Team (SERT), with the Florida Department of Health, encourages Floridians to use caution as flooding and standing water form as a result of the heavy rains from Tropical Storm Debby, now a post-tropical cyclone. “We urge residents and visitors in affected areas to take precautions to conserve water and protect themselves and their families from potential health risks presented by storm surge and floodwaters,” said State Coordinating Officer Bryan W. Koon. “As the SERT continues to respond to the impacts of Tropical Storm Debby, life safety is our first and foremost concern and Florida’s residents and visitors should continue to heed instructions from local officials.” 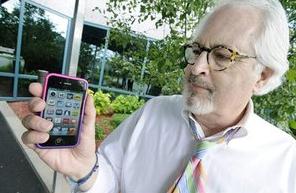 Weather Alerts Coming Soon To Smartphone Near You. More on free text alerts from NOAA at philly.com; here’s an excerpt: “MINNEAPOLIS – Millions of smartphone users will soon begin receiving text messages about severe weather from a sophisticated government system that can send a blanket warning to mobile devices in the path of a dangerous storm.The National Weather Service’s new Wireless Emergency Alerts system offers a new way to warn Americans about menacing weather, even if they are nowhere near a television, radio or storm sirens. Beginning Thursday, the system will notify people about approaching tornadoes, hurricanes, blizzards and other threats. When a warning is issued for a specific county, a message of no more than 90 characters will cause late-model smartphones in that area to sound a special tone and vibrate.”

Photo credit above: “Bob Burns holds his smartphone Wednesday, June 27, 2012 in Minnetonka, Minn. Millions of smartphone users wiil soon begin receiving text messages about severe weather from a sophisticated government system that can send a blanket warning to mobile devices in the path of a dangerous storm.” (AP Photo/Jim Mone) 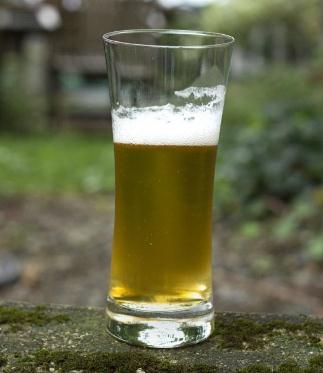 How To Get Rid Of Mosquitoes: Testing 11 Homeade Remedies. I thought this might be a useful nugget (for everyone). With the recent monsoon rains the bug situation is pretty bad out there. Here’s an excerpt of a timely slide-show from stylelist.com: “Reach for the calamine lotion, it’s mosquito season. Mosquitoes are out in full force right now because warm weather allows a mosquito egg to become an adult in less than a week. Mosquitoes can infect millions of people every year and this year may especially be a doozy due to the mild winter we had. And with over 150 species of mosquitoes in North America (over 3,000 in the world), these pesky critters can really put a damper on summer fun! The thing is, we’re not always huge fans of conventional mosquito repellants on the market, which often irritate the skin. In the interest of seeing if there are chemical-free remedies, we’ve tested the following ways to get rid of mosquitoes. What worked and what should be left to the garden? Click through our slideshow to find out.”