90-Day temperature outlook calls a hotter than average summer for much of the USA. The CPC/Ham Weather prediction below.

“Debby” may be forming in the Gulf of Mexico – NHC now predicts a 70% probability of tropical storm formation. Details below. Enhanced IR loop courtesy of WSI’s intellicast.com. 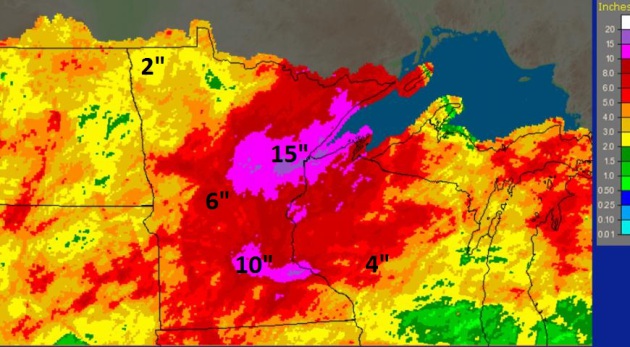 Off The Charts. The NOAA map above shows Doppler radar rainfall estimates for the last 30 days; over 15″ near Duluth, and just southeast of the Twin Cities, from Cannon Falls to Hastings. Meanwhile moderate drought conditions linger over Minnesota’s Red River Valley. 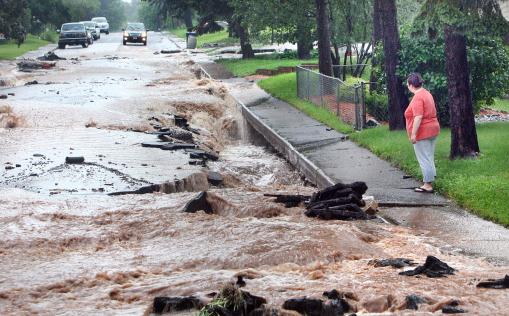 What Just Happened? 10″ of rain in less than 48 hours? You might expect that in Manila or Fiji, but the North Woods of Minnesota? Details: “A neighborhood resident looks at a flood-damaged road in Duluth, Minn., Wednesday morning, June 20, 2012. Torrents of rain and floodwater cut away part of the roadbed. (AP Photo/Duluth News Tribune, Bob King).” 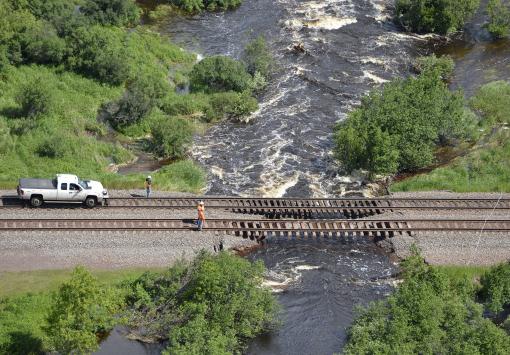 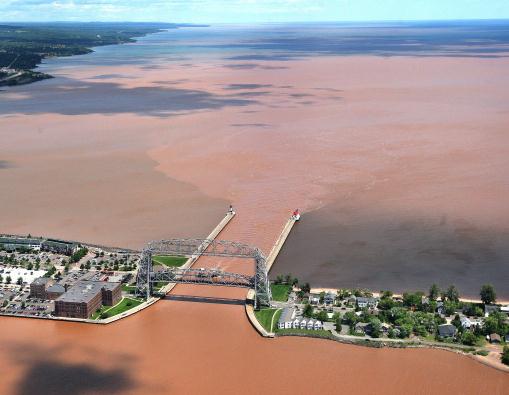 Serious Runoff. The amount of rainwater running off into Lake Superior is staggering. Details: “Clay-laden waters from the Duluth-Superior Harbor Basin pour out past the Aerial Left Bridge, through the ship canal and into Lake Superior on Thursday afternoon, June 21, 2012, in Duluth, Minn. Minnesota Gov. Mark Dayton, who toured flood-ravaged areas on Thursday, said he was committed to providing state resources, and would work to speed the process of getting appropriate federal aid. Duluth’s mayor, Don Ness, estimated that there was $50 million to $80 million in damage caused to the city’s public infrastructure alone. (AP Photo/Duluth News Tribune, Bob King).”

Northeastern Minnesota Flooding Information. Here is a good list of resources to keep up to date with what’s happening in the Duluth area, courtesy of HSEM, The Homeland Security and Emergency Management: 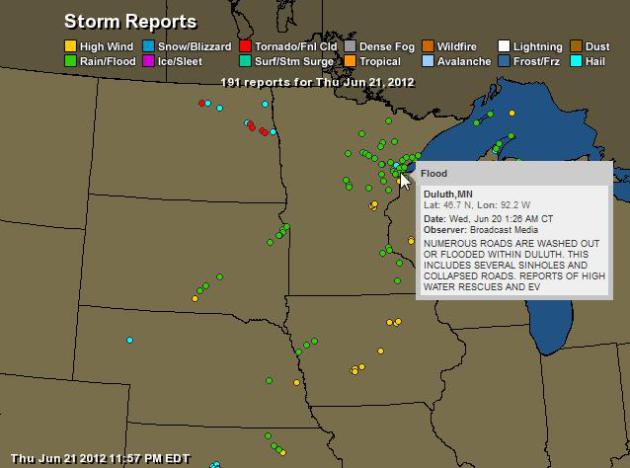 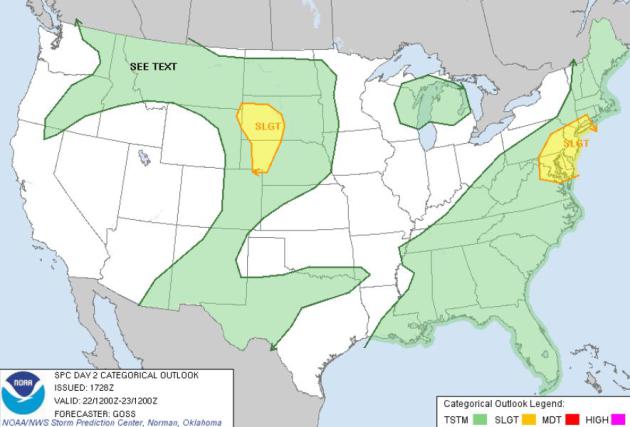 Friday Severe Threat. SPC is highlighting two areas to watch later today: the Dakotas, and a heavily populated region in the Northeast, from D.C. to Philadelphia, New York and Hartford – strong to severe storms helping to break the heat as cooler, Canadian air sweeps east. 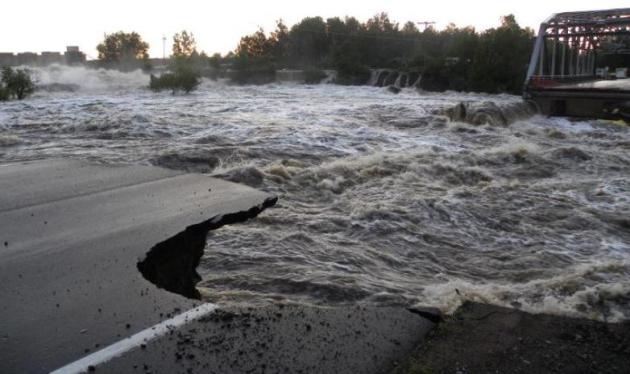 Highway 210 Washed Away. Here’s the latest from MnDOT: “New photo of HWY 210 near Carlton. The St. Louis River washed out HWY 210 leading up to the Thomson Bridge. Photo Courtesy of Minnesota Department of Transportation.” 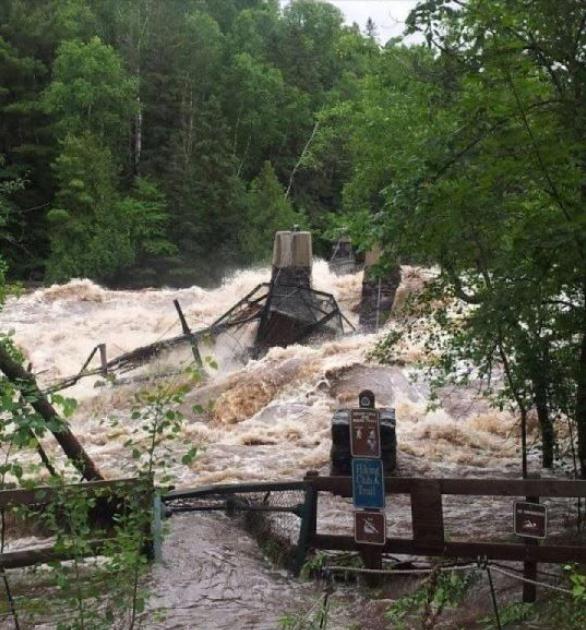 Swinging Bridge Is Gone. Leslie Munchho at Minnesota State Parks and Trails reports that Swinging Bridge is washed away at Jay Cooke. More via Facebook. 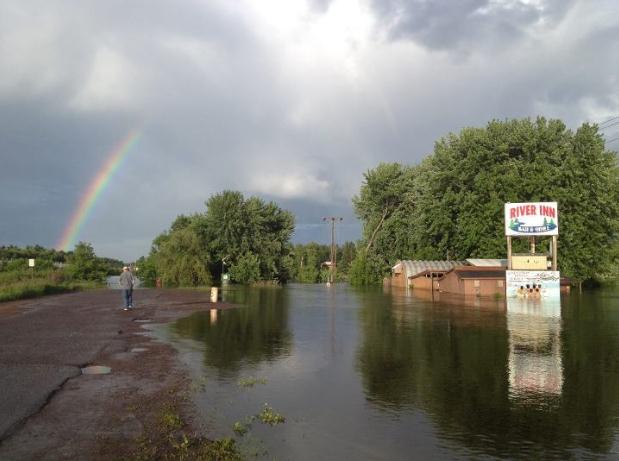 “After The Flood”. Thanks to KARE-11’s Boyd Huppert, who captured this shot near Scanlon – pic courtesy of KARE and Facebook 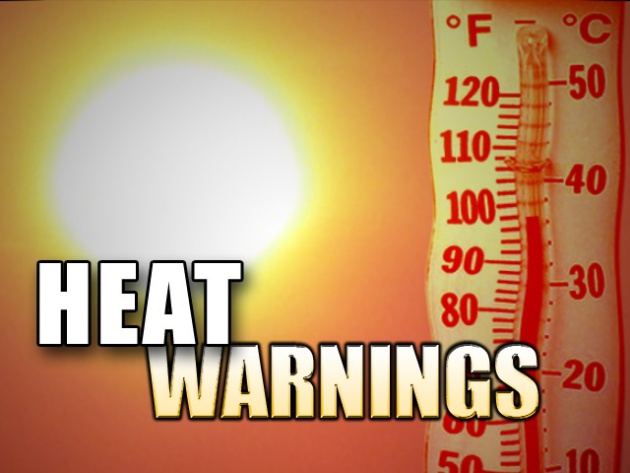 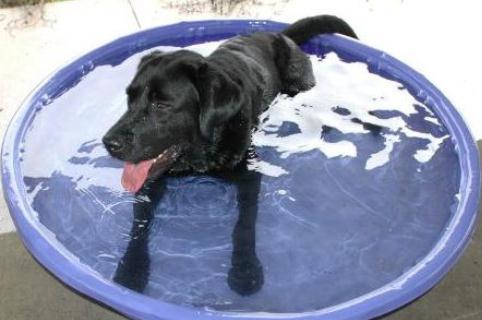 Dog Days Of June. FEMA has some timely  advice for overheated residents of the northeast: “FloJo, a Search & Rescue dog, is staying cool today – are you? Safety tips for the summer heat:


– Check on those without air conditioning to make sure they’re staying cool.
– Consider spending the warmest part of the day inside.
– Make sure your animals are not suffering from the heat and have plenty of water.
– Protect your face & head by wearing a wide-brimmed hat. 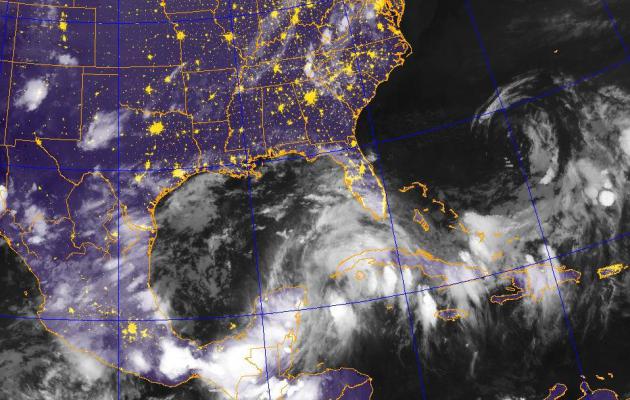 Watching The Gulf of Mexico. The swirl of moisture in the eastern Gulf, centered just west of Cuba, shows signs of further strengthening in the coming days. I have a strong hunch Tropical Storm Debby will form in the Gulf of Mexico within 48 hours, posing the greatest risk to Florida (but all residents living along the Gulf will want to stay alert in the coming days). IR satellite image: NEXSAT, Naval Research Lab. 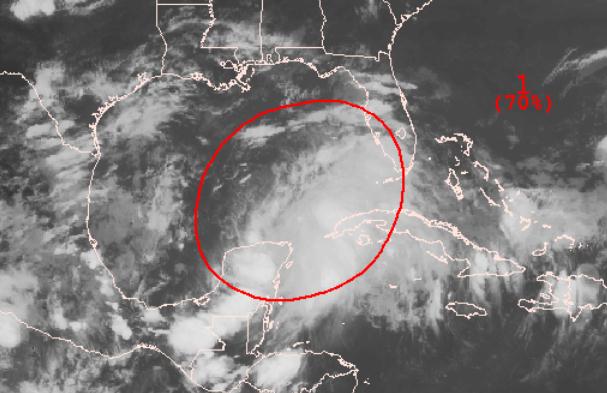 Increasing Odds. 3 days ago the probability of tropical cyclone formation was 10%. Yesterday it rose to 50%. As of late last night the odds of cyclone formation with 48 hours rose to 70%. I think Tropical Storm Debby is going to be a reality by late tonight or early Saturday. More from NHC: 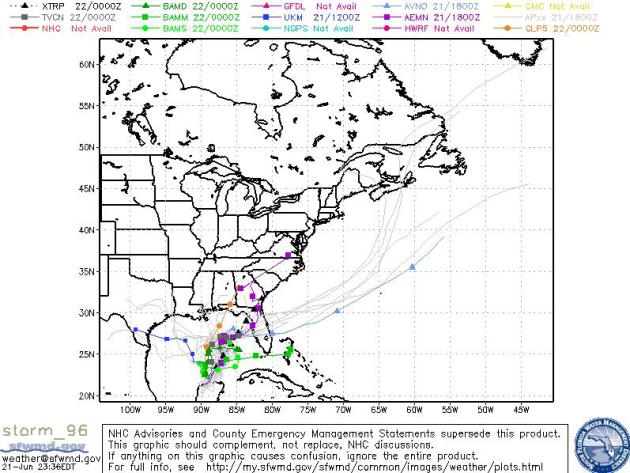 Place Your Bets. Steering winds aloft are unusually light over the Gulf, which favors further strengthening, but makes pinpointing a track even more difficult. Most of the models (above) seem to favor a track over central or northern Florida, but a few models bring Debby (?) into Texas. Stay tuned. Data courtesy of sfwmd.gov.

* going way out on a limb, the ECMWF brings “Debby” ashore near Corpus Christi, Texas next Thursday. That track will almost certainly change and shift in the coming days as new data comes in. Residents of the Gulf should stay alert and consider hurricane preparation plans well in advance. 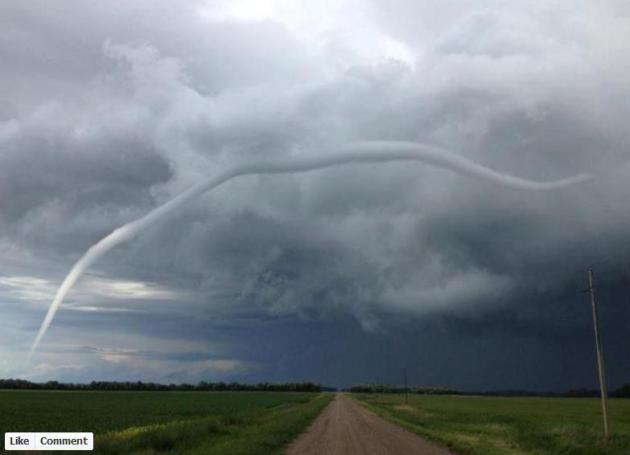 Photo Of The Day: Rope Tornado. I’ve never seen anything quite like this – a skinny “rope” tornado that must stretch 2 miles from the cloud base to the ground. This was shared via the Grand Forks NWS. Thanks to Matt Bahr from Valley News Live for sharing this, via Facebook. 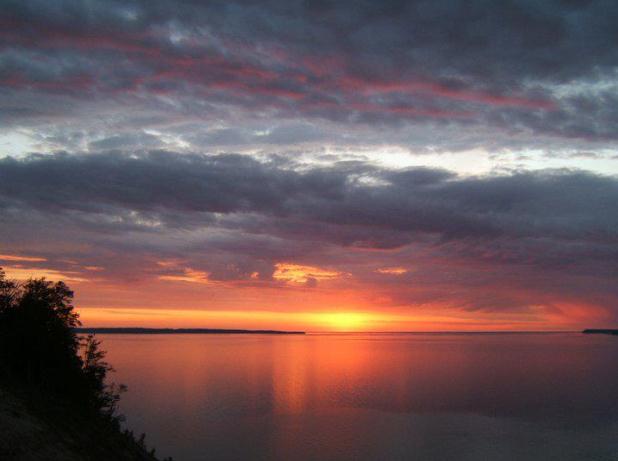 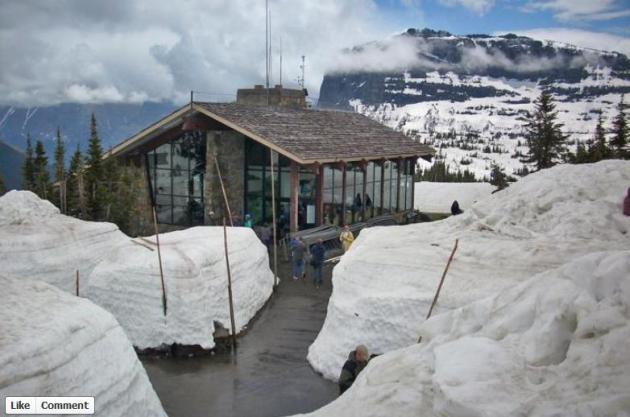 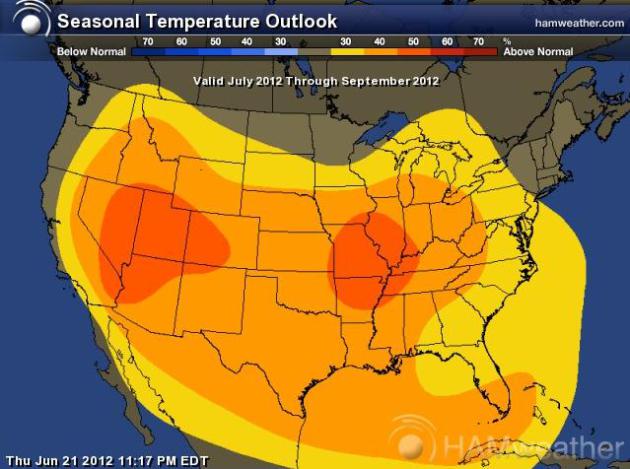 A Long Hot Summer? CPC (NOAA’s Climate Prediction Center) is predicting a hotter than average summer for much of America, the best chance of sizzling heat over the Intermountain Weset and the Middle Mississippi River Valley. Map: Ham Weather. 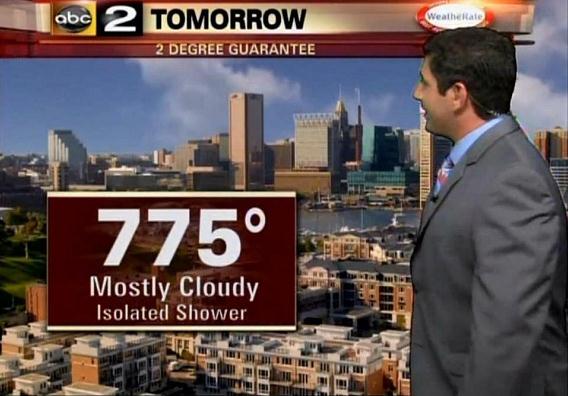 You Might Want To Avoid Baltimore Until Further Notice. I got a chuckle out of this, especially the “2 degree guarantee” part. 775F? Welcome to Venus! TVSpy.com has the details of this unfortunate Chyron goof: “The majority of the country is in the grips of a heat wave right now, but fortunately for Baltimore, it is not as hot there as a graphic on WMAR‘s Sunday newscast (above) predicted it would be. “If you take a look at tomorrow, temperatures will be into the 70s,” meteorologist Mike Masco said. “Not 775 degrees. That’s really a hot day.” [via Baltimore Media Blog]. 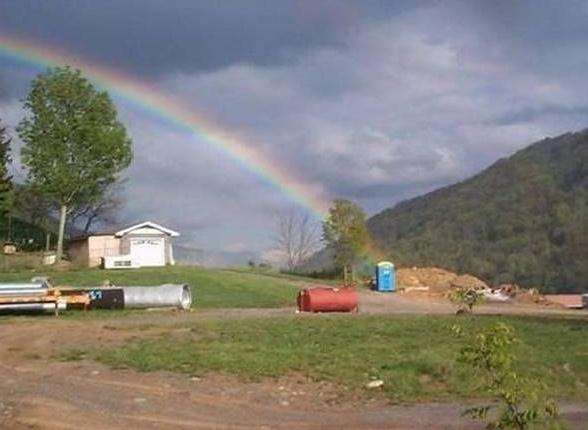 What’s At The End of The Rainbow? An Outhouse. What happened to the pot of gold? It was replaced with a….pot. 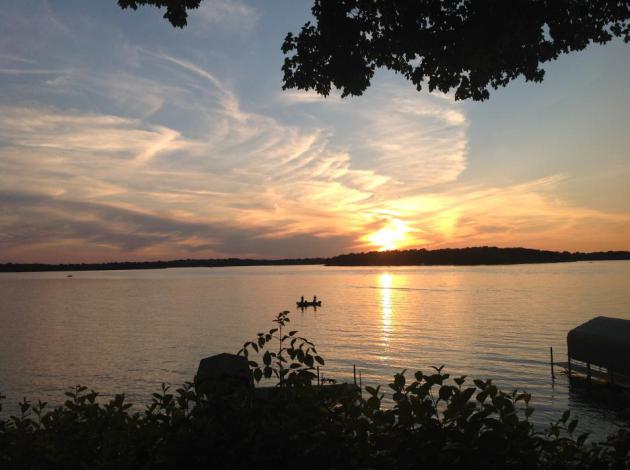