Hot Surge (why is flash flooding on the increase, nationwide?) 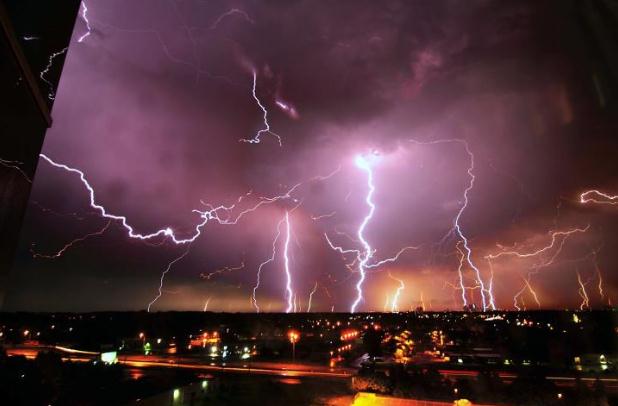 Tropical Downpours
A year ago Duluth was mopping up from 10 inch rains; a 1 in 1,000 year flood for the North Woods.
But according to The Minnesota Climate Office there have been 3 additional 1 in 1,000 year floods over southern Minnesota, just since 2004.
Reinsurance giant Munich Re reports a five-fold increase in thunderstorm losses since 1980. Scientists acknowledge a 4 percent increase in water vapor. It’s basic physics: warm up the air, even slightly, and you increase the capacity of the atmosphere to hold more moisture, more jet-fuel for severe thunderstorms.
The approach of a hot front will leave the atmosphere draped over Minnesota irritable and thundery into Sunday. Not a continuous rain, but numerous showers and heavy T-storms. Models hint at some 2 to 4 inch rainfall amounts by Sunday, and I wouldn’t be surprised to see some flash flooding with a few of these storms.
It should be warm and humid enough to go jump in a lake. Just make sure there’s no rough weather moving in.
If the sun peeks out Saturday & Sunday temperatures may approach 90F, with hotter than average weather spilling over into much of next week. Factor in dew points in the 70s and it may feel like Manila on a good day.
All that trash-talking about cool fronts earlier this month?
Oops.

“…You’re 17,600 times more likely to die from heart disease than from an act of terror, according to the National Safety Council. Still, many of us are more worried about our next flight or even subway trip than we are about the long-term effect of a second or third piece of pie…” – from an article at TPT’s Next Avenue below. 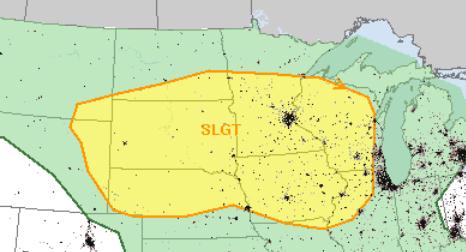 Friday Severe Risk. NOAA SPC shows a slight risk of severe storms from the Dakotas into much of Minnesota, Wisconsin and Iowa, swarms of storms rippling along a volatile warm front. More like a hot front.

Hot Prod. The profile in the vicinity of warm fronts favors thunderstorm development at night, slowly weakening during the morning hours. The atmosphere should be “capped”, too hot and dry aloft for storms south of the warm frontal boundary, but storms linger from the Dakotas into the Upper Midwest and Great Lakes. NAM loop: NOAA.

The Duluth Mega-Flood of 2012. Yesterday marked the one year anniversary of the remarkably destructive flash flood that struck the Duluth area from June 19-20, 2012. The Duluth office of the National Weather Service has a very good summary; here’s an excerpt: “…A swath of impressive rainfall amounts ranging from 5-10 inches fell over much of the NWS Duluth area of responsibility during the period of June 19th – 20th. Numerous roads were washed out from the deluge of rain from Carlton County through the Duluth metro area and into Douglas County and Bayfield County in Wisconsin. A state of emergency was declared in Duluth, Hermantown, Cloquet, Barnum, Moose Lake and Superior, WI. The steep terrain, and numerous creeks and rivers, played a significant role in the devastating damage and flooding that occurred in the Duluth community. The Fond Du Lac and West Spirit Mountain neighborhoods of Duluth and Thomson Township in Carlton County were evacuated. A raging Kingsbury Creek flooded the Lake Superior Zoo, drowning over a dozen animals. Two seals were swept from their enclosures, but were returned safely after being found on a local street. The polar bear escaped its exhibit, but was safely returned after being tranquilized by a dart...” 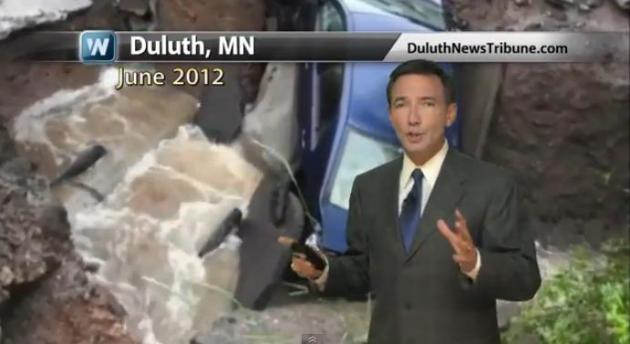 Historic Floods On The Increase. Increasingly, when it rains, it pours…and floods. North Dakota, Minnesota, Wisconsin, Illinois and Michigan each had a top 10 wet spring season in 2013. Iowa had its wettest spring on record with 17.61 inches of precipitation. Meteorologist Paul Douglas looks at what may be fueling the heavy downpours in today’s edition of Climate Matters. Duluth 2012 Flooding video provided by the Duluth News Tribune. Click here for more of their coverage: http://www.duluthnewstribune.com/even… 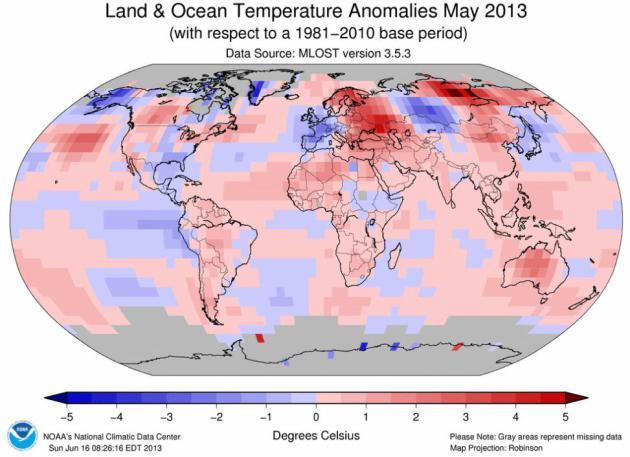 May: Third Warmest On Record, Worldwide. Here’s an excerpt of a comprehensive global summary of May, which was chilly over Minnesota and parts of Europe. The rest of the planet? Not so much. Details from NOAA NCDC: 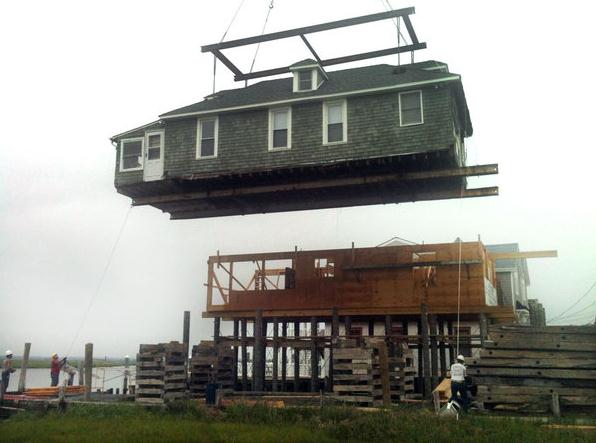 Feds Don’t Do Enough To Prepare For Severe Weather, Report Says. When are we going to stop playing defense and go on offense? But that requires fixing and strengthening our infrastructure, which requires money and vision from Washington D.C., which requires Congress to actually do something. So I’m not holding my breath. The Los Angeles Times has the article; here’s an excerpt: “Federal efforts to bolster community preparedness for extreme weather events are a fraction of what the government spends on cleaning up the damage from storms, tornadoes and drought, according to a new analysis of federal data by the Center for American Progress, a left-leaning Washington think tank. The report estimated that from 2011 to 2013, the federal government spent about $136 billion on weather-related disaster relief and recovery but only $22.4 billion on a total of 43 preparedness programs, or about $6 in cleanup for every $1 spent on strengthening defenses or preventing or mitigating damage. A growing body of climate science indicates that the warming atmosphere increases the likelihood of extreme weather-related events…” 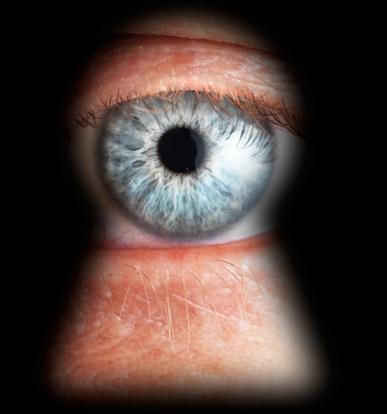 We Are Shocked, Shocked. With the recent outcry over NSA overstepping it’s bounds by monitoring electronic communications I found this post from David Simon interesting, and pretty much on the money. Here’s an excerpt: “Is it just me or does the entire news media — as well as all the agitators and self-righteous bloviators on both sides of the aisle — not understand even the rudiments of electronic intercepts and the manner in which law enforcement actually uses such intercepts? It would seem so. Because the national eruption over the rather inevitable and understandable collection of all raw data involving telephonic and internet traffic by Americans would suggest that much of our political commentariat, many of our news gatherers and a lot of average folk are entirely without a clue. You would think that the government was listening in to the secrets of 200 million Americans from the reaction and the hyperbole being tossed about. And you would think that rather than a legal court order which is an inevitable consequence of legislation that we drafted and passed, something illegal had been discovered to the government’s shame. Nope. Nothing of the kind…” 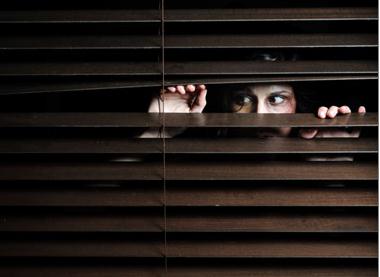 Feeling Paranoid? Here Are 3 Things Actually Worth Worrying About. Yes, we tend to worry about the wrong things much of the time. Instead of fixating on terrorism or agonizing over interest rates we should be far more concerned about the risks caused by a). falling down, b). our diets, and c). infidelity (not necessarily in that order). Here’s an excerpt from a very interesting story at TPT’s Next Avenue: “…Too many Americans, on the other hand, “obsess about the wrong things and we fail to watch for real dangers,” Diamond wrote. We exaggerate the risk of disasters beyond our control while underestimating risks we frequently encounter, like showers, night driving or climbing ladders. It’s no wonder. Terror gets exhaustive media coverage 24/7, even though as we age into midlife and beyond, we face increasing odds of confronting more commonplace adversities. Perhaps it’s time to direct some constructive paranoia in new directions…”

8 Foods We Eat In The U.S. That Are Banned In Other Countries. This article at buzzfeed.com made me do a triple-take, and examine the brightly colored foods on my desk. Yuck. Here’s a snippet that may make you go vegan:

Why it’s dangerous: Artificial dyes are made from chemicals derived from PETROLEUM, which is also used to make gasoline, diesel fuel, asphalt, and TAR! Artificial dyes have been linked to brain cancer, nerve-cell deterioration, and hyperactivity, just to name a few.
Where it’s banned: Norway, Finland, Austria, France, and the United Kingdom.
For more information on artificial dyes, visit 100 Days of Real Food.

12:04 AM. Official start to summer in the Central time zone as the sun’s direct rays fell on the Tropic of Cancer, as far north as they ever reach. Today is, in theory, the best day of the year to get a painful sunburn. 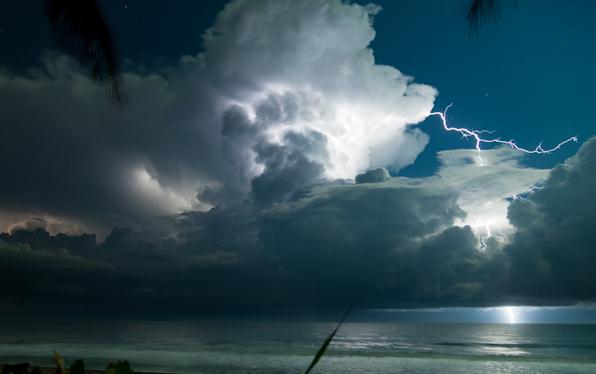 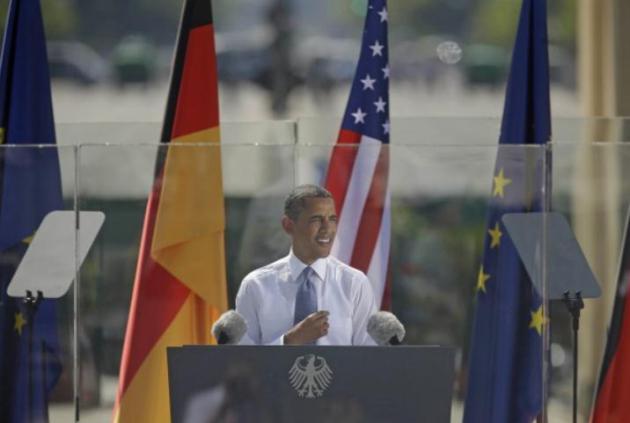 Obama To Tap Executive Powers To Curb Emissions Blamed For Global Warming. Here’s the intro to a story from AP and The Washington Post: “President Barack Obama is planning a major push using executive powers to tackle the pollution blamed for global warming in an effort to make good on promises he made at the start of his second term. “We know we have to do more — and we will do more,” Obama said Wednesday in Berlin. Obama’s senior energy and climate adviser, Heather Zichal, said the plan would boost energy efficiency of appliances and buildings, expand renewable energy and use the Environmental Protection Agency’s authority under the Clean Air Act to regulate heat-trapping pollution from coal-fired power plants…”

Photo credit above: Pablo Martinez Monsivais/Associated Press. “President Barack Obama speaks in front of the iconic Brandenburg Gate in Berlin Germany, Wednesday, June 19, 2013. Obama is planning a major push using executive powers to tackle the pollution blamed for global warming in an effort to make good on promises he made at the start of his second term. “We know we have to do more — and we will do more,” Obama said in Berlin.” 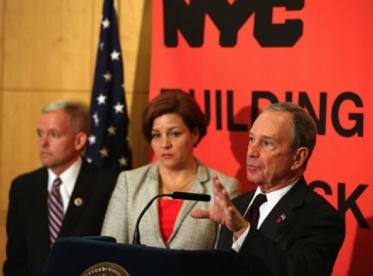 Campaign For Climate Resilience Spreads Across U.S. Meteorologist Andrew Freedman has the story at Climate Central; here’s the introduction: “In the wake of New York Mayor Michael Bloomberg’s announcement of a $19.5 billion plan to make the Big Apple better prepared for future extreme weather events on the scale of Hurricane Sandy, dozens of other cities and counties in the U.S. are showing increased interest in pursuing so-called “climate resilience” plans. On Tuesday, 45 local elected officials from cities A (Ann Arbor) to W (Washington, D.C.) signed on to a new campaign called Resilient Communities for America to share information and take actions that would bolster their communities against the multifaceted challenges posed by global climate change, including more frequent and severe extreme weather events and, in coastal cities, sea level rise…”