Impacts of Vertical Wind Shear on Surface Winds in Hurricanes

Wind direction and speed at all levels of the atmosphere can have a significant impact on tropical systems, affecting intensity, motion and development.  Vertical wind shear is the difference in wind direction between low and high levels in the atmosphere. The affects of wind shear around a tropical cyclone and how it can influence the shape of the surface wind field has been studied by the NOAA Hurricane Research Division and the University of Miami. Results were recently published in the Monthly Weather Review from the American Meteorological Society.

Scatterometers are instruments on aircraft or satellites that are used to measure wind speed and direction at the ocean surface. In this follow-up to a 2016 study, the surface wind in tropical cyclones around the world are studied using a large set of measurements from 2000 to 2011.

Important Conclusions:
1. The shapes of the surface wind fields for all storms outside the radius of maximum wind speed (RMW) are changed by wind shear.

2. The shapes of the surface wind fields in hurricanes, especially the strong ones, are less impacted by shear near the RMW. 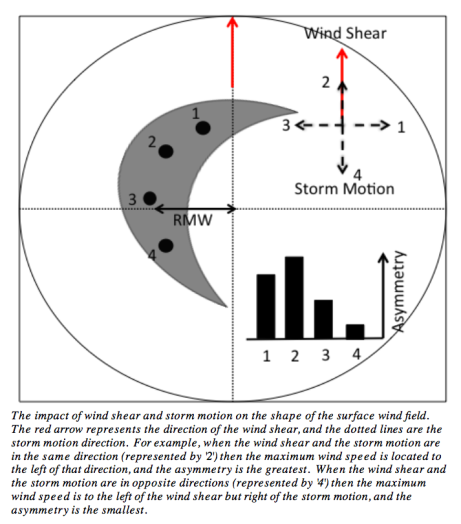 4. There is a well-known asymmetry in the rainfall in tropical cyclones due to shear. This new work shows that the most flow of air into the tropical cyclone near the surface is where rainfall is also greatest. This wind is usually fastest where the rainfall occurs, leading to larger surface- wind asymmetries than would otherwise occur.