Largest Wildfire in NM History and Preparing for Hurricane Season 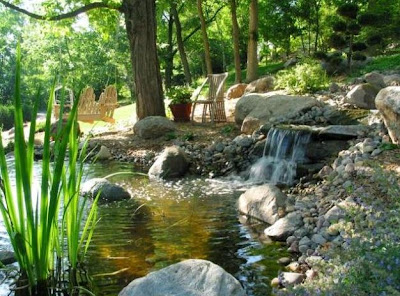 Wet Weather Gardening Tips. Master Gardener Tricia Frostad has some good advice in light of the recent (torrential) rains in May, well over 9″ of rain in many gardens across the metro: “All this moisture can lead to fungal diseases on plants. Fungus overwinters in infected plant residue and excessive overhead watering (as in rain) can activate the fungus. The fungal spores are spread by splashing water and wind to nearby plants and it thrives in damp weather. Spots typically appear on leaves at the base of the plant and move upward as the infection progresses. Remove any plant material that is affected but be certain to never remove more than 1/3rd of a plant’s leaves. Dispose of these diseased leaves in the trash or burn them. Do not return them to the compost pile. Try to make sure that your plants have proper air circulation around the foliage, which may mean pulling “volunteer” plants. Avoid wetting the leaves when watering – it’s much better to water at the base of the plant. Fungicides can help in controlling the spread, but will not “cure” the leaves that have already been affected.” 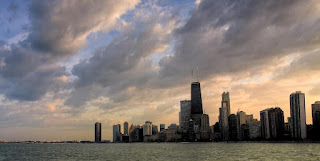 Warmest Spring In Chicago In 142 Years. Here’s an excerpt of a story from WGN’s chicagoweathercenter.com: “The weather as meteorological spring 2012 draws to a close couldn’t be less representative of the season as a whole. Abnormal warmth has characterized the past three months. Spring 2012 is to go down in the record books as Chicago’s warmest in 142 years running a stunning 9-degrees above normal! The last spring with temperatures even close to the one about the end occurred 35 years ago in 1977 when temperatures finished within a degree of this one.” 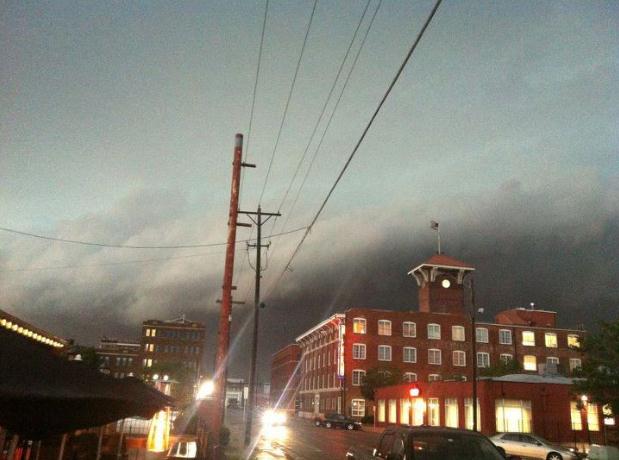 An Ugly Sky. Check out the photo of the oncoming shelf cloud that struck Wichita, Kansas on Wednesday, courtesy of the NWS. Details: “Severe storm approaching downtown Wichita. Picture taken by Alex Laugeman.“ 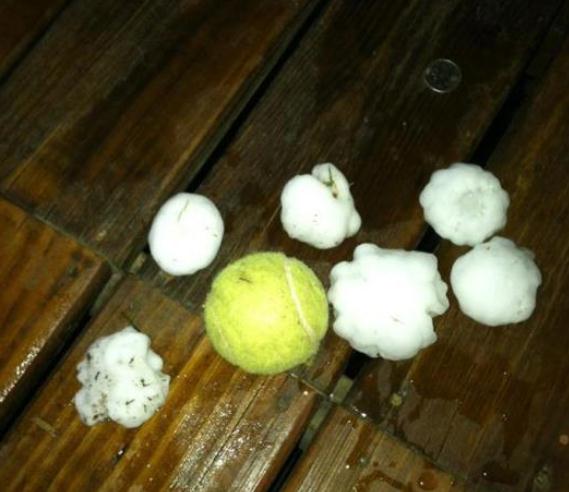 Tennis-Ball Size Hail. This could put a serious ding in your day; details from the Wichita office of The National Weather Service via Facebook: “Hail that fell over North Hutchinson. Picture taken by Deanna Fehrenbacher and courtesy KAKE-TV.“ 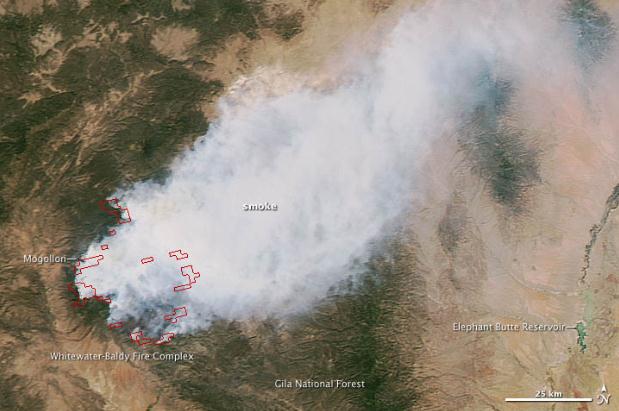 Largest Wildfire In New Mexico History. Here’s an update from NASA’s Earth Observatory: “According to figures released by the U.S. Forest Service, the Whitewater-Baldy fire had burned 170,272 acres (266 square miles), surpassing a fire that burned 156,293 acres (244 square miles) near Los Alamos in 2011. The Moderate Resolution Imaging Spectroradiometer (MODIS) sensor on NASA’s Aqua satellite captured this view of the fire around 4:00 p.m. local time (20:00 Universal Time) on May 29, 2012.” Details from InciWeb.org below: 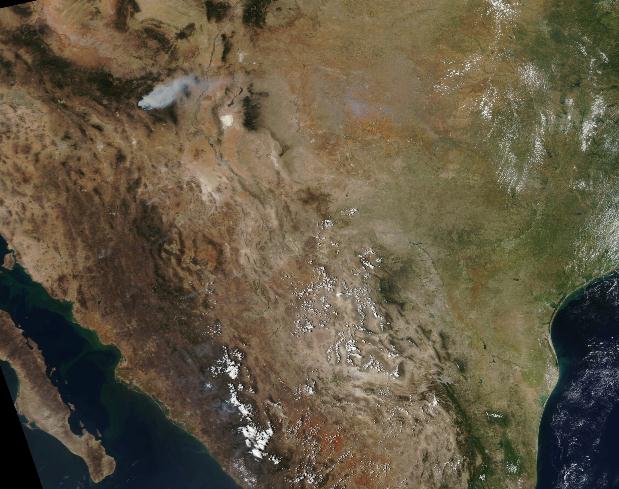 New Mexico Fire From Space. Here’s a striking image from NASA that shows the scale of the wildfire burning in a relatively desolate region of New Mexico. 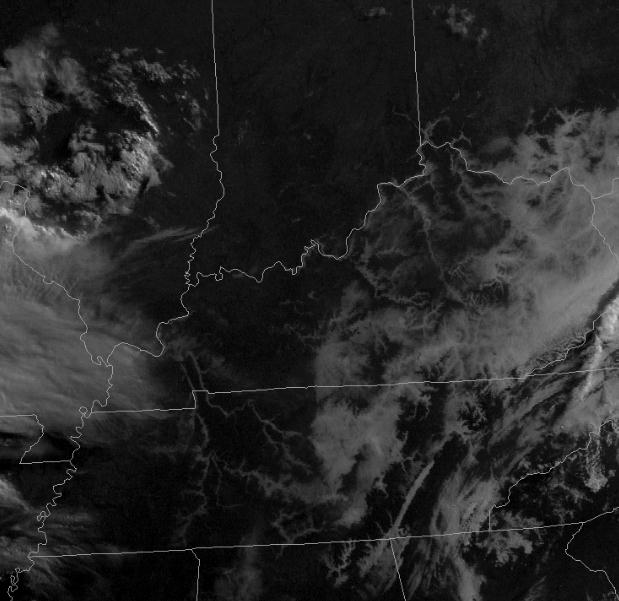 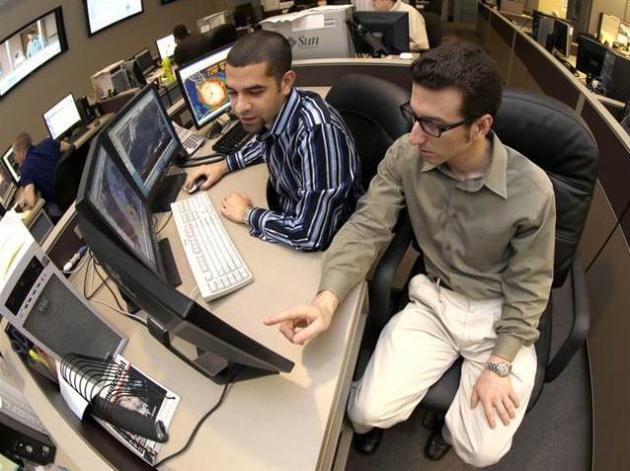 Children Of Andrew Still Recall 1992 Hurricane. Talk about a traumatic event, for both adults and kids alike. Here’s an illuminating story from USA Today: “Some of the most poignant images of the aftermath were those of children: Standing in food lines, idling in sweltering heat beside damaged homes, limp in the arms of rescue workers. Once back at school, some kids hid under desks, apprehensive whenever thunderstorms approached. Others spoke of nightmares that another hurricane would strike. “Disaster really exposes all our childhood beliefs,” said Jon Shaw, a psychiatrist at the University of Miami who studied children in the aftermath of the storm. “To discover that people are unable to provide for you, protect you, is an increased understanding of how the world works.”

Photo credit above:  David J. Phillip  /  AP and MSNBC.com. “Andrew Hagen, left, and Dante Diaz both lived through Hurricane Andrew — and both now are forecasters at at ImpactWeather in Houston.“ 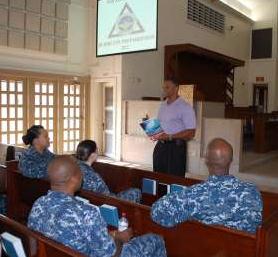 Preparation Key For Hurricane Season. Here’s some helpful, timely advice from jacksonville.com: “Edmond also stressed the importance of having a family plan in place and each member of the family understands it. This includes have a specific meeting place in case you are separated – one near the home and one outside the neighborhood if you can’t return home. And, have an out-of-state contact – someone everyone in the family knows and knows how to contact. Families should also have an evacuation plan and know what to take and where to go. A plan should also be made for family pets. If you plan to ride the storm out at home, make sure you have a disaster survival kit. “The key to hurricane season is being prepared. It doesn’t take long to check your supplies and replenish what you need. And, there is nothing I can stress more than to check your insurance policy. It’s better to make changes ahead of time, than find out after a disaster that you didn’t have enough coverage,” concluded Edmond.”

Stay On Top Of Hurricane Season With Apps, E-mail And Web. Here are some good resources from The Miami Herald: “This hurricane season a flurry of tweets and a hailstorm of social media information are in the forecast. The agencies that provide storm-related information on this, the 20th anniversary season of Hurricane Andrew, will tap technology in the way the masses seems most active these days: online and pushing apps on their phone. “We have a Twitter account, Facebook posts, YouTube, a blog and also a new Power Tracker system for customers to monitor, in real time, power outages and restoration efforts,” said Neil Nissan, spokesman for Florida Power & Light. The Power Tracker allows users to type in their address on a mobile device, tablet or computer and find directions quickly.” 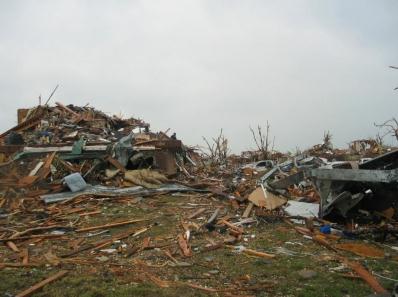 Homes Can Be Protected From Tornadoes. There is no such thing as a truly “tornado-proof” home, unless you’re building a bunker that is mostly underground, or use concrete and steel reinforcement. But there are steps you can take to reinforce an existing home to make it more tornado-resistant; as reported in this article from UPI: “The International Code Council/National Storm Shelter Association Standard for the Design and Construction of Storm Shelters is a tool to help communities protect their residents from disasters and consolidates previous references published by National Storm Shelter Association, the Federal Emergency Management Agency and the Red Cross,” Rick Weiland chief executive officer of the International Code Council said in a statement. “A properly built, high-wind, safe room can protect from the most intense tornadoes, hurricanes and similar natural disasters. Safe rooms can be designed to withstand winds up to 250 mph, offering safe refuge for families in the path of high-wind events.” A closet, bathroom, laundry area or storage room can be enhanced to serve as a safe room, Weiland said.“

Missouri: Soldier’s Looted After Tornado. This one made me do a double-take; here’s an excerpt from The New York Times: “Four Missouri National Guard soldiers stole electronics from a Walmart in Joplin while helping with recovery efforts the day after the store was destroyed by a tornado last year, according to records released Tuesday.” Photo: NOAA.