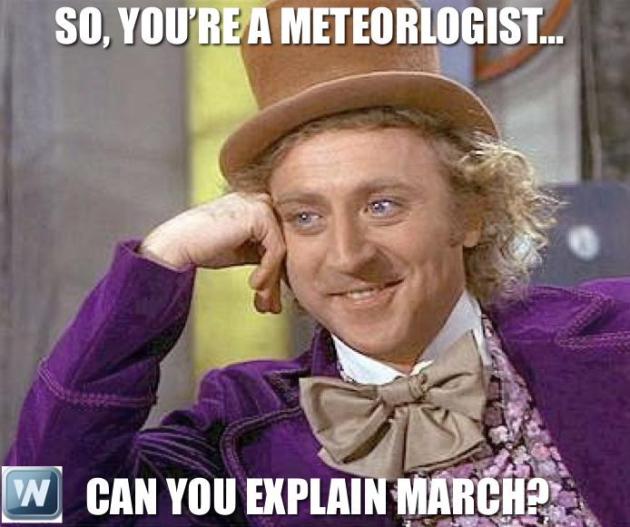 Typo Alert. Yes, I know meteorologist is spelled wrong. I still thought it was funny. And no, I can’t explain March.

Armchair Meteorologist
This is going to sound like blatant kissing-up, but it’s the truth: I have never lived in a place where the locals know so much about the weather. Yes, some days it’s a matter of pure survival. It would be hard to find a Minnesotan who doesn’t know a thing or two about Doppler, wall clouds or dew point.
Meteorologists look for cues: Pacific water temperatures and blocking patterns aloft, when trying to peer out beyond a few days. My prediction of a cool first half of March is based on a negative phase of the NAO, the North Atlantic Oscillation. More dips & bulges in the jet stream create a non-stop runway for Canadian air to reach the USA; a steady diet of cold fronts, which in turn, can spin up more storms.
March 2012 saw a freakishly positive phase of the NAO; screaming west winds from the Pacific keeping cold air bottled up to our north. The result: the warmest March on record. This looks like a more typical March: slush, slop & mud.
A Monday clipper may drop light snow on MSP; long-range guidance hints at 40+ by late next week. Grilling weather.
An average March (ha!) brings 10.3 inches of slushy snow. Get out and play in our 6″ snow; rain is possible late next week. 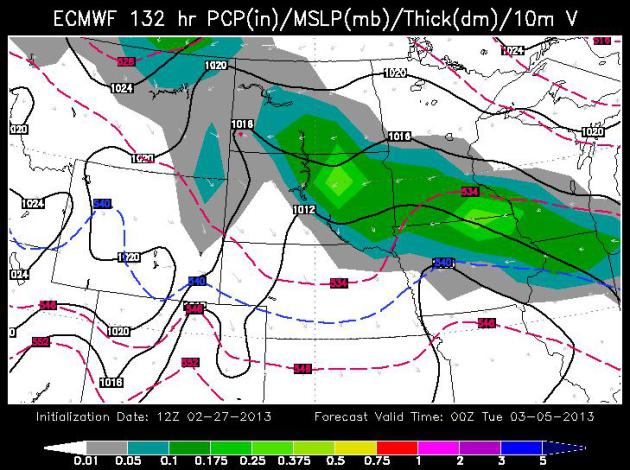 Monday Clipper. These fast-moving storms that approach from the northwest, from the general direction of Alberta, Canada, are exceedingly fickle, putting down a relatively narrow stripe of snow. The latest European run (courtesy of WSI) shows the best chance of a couple inches south/west of the Twin Cities. 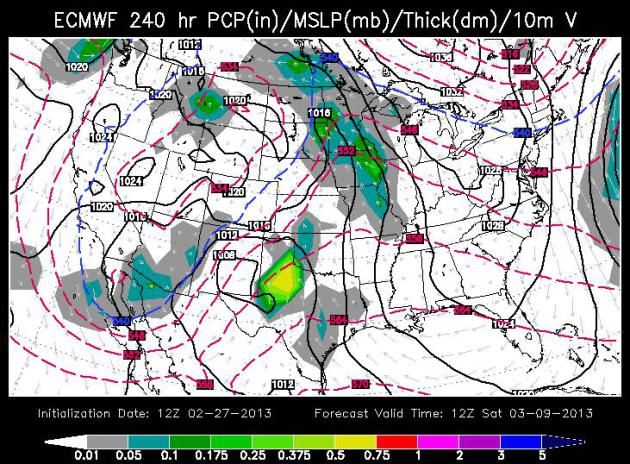 Warming Trend Late Next Week. The ECMWF is hinting at a surge of southern moisture by next Friday, temperatures aloft probably warm enough for rain or drizzle. I wouldn’t be surprised to see highs topping 40 by next Friday and Saturday, then colder weather for the second week of March. Map: WSI.

March Temperature Outlook. NOAA’s CPC (Climate Prediction Center) is forecasting a slight cool bias from Montana into the Dakotas and Minnesota – which jives with the long-range temperature data I’m seeing. Keep the heavy jackets handy – spring is most definitely not right around the corner. Map: Ham Weather. 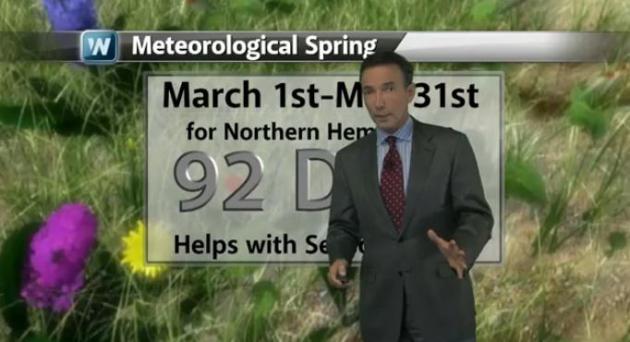 Tomorrow: March 1 (Start of “Meteorological Spring”) As far as the atmosphere is concerned today is the last day of winter. Data shows that, historically, the 90 coldest days run from roughly December 1 to March 1, nationwide. That’s not to say we won’t see more cold fronts and more (slushy) snowfalls in March, but the coldest days are definitely behind us now. Here’s today’s 2:30 segment on YouTube. 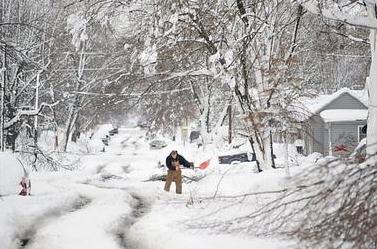 Blizzard Buries Kansas Snowfall Records. Here’s a good summary of the recent parade of blizzards across the Central Plains from The Christian Science Monitor: “The blizzard that pounded the southern Plains states yesterday (Feb. 25) added to the dumping the area received just days ago and has broken the all-time monthly snowfall record for Wichita, Kan. Yesterday’s storm dropped nearly 7 inches (17.8 centimeters) of snow on that city, bringing the monthly total to 21 inches (53 cm) — the most snow the city has seen in any month since records have been kept, according to the National Weather Service. The snowfall also broke the city’s record for February of 20.5 inches (52 cm), set in 1913…”

Photo credit above: “Wes Anderson clears the driveway in front of his grandparent’s house, Feb. 26 in Sedalia, Mo. The second major snowstorm in a week battered the nation’s midsection Tuesday, dropping a half-foot or more of snow across Missouri and Kansas with drifts more than 2 feet high.” Sydney Brink / Sedalia Democrat / AP 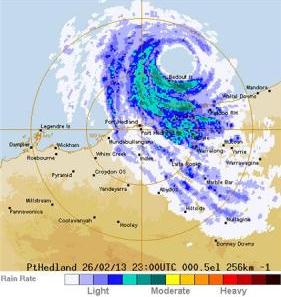 Cyclone Intensifies, Australia’s Iron Ore Mines Brace. Here comes “Rusty” (great name for a hurricane if you ask me), pushing into northwestern Australia. Reuters has the story; here’s an excerpt: “A powerful cyclone headed for Australia’s Port Hedland, that has brought half the world’s seaborne-traded iron ore to a halt, has intensified and is set to make landfall late on Wednesday, threatening to flood inland mine operations and rail links. Weather warnings extend as far as 500 kms (310 miles) inland to the massive mining camps and towns of Tom Price, Mt Newman and Nullagine, operated by Rio Tinto, BHP Billiton and Fortescue Metals Group. Hardest-hit areas could receive up to 600 millimeters, or 2 feet, of rain in 24 hours, said the Bureau of Meteorology...”

19 People Who Are Having A Way Worse Day Than You. O.K. It’s juvenile, but a friend sent me this link from Buzzfeed, and I can’t remember the last time I laughed so hard. Click the link at your own risk. 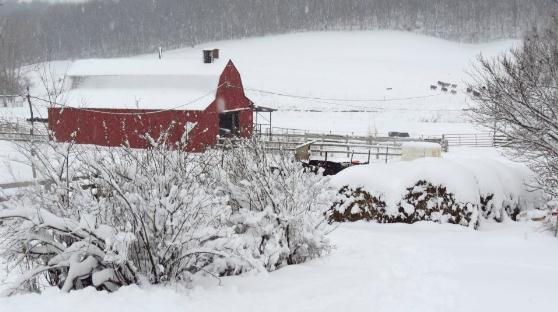 ** photo above courtesy of Marlo Lundy. 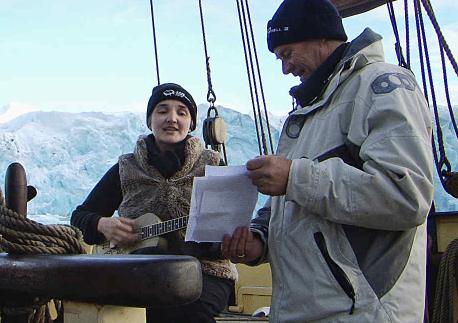 Forecasting Change: A Meteorologist And An Artist On The Climate Crisis. I will be participating in a discussion on climate change at The Walker Art Center this evening with a couple of climate scientists and Cynthia Hopkins, whose play, “This Clement World”,  focused on a rapidly changing climate, garnered rave reviews when it opened in the New York City area. The play is coming to The Walker next week. Here’s an excerpt of a recent interview at The Walker Art Center’s Magazine: “Paul Douglas considers himself an “albino unicorn.” A moderate Republican, he’s also a meteorologist who believes climate change is real. That position was met with scorn by some of the right, who called him a “RINO [Republican In Name Only] climate poser,” a “global warming hoax promoter,” and worse. Theater artist and musician Cynthia Hopkins didn’t need much convincing about the dire consequences we face if we don’t address the climate crisis, but two events were pivotal in pushing her to take up the subject in her art—a talk on sustainability at the 2009 Tipping Point conference and a residency with Cape Farewell, a program that aims to “instigate a cultural response to climate change.” In 2010, she joined Cape Farewell’s Arctic Expedition, in which artists and marine scientists experienced the very environment most threatened by global warming. While their career paths are sharply divergent, Douglas and Hopkins share twin tools when addressing climate change—science and spirituality.…” 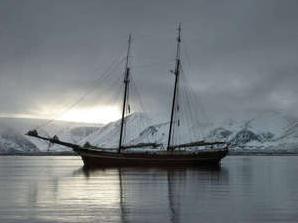 Paul Douglas On Climate Change: “The Longer We Delay, The Harder It’s Going To Be To Come Up With Viable Solutions. More details on “This Clement World”, the acclaimed play focusing on climate change that’s coming to The Walker Art Center next week, in this interview in City Pages: “(Today), meteorologist Paul Douglas will moderate a discussion with artist Cynthia Hopkins, whose climate change themed show, This Clement World, comes to the Walker next week. Patrick Hamilton, director of Global Change Initiatives at the Science Museum of Minnesota, and climate scientist Peter Snyder will also be on hand. Douglas, whose launched the 24-hour Weather Nation TV last summer, is a vocal advocate of preventing climate change. We took a moment to chat with Douglas about how artists can help get the message out, and why it’s so important to do so.


How is that you came to be speaking at the Walker Art Center?

I think Cynthia’s show — This Clement World — exemplifies the notion of using art and theater to try to reach people about this issue when some seem to be oblivious to the science. In some cases, the more facts you throw at them, the more they dig in their heels. So I find it fascinating, and, frankly, highly effective that there are other ways to reach people — in this case on a visceral, emotional level through art...” 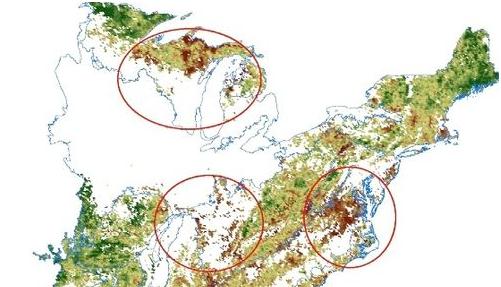 NASA: Climate Change Things Forests In Eastern U.S. You think you’re stressed by recent summers? So are the trees. Here’s a story that caught my eye, an excerpt courtesy of USA Today: “Years of drought and high temperatures are thinning forests in the upper Great Lakes and the eastern United States, NASA satellites show. Nearly 40% of the Mid-Atlantic’s forests lost tree canopy cover, ranging from 10% to 15% between 2000 and 2010, according to a NASA study released this week. Other afflicted areas include southern Appalachia, the southeastern coast and to a lesser extent, the Rocky Mountains and the Sierra Nevada. “There has been a series of summers — growing seasons for trees — that have been deficient in moisture. When you combine that with higher temperatures, it’s stressing the trees,” says author Christopher Potter, a research scientist at NASA’s Ames Research Center in Moffett Field, Calif…”

Graphic credit above: “Drought and heat have caused thinning of forest canopy in the eastern United States from 2000 to 2010, according to a NASA study released in this month. Green areas show increasing tree canopy whereas brown shades show a thinning. Four forest areas negatively affected are circled in red: Great Lakes, Southern Appalachian, Mid-Atlantic, and southeastern Coastal Plain.” (Photo: NASA) 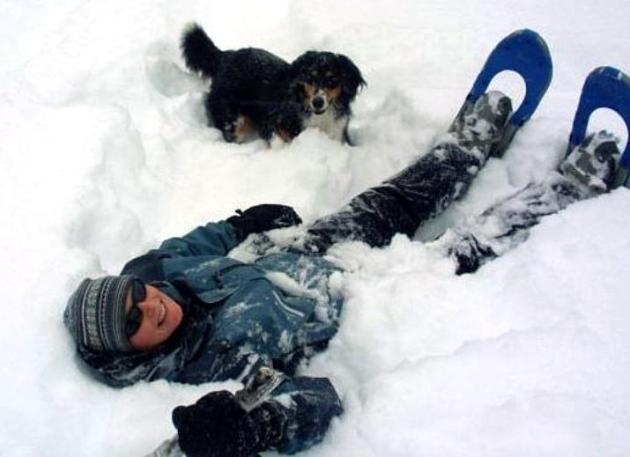 How Climate Change Affects Your Winter Sports. Here’s an excerpt from a story at The PBS News Hour: “Jenny Bushmaker teaches children to love the outdoors at an environment education facility in Silver Bay, Minn. But with less and less snow each winter, her work is becoming more difficult. “Without snow in the winter, [I] have a hard time teaching snowshoeing, Ojibwe winter history, cross country skiing, animal tracking, winter animal adaptations and much more,” Bushmaker said. “I spend more time indoors than I used to and I’m not nearly as active as I normally am.” 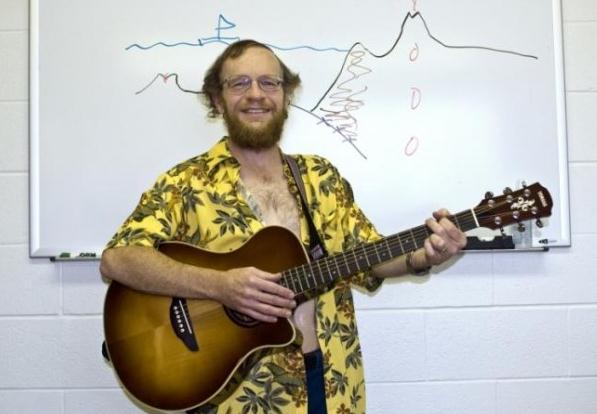 Antarctica’s Exit Glaciers: The Drunk Drivers of Climate Change. Here’s a portion of a fascinating article at arstechnica.com: “Richard Alley’s studies of the role of ice sheets in climate change have earned him various awards, a PBS special, and have made him a repeat performer at the meetings of the American Association for the Advancement of Science. When I first saw him speak a few years ago, he argued that the ice sheets of Antarctica and Greenland play a huge role in controlling sea levels. Mountain glaciers don’t hold nearly as much water, while the thermal expansion of water in the oceans is a slower and more predictable process. The ice sheets, in contrast, have been a big unknown. At the time, we didn’t yet fully understand how much of them might melt, or how quickly they might dump water into the oceans…”

Climate Change In Nebraska Requires Planning For Future Of Agriculture, Experts Say. Here’s a clip of a story at journalstar.com: “…The 2012 drought was an eye opener, said Michael Hayes, director of the National Drought Mitigation Center and a member of the Climate Assessment  Response Committee. The warm and dry weather beat out the dust bowl years of the 1930s. Across the country, economic losses from the drought are estimated between $35 billion and $77 billion. While scientists for the National Oceanic and Atmospheric Administration have said the drought falls within the context of natural climate variability, he said, the heat combined with the dryness in 2012 gives a glimpse of what future climate extremes might look like in Nebraska. And all climate models indicate increased temperature in the future. Hansen said that although Nebraska has always been a state of weather extremes, it seems the volatility is increasing….”