Leonids Peaking and a “Calm” Thanksgiving and Black Friday 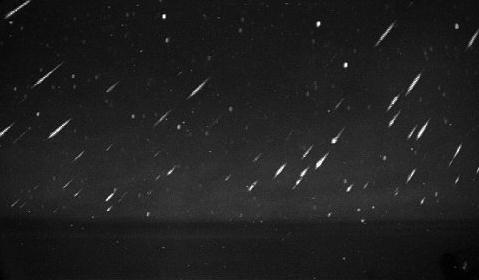 Leonid Meteor Shower Peaking. NASA has more information on the Leonids, which peak late tonight: “This year’s Leonids meteor shower peaks on Nov. 17 at 4:30 AM Eastern Time. If forecasters are correct, the shower should produce a mild but pretty sprinkling during the night of the 16th/morning of the 17th. The moon will be a waxing crescent setting before midnight, clearing the way for some unobstructed Leonid viewing. “We’re predicting a normal year of 15 to 20 meteors per hour” says Bill Cooke of the Meteoroid Environment Office at NASA’s Marshall Space Flight Center. Leonids are bits of debris from Comet Tempel-Tuttle. Every 33 years the comet visits the inner solar system and leaves a stream of dusty debris in its wake. Many of these streams have drifted across the November portion of Earth’s orbit. Whenever our planet hits one, meteors appear to be flying out of the constellation Leo. For best meteor viewing Cooke suggests going to a location away from city lights, dressing warmly, and lie flat on your back and look straight up. No special viewing equipment needed — just your eyes. The Leonids occur each year in mid-November.” 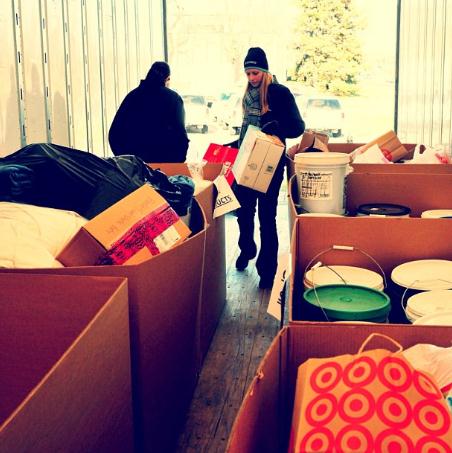 Contributions For Sandy Victims. Kudos to KARE-11 and any and all who contributed to a (big) shipment of supplies, heading from MSP to New Jersey, in the aftermath of Super Storm Sandy, which produced the lowest air pressure ever observed for portions of the northeast on October 29. It will take months, possibly years for coastal towns to return to some sense of normalcy. 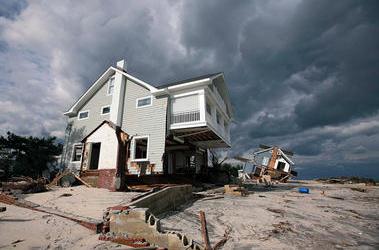 Surging Storms: Can The US Adapt In Time To Avert Coastal Damage. I would hazard a guess that the short answer is an emphatic no. We’re allowing people to build homes in high-risk coastal areas, and rebuild after major storms like Sandy on a consistent basis. Insanity is defined as doing the same thing over and over, expecting different results. Mandatory federal insurance is required for people living close to sea level, and taxpayers indirectly contribute to this ongoing treadmill of rebuilding. It’s the third rail of politics – nobody wants to say it out loud, but too many people are building in areas prone to repeated storm surges from hurricanes and Nor’easters. Private insurance companies won’t touch these policies – and for good reason. Here’s an excerpt of an article at The Christian Science Monitor: “…Indeed, damage from tropical systems such as Sandy are projected to multiply by the end of the century as the population grows and people put more assets in harm’s way. That’s true whether or not global warming, which many researchers say is feeding extreme-weather events, is factored in. Tropical-cyclone damage now runs about $26 billion a year globally, according to a study published in January in the journal Nature Climate Change. By 2100, increases in population and wealth as economies grow could push that number to $56 billion a year, assuming little or no effort to adapt to the hazard...” 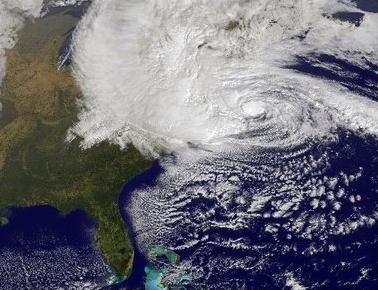 We Survived Hurricane Sandy. Now What? Here’s a clip from a first-person account of Sandy at Huffington Post: “I live on the Texas Gulf Coast. I have lived through a lot of hurricanes and tropical storms. Yet last month, I flew into New York City for a hurricane. Why? Following my recent book launch, I had a lot of important media events, including a potentially game-changing TEDx talk, scheduled starting on October 30. This SQ work is my passion and mission. I didn’t want to miss these events because of cancelled flights. So I left on the second-to-last flight out of Houston to Newark, and arrived at my hotel hoping that Sandy would be more hype than horror. As a storm veteran, I brought a flashlight, extra batteries, boxes of granola bars, and other food with me. I verified that the hotel had a backup generator just in case. I confirmed we were not in the Zone A evacuation area. I stocked up on some bottled water, filled the tub, and hunkered down. Over the next few days, the local news crew became my primary companions…” 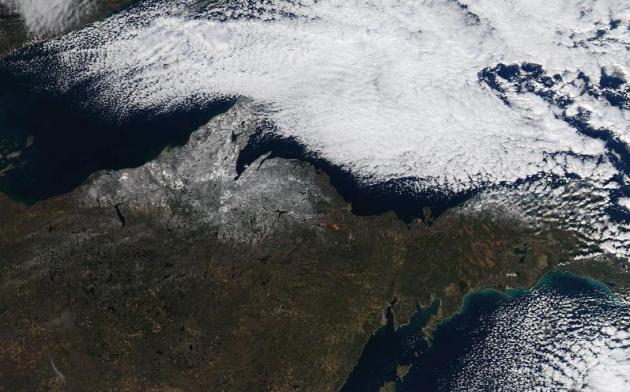 Lake Effect Snow From Space. The high-resolution (“MODIS”) satellite from NASA boasts resolutions as good as 250 meters. Here’s an excerpt from a recent NOAA post describing favorable conditions for lake effect snow bands: “Snowfall reports from Cooperative Observers, Spotters, and Social Media indicated anywhere from 2-6 inches of snow fell over Northwest Upper Michigan as of the morning of 11/13. In addition, locations east of Munising near Lake Superior received up to 3 inches of snow (seen through the clouds from Pictured Rocks National Lakeshore to Newberry). The widespread area of Lake Effect Snow highlights the areas that are favored by West to Northwest winds, as the snow quickly diminished after passing over the Huron Mountains (produced just a light dusting in Marquette). This was due to the combination of downslope wind off the higher terrain and the snow showers being removed from the influence of Lake Superior.  This lack of snow continued to the east of Marquette until the Pictured Rocks National Lakeshore, where the West-Northwest winds allowed a long enough residence time over Lake Superior to produce lake effect snow. To see a listing of snowfall reports from this lake effect snow, click here.” 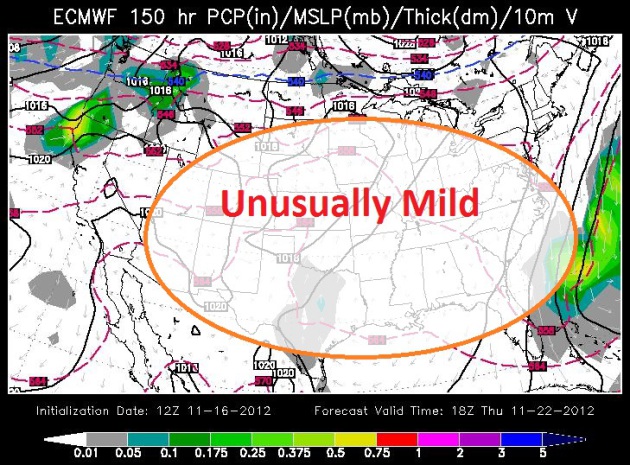 Thanksgiving Preview. ECMWF model data (courtesy of WSI) shows unusually mild, dry weather across most of the USA next Thursday; cold air temporarily locked to the north over Canada. A few showers are possible from northern California to Boise, Idaho – otherwise dry weather should be the rule. Thursday’s weather map looks like something out of early or mid October. Map above: WSI. 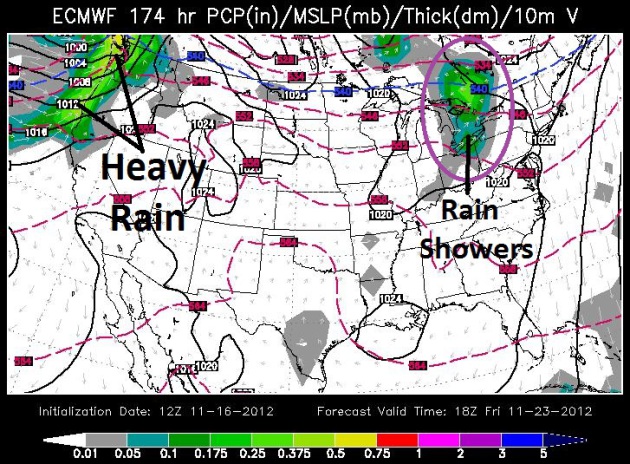 Barlow and Wellstone Create New Mental Health Initiative. I’ve been impressed with KSTP-TV meteorologist Ken Barlow’s courage in coming forward with his bipolar condition – he’s already helped countless Minnesotans and he’s just getting started.  I want to support him any way I can going forward. Here’s an excerpt of a story at TwinCities.com:  “Ken Barlow and David Wellstone are teaming up to create the Wellstone-Barlow Mental Health Initiative. The two met at the National Alliance on Mental Illness walk in September, where Barlow, a KSTP-TV meteorologist, revealed he had bipolar disorder. Wellstone — a passionate advocate for mental health issues — was at the event to speak about mental health parity. “I never met Ken until the NAMI walk where he told his story about bipolar,” said Wellstone, who suffered from post traumatic stress disorder and depression following the plane crash 10 years ago that killed seven people including his father, Sen. Paul Wellstone, mother, Sheila, and sister Marcia. “I worked pretty hard on the mental health parity bill, so I wanted to launch an organization that continued to work to bring collaboration together for policy issues….”

“Indoor Clouds”. Here’s an excerpt of a fascinating post (and experiment) at mashable.com: “Dutch artist Berndnaut Smilde has developed a way to create clouds indoors by carefully regulating the space’s humidity, temperature and light. This intersection of science and art was recently named one of TIME magazine’s “Best Inventions of the Year 2012.” The fluffy white clouds are summoned up temporarily using a fog machine, creating a surreal experience in the middle of a room. Smilde has created his clouds inside different types of locations, ranging from corridors and hallways, to bedrooms and common spaces…” 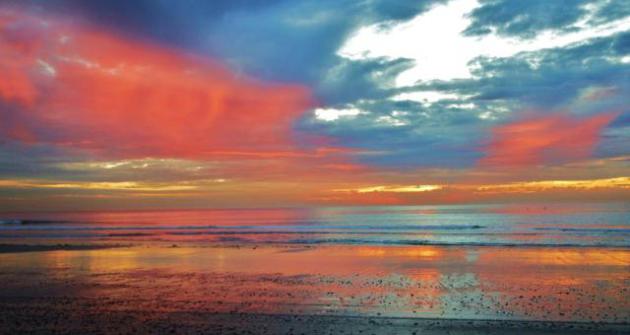 San Diego Dream. What a photo – thanks to Jim Grant and WeatherNation TV for sharing this beach pic from San Diego – the city with the best yearround climate in the USA. Today that wasn’t hard to believe. 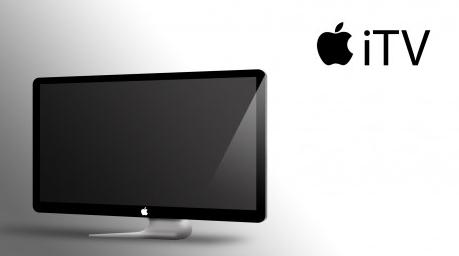 Analyst Predicts Apple TV Set Is “Imminent”. Personally, I’m not so convinced, unless Apple has been able to pull off incredible secrecy and stealth with this long-rumored invention. Gizmag.com has more details: “Apple’s TV set just won’t go away. For a couple of years, its rumored existence has been a favorite subject of analysts and tech blogs. Just as we thought iTV Fever had died down, another analyst has chimed in, predicting that the its release is “imminent.” James Kisner, an investment analyst with Jefferies, thinks the time is now for the Apple television. He says that a cable company is investigating how much extra bandwidth it would need to handle the Apple TV set: “Our discussions with industry contacts suggest that at least one major N. American MSO (Multi system operator) is working to estimate how much additional capacity may be needed for a new Apple device on their broadband data network. We believe this potentially suggests an imminent launch of the Apple TV …”