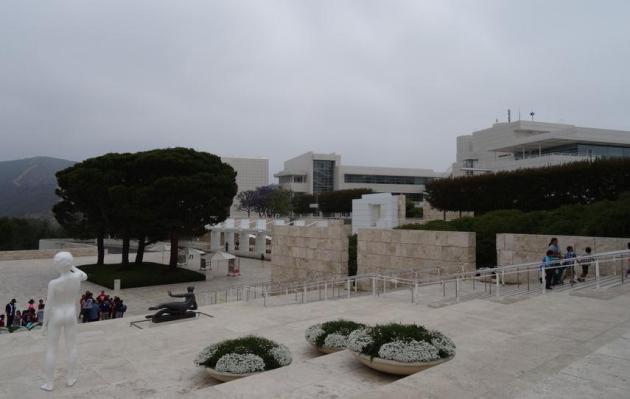 June Gloom
I just got home from Los Angeles, where I gave a talk on extreme weather trends to the Department of Homeland Security. No, I didn’t fly to California to “see the sun” but I did manage to snap a few photos of sunsets and smiling locals.
The timing was ironic, as Tropical Storm Andrea unleashed record rains on New England and some towns in Europe were cleaning up from the worst flooding in 500 years.
A few Santa Monica residents griped about June Gloom, a thin, moist maritime layer sparking early overcast, typical for June. Yes, the big forecast challenge in LA this time of year is “what time will the sun come out?”
Insert yawn here.
We have our own unique flavor of meteorological misery this year: stuck in a cool, wet rut, with storms every other day, it seems. Some are wondering if we’ll have a real summer? I’m still betting on status quo – cooler than average with an occasional heat spike. Nothing like last summer. The jet stream is too far south; the main superhighway for storms howling almost directly overhead.
No sudden drought this summer.
The sun pops out today; a few 80s in the 7-Day. T-storms may sprout by Wednesday, again late Friday into Saturday AM.
Next weekend should be more lake-worthy. Like LA, without the gloom.

* I snapped the photo above from The Getty Museum Saturday morning, when the “June Gloom”, moisture streaming in off the Pacific, kept skies overcast. 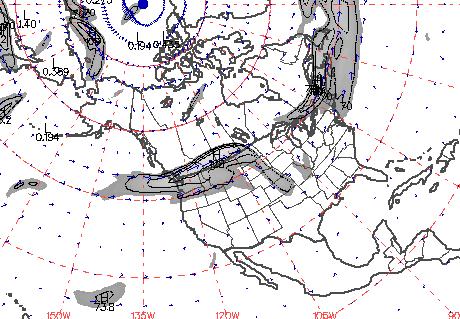 Weather Maps: More Like early May. The core of the jet stream is (consistently) blowing 400-600 miles farther south than normal for this time of year, pulling cooler Canadian air into the northern tier states of the U.S. – setting the stage for a series of sloppy storms from Seattle to the Twin Cities to Boston. I have a hunch this will be the prevailing pattern for much of the summer. Translation: cooler, and much wetter/stormier than normal. 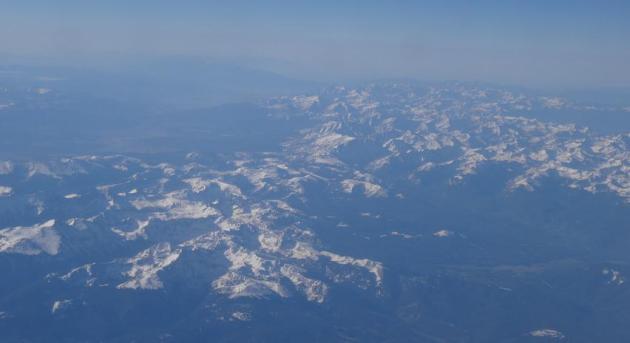 June Skiing. I snapped this photo at 35,000 feet somewhere above central Colorado last Thursday, amazed by the amount of snow still on the ground above 7,000 feet – another symptom of our tenuous spring. April was more like a (severe) March, May was typical for early April. Maybe we’ll finally get June weather after the 4th of July. 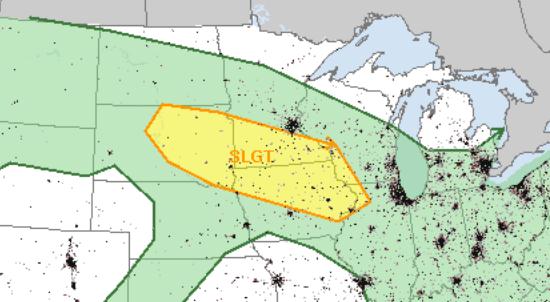 Tuesday Severe Threat. A wave of low pressure rippling along a warm frontal boundary (with dew points well up into the 60s south and west of MSP) may spark a few strong to severe storms tomorrow, especially central South Dakota into southern Minnesota and northern Iowa. Source: NOAA SPC.

Waves Of Showers and T-storms. A surge of heat pushing northward across the Plains will set off more strong to severe storms Tuesday, conditions ripe for locally heavy rain across the Ohio Valley the latter half of the week. 84 hour NAM loop: NOAA NCEP. 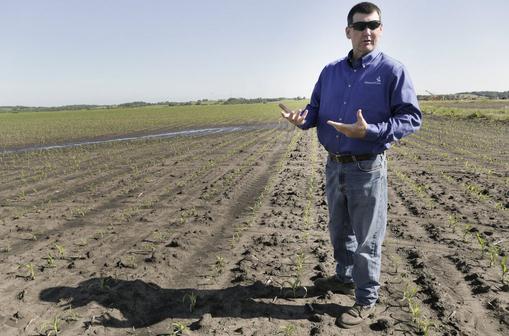 After Drought, Rains Plaguing Midwest Farms. Weather whiplash over the Midwest is making national news. From drought to flood, in the meteorological blink of an eye, and once again many farmers are suffering. Here’s an excerpt from The New York Times: “…One of the worst droughts in this nation’s history, a dry spell that persisted through the early part of this year, has ended with torrential rains this spring that have overwhelmed vast stretches of the country, including much of the farm belt. One result has been flooded acres that have drowned corn and soybean plants, stunted their growth or prevented them from being planted at all. With fields, dusty and dry one moment, muddy and saturated the next, farmers face a familiar fear — that their crops will not make it. “This is the worst spring I can remember in my 30 years farming,” said Rob Korff, who plants 3,500 acres of corn and soybeans here in northwestern Missouri. “Just continuous rain, not having an opportunity to plant. It can still be a decent crop, but as far as a good crop or a great crop, that’s not going to happen…”Photo credit: “Rob Korff, a corn farmer who planed about a month late this year after heavy rains that have made growing difficult, in Norborne, Missouri, June 7, 2013. In many areas of the Midwest, one extreme has given way to another, as flooded pastures have delayed planting or washed away young shoots.” (Steve Hebert/The New York Times) 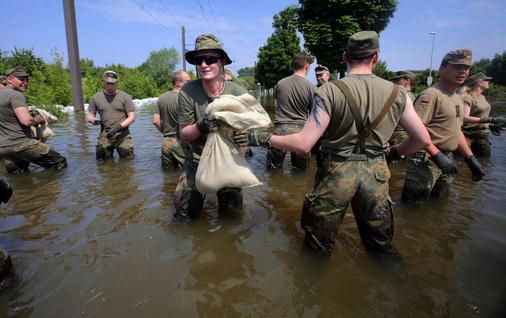 Flood Alert Forces 15,000 Germans To Flee, Threatens Hungary. Here is a clip from AFP & The Australian: “GERMAN authorities have urged 15,000 more people to flee their homes in a city on the swollen Elbe river as central Europe’s worst floods in a decade also threatened Hungary after causing havoc in the Czech Republic and Austria. The river Danube reached a new record high in Budapest but the Hungarian capital’s mayor sought to ease concerns, saying water levels were stabilising, although about 1200 people were evacuated along the river. The deluge has also sparked massive emergency responses in Austria and Slovakia. A torrent of flood waters in Germany has turned vast areas into a brown water world, sparked a mass mobilisation of emergency workers and caused billions of euros in damage in what one MP termed a “national catastrophe“…Photo credit above: “German army soldiers work at a dike in the city of Magdeburg, eastern Germany, Sunday June 9, 2013. Thousands of people have been evacuated from their homes in a region of eastern Germany where the Elbe river has flooded and burst through a dam, officials said Sunday. More than 20 people have been killed by a week of flooding in central Europe, as rivers such as the Danube, the Elbe and the Vlatava have overflowed after heavy rains and caused extensive damage in central and southern Germany, the Czech Republic, Austria, Slovakia and Hungary.” (AP Photo/dpa, Jens Buettner) 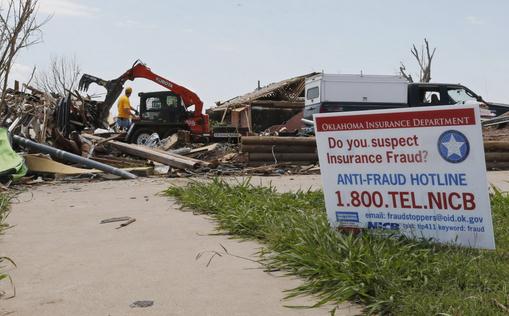 Insight: In Tornado Alley Building Practices Boost Damage. The reality: it all comes down to building codes. Outside of Hurricane Alley (coastal communities from Brownsville to Portland) building codes are more lax; homes only built to withstand 75 mph winds. A home or office could be constructed to be “tornado-proof”, but costs would probably be prohibitive. Could (most) homes be constructed to withstand (most) tornadoes? Probably. If Oklahoma building codes could be raised to the standards of Florida more homes (and homeowners) could survive tornadoes. Here’s an excerpt of an interesting story at The Chicago Tribune: “…This notion that we cannot engineer buildings economically to withstand tornado loads is a fallacy,” said Prevatt, who has studied damage from hurricanes and the devastating tornadoes in 2011 in Joplin, Missouri and Tuscaloosa, Alabama. The cost of damage from tornadoes is soaring in the United States even though National Weather Service historical data shows no significant rise in the number of storms. The last five years have seen the highest losses from thunderstorm damage in U.S. history, according to an analysis by insurer Munich RE…”Photo credit: “A sign warning against insurance fraud is displayed as heavy equipment is put to use removing debris from a home destroyed by the May 20th tornado in the Plaza Towers neighborhood of Moore, Okla., Friday, June 7, 2013.” (AP Photo/Sue Ogrocki) 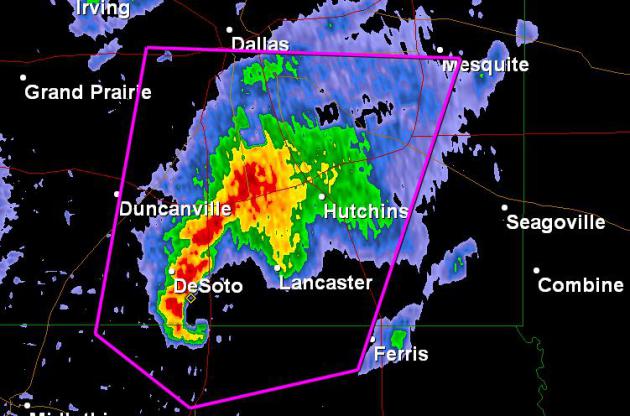 Scientists Hope To Predict Tornadoes By Using Little Drones. I can see every TV station having their own drone. Drone7! Just when you thought it couldn’t get any crazier, check out this story at The Los Angeles Times: “Tornadoes used to strike without any warning. Since the 1970s, meteorologists have worked to bring the average warning time up to 13 minutes. A combination of weather balloons, radar and on-the-ground observations form the core of today’s forecasting technology. Now scientists have a new goal: extending the warning time from minutes to hours by sending unmanned aircraft — drones — into a brewing storm. Pulling that off would require not only technological expertise but also flexibility in government rules that block most such flights. Until now, most of the work on unmanned aircraft has been for military or public safety uses. But researchers are increasingly exploring their use in science, including severe weather research…” 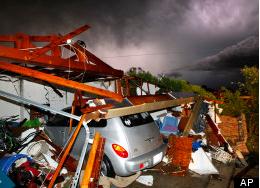 Is Climate Change Increasing Tornado Intensity? The short answer: we’re not sure. A warmer, wetter atmosphere may fuel more severe thunderstorms, but changes in wind shear in a warming world may impact tornadogenesis. Here’s a clip from Huffington Post: “…Global warming is making wet places wetter and dry places drier, and creating moisture-laden air that fuels hurricanes and snowstorms, making them much worse than they otherwise would be in a climate unchanged by human behaviors. [The New Normal: Deluge] But we can’t necessarily say the same about tornadoes, at least not yet. The tornado connection to global warming is tenuous, and for several reasons. Chief among them is the fact that climate change apparently affects the two major factors influencing tornadoes — energy and wind shear — in completely opposite ways…”Photo credit above: AP. “Lightning strikes from a storm illuminate a home damaged by a tornado on Hyde Park Lane at Country Club Rd. in Cleburne, Wednesday night, May 15, 2013.” 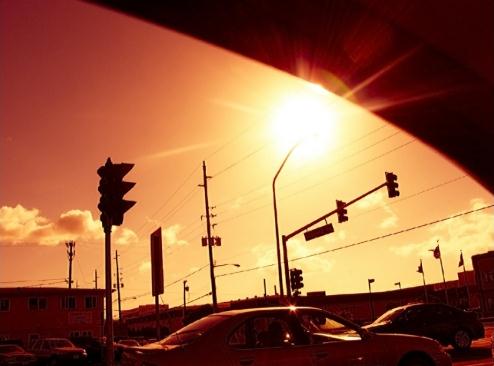 Climate Science Tells Us Alarm Bells Are Ringing. Here’s a portion of an Op-Ed atThe Washington Post: “…projections from an array of scientific analyses summarized by the National Academy of Sciences and most of the world’s major scientific organizations indicate that by the end of this century, people will be experiencing higher temperatures than any known during human civilization — temperatures that our societies, crops and ecosystems are not adapted to. Computer model projections from at least 27 groups at universities and other research institutes in nine countries have proved solid. In many cases, they have been too conservative, underestimating over the past 20 years the amounts of recent sea-level rise and Arctic sea ice melt. Much has been made of a short-term reduction in the rate of atmospheric warming. But “global” warming requires looking at the entire planet. While the increase in atmospheric temperature has slowed, ocean warming rose dramatically after 2000. Excess heat is being trapped in Earth’s climate system, and observations of the Global Climate Observing System and others are increasingly able to locate it. Simplistic interpretations of cherry-picked data hide the realities…” (Image: Climate Central).