A Look at Historic Summer Heat Across The U.S.

Sure it’s hot, but is it record hot? Much of the U.S. is statistically likely to experience their hottest day of the year between mid-July and mid-August. In honor of that sweltering milestone, NOAA has created maps of the hottest summer temperature on record for thousands of U.S. locations.

The map above shows the hottest summer (Jun 21-Sep 22) daytime high temperatures recorded at thousands of U.S. stations. Places where the record-setting daytime high was above 80°F are in shades from yellow to red to black. The few locations (can you find them?) where the hottest daytime high on record was below 80 are colored blue.

Anyone familiar with America’s mountain ranges will understand the cluster of pale yellow dots in northwestern Wyoming and Colorado. It makes sense that the country’s coolest “hottest summer days” would appear in Rocky Mountain territory.

The country’s hottest daytime highs (black dots) are in the Desert Southwest: Arizona, Nevada, and southern California, where elevation and latitude are relatively low and the landscape is arid.

Topography and latitude aren’t the only influences on how hot a location has ever gotten. Otherwise, how would we explain that the hottest temperatures on record for many locations in Florida (our country’s flattest, most southerly state) are cooler than many of those in those of its northerly neighbors?

Daytime high temperatures in Florida are moderated by its location adjacent to two large bodies of water. So we see more gold and orange dots there than we do in Georgia and South Carolina (orange and red dots).

We can see a similar influence at play around the Great Lakes. Locations in North Dakota that are at the same latitude as stations in Michigan’s Upper peninsula have record temps that are much hotter. 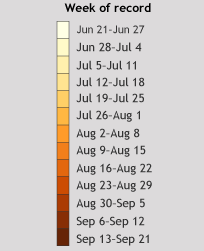 Remember that this map is weather history, not climate, so in some cases the week in which a location experienced its hottest summer day on record is simply going to be due to random chance. Still, even amid the “noise” of weather, a few climate-scale signals emerge.

The timing and reach of the North American Monsoon

The early-late difference is likely due, at least in part, to the North American Monsoon. The monsoon generally gets underway in July, and it brings clouds and thunderstorms to Arizona, New Mexico, and a little bit of western, but not eastern, Texas. So locations in the west heat up quickly in June but then get some cooling off from the monsoon in July and August.

Many locations in South and East Texas share the late-summer timing of their hottest summer day with their neighbors: Louisiana and numerous locations in Mississippi and Alabama. But they also share it with locations along the West Coast from Seaside, Oregon, to San Diego.

In both cases, closeness to the ocean is at play. As summer wanes and days grow shorter, the land cools down more rapidly than the Pacific Ocean or the Gulf of Mexico. But the atmosphere continues to move ocean warmth (via tropical storms and regular rainfall) to inland locations well into September and October.