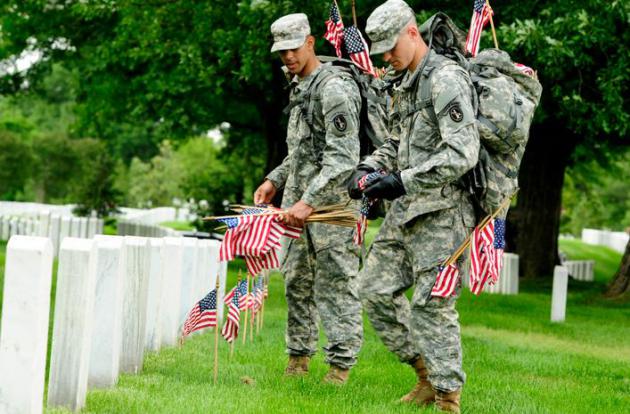 Super HeroesWe often escape to 18 screen movie theaters to cheer on our favorite super heroes, when in fact, they’re all around us.I’m proud of both my sons. One is a digital media entrepreneur with an up and coming blues band. The other is a Navy helicopter pilot. His daily sacrifices remind me how lucky we all are to have such dedicated soldiers defending this grand and fragile experiment we call America.A modest suggestion: instead of just thanking troops and veterans for their service take the next step. Ask how their families are doing – if you can help them find the right job – and if they’re getting the care they need to move forward. Treat them like your sons and daughters because, in a way, they are.

America’s Moisture Haves and Have-Nots. Dry weather persists over the southwestern USA into next Sunday, while heavy showers and T-storms fire up from the Plains and Upper Midwest to New England. A Pacific storm pinwheels heavy showers into the Pacific Northwest. Loop: NOAA NAM and HAMweather. 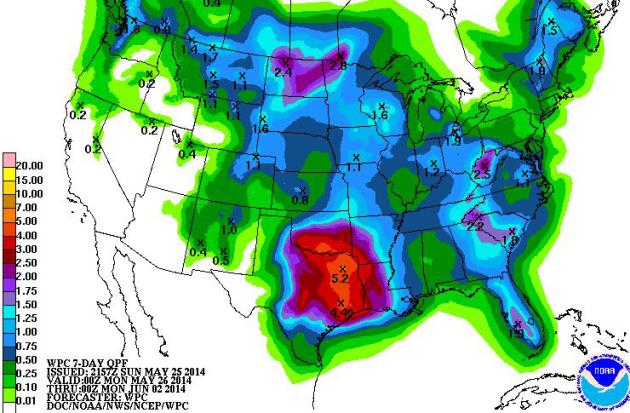 7-Day Rainfall Prediction. NOAA guidance is printing out some 4-5″ rainfall amounts over Oklahoma and Texas, which may take the edge off the worst of the (exceptional) drought in the coming days. The drought continues to worsen from New Mexico and Arizona to California.

Hurricane Amanda: Category 4 Strength Storm Not Expected to Hit any Populated Areas Along It’s Path. Strongest hurricane ever measured in the eastern Pacific in May? More details from International Business Times: “…Amanda is now the strongest May hurricane on record in the eastern Pacific basin during the satellite era,” Stacy Stewart, U.S. National Hurricane Center senior hurricane specialist, said. The system is expected to continue moving northward, well off Mexico’s Pacific coast. Scientists at the U.S. National Hurricane Center saw on Sunday afternoon Hurricane Amanda’s maximum sustained winds had decreased to near 150 miles (240 kilometres) per hour...” 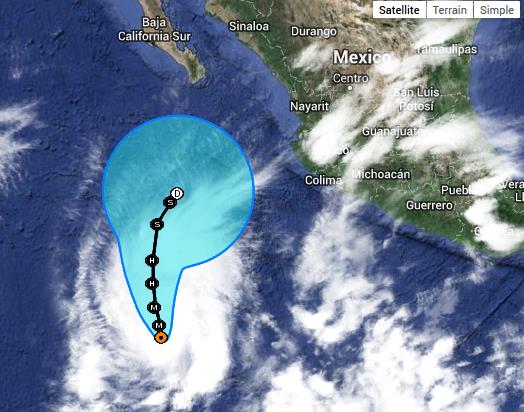 Hurricane Amanda. Hurricane season officially kicked off May 15, a full 2 weeks earlier than hurricane season in the Atlantic and Caribbean (due to consistently warmer ocean water). That warm water, possibly fueled by El Nino, has given birth to an impressive hurricane. More on Amanda at NOAA NHC. 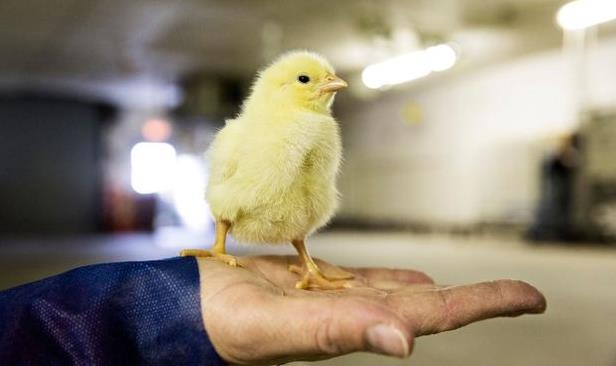 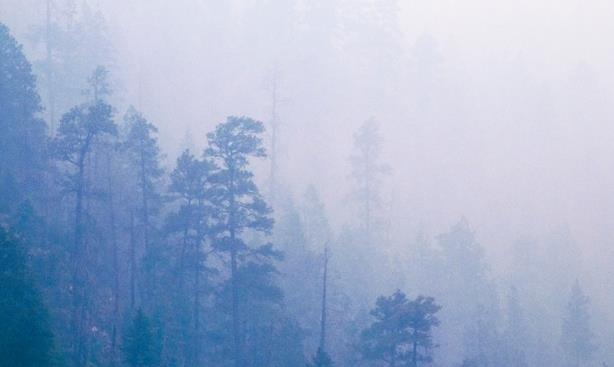 Alaska Battles Huge Wildfire While Arizona Struggles to Contain Blaze. Details from The Guardian: “Firefighters in Alaska on Sunday were battling a huge wildfire that was pushing towards hundreds of homes and vacation cabins, with residents urged to be ready for a possible mandatory evacuation, state emergency officials said. In Arizona, meanwhile, a wildfire burning in rugged terrain in a northern canyon grew significantly because of fires intentionally set by crews to rob the blaze of its natural forest fuels, officials said Saturday...”Photo credit above: “More than 100-foot flames consume ponderosa pine trees in Oak Creek Canyon in the Slide Fire south of Flagstaff, Arizona.” Photograph: Rick D’Elia/Corbis 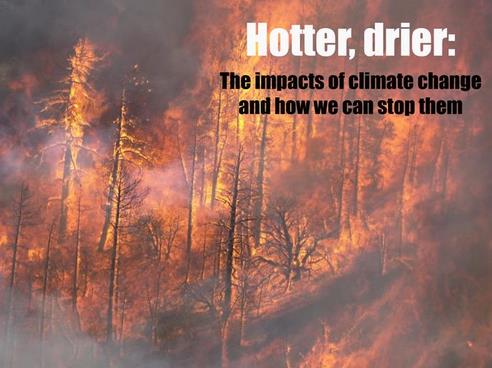 What If The Drought Continues For Another 10 Years. I’m reminded of an old Sam Kinison bit. “You’re living in a desert – move!” I love Arizona, but like many others I worry about an uninterrupted supply of water to keep the lights on and the local economy humming along. The western USA was settled during a relatively wet phase – what happens if the drought lingers, or gets worse? Climate models suggest dry areas will get drier over time, so this outcome may be more likely than you think. Pondering a worst case scenario here’s an excerpt from azcentral: “…If the current 15-year drought on the Colorado River continues for another decade, it will rival the “mega-droughts” that appear in tree-ring records. There are two ways that this could play out for Arizona and the Colorado River Basin. In one future, Lake Mead and Lake Powell are both dangerously low. Colorado River water deliveries are effectively reduced to whatever system runoff is available each year. Hydropower generation for the Southwest is minimal or non-existent due to low reservoir levels…” 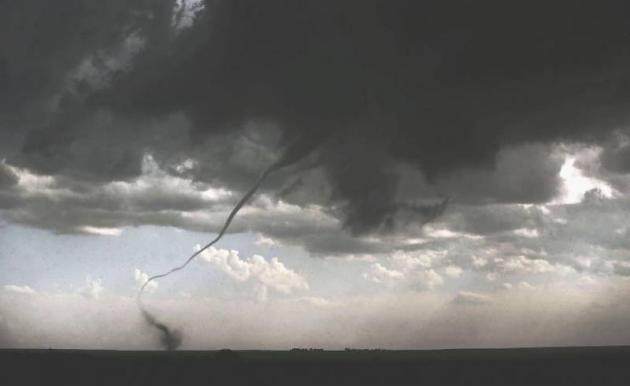 A New and Unexpected Twist to Life in Japan: Tornadoes. Twisters in Japan? The perception is that they’re on the increase, but is that a fluke, an aberration, or a true trend? Here’s an excerpt from The Japan Times: “…Yet the other day, someone asked what was new about life in Japan, seen from the context of almost 35 years of residency. And it hit me like a wall of wind: Tornadoes are new. They weren’t here when I first arrived. Well, of course, they were here. They were just rare and drew little attention. Sort of like — in a bit of a stretch — avocados. In 1980 in Japan you had to hunt to find an avocado. More than that, you had to hunt to find someone who even knew what an avocado was. And now avocados are as common as bananas. Almost…”Photo credit above: “No laughing matter: A tornado touches down in a field in Akron, Colorado, on May 7.” AP. 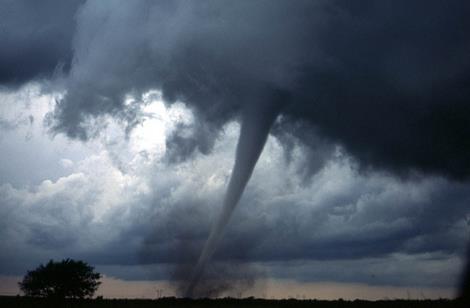 The Top 10 Surprising Tornado Facts. This comes from a publication in the U.K,with some interesting perspective on (rare) tornadoes on the other side of the pond. EF-4 to EF-5 tornadoes in England? I had no idea. Here’s an excerpt from The Tarboro Times:

Watch a Captivating Segment on the Physics of Wildfires. Here’s a clip from a very worthy article and video, courtesy of io9.com: “At the Missoula Fire Sciences Laboratory, researchers use wind tunnels, combustion chambers, fire-whirl generators and high-speed cameras to study the start, structure and spread of one of nature’s most bewildering phenomena: the wildfire…”