Holiday Season ApproachesHere’s a quick note to remind you that holiday season is quickly approaching… Can you believe that the New Year is only 48 days away?!? YIKES!! 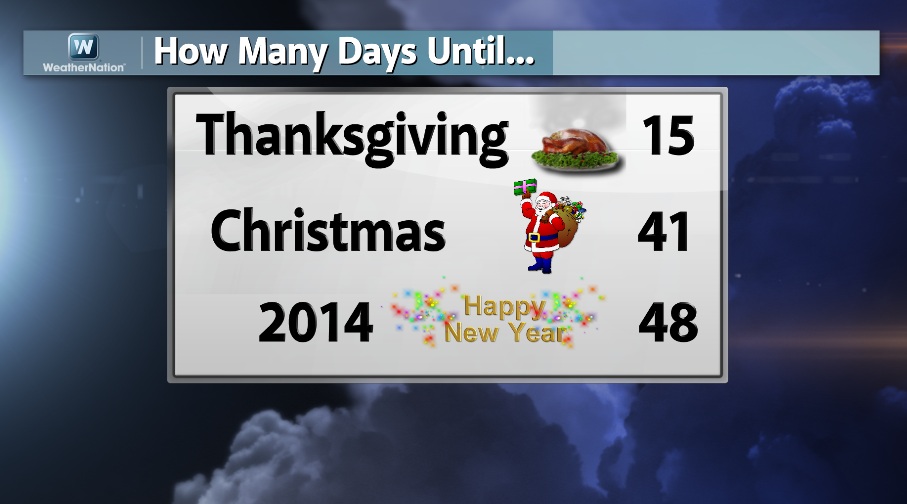 Feels Like Winter…Take a look at that Arctic front… YIKES!!! This is the same front responsible for our recent cold weather and widespread frost/freeze conditions east of the Rockies. Frost and freeze concerns have been posted as far south as the Gulf Coast States thru AM Thursday as temps could dip down into the 20s and low 30s. 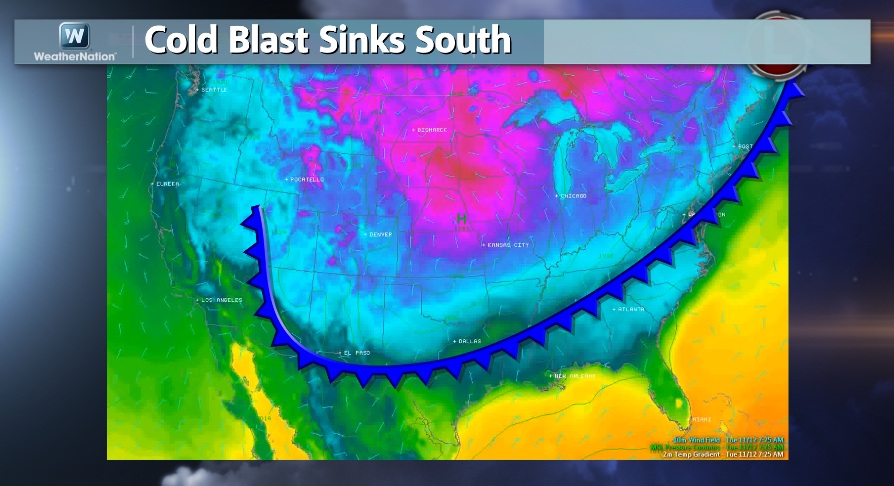 Looks Like Winter…As the first few Arctic outbreaks of the season swoop over the Great Lakes, heavy snows begin to pile up… This is a way of life in the winter for folks that live around some of these areas. Our latest Arctic outbreak is responsible for some pretty hefty snow tallies as of late, here are some of the latest images and info:

Here are some of the more recent tallies that piled up through midday Tuesday.

How Does Lake Effect FormThere are only a few ingredients needed for this interesting weather phenomena to occur. The first thing you need is cold air! Of course, that cold air has to be colder than the water temps. When the temperature difference is great enough (typical setup from the water surface to the 850mb level should be around 13°C), then you can start to see the makings of this unstable shallow atmosphere becoming more conducive for lake effect. The next thing you need is a “Fetch” of wind to carry the steam or moisture rising off the lake. This wind will gather the moisture into columns of growing clouds that begin precipitating downwind. If the air is cold enough for snow, then voila!

Average Annual SnowfallInterestingly, some areas in the lake effect snow belts can get quite a bit of snow during the winter. Here’s a looks at some of the highest tallies for some select cities.

Intense Front…The wind map from midday Tuesday showed the intense winds on the backside of the Arctic front as it was heading south. The strong winds and cold temps created a pretty good wind chill for a number of locations… 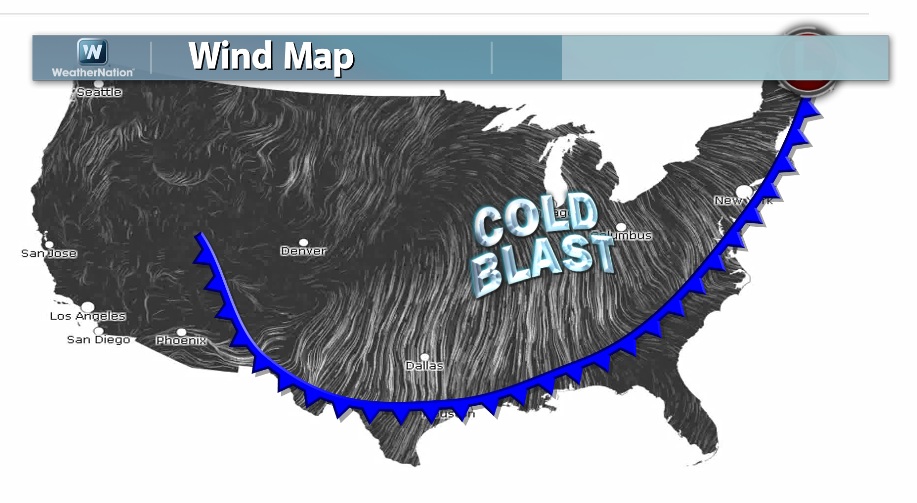 Intense Front Continued…I am always a big fan of this map when you can really see the change! The 24 hour temp change from midday Tuesday showed how significant the front really was and temperature changes were nearly 30F colder from Monday to Tuesday! 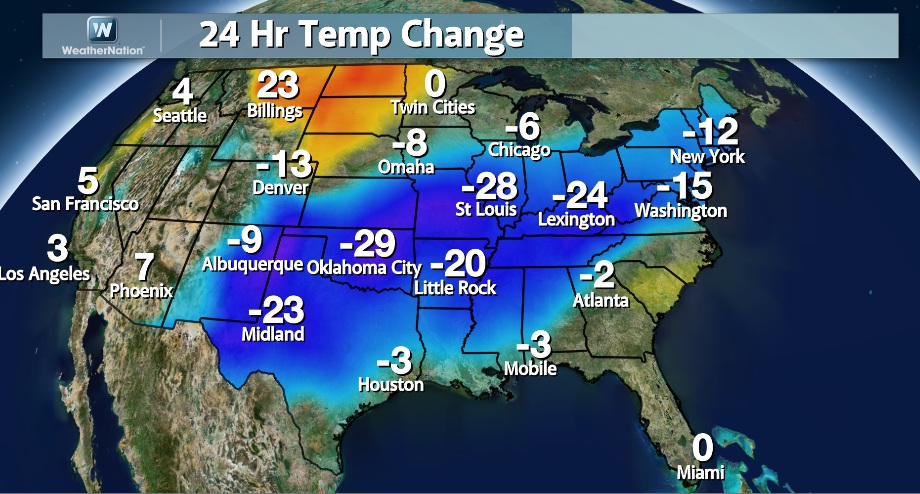 Forecast Lows/Frost & Freeze ConcernsThis kind of temperature regime is a growing season ender! Hard freeze conditions are expected for a number of locations AM Wednesday and again AM Thursday east of the Rockies… 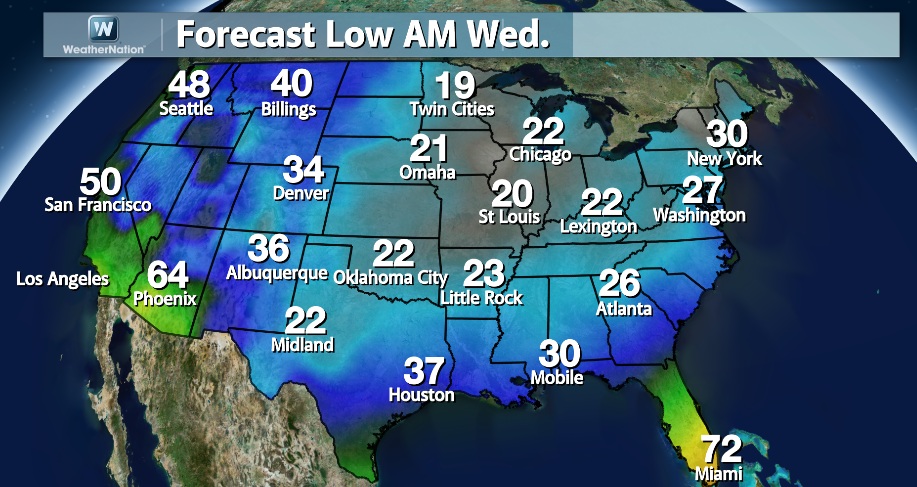 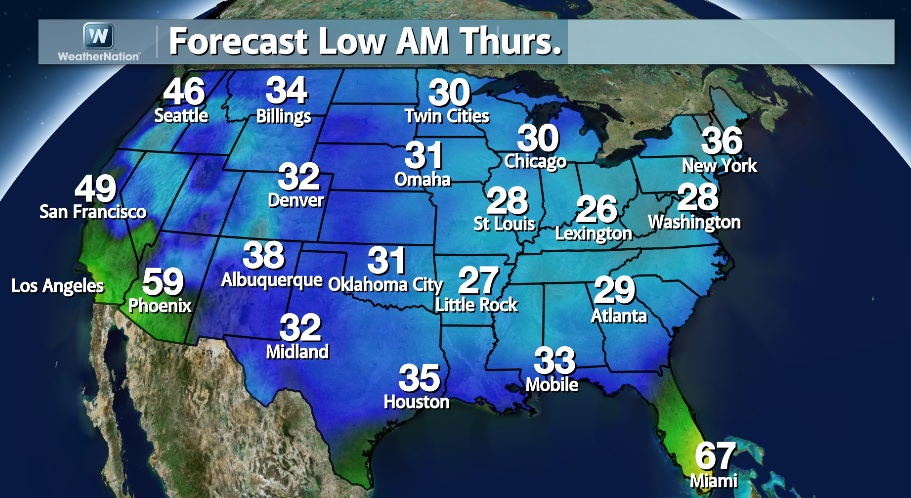 Here are the frost and freeze headlines that have been posted by the National Weather Service for AM Wednesday and AM Thursday. Note that locations for of these headlines have already seen their end of the growing season, so these headlines are no longer needed for the season. 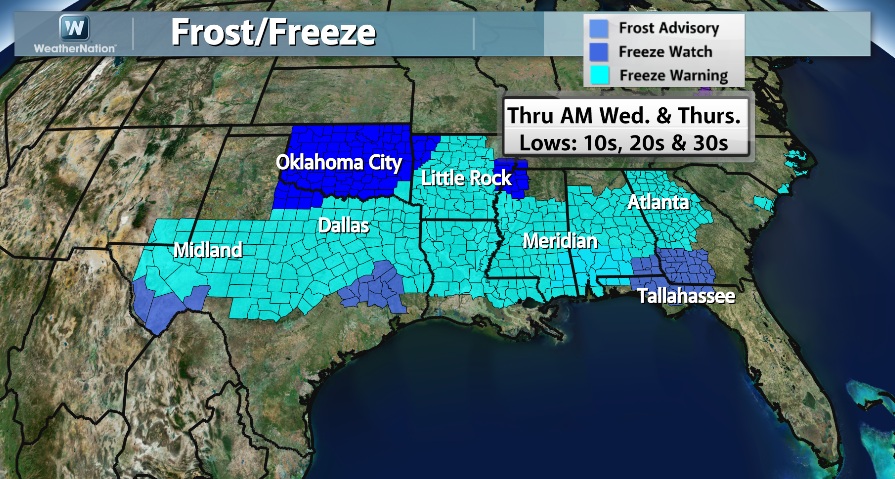 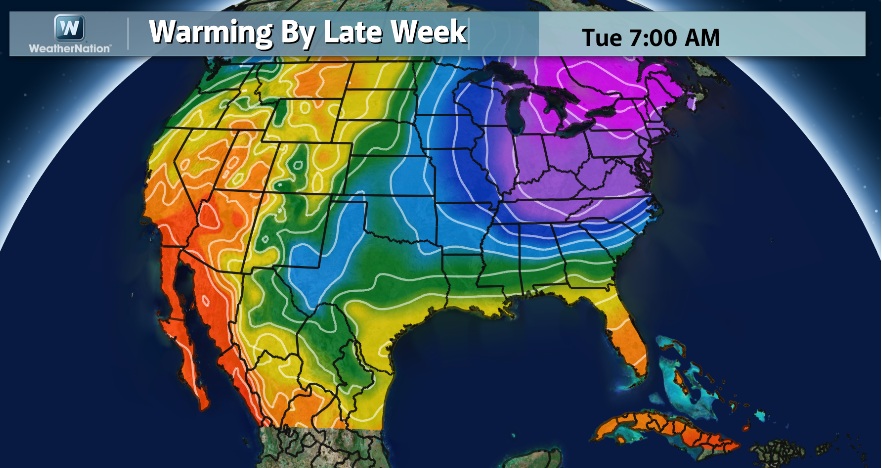 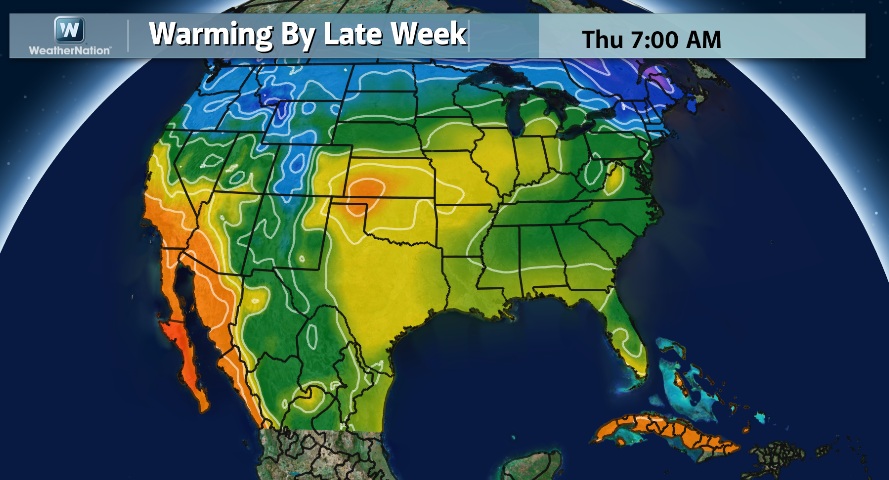 Forecast HighsTo reflect those temperatures, here are a couple of extended forecasts, note how the forecast calls for some warming by the end of the week/weekend. 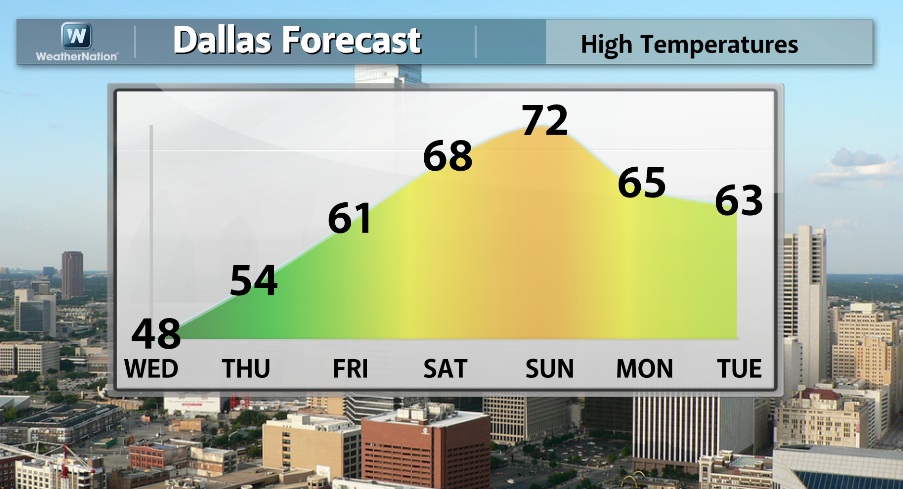 Developing Storm?Some of the weather models are hinting at a developing low pressure system in the Southwest by the weekend. This would suggests the return of moisture back to the middle part of the country into early next week. Another thing we’ll have to keep an eye on is the temperature profile as this could also mean the return of snow for some folks on the northern fringe of the storm as it tracks east through the week. 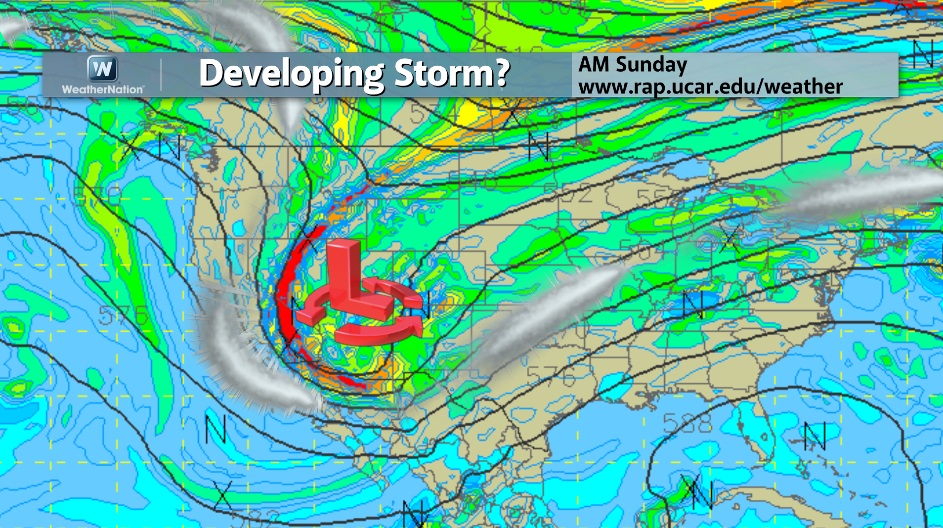 5 Day Snow OutlookAccording to the extended forecast, it appears that with the potential storm developing into the weekend, snow could be piling up in the mountains. Here the 5 day snowfall potential through Sunday. It’ll be interesting to see how models handle this storm through the rest of the week… if models keep trending in the direction we’re heading, there could be some snow potential for folks east of the Rockies into early next week too! Stay tuned… 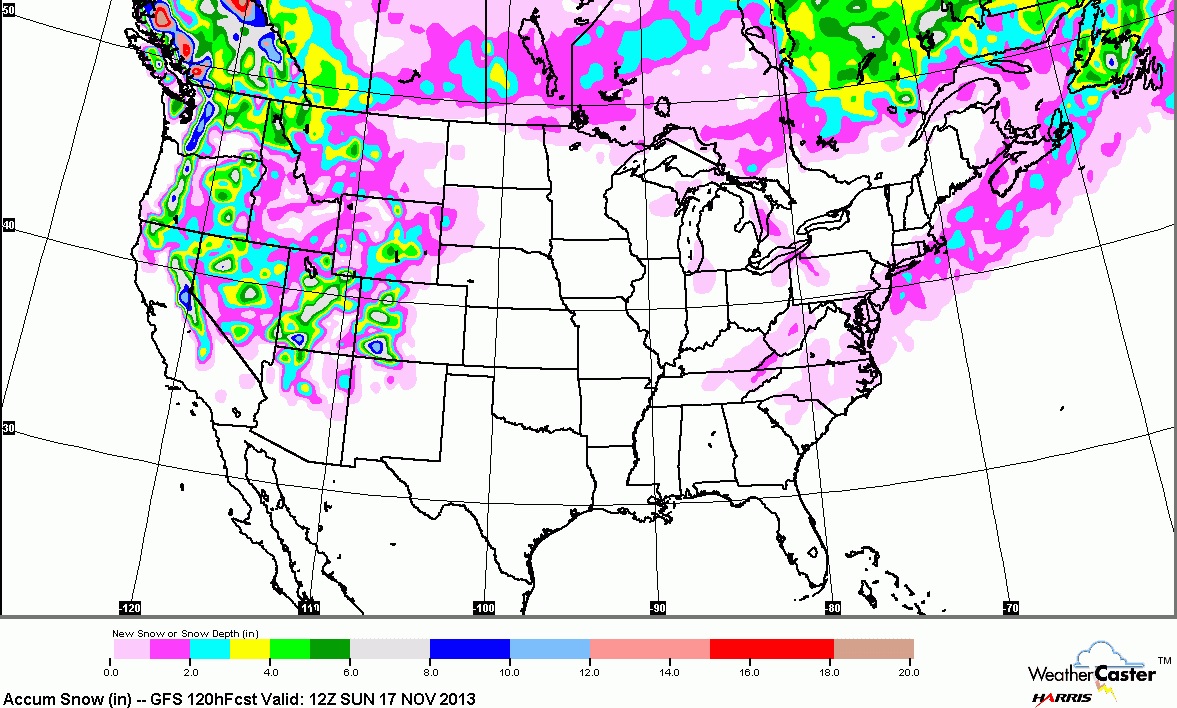 Thanks for checking in and have a great rest of your week.Don’t forget to check me out on Twitter @TNelsonWNTV