Mid-September Night’s Dream
With the Autumnal Equinox quickly approaching, many across the nation are probably seeing more sunrises and sunsets as daylight hours are dwindling fast. This is about the time of year when we lose daylight at its fastest pace. Thanks to the National Weather Service out of Columbia, SC for the Saturday sunrise picture below. 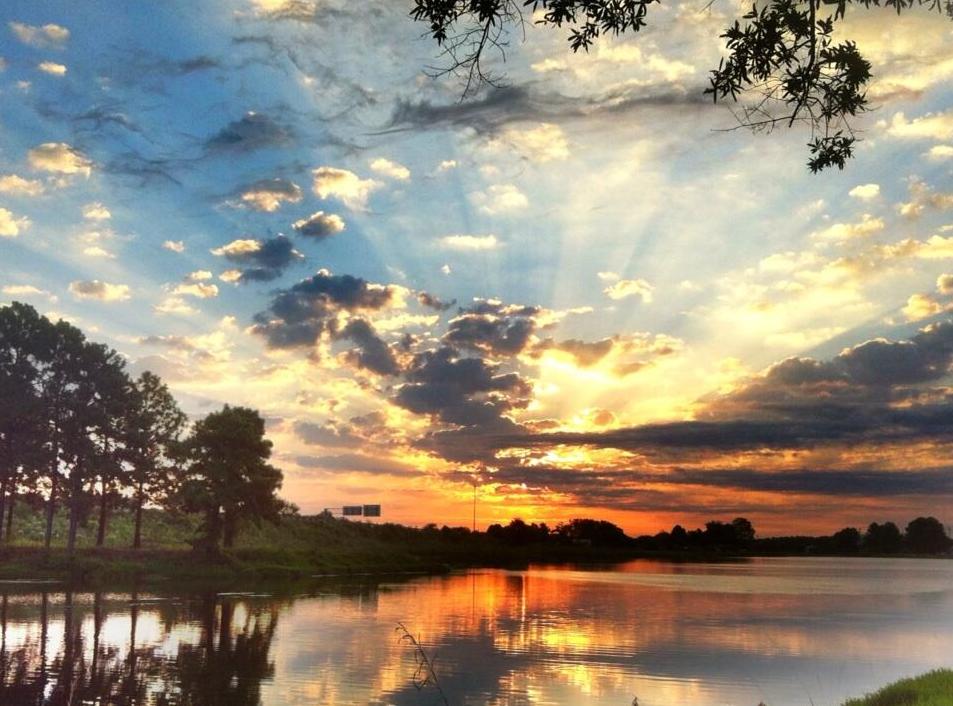 Length of Day
This is an interesting graph. Ever wondered how the length of the day changes at your latitude over the course of the year? See the graph below (courtesy osu.edu). Note where all the lines intersect, those are the Equinoxes. We are quickly approaching the Autumnal Equinox and that is the date at which there is equal day and equal night around the globe! 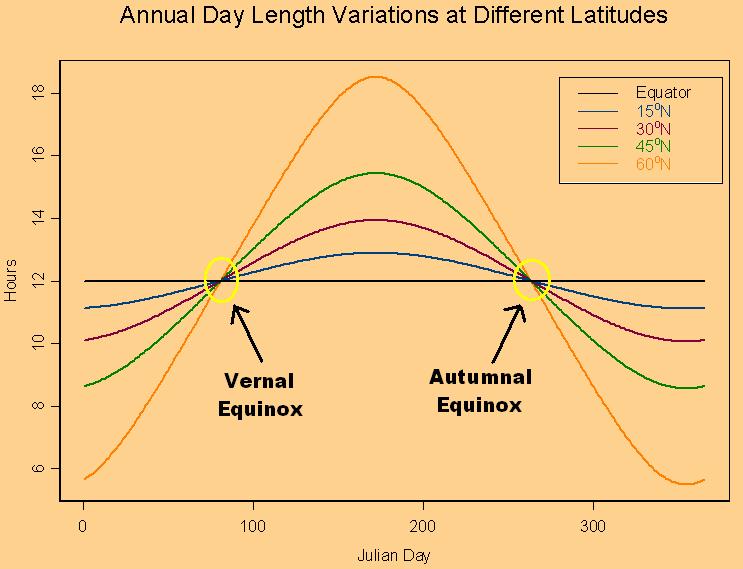 Frosty Great Lakes
With dramatic change in the length of day as of late, colder air is starting to build across the far north. Waves of this cooler air have been making more frequent visits to the lower 48 and it won’t be long before the growing season is over. Take a look at the frosty picture below from the National Weather Service out of Detroit, MI where they had some patchy frost on Saturday morning. 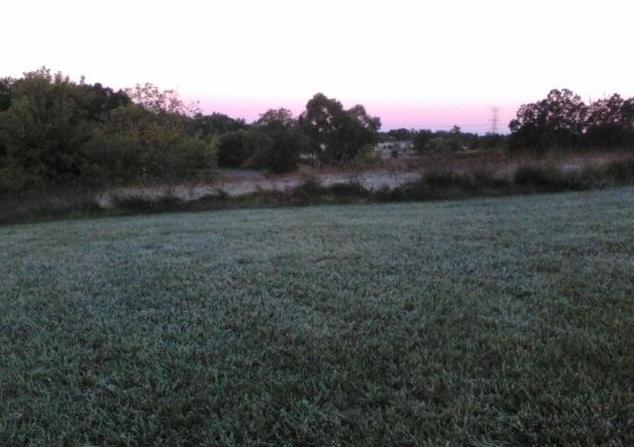 Cold Air Pocket
Look at the temperature map below (minus actual temperature values); note the big blob of blue over the Great Lakes Region on Saturday morning. This fall-like airmass settled in post front, which was responsible for several severe weather reports earlier this week in the Northeast. The good news for folks in the Northeast is that the cooler, drier air mass will stick around through the rest of the weekend. No more hot, sticky and stormy weather! 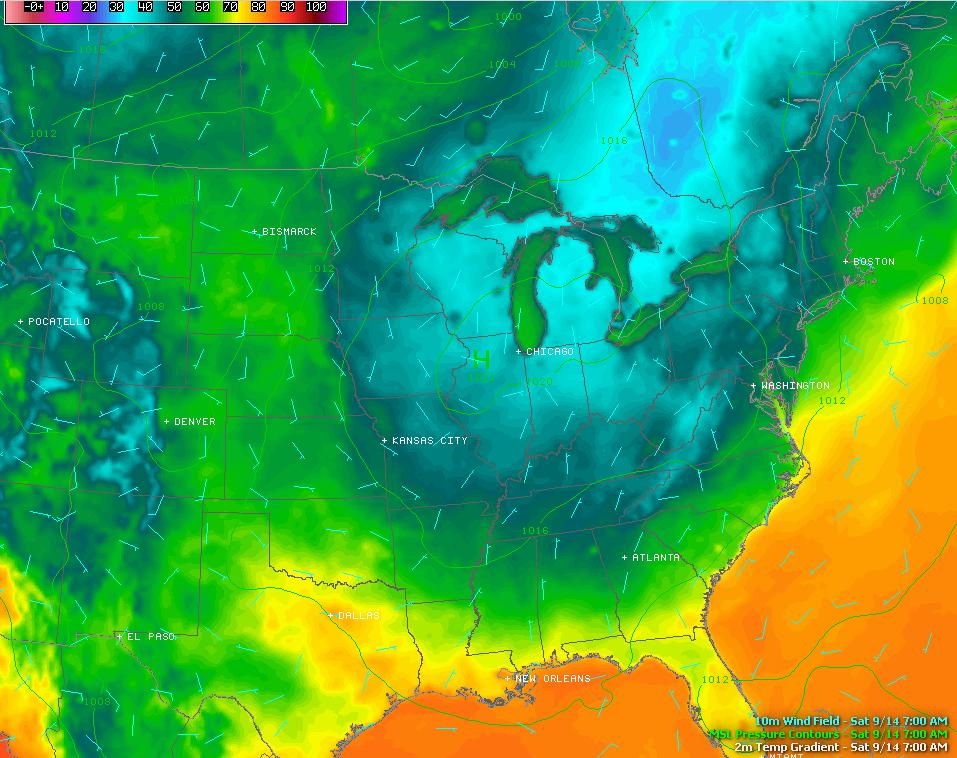 Football Weather
The cooler weather this weekend was perfect football weather for the eastern half of the nation. Thanks to Paul Douglas for the picture below who attended the Penn State vs. UCF Knights game on Saturday evening. The Nittany Lions couldn’t quite come back, but they made it interesting at the end. 34-31 in favor of the Knights.

Say So Long to the Summer Weather
Those who aren’t fans of the summer stickies and especially excited about this continued cool weather this weekend. Those who would rather have summer-like weather got their fill last week as temperatures soared to 10° to 20° above their normal mid-September values. The weather changed late last week as showers and severe thunderstorms blasted through along the leading edge of cooler weather we’re enjoying now. Take a look at one of the storms that rolled through New York late last week. Thanks to the National Weather Service out of New York, NY for the picture below which shows a shelf cloud rolling over the Long Island Sound.

Tornado Drought of 2013 Continues…
Thanks to the National Weather Service out of Corpus Christie via Lesllie Gilliam for the image below near Mustang Island. This is about as good as it gets lately with tornadic activity. Climatologically speaking, this isn’t typically a large tornado producing time of the year, that generally occurs in the spring (May averages 276 across the nation). However, it continues the trend of a much below average year for tornadoes. 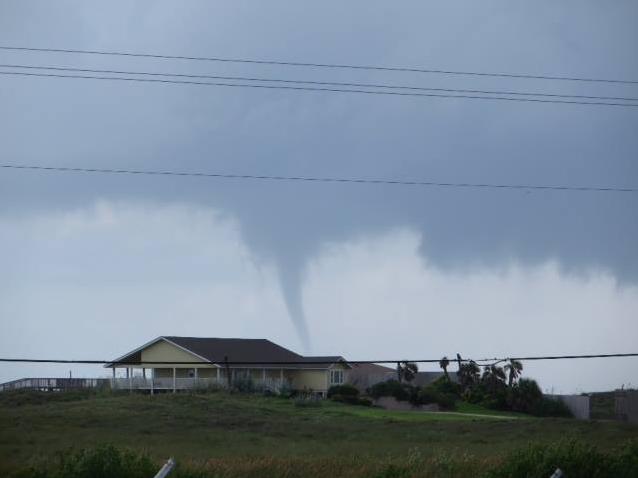 September Tornadoes
September isn’t typically a big tornado producing month, but according to the NOAA’s NCDC, the 1991-2010 average number of national tornadoes in September is 74 (see image below). So far this year, there have only been 3 PRELIMINARY tornado reports; 1 in Illinois on the 1st, 1 in Minnesota on 11th and 1 in Ohio on the 12th. The image below shows the average number of tornadoes in September by state. 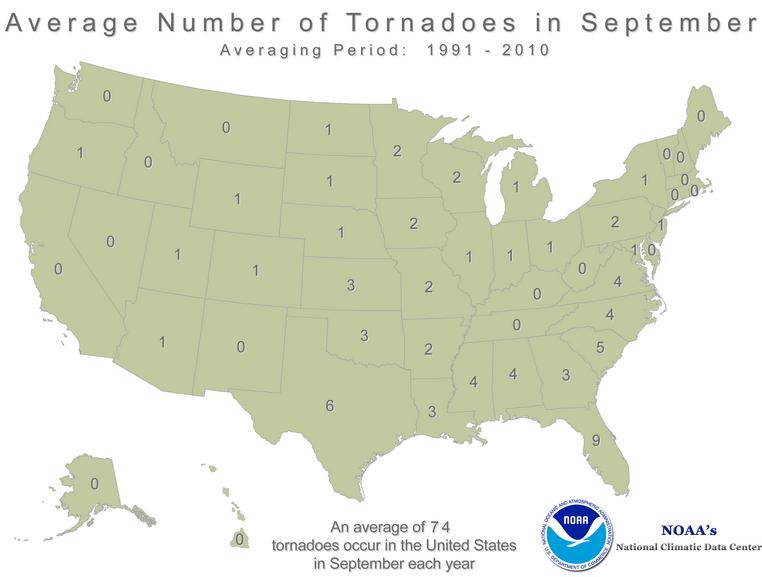 Compare Avgerage May Tornadoes
May is typically the peak of tornado season across the nation. According to NOAA’s NCDC, the 1991-2010 average is 276. The image below shows the average number of tornadoes in May by State. 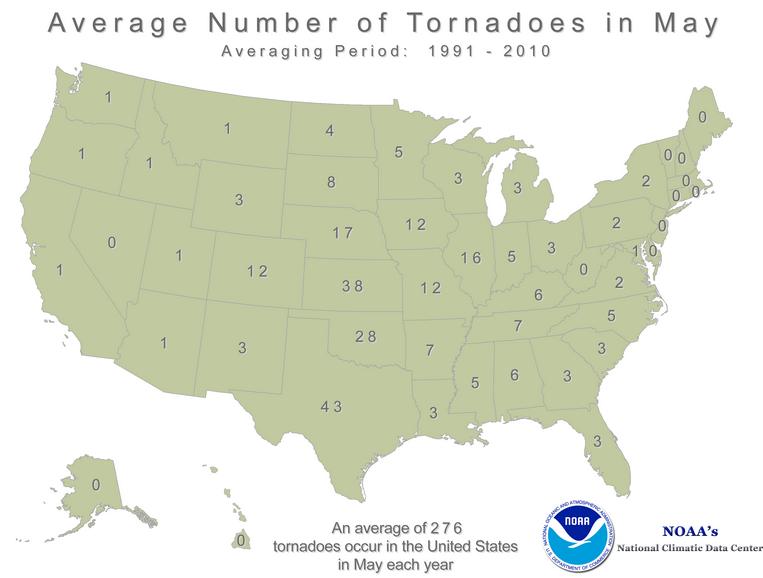 Tornado Drought of 2013
Not only are we well below normal for tornadoes so far this year, but according to NOAA’s SPC, this is the lowest number of tornado reports that we’ve seen since 2005! The image below shows the number of PRELIMINARY tornado reports for the year (thru Sept. 13), which is only 727. The 2005-2012 average thru that date is 1,295. Interestingly, last year, there were 1,116 tornado reports and 1,897 reports in 2011. 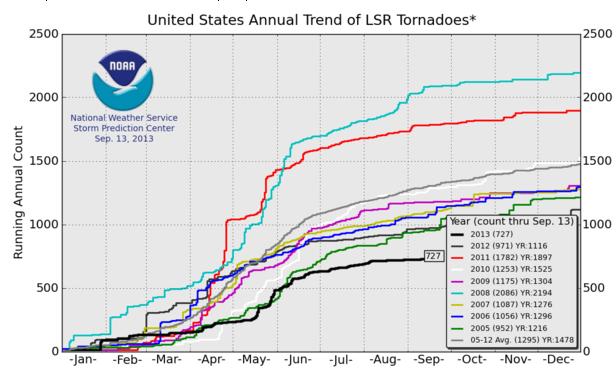 2013: The Year of Flooding?
Even though our tornado stats this year are below average, the weather has been able to take the national spotlight from time to time. However, flooding seems to have taken center stage a few more times than other big weather so far this year. One of the more recent stories that unfolded earlier this week was the major and deadly flooding along the Front Range of the Rockies and espeically in northcentral Colorado. The pictures and video that continue to emerge from the area are quite astounding! The pictures below are from a good friend of mine who was back in Colorado for a wedding as the heavy rain moved in. This is a golf course that he golfed at frequently when he lived there. 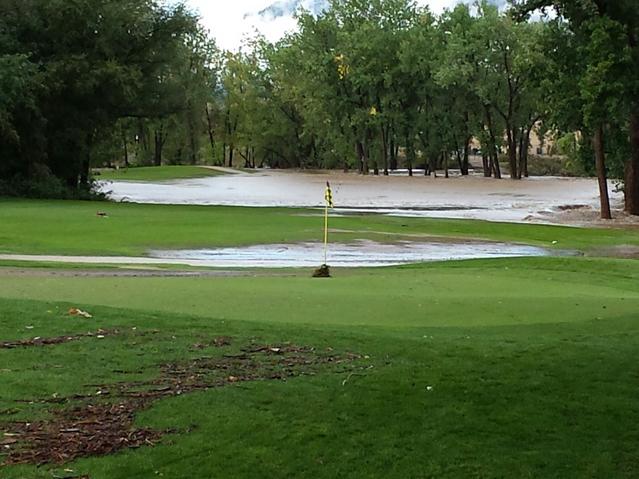 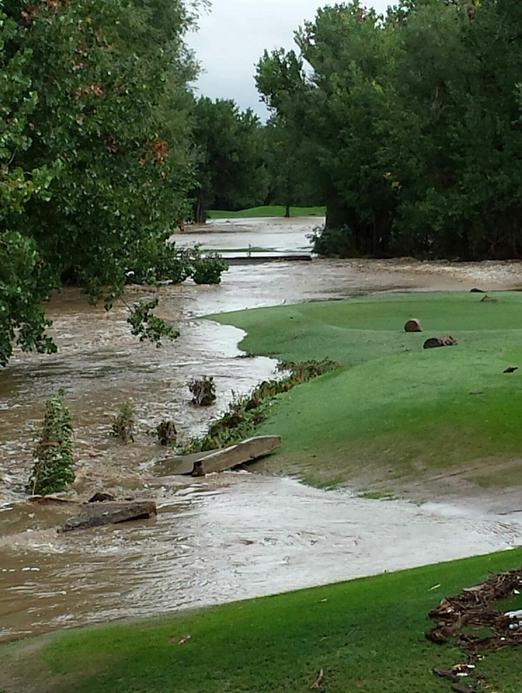 Deadly Colorado Flooding
The flooding in Colorado is truly astounding. With multiple fatalities and still several people missing or unaccounted for, thoughts and prayers for everyone dealing with this incredible event. My hope is that the loss of life doesn’t rise and further than it already has… Here’s the latest from CNN.com:

“The mission for emergency responders in northern Colorado Saturday: “To bring order to a chaotic situation,” as an incident commander put it. Waters receded some in the flood-devastated areas, but the rains were expected to fall heavy once again over the weekend. At least four people have been killed and 172 are unaccounted for, officials say. The number of missing peaked at 218 and is expected to continue to shrink.” 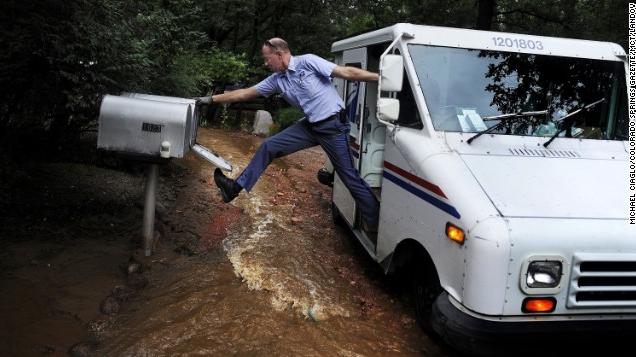 Record Rainfall
NOAA’s 7 day radar estimated rainfall is unreal. Keep in mind that most of this rain fell with a 24 to 48 hour window late last week. Based on the map below, there are a number of locations that have seen 10″ to 15″+ rainfall! 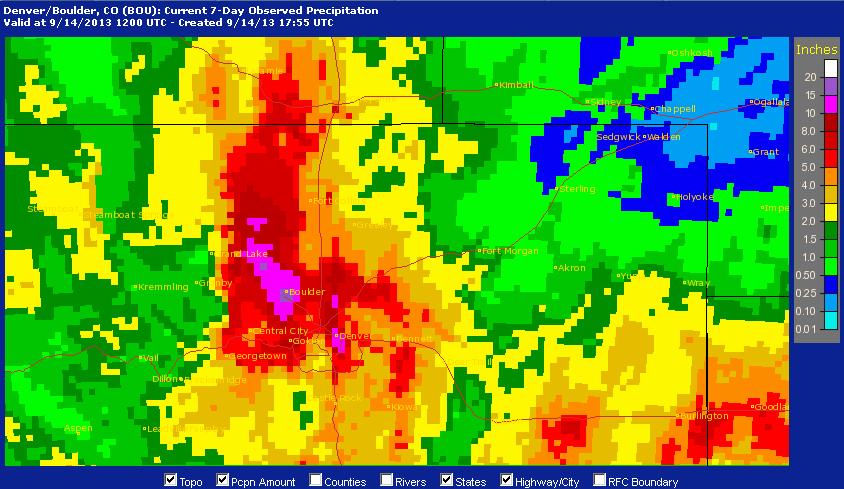 Here are some incredible stats that, colorado resident, Matt Kelsch, put together. Matt is the “official” Boulder, CO record keeper:

Here are some other rainfall tallies that were put together by offensive coordinator (very talented weather producer D.J. Kayser: 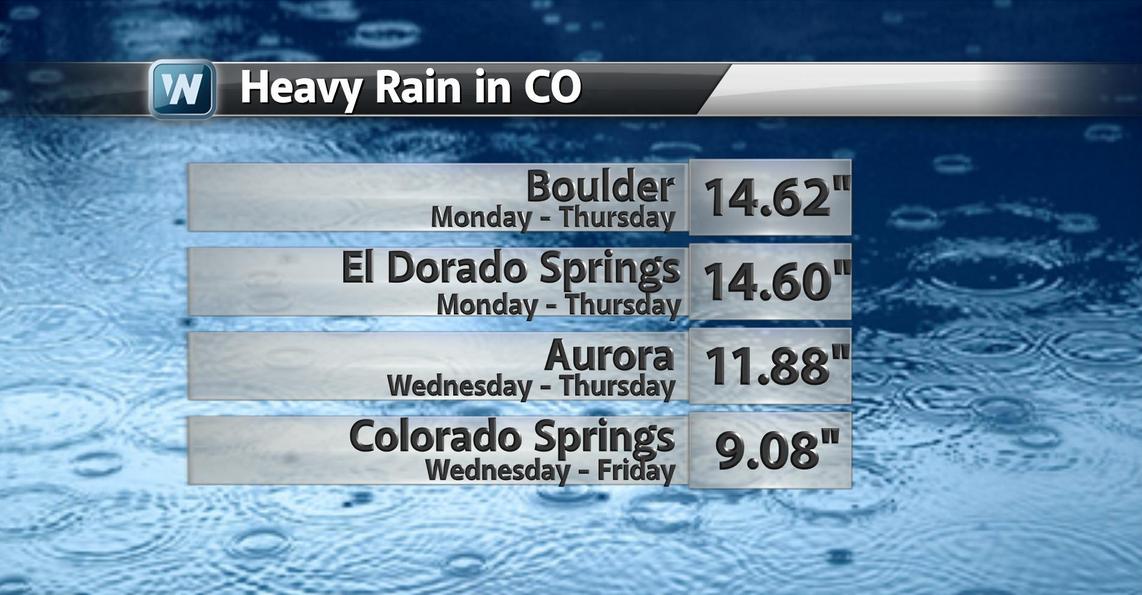 2013 Colorado Flooding Resources
The Denver Post has put together a nice interactive map of flooding resources, which can be viewed HERE:
Some of the news stories linked on that interactive map are crazy! 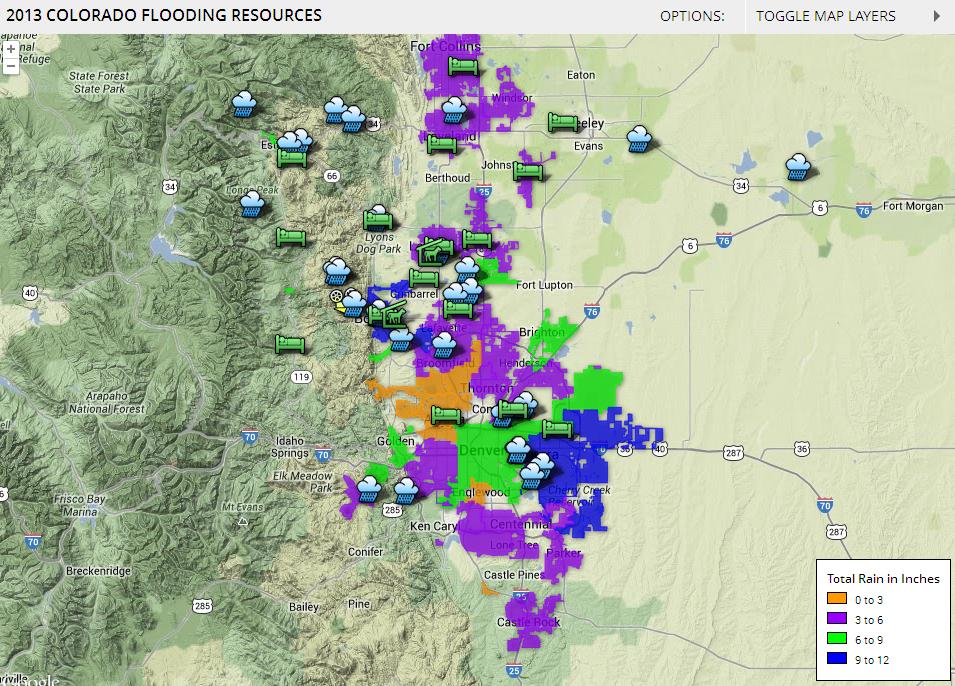 Record River Levels
Extensive rainfall has also led to record river levels! Take a look at this river gauge along the Big Thompson River, which has been running at record levels since late Thursday night! 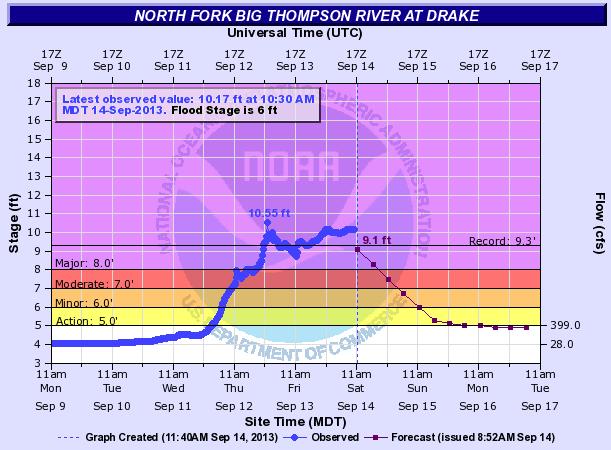 Here’s another one along the South Platte River near Kersey, which reached reached record stage midday Friday and peaked early Saturday morning 7ft. above the previous record stage! Note how rapid these increases are… This is part of the reason why flash flooding is so deadly! The rapid and unexpected rise in water levels can make your actions/decisions a life or death situation! 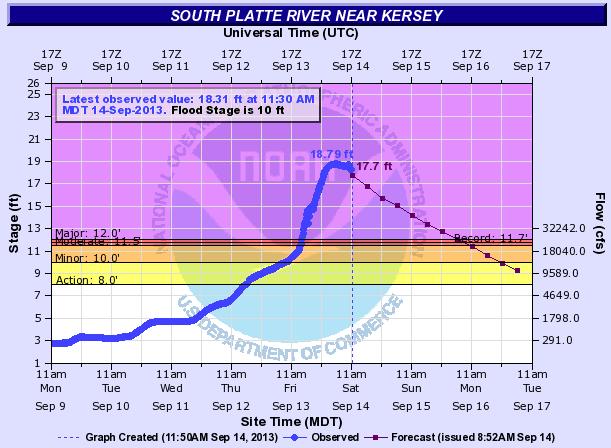 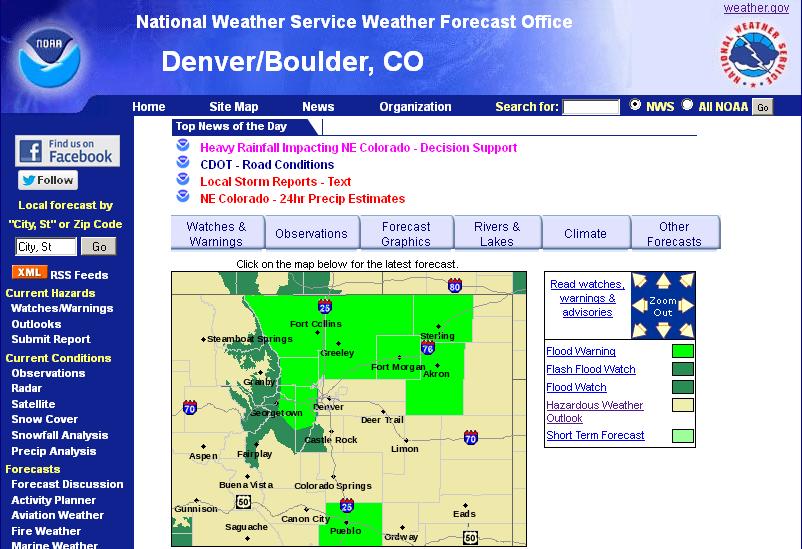 More Rain in the Forecast
Unfortunately, there’s more rain in the forecast over the next few days. According to NOAA’s HPC 3 day rainfall, there could be an additional 1″ to 2″ of rain with localized heaiver amounts. 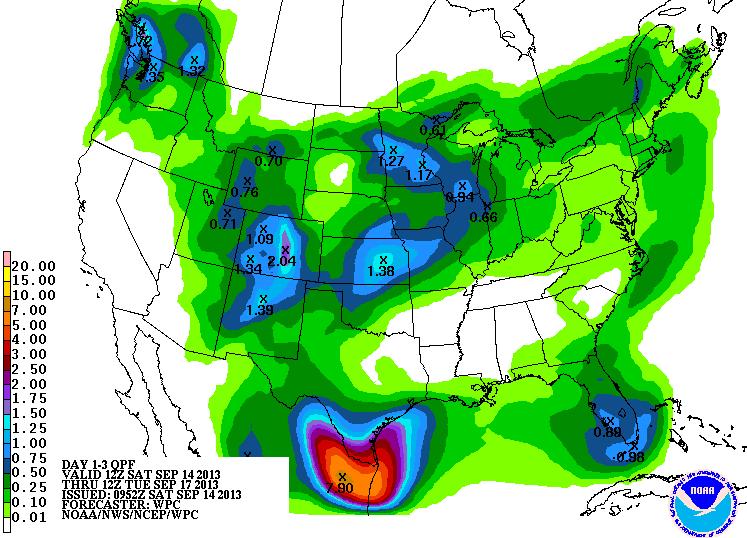 Flooding Down in Texas?
Take a look at that heavy blob of moisture in the Deep South, especially in southern Texas! That’s in response to our tropical system Ingrid, which is expected to send waves of heavy rain into the region through next week. However, the heaviest rainfall over the next 7 days is expected to fall mainly in northeastern Mexico. According to NOAA HPC 7day rainfall, there could be 10″+ in northeastern Mexico! Flooding certianly will be an issue over the coming days as Ingrid moves in. 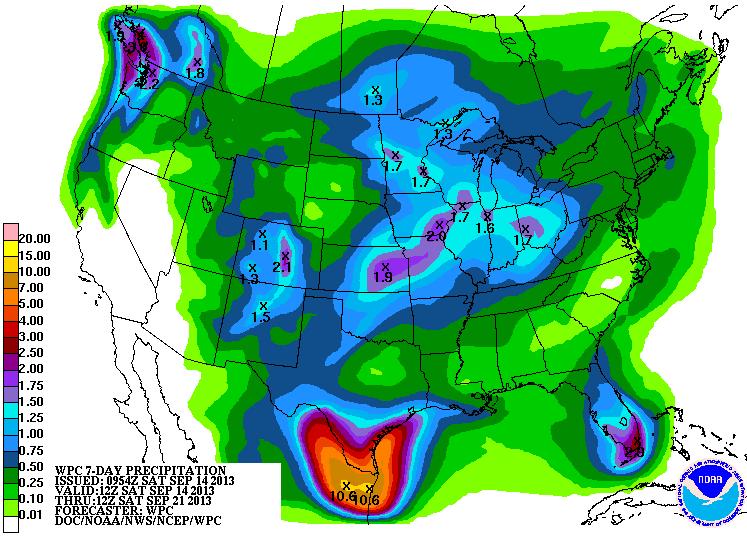 Tracking Ingrid
Ingrid is going to be an interesting storm to watch as it wobbles around the Bay of Campeche/Gulf of Mexico over the next couple/few days. The forecast track has it intensifying in the warm waters before making landfall in northeastern Mexico by early week. 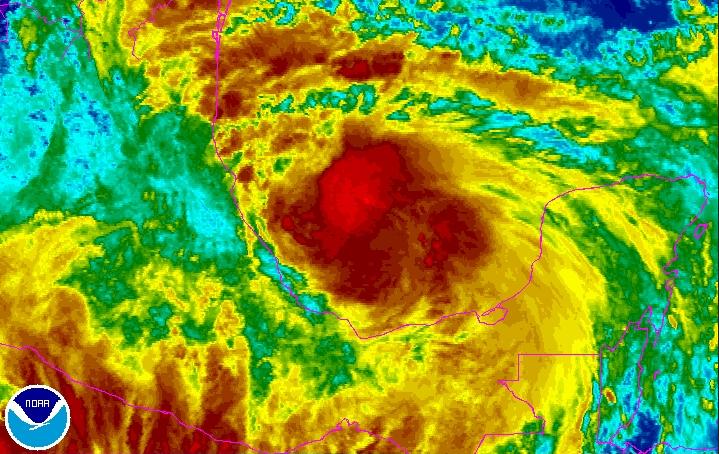 For the latest information and track, see more from the National Hurricane Center (NHC) HERE: 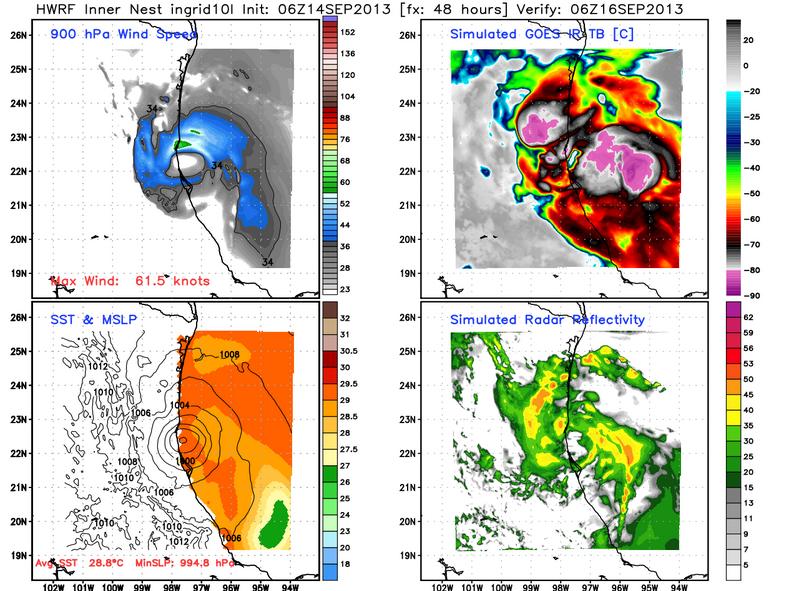 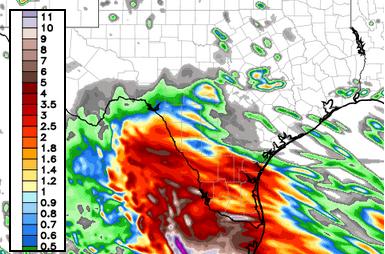 Texas Drought
Tropical systems tend to be drought busters and Ingrid could certainly be a very beneficial system if the current trend holds. Of course with has much rain as there is in the forecast, flooding may be a concern, but first things first… Take look at the U.S. Drought Monitor over the state of Texas and especially across the southern part of the state where extreme and exceptional drought conditions are in place. I expect to see some sort of a dent in this drought after all is said and done with Ingrid. 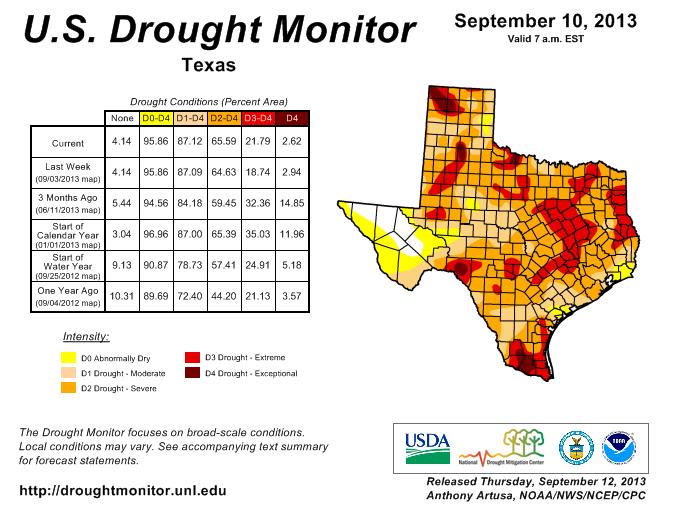 Thanks for checking in, enjoy the rest of your weekend.
Don’t forget to follow me on Twitter @TNelsonWNTV 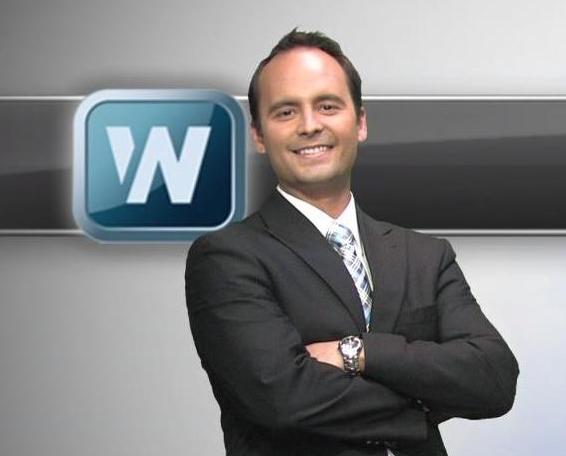