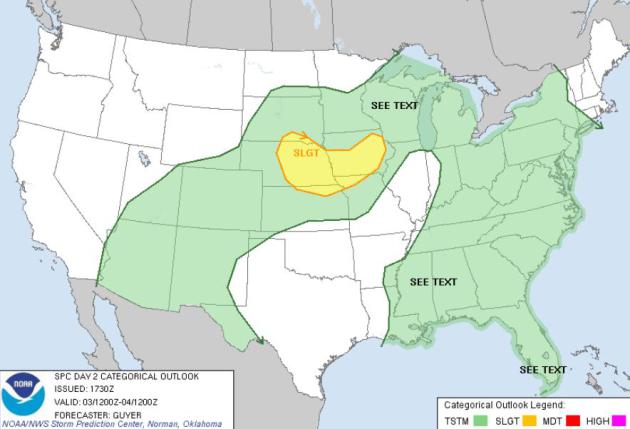 Labor Day Severe Threat. A ripple of low pressure tracking along the leading edge of drier air may set off a few severe storms with large hail from Omaha to Des Moines later today. Map: SPC. 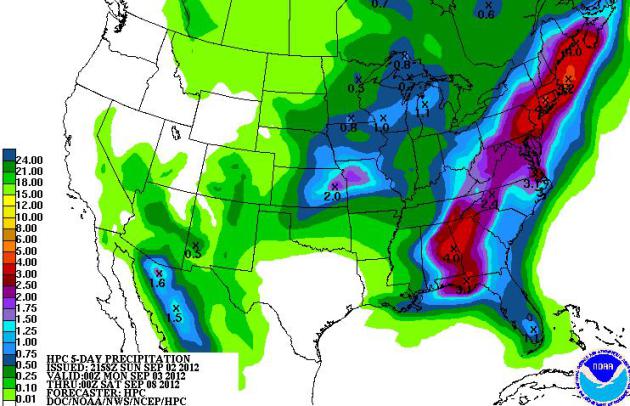 New England Flood Potential. NOAA HPC prints out some 3-5″+ rainfall amounts from New England into New York City and the Delaware Valley, another area of 2-4″ rains over the next 5 days across Georgia and Alabama. 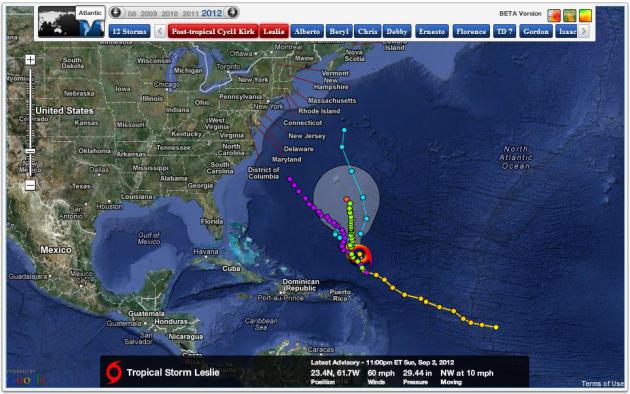 “Leslie”. The latest tropical storm northeast of Puerto Rico is forecast to become a hurricane, possibly threatening Bermuda by the end of the week. Odds favor a turn out to sea, but a few models are pulling Leslie closer to the east coast of the USA. Map: NHC and Ham Weather. 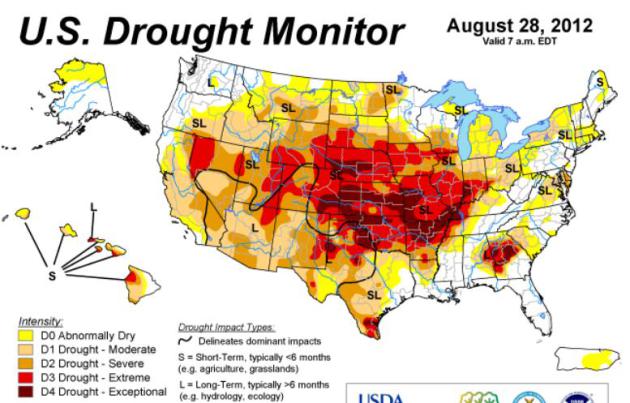 Lack Of Warning On Drought Reflects Forecasting Flaws. There are limits to how well we’ll ever be able to predict devastating droughts in advance. It’s true that La Nina patterns (Pacific cooling phases) often nudge the jet stream into a pattern that favors drought for the southern USA, but it’s a sometimes unreliable signal. More on the limits of drought prediction from Climate Central meteorologist Andrew Freedman: ” In May, the U.S. Agriculture Department predicted a record corn yield after farmers planted the largest area of corn and soybeans since 1937. Three months later, after a searing drought engulfed a wide swath of the continental U.S., those crops lie in ruin. Despite all of the resources at forecasters’ disposal, the worst drought to strike the U.S. in nearly 50 years came on largely without warning across the fields of the Midwest and High Plains during late spring and early summer. Between May 1 and July 24, the drought footprint in the lower 48 states expanded from an already high 38 percent to a devastating 64 percent, engulfing more than a dozen states in the process, including nearly the entire corn and soybean growing region. Judging by past droughts, the drought of 2012 will likely cost the U.S. somewhere on the order of tens of billions of dollars.”

Hurricane Isaac Highlights Gaps In Flood Protection, U.S. Senators Say. NOLA.com has the story; here’s an excerpt: “A group of high-ranking elected officials and top Army brass Saturday hailed the first major test of the New Orleans metropolitan area’s new flood protection system during Hurricane Isaac as a heartening success. But they attached several sobering caveats to their celebratory speeches during an afternoon news conference overlooking the Mississippi River….Even though the officials spoke at length about needed improvements, they also devoted considerable time to praising the metropolitan area’s new system, which cost about $14.6 billion. Col. Edward Fleming, commander of the corps’ New Orleans district, said “we clearly would have had overtopping of floodwalls” if Hurricane Isaac had hit before the new system was in place. He said storm surge that came up as high as 14 feet on the flood defense system’s new 26-foot barrier would have spilled over old barriers.” 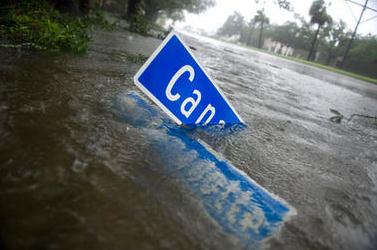 Hurricane Isaac Storm Surge Reversed Flow Of Mississippi River. Just when you thought you’d read everything about Isaac, along comes this story from The Christian Science Monitor; here’s an excerpt: “As hurricane Isaac reached southeastern Louisiana as a Category 1 storm earlier this week, it did something unusual to the Mississippi River: It threw the river into reverse. For nearly 24 hours, according to the US Geological Survey, Isaac’s storm surge drove upriver at a pace nearly 50 percent faster than the downstream flow. This backflow produced a crest some 10 feet above the river’s prestorm height at Belle Chasse, La., in flood-beleaguered Plaquemines Parish southeast of New Orleans. The surge added eight feet to the river’s height at Baton Rouge, father north. Isaac had help. A scorching, rain-starved summer in the middle of the country sent river levels to lows not seen since a similar drought struck the region in 1998, easing the Mississippi‘s flow.” 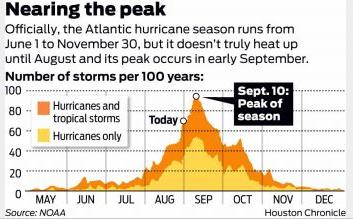 We’re Almost Over The Hurricane Hump For This Storm Season. The date you probably want to avoid a Caribbean cruise is September 10. That’s the day when landfalling hurricanes are most likely to strike the USA. More details from The Houston Chronicle: “When Tropical Storm Leslie developed Thursday, this Atlantic hurricane season jumped ahead of the record-setting 2005 season in its count of named storms. That’s because the 12th named storm in 2005, Tropical Storm Lee, didn’t form until Aug. 31. But the comparison ends there. Just like Hurricane Isaac was no Katrina, most of this year’s other tropical storms and hurricanes have been pale imitations of their 2005 counterparts. That year, in July alone, Category 4 Hurricane Dennis became the strongest hurricane ever in July. A week later, Emily became the first Category 5 hurricane in July.“

Site Suggestion: American Weather. If you’re interested in digging into the meteorology behind “Isaac” check out this web site, American Weather. Estimating hurricane landfall is still as much an art as it is a science – which model do you believe? Do you put your trust in an ensemble of models, a weighted average, or go on a limb with a favorite simulation? If you’re a true weather geek (um..enthusiast) you’ll like this one. Thanks to Randy Peterson for teeing this one up!

“Ask Paul”. Weather-related Q&A:
Hello Paul!
I’m a big fan of your blog and MN sunny days. Now the question… I live in Champlin (TC) and I’ve already noticed that a part of my Maple tree is changing colors as well as the Sumacs and Weigelia bushes but at the same time the summer flowers are still going strong, meanwhile, the critters are shedding like crazy and the geese look like they are getting ready to head south… So do you think we’re heading for an early fall colors (since we had such an early Spring) or is all part of my crazy imagination… ???
Sincerely confused,
Marianella

Marianella – I have never seen any research suggesting that leaves ripening early is in any way a predictive tool for the autumn or winter to come. In reality those yellow sugar maples are probably a reaction, to a lower sun angle coupled with unusually cool nights in mid-August, and most important: a growing drought across southern Minnesota. If it snows in mid-September (highly doubtful) you’ll be able to tell me “told you so!”

Hi Paul,
What is your prediction for this winter, 2012-2013?  Warmer, less snow?
Thank you, you are the best!
Cate Murphy
Thanks Cate – you may not feel that way after you get my forecast, more gut feel than anything based on science. Winters have been trending milder, with less snow in recent years. That’s hardly breaking news. It seems 1 in 4 or 1 in 5 winters is a “real, butt-kicking Minnesota winter” with significant cold and snow. We’re heading into an El Nino, which correlates with milder temperatures and somewhat less snow for northern-tier states. I suspect we’ll see more snow than last winter (22 whopping inches in the metro), but less than 2010-2011, when 86″ fell. My hunch: 40-50″ snow; colder than last winter, but not as severe as two winters ago. Time will tell. 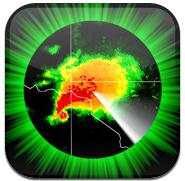 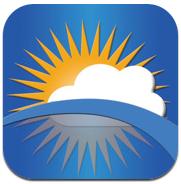 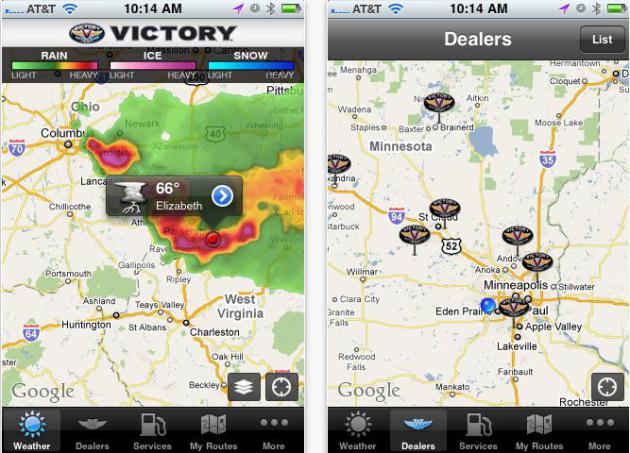 In his weather page in the Star Tribune a couple of weeks ago Paul mentioned 2 weather apps he liked best. One he had done but no longer gets money from, and another one. I wrote them down and have lost the paper. I would appreciate it if you would send me these names.
Thanks.
Sue Stover
Sue – my favorites are My-Cast Weather Radar (which sends out severe weather alerts in addition to Doppler radar and even lightning strike data (for a surcharge). The other is RadarScope, which is still the best Doppler app out there, in my humble opinion. Neither is free, but if you’re a weather enthusiast you’ll get your money’s worth. Full disclosure: My-Cast was my previous company, which we sold to Garmin in 2007. I no longer have any involvement with the company and don’t receive any $$ for recommending the app. But it’s partially my baby, and I’m happy to see it getting so much national attention. The team at Digital Cyclone has done an amazing job upgrading the app and keeping it current. I would add one more (free) app to the list: “Victory Rides” for Polaris, which is a current client. Again, the app is free – we receive no compensation for the sale of this app on the iTunes store. Good luck!