No Rest for the Weary

Northern Lights
Great picture from James Helmericks out of Alaska (Shared by the National Weather Service Alaska Facebook page)!
“While out seeing how many stars I could see in Orion for the Globe at Night project the Aurora came out to dance. Took a photo of the Colville Village cotton shelter and drifts under the aurora.” 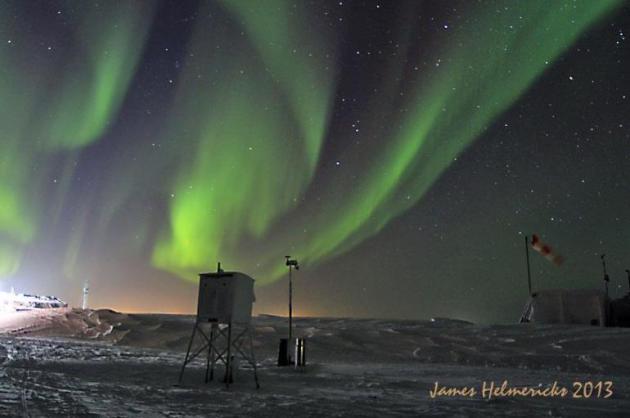 Clipper-Fest Continues
Take a look at the webcam from earlier Monday out of Chicago! Fast moving clipper systems have been sailing through the Upper Midwest/Great Lakes Region since late last week. Each system has dropped a couple/few inches of fluffy snow in a narrow band, which has already added up to shovelable/plowable amounts since the start of the month. Snow AM Monday led to substantial flight delays in Chicago, which may be possible again Tuesday as another clipper rolls in. 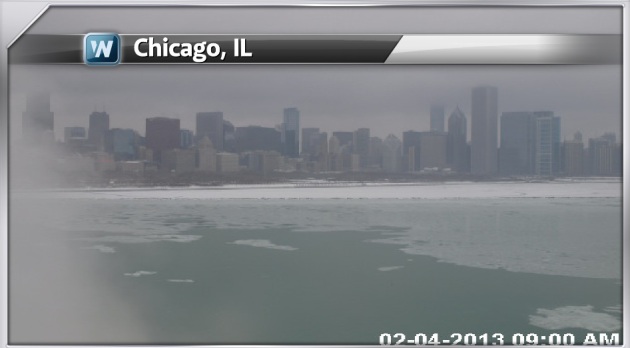 Monday Snow Totals
Here are some of the snow totals that were tallied across Chicago from PM Sunday-AM Monday. 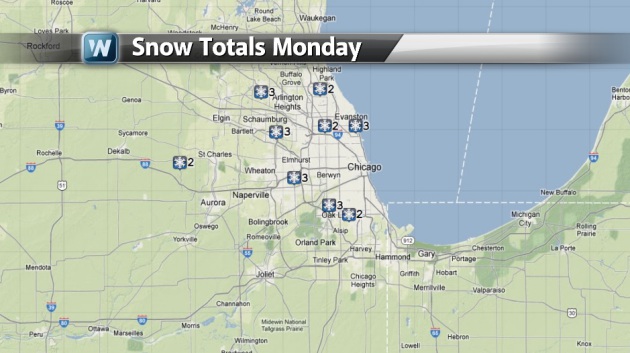 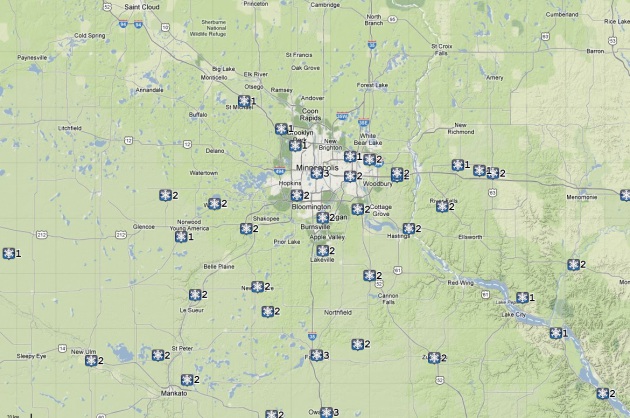 Fresh Snow
One thing about fresh snow is that it really brightens the landscape doesn’t it? I have to admit, I actually kind of like not having to stare at ugly brown snow piles. The image below suggest how much snow we’ve seen since the start of the month! Keep in mind that snow tallies from Sunday-Monday haven’t been added into the data below. 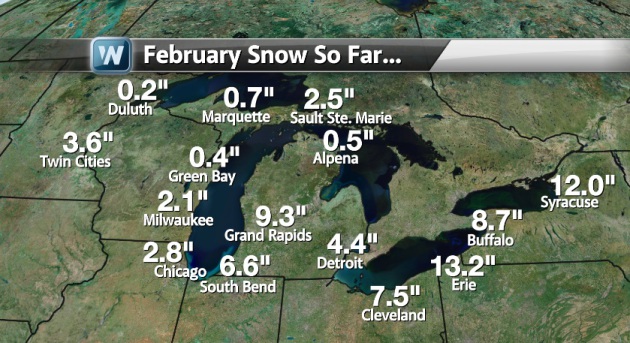 Snow Season to Date
Interestingly, we’ve seen nearly half the seaonal snow in Chicago so far this month and more is on the way! 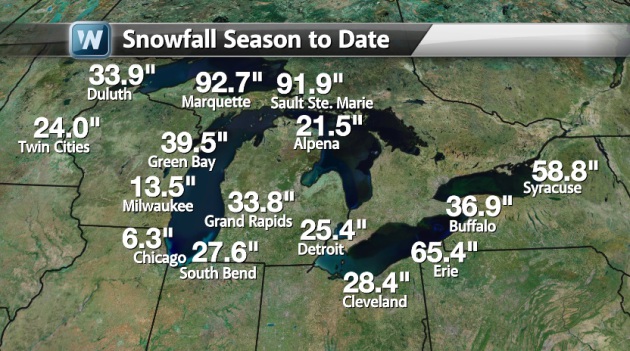 Seasonal Snow Deficit
Despite the recent snowfall as of late, we’re still quite a bit behind schedule. There are still several spots with large season snow deficits. It appears that we’ll be making up for lost time through the rest of the week and potentially again late weekend. 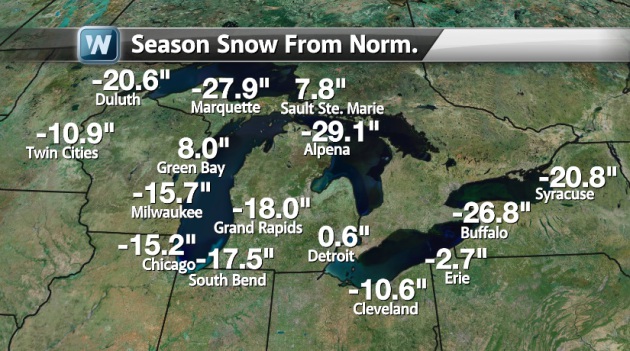 Cold Blog Steers Clippers
Low temperatures Monday morning revealed the clipper storm track pretty well. These fast moving (fairly week) systems are riding the edge of the Arctic air, which is bottled up north of the Great Lakes and around the Hudson Bay. 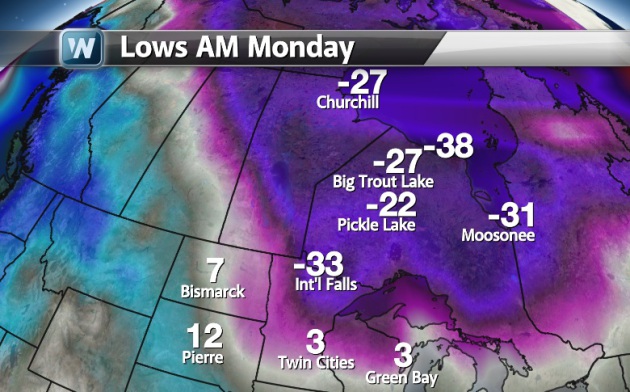 Clipper-Fest Continues
We’re not quite done with clippers just yet. We’ve got at least 2 more before the weather pattern chances this weekend. The image below suggests the additional snow from PM Monday-PM Wednesday. The darker blue across northern Minnesota would suggest the possibility of nearly 4″ to 6″ through that time. 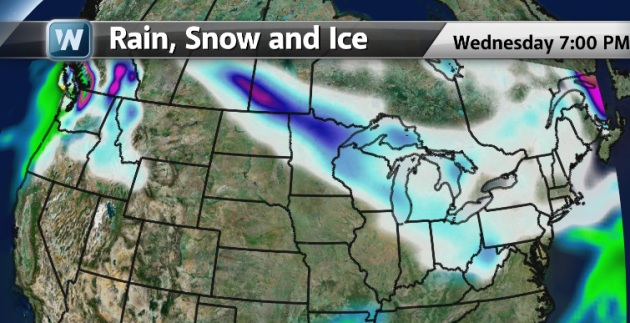 Weekend Storm System…
Take a look at the storm system over the Pacific Ocean. This is going to be the next system that makes waves across the mid-section of the nation by late weekend/early next week. 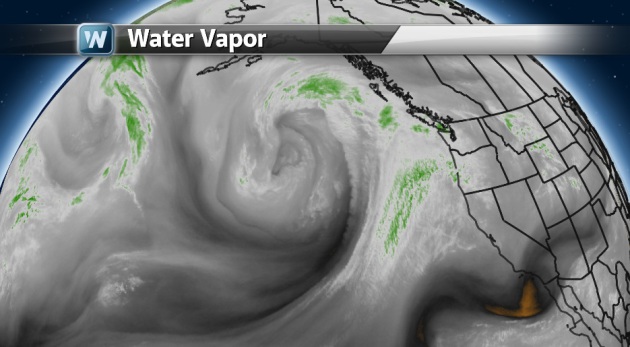 Late Weekend Storm
Here’s the storm progged by late Sunday/AM Monday over the middle part of the country. Note the heavier snow swath on it’s northwestern flank. This could bring shovelable/plowable snow from the Central Plains to the Great Lakes. 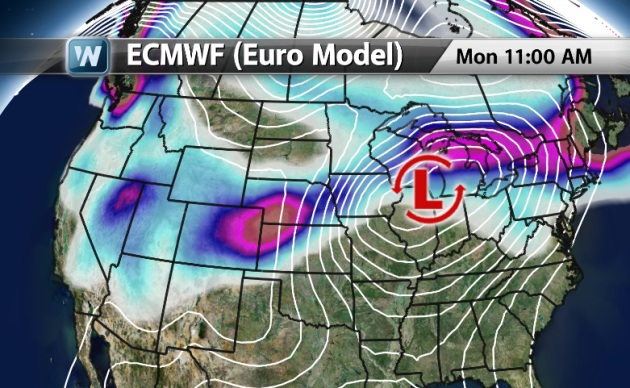 Differences in Model Runs
It is important to keep in mind that this is a developing storm and the forecast WILL CHANGE!!! The image below was the 6pm Sunday ECMWF model run. 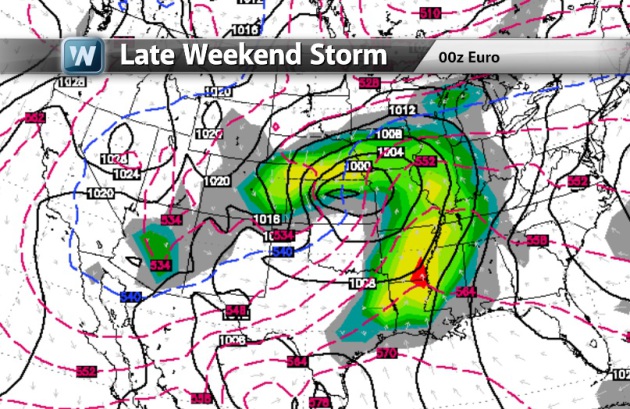 The image below shows the same storm, but this is a little newer run from 6am Monday… The other thing we’ll have to keep an eye on is the severe weather potential across the Lower Mississippi Valley. 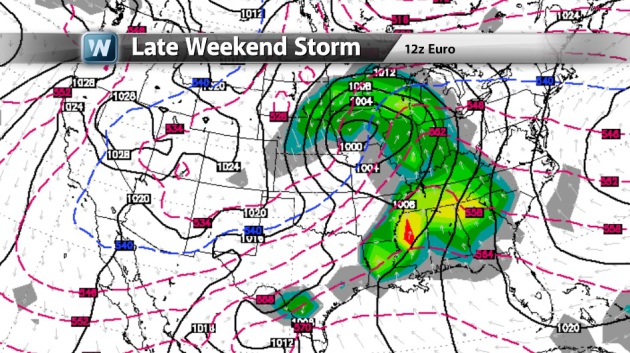 Thanks for checking in and have a great rest of you week!
Don’t forget to follow me on Twitter @TNelsonWNTV 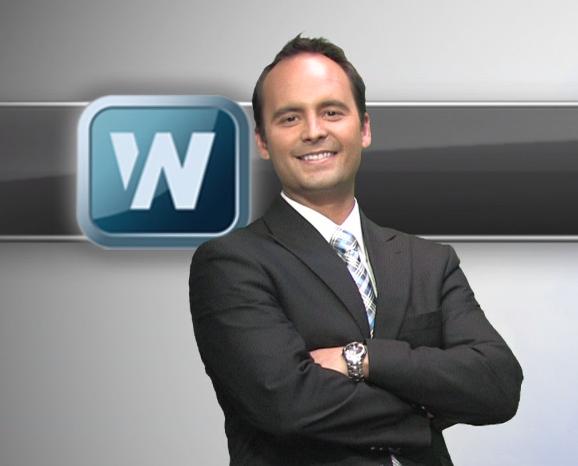