P-3 Orion: Into the Storm

Slicing through the eyewall of a hurricane, buffeted by howling winds, blinding rain and violent updrafts and downdrafts before entering the relative calm of the storm’s eye, NOAA’s two Lockheed WP-3D Orion four-engine turboprop aircraft, afectionately nicknamed “Kermit” (N42RF) and “Miss Piggy” (N43RF), probe every wind and pressure change, repeating the often grueling experience again and again during the course of an 8-10 hour mission. 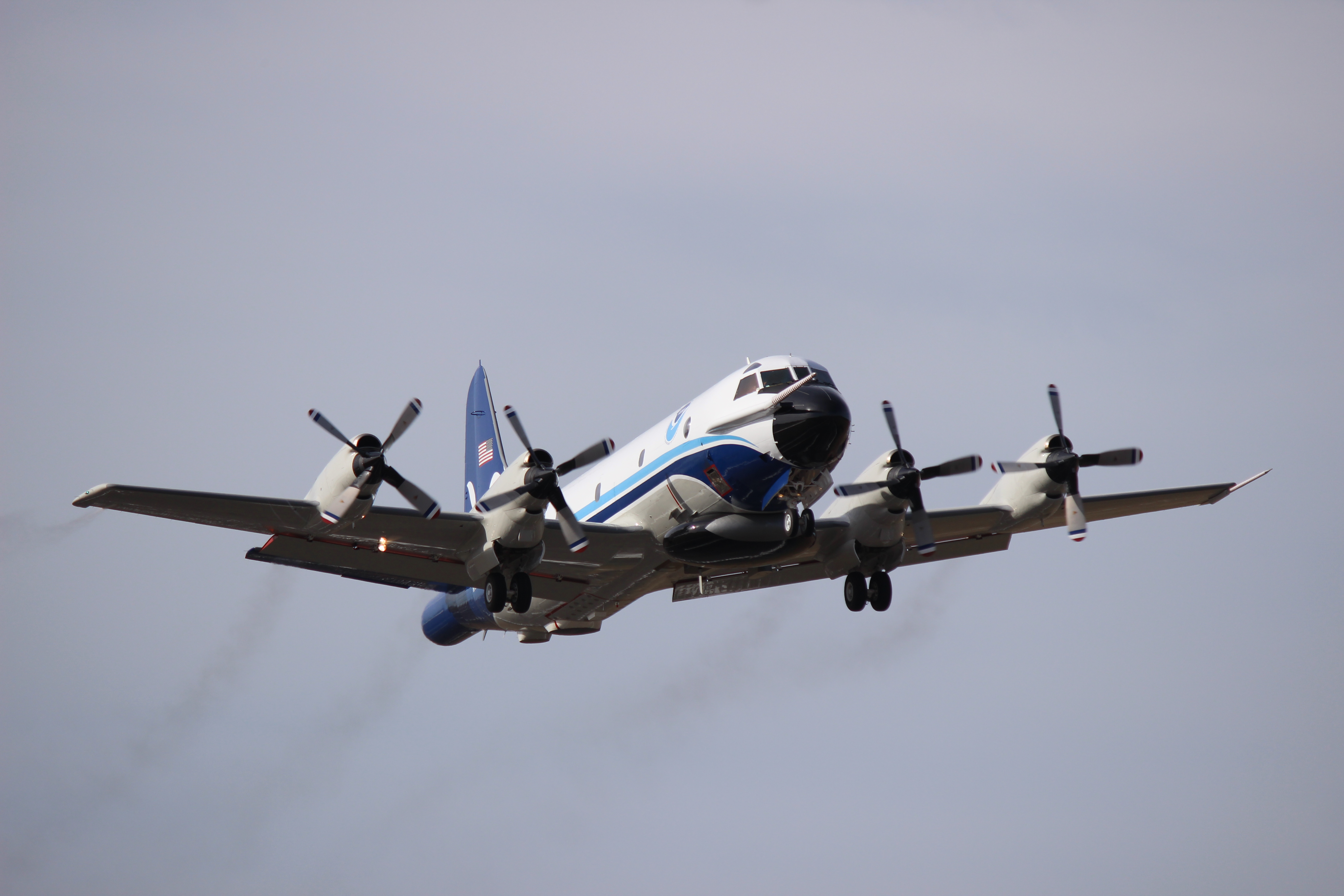 Scientists aboard the aircraft deploy Global Positioning System (GPS) dropwindsondes as the P-3 flies through the hurricane. These instruments continuously transmit measurements of pressure, humidity, temperature, and wind direction and speed as they fall toward the sea, providing a detailed look at the structure of the storm and its intensity. The P-3s’ tail Dopper radar and lower fuselage radar systems, meanwhile, scan the storm vertically and horizontally, giving scientists and forecasters a real-time look at the storm. The P-3s can also deploy probes called bathythermographs that measure the temperature of the sea.

In addition to conducting research to help scientists better understand hurricanes and other kinds of tropical cyclones, NOAA’s P-3s participate in storm reconnaissance missions when tasked to do so by the NOAA National Weather Service’s National Hurricane Center. The purpose of these missions is primarily to locate the center of the storm and measure central pressure and surface winds around the eye. (The U.S. Air Force Reserve’s 53rd Weather Reconnaissance Squadron also supports this mission with their WC-130J aircraft.) Information from both research and reconnaissance flights directly contribute to the safety of people living along and visiting the vulnerable Atlantic and Gulf coasts.

NOAA P-3s also participate in a wide variety of national and international meteorological and oceanographic research programs. Recently, these aircraft have been used in major studies on storms approaching the continents of Europe and North America to improve forecasts and study the effects of El Niño, atmospheric gases and aerosols over the North Atlantic, large-scale convective storm complexes in the Midwest, and winter storms battering U.S. Pacific coastal states.

G-IV Jet: Above and Around the Storm

NOAA’s Gulfstream IV-SP (G-IV) which can fly high, fast and far with a range of 4,000 nautical miles and a cruising altitude of 45,000 ft., paints a detailed picture of weather systems in the upper atmosphere surrounding developing hurricanes. The G-IV’s data also supplement the critical low altitude research data that are collected by NOAA’s P-3s. 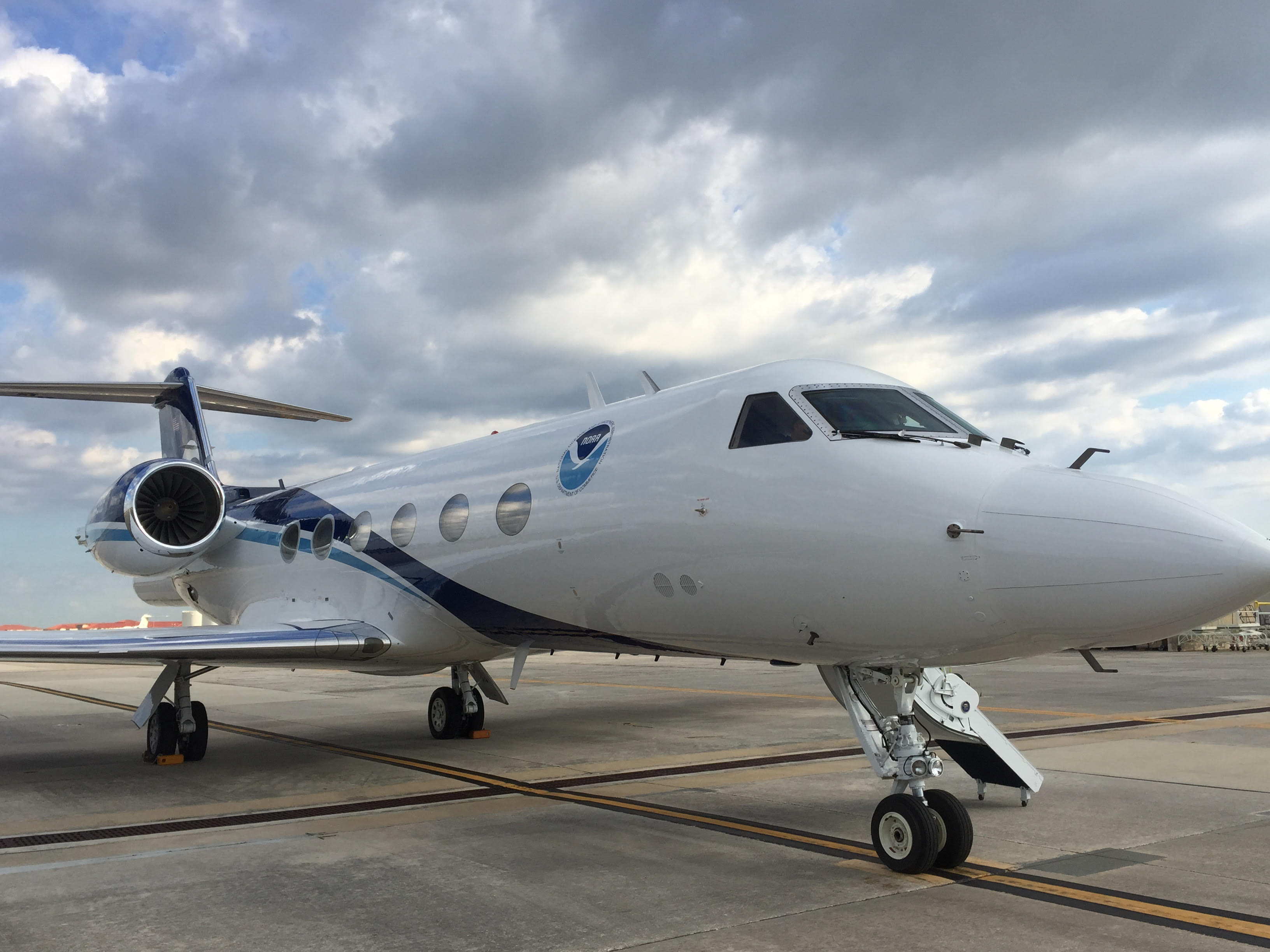 Since 1997, the G-IV has flown missions around nearly every Atlantic-based hurricane that has posed a potential threat to the United States. The jet’s mission covers thousands of square miles surrounding the hurricane, gathering vital high-altitude data with GPS dropwindsondes and tail Doppler radar that enables forecasters to maps the steering currents that influence the movement of hurricanes.

NOAA has also used the G-IV to gather important data upstream of winter storms and study “atmospheric rivers,” narrow bands of moisture that regularly form above the Pacific Ocean and flow towards North America’s west coast, drenching it in rain and packing it with snow.

The P-3s and G-IV are based at NOAA’s Aircraft Operations Center (AOC) that recently moved this year to Lakeland Linder Regional Airport in Lakeland, Florida. The AOC was previously at MacDill Air Force Base in Tampa, Florida. AOC is part of NOAA’s Office of Marine and Aviation Operations, which includes civilians as well as officers of the NOAA Corps, one of the nation’s seven uniformed services. NOAA Corps pilots and civilian flight engineers, meteorologists and electronic engineers are highly trained to operate in the kind of adverse weather conditions that keep other aircraft on the ground. Much of the scientific instrumentation flown aboard NOAA aircraft is designed, built, assembled, and calibrated by AOC’s Science and Engineering Division. During non-hurricane season months, the P-3s and G-IV are tailored by AOC engineers for use in other severe weather and atmospheric research programs, and flown by NOAA Corps pilots worldwide in a variety of weather conditions.