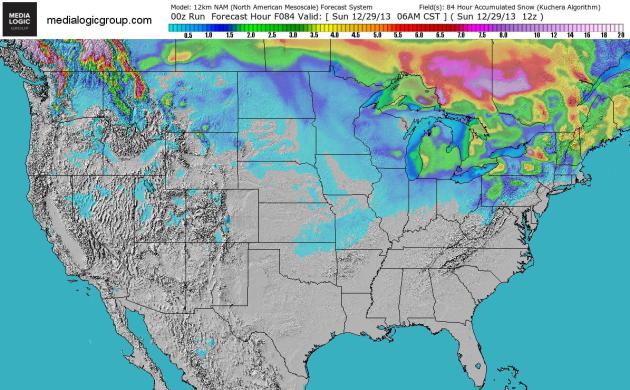 New Cameras Aid Snowflake Research. Here’s an excerpt of a fascinating article from The Salt Lake Tribune and The Register Guard: “They say every snowflake is unique. University of Utah researchers test that theory every time it snows at Alta Ski Area in Little Cottonwood Canyon. Multi-Angle Snowflake Cameras — constructed at the university and now being provided to other weather-related researchers — placed at Alta automatically kick on when snow starts to fall and record images until it stops. “Since April of 2011 we have obtained views of snowflakes that I don’t think have ever been seen before,” said Tim Garrett, a professor in the department of atmospheric sciences and lead researcher in the project. “We are seeing things that really are new and exciting. We are opening up scientific questions that we had not thought about before…”

* The site referenced above is here. 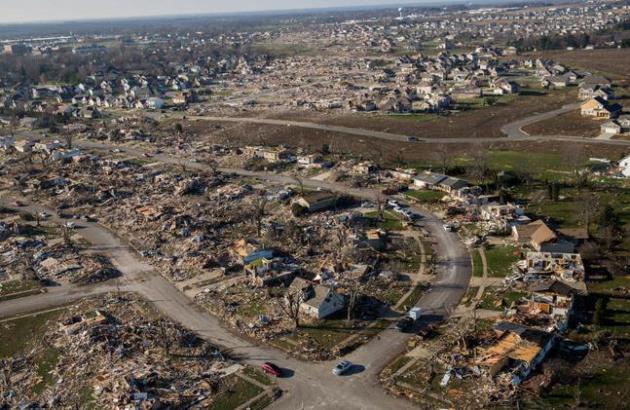 Illinois Tornado Survivors Say “It Never Goes Away”. This story, more than most I’ve read recently, captures the emotional and psychological toll of tornadoes and other forms of extreme, life-threatening weather. Here’s an excerpt from NBC Chicago: “…So when you have those dark moments, those bad times, you’re going to sense you’re stuck in this morass, and that’s when it’s going to seem like it’s worse. Then it’s going to start up again.” Now, the bad. “It never goes away. … They’ll never heal,” said Bobbe Marion, who in 1990 survived the most violent tornado to strike the Chicago metropolitan area. “They’re going to do the same thing we do. It gets nasty outside, and they’re going to be afraid. “How do you explain to a kid what happened? Your house is here one minute, and you come back and now the house is gone, and maybe the dog is gone, and all your toys are gone…” (File photo from November 17m, 2013 EF-4 tornado in Washington, Illinois: Chicago Tribune).

NASA Builds GPS-Based System For Detecting Natural Disasters. It’s all about the resolution and timeliness (latency) of raw data, and what you do with it. Here’s a clip from allvoices.com: “…Forecasters at NOAA National Weather Service offices in Oxnard and San Diego, California demonstrated the new technology in July, using it to track a summer monsoon rain affecting Southern California and issue more accurate and timely flash flood warnings. The new technology uses real-time information from GPS stations that have been upgraded with small, inexpensive seismic and meteorological sensors. Other real-world systems are integrating the new technology as well. For example, it is being used to make damage assessments for hospitals, bridges and other critical infrastructure that can be used in real time by emergency personnel, decision makers and first responders to help mitigate threats to public safety...” 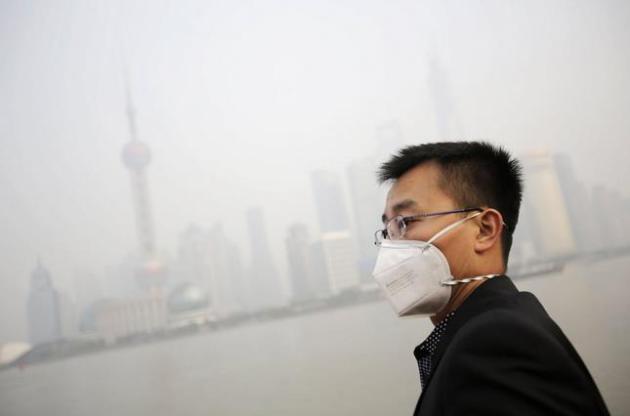 Heavy Pollution Enshrouds Northern China Including Capital. Bloomberg has an update on the record levels of smog gripping China – here’s the intro to a recent story: “Heavy pollution enveloped northern and central China today, prompting warnings for people to stay indoors as smog levels in some areas exceeded World Health Organization-recommended levels by 30 times. The concentration of PM2.5, fine air particulates that pose the greatest health risk, was 421 micrograms per cubic meter at 2 p.m. near Tiananmen Square in Beijing, compared with an average of 228 over the past 24 hours, the Beijing Municipal Environmental Monitoring Center said on its website. Levels of PM2.5 hit 795 in Xi’an and 740 in Zhengzhou. The WHO recommends 24-hour exposure to PM2.5 concentrations no higher than 25 micrograms per cubic meter…”

Photo credit above: “A tourist wearing a protective mask looks at buildings at the Bund under heavy haze in Shanghai, China, Friday, Dec. 20, 2013. Shanghai’s environmental protection bureau issued a “yellow” pollution warning this afternoon and said it was taking “emergency emission reduction” measures and recommended that children, the elderly and people suffering from heart disease or lung disease should stay indoors and cease outdoor exercises.” (AP Photo/Eugene Hoshiko). 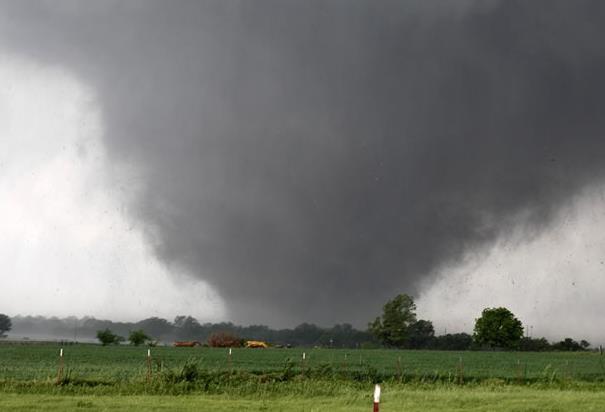 The 5 Top U.S. Weather Stories Of 2013. Here’s an excerpt of a list compiled by The Capital Weather Gang that (in my humble opinion) has the right idea: “In the United States, the major weather stories of 2013 are somewhat contradictory. One the one hand, several horrible weather events occurred, from violent tornadoes in Oklahoma to record wildfires in the West to “biblical flooding” in Colorado. But the year also brought the fewest tornadoes in recent memory and a largely absent Atlantic hurricane season. Overall, 2013 is likely to finish with 8 billion dollar weather disasters in the U.S., down from 11 in 2012 and 13 in 2011 but up from the 4 in 2010 and 6 in 2009. Here are my selections for 5 biggest weather events of 2013 in the United States, presented in no particular order…” 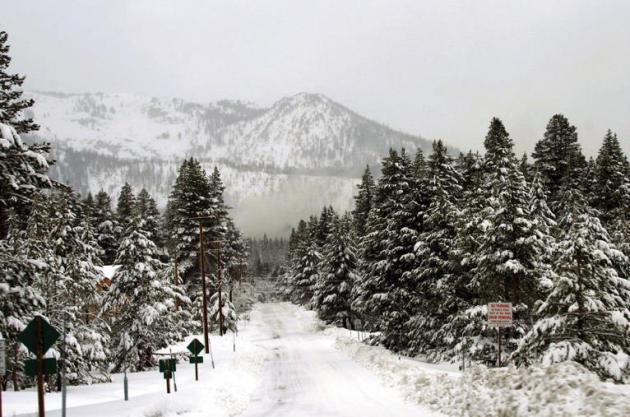 Dried Up And Maxed Out – California Tries To Make It Snow. 2013 has been the driest year on record for the state of California. Will cloud seeding help to squeeze out a few more inches over the Sierra Nevada? Governing.com has an interesting article; here’s an excerpt: “…Cloud seeding has been around for almost 70 years now, since Vincent Schaefer, a self-taught chemist, dumped six pounds of dry ice into the clouds over the Berkshire Mountains in Massachusetts in 1946, making them snow. The experiment led to speculation that cloud seeding could fight drought, control storms, reduce hail and quench forest fires. Indeed, today about 10 states, mostly in the West, have cloud-seeding operations to combat such conditions. In Arizona, California, Colorado, Idaho, Nevada, Utah and Wyoming, cloud-seeders are hired to increase the snowpack. In Kansas and Texas, they work to induce rain, and in North Dakota, they induce rain before the clouds can produce crop-damaging hail…” 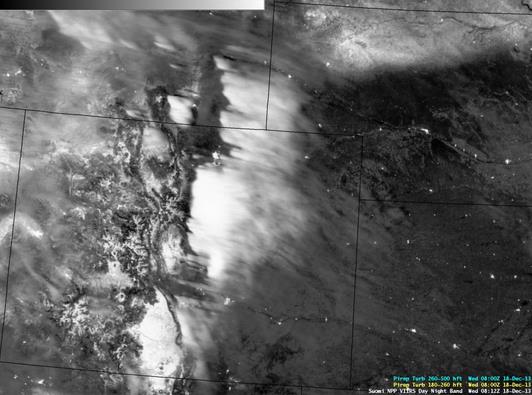 A Moonlit Shield Of Clouds, As Seen From Space. Here’s a snippet of an interesting image and explanation from discovermagazine.com: “On Dec. 18th, 2013, an almost full moon enabled the Suomi NPP satellite to capture this unusual visible-light image of a spectacular cloud formation along the eastern slope of the Rocky Mountains in Colorado and Wyoming. You can tell it’s nighttime from the points of light that are most clearly visible in the right portion of the image. These are towns out on the high plains of Nebraska and Kansas. The white stuff that seems to streak off the mountaintops comprise what’s known as orographic cirrus clouds…”

Image credit above: “An orographic cirrus cloud formation on the eastern side of the Rocky Mountains, as seen at night by the Suomi NPP satellite on 12/18/13.” (Source: CIMSS Satellite Blog).

Snow: Every Budgeters Worst Nightmare. Keeping roads clear of snow and ice is non-trivial, and expensive. Here’s a clip from an article at Governing Magazine: “…Predicting just how much a local government will need to spend for the upcoming winter is only a best guess. Costs vary widely from year to year, depending not only on the severity of the weather, but where on the calendar storms fall and even the time of day a storm hits. The city of Minneapolis attempts to project its snow and ice removal costs by looking at averages over the previous three to five years. For fiscal year 2013, the city budgeted about $10 million. In recent years, though, the total bill has ranged from slightly more than $7 million all the way up to $12 million. “We try and budget for an average year,” says Deputy Public Works Director Heidi Hamilton. “But there’s never an average year...” (photo credit: Jessica Hill, AP). 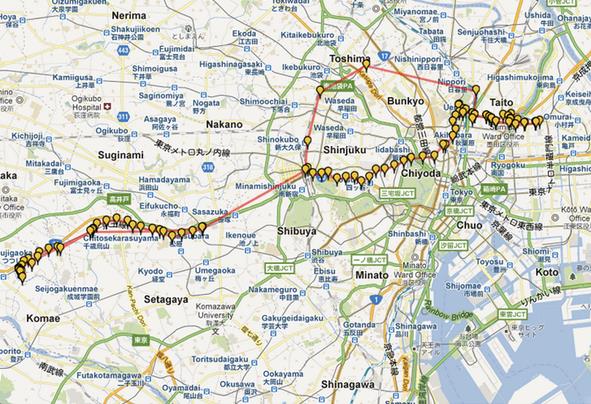 Weather Effects On The Patterns Of People’s Everyday Activities: A Study Using GPS-Traces Of Mobile Phone Users. Hey, you could have just asked the NSA, right? Here’s a clip from an interesting study that uses cellular data to track how changes in weather affect our behavior and movement – derived from the records of 31,855 mobile phone users, courtesy of PLOS ONE: “…Our analysis of 31,855 mobile phone users allowed us to infer that people were more likely to stay longer at eateries or food outlets, and (to a lesser degree) at retail or shopping areas when the weather is very cold or when conditions are calm (non-windy). When compared to people’s regular activity patterns, certain weather conditions affected people’s movements and activities noticeably at different times of the day. On cold days, people’s activities were found to be more diverse especially after 10AM, showing greatest variations between 2PM and 6PM. A similar trend is observed between 10AM and midnight on rainy days, with people’s activities found to be most diverse on days with heaviest rainfalls or on days when the wind speed was stronger than 4 km/h, especially between 10AM–1AM….”

Americans Are Buying Less Electricity. That’s A Big Problem For Utilities. Here’s a clip from an article at The Washington Post: “Something very unusual has been happening to the U.S. electricity sector over the past three years. The U.S. economy keeps growing. People are buying bigger homes and plugging in ever more electronic gadgets. And yet power companies have been selling less and less electricity since 2011. That may not look like a particularly steep drop, but it’s a massive break from the past. Ever since World War II, electricity sales in the United States have, for the most part, gone up and up and up…” 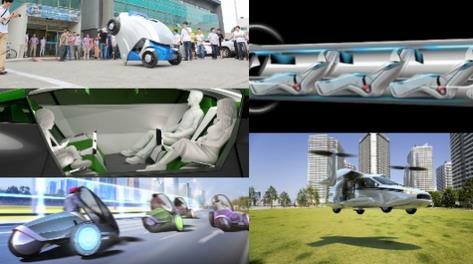 Concept Cars That Could Change Transportation As We Know It. Gizmag has an intriguing article about how we may be getting around in the not-too-distant future; here’s an excerpt: “The average concept car experiments with styling, technology and packaging to explore potential new ideas. Some concept cars take it a few steps further, not just rethinking the car but redefining what a car is and exploring ideas that could completely revolutionize the way we get from point A to point B. From vehicles that drive themselves, to cars that fly and fold, some of 2013’s most interesting concept cars provided a lens into a very different future…” 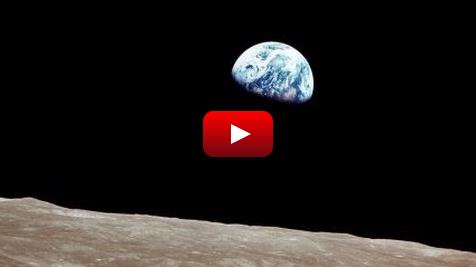 NASA’s Christmas Eve “Earthrise” Revisited And Revisualized. Andrew Revkin has an interesting post (and great visuals) at The New York Times Dot Earth; here’s an excerpt: “More clearly than ever, the sequence shows how — with all NASA’s planning and precision — the prospect of witnessing, and recording, an “Earthrise” was completely unanticipated. The full visualization is here...” 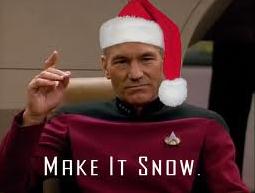 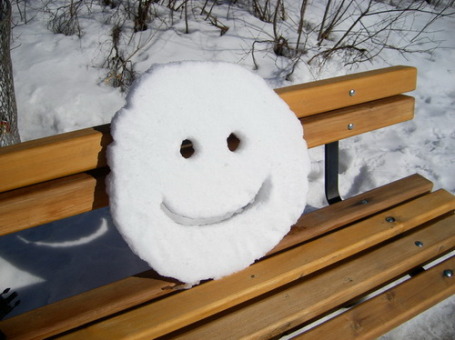