Frost possible in the Twin Cities, Green Bay, Milwaukee, even Chicago by next weekend, coming nearly 2-3 weeks earlier than usual. Details below.

Flakes Next Week? O.K. I hesitated even sharing this, because I’m not convinced f-f-f-flurries will reach as far south as MSP. But a couple of the longer-range models are hinting at a touch of snow late Monday night or Tuesday morning. Wouldn’t that be fun? From mid-80s Sunday to mid and upper 30s just 36 hours later…a 50-degree temperature freefall? The way this year is going nothing would surprise me, not even flurries on September 18. 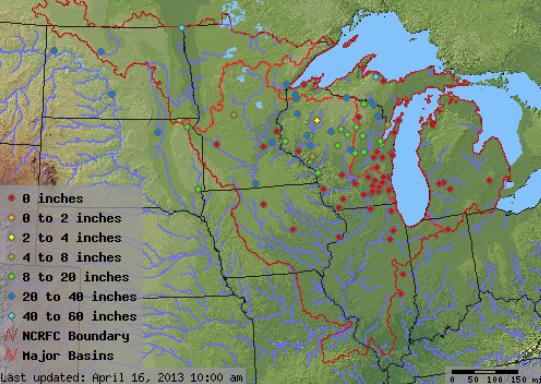 Frosty Possibilities. It seems hard to comprehend, with temperatures forecast to top 80 today and Sunday, but there is a very good chance of a frost for much of the metro by next weekend, coming roughly 2 weeks ahead of schedule. Here’s more information from Planalytics:

“Starting on Tuesday, consumers east of the Rockies will be reaching for a fleece jacket during the day and an extra blanket overnight.  While some areas enjoyed cooler overnight conditions this week, next Tuesday and Wednesday (September 18th & 19th) is expected to bring a 25 to 30°F decrease for both day time and overnight temperatures compared to recent weeks across the Northern Plains and Western Great Lakes.  Frost is likely across these regions, including the major population areas of Minneapolis, Green Bay, Madison, and Milwaukee.” 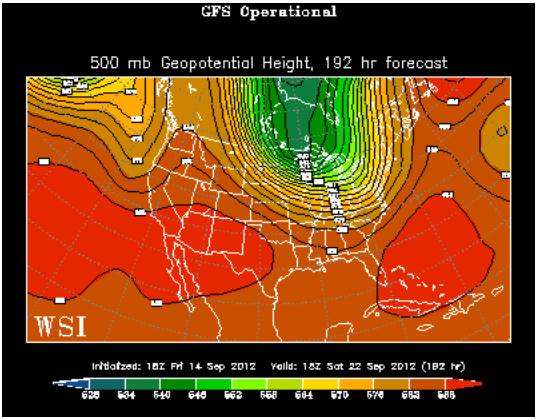 One Week From Today: September 22 or October 22? The GFS forecast for 500 mb winds (18,000 feet) for next Saturday, September 22, shows upper level winds howling from the north/northwest, plunging unusually cold air south of the border. If this forecast verifies (likely) we’ll see our first frost within 6-8 days. The good news: the same GFS model shows a rapid warming the last week of September, temperatures climbing back into the 60s, possibly 70s. Map above courtesy of WSI.

We Are #1 (For Heat). A high of 134 F. on July 10, 1913 at Greenland Ranch (Death Valley), California, USA now qualifies as the hottest (official) temperature ever recorded on the face of the Earth. The previous (Libyan) record of 136 F was just ruled invalid by the WMO. From NOAA: “Since 1922, the record for highest temperature recorded at the earth’s surface was held at El Azizia, Libya. A temperature of 136.4 degrees was recorded there on September 13, 1922. After review, the World Meteorological Association has deemed this record invalid. Their decision was due to various reasons including problematic instrumentation, a new and inexperienced observer, and several other issues. The record now falls to the American record at Furnace Creek in Death Valley, California. The temperature there was recorded at 134 degrees on July 10, 1913.”

“Nadine” becomes the 8th hurricane of 2012 in the Atlantic. Iowa Environmental Mesonet. 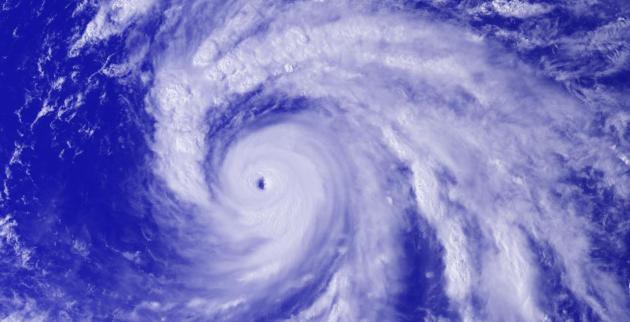 Bird Migration Forecasts Early Winter. Maybe the birds know something we don’t…? Here’s an excerpt from sfgate.com: “There’s a saying, “Birds never lie.” If so, the best weather forecaster in the West, the migratory sandhill crane, is predicting an early winter with plenty of rain and snow. Over the years, the timing of the migration of sandhill cranes south to the San Joaquin Valley has predicted winter weather, both wet and dry. Early migrations have meant big winters. Late migrations, the opposite. “I think 2012 sets a record for earliest arrival,” said Gary Ivey, the International Crane Foundation’s Western Conversation Manager. This fall’s verified migration started  August 25 when 10 sandhill cranes were sighted in northern San Joaquin County by a birdwatching group guided by Esther Milnes-Schmierer, a docent for the Department of Fish and Game. In past years, the giant sandhill cranes have first arrived in mid-September.”

Crop Update. Dr. Mark Seeley includes an interesting update on crop conditions in this week’s Minnesota WeatherTalk: “A national drought perspective was provided this week by Brad Rippey of the USDA World Agricultural Outlook Board, highlighting the major features of the USA drought. Excerpts include:

Crops and cattle in drought have begun to rise again. Overall, drought has shifted toward the north and west in recent weeks.

– U.S. corn in drought stands at 84%, up a percentage point from a week ago. The corn harvest is underway, 15% complete nationally by September 9.
– Soybeans in drought also rose a point – to 81%. The soybean harvest is underway in a few areas, 4% complete nationally by September 9.
– Hay in drought rose 3 points to 66%, tying the high set on July 17 and 24.
– Cattle in drought reached a new high, rising 2 points to 74%.
– Winter wheat in drought is added this week, as planting is underway (4% complete). Nearly three-quarters (74%) of the winter wheat area is in drought.
– Due to expansion of drought in the nation’s mid-section, contiguous U.S. drought coverage reached a record-high 64.16% on September 11. The former record of 63.86% had been set on July 24.” 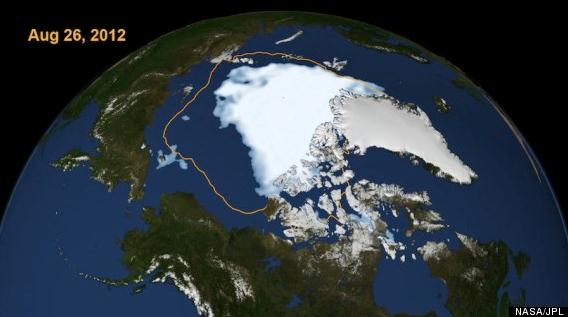 Arctic Ice Melt Could Mean More Extreme Winters For U.S. And Europe. What’s happening at the top of the world will probably have a ripple effect on winter weather from the USA to Europe and Asia. It’s counterintuitive, but a warmer Arctic means a smaller north-south temperature contrast (what meteorologists call “baroclinicity”), which in turn leads to lower jet stream winds. So what? A slower jet increases the potential for blocking patterns, where weather patterns can stall for days, even weeks at a time. Weather is more apt to fall into a rut. It may be a snowy rut, or a mild rut – too early to say at this point in time, but there’s little doubt that record Arctic ice loss will have a domino effect. Here’s an excerpt of a good explanation from Climate Nexus, Climate Central and Huffington Post: “The record loss of Arctic sea ice this summer will echo throughout the weather patterns affecting the U.S. and Europe this winter, climate scientists said on Wednesday, since added heat in the Arctic influences the jet stream and may make extreme weather and climate events more likely. The “astounding” loss of sea ice this year is adding a huge amount of heat to the Arctic Ocean and the atmosphere, said Jennifer Francis, an atmospheric scientist at Rutgers University in New Jersey. “It’s like having a new energy source for the atmosphere.” Francis was one of three scientists on a conference call Wednesday to discuss the ramifications of sea ice loss for areas outside the Arctic. The call was hosted by Climate Nexus.”

Image credit above: “The extent of Arctic sea ice on Aug. 26, 2012, the day the sea ice dipped to its smallest extent ever recorded in more than three decades of satellite measurements. The line on the image shows the average minimum extent from the period covering 1979-2010.” Credit: NASA/JPL. 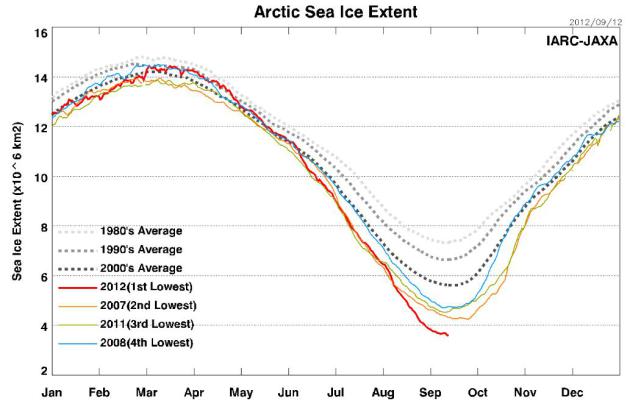 Latest Trends. Arctic ice loss should be reaching a minimum in the next 1-2 weeks, leveling out after record ice loss. The previous record ice loss was 2007. Ice coverage and volume is roughly 20% less than it was 5 years ago.

Hottest Spot on Earth? USA, Not Libya. Here’s an excerpt of a post from the WMO, the World Meteorological Organization: “A World Meteorological Organization panel has concluded that the all-time heat record held for exactly 90 years by El Azizia in Libya is invalid because of an error in recording the temperature. The announcement follows a danger-fraught investigation during the 2011 Libyan revolution. Death Valley National Park in California, USA, now officially holds the title of the world’s hottest place – as symbolic for meteorologists as Mt. Everest is for geographers….Consequently, the WMO assessment is that the official highest recorded surface temperature of 56.7°C (134°F) was measured on 10 July 1913 at Greenland Ranch (Death Valley), California, USA.  Full details of the assessment are given in the on-line issue of the Bulletin of the American Meteorological Society (http://dx.doi.org/10.1175/BAMS-D-12-00093.1)” 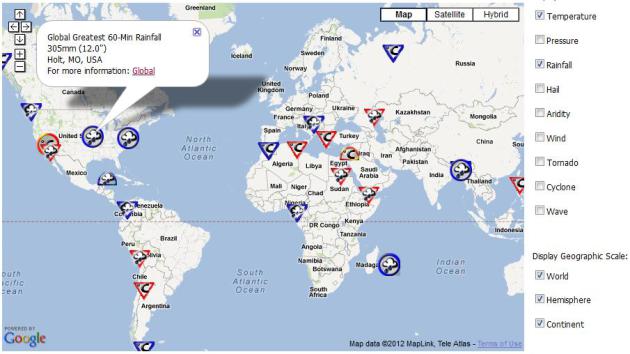 World Weather – Climate Extremes Archive. Here’s a great bit of trivia for your next party. “Did you know the world record for rainfall in a 60 minute period is 12″ at Holt, Missouri?” Crickets. O.K. Maybe you don’t want to publicize this (geeky) information, but other weather enthusiasts may find this interesting. Arizona State University has an interactive global map that shows world records.

Speaking Of Super-Typhoons. I didn’t realize this, but the world record for surface wind gusts is 253 mph, set in 1996 at Barrow Island, Australia. Seems like that should have been a “Category 6”. Source: Arizona State University and WMO. 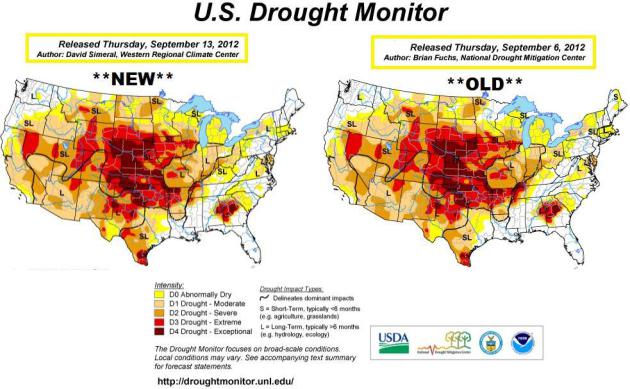 Drought of 2012: Status Quo. Not much change in the U.S. Drought Monitor – the driest conditions from the Midwest into the Central and Southern Plains, a pocket of extreme/exceptional drought over eastern Alabama and Georgia.

Weekend Weather Trends. Here is the latest 84-hour NAM model, showing a fairly nice spell of moderate weather over the northern tier states, a weakening cool front pushing showers into the Northeast Friday night, skies clearing over the weekend across New England. The best chance of heavy showers and T-storms extending from Texas along the Gulf Coast; a growing chance of coastal showers for the Carolinas by Sunday. A stronger cold front pushes showers into Minnesota and the Upper Midwest late Sunday and Monday of next week. 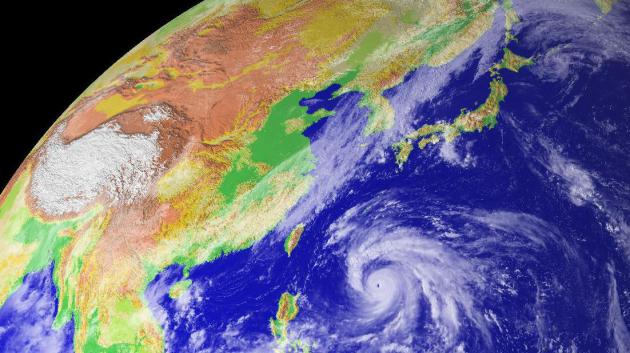 Typhoon Sanba Headed For Okinawa, South Korea. Details from CNN: “A typhoon slinging fierce winds moved north Saturday toward the Japanese island of Okinawa, on a track to hit the Korean Peninsula, where dozens of people were killed by a big storm last month. Tropical cyclone Sanba had winds of 232 kilometers per hour (144 mph), said CNNI Weather Anchor Jenny Harrison. “One expects and assumes that people are beginning to already take serious precautions as to the arrival of this very strong typhoon,” she said. She predicted that storm surge could prove to be a problem for islanders. “It’s a large storm and it’s going to have a fairly wide-reaching effect,” she said. “Okinawa is pretty much in the path of this storm.”

Details from Digital Typhoon: “Typhoon SANBA was formed in Caroline Islands. Palau is now within the gale-force wind area. The typhoon is forecast to move northward off the east coast of Phillipines, which is known to be a favorable area for typhoon intensification, so we need to keep alert on the development of the typhoon.” High-resolution imagery here. 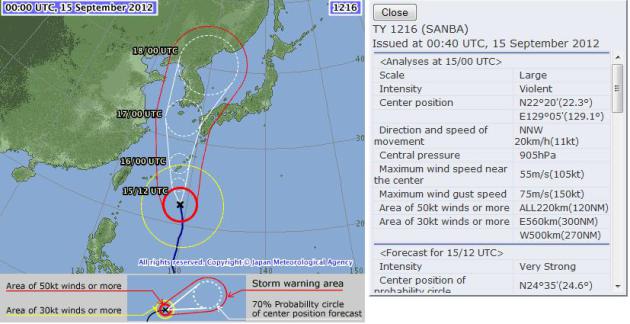 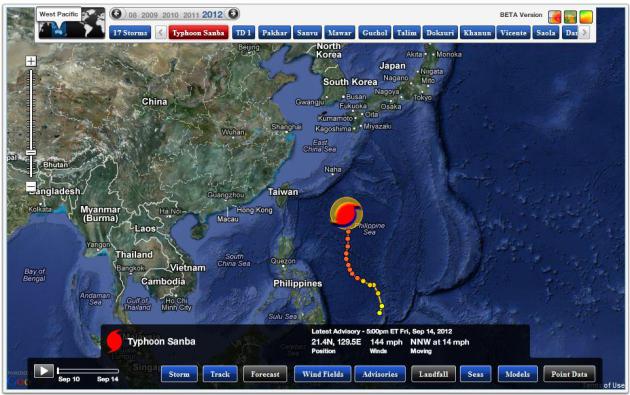 Hurricane Alley. Typhoons (same phenomenon as hurricanes) tend to be bigger and stronger in the western Pacific than in the Atlantic, about 40% larger, on average, according to the AMS. Why? The Pacific is considerably bigger than the Atlantic, a longer, warmer “fetch” of water for these storms to get going and intensify into monsters. The map above from Ham Weather shows where “Sanba” has been – it looks like it will spare the Philippines and Taiwan. South Korea and far western Japan may not be quite so lucky. Sanba may weaken slightly as it pushes north, moving over cooler ocean water. 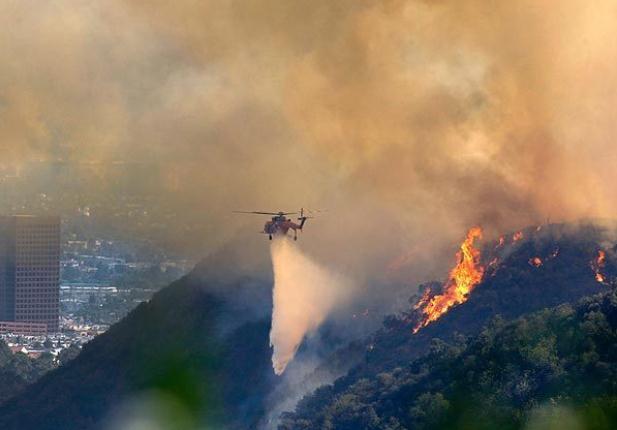 Brushfires Snarl 405 In L.A. Los Angeles has been sizzling, and unusually, hot, dry Santa Ana winds are fanning brushfires. Details (and photo above) from The Los Angeles Times: “The northbound Getty Center offramp of the 405 Freeway has been ordered shut down at the height of rush hour as emergency crews scramble to fight a growing brushfire in the Sepulveda Pass, just east of the freeway. The California Highway Patrol has also closed Sepulveda Boulevard between Moraga Drive and the Getty Center. The center itself was closed and evacuated earlier as a precaution.”