“Studies in Europe and Japan have found that leaves are changing color later that usual, and new research by U.S. scientists is coming up with similar results…” – from a story at northjersey.com below. 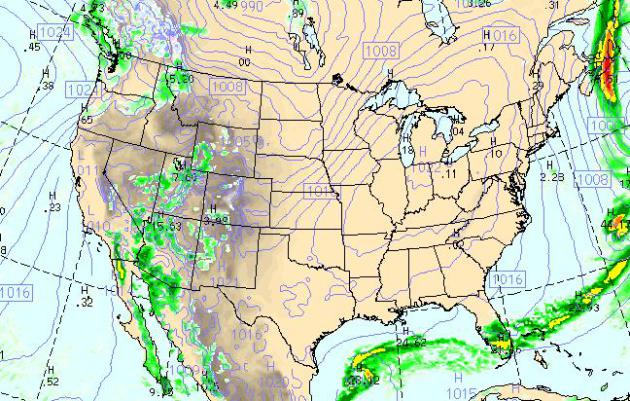 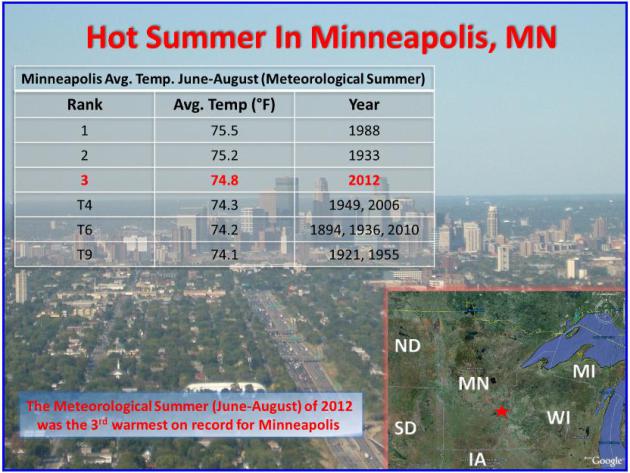 Third Hottest Meteorological Summer On Record. According to NOAA, just a fraction of a degree F. cooler than 1988 and 1933, 2012 was a sizzler. Nationwide July was the hottest month in recorded U.S. history. So what kind of winters followed the steamy summers of 1933 and 1988?

Twin Cities Winter Snowfalls. The Winter of 1933-34 brought only 25.6″ of snow, while the winter following the blazing summer of 1988 saw 70.1″. I suspect this upcoming winter will fall somewhere in-between. How’s that for going out on a limb. 120 years of snowfall records for KMSP from the National Weather Service. 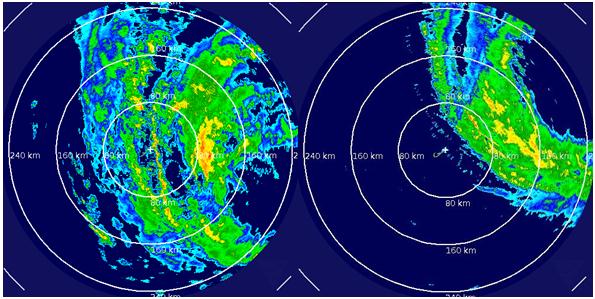 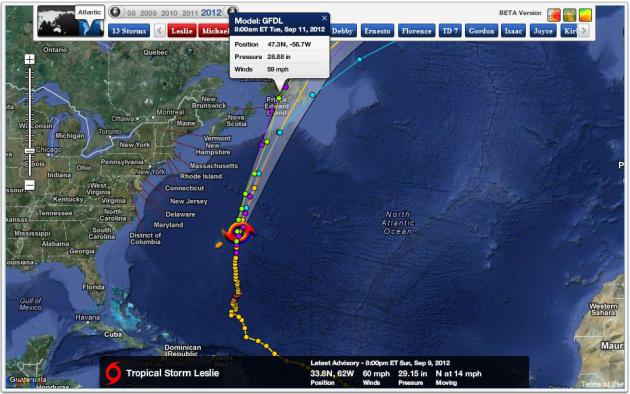 Leslie’s Track. Tropical Storm Leslie is still…a tropical storm. The predicted strengthening hasn’t taken place, and at this point, with increasing wind shear, Leslie may not re-strengthen to hurricane status. The storm is forecast to reach Prince Edward Island, Canada by late Tuesday as a tropical storm. Map: Ham Weather. 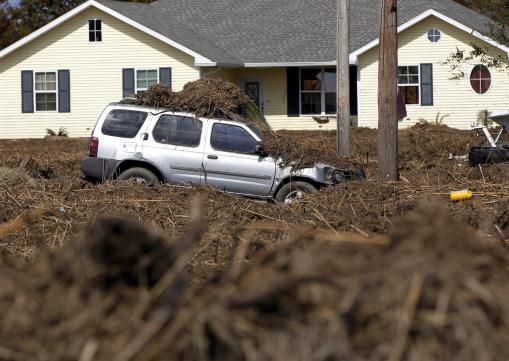 Hurricane Isaac Was The “Perfect” Storm. Coastal residents need to focus more on the forward speed of a storm, vs. the category (wind speed). A stalled Category 1 can be far more damaging, a much more prodigous rain-maker, than a fast-moving Category 3. Details from the shreveporttimes.com: “Exhausted and overwhelmed, Plaquemines Parish residents on both sides of the Mississippi River were struggling last week to come to grips with Isaac’s aftermath — and the lengthy recovery ahead. Hundreds can’t live in their homes. Of those that can, most don’t have electricity. Communities are littered with carrion, including the carcasses of as many as 1,000 cattle.The parish, split into east and west banks by the Mississippi, bore the brunt of the hurricane’s fury. The storm surge overwhelmed “back” levees, rushed into communities and quickly filled homes with as much as 17 feet of water.” 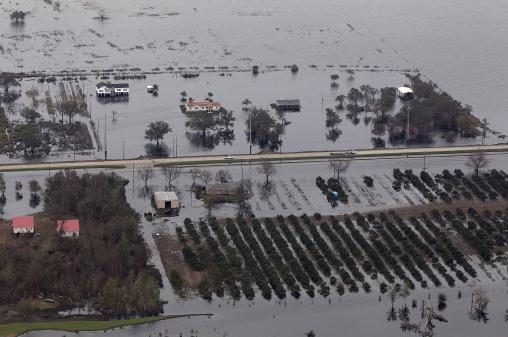 Hurricane Isaac Was No Katrina, But The Stubborn Storm Is This Generation’s “Betsy”. As I’ve been saying for weeks now, the Saffir Simpson Scale (1-5 rating for hurricanes) can be very misleading. Some of the worst flooding and loss of life has come from Category 1’s and tropical storms. An interesting story from NOLA.com; here’s an excerpt: “It has taken a while to sink in, but Hurricane Isaac, which New Orleans sized up as a minimal hurricane not worth running from, has turned out to be the region’s new Hurricane Betsy, the storm that two generations before Hurricane Katrina was regarded as the local gold standard for punishing storms. Katrina, of course, is in a class by itself. But before Katrina. it was Betsy that dominated memories as a storm of life-changing power. Betsy struck 47 years ago on Monday, killing 81 people and flooding parts of Gentilly, eastern New Orleans, Arabi and Plaquemines Parish.” 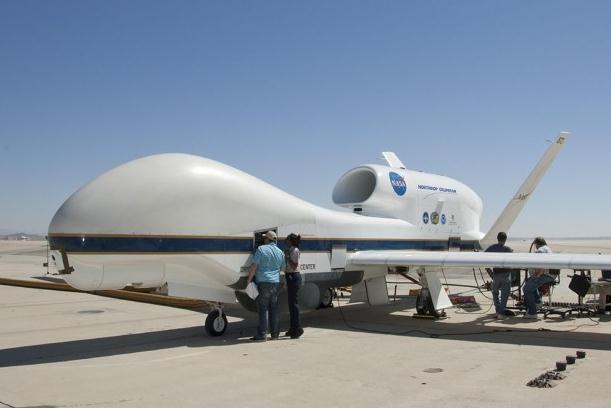 NASA Flies Global Hawk Over Hurricane Leslie. This is new – using drones to prove hurricanes and tropical storms, military technology trickling down into the private sector to get information that would be difficult or impossible with conventional Hurricane Hunter aircraft and “dropsondes”, tiny, parachute-like instruments dropped into hurricanes. More details from redorbit.com: “NASA has launched the part of its Hurricane and Severe Storm Sentinel (HS3) mission designed to study hurricanes in the field this week with the program’s first flight of an unmanned Global Hawk aircraft over Hurricane Leslie in the Atlantic Ocean. The research drone took off from NASA’s Dryden Flight Research Center at Edwards Air Force Base in California Thursday and landed at the federal agency’s Wallops Flight Facility on Wallops Island, Va., on Friday after spending 10 hours in the air collecting data on the Category 1 storm. Last week’s flight is the first of two scheduled flights for the program this month. The first Global Hawk carried a payload of instruments dedicated to measuring the environment during the storm.” 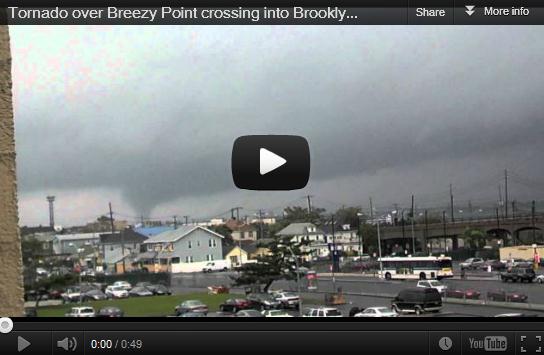 A Look At Tornadoes That Have Hit Major Cities. Here’s a timely article from The Associated Press and knoe.com: “Two tornadoes touched down at the edge of New York City on Saturday. No serious injuries were reported. Once exceedingly rare in New York, tornadoes have occurred with regularity in recent years. A small tornado uprooted trees on Long Island last month. In 2011, a fast-moving storm during the city’s evening rush hour spawned two destructive tornadoes and a fierce macroburst with wind speeds up to 125 mph that barreled across the city’s Brooklyn and Queens sections. A woman in a car who had just swapped seats with her husband was killed. A September storm in 2010 spawned two tornadoes that knocked down thousands of trees and blew off a few rooftops in Brooklyn and Queens. A small tornado struck the same year in the Bronx. In 2007, a more powerful tornado damaged homes in Brooklyn and Staten Island…” 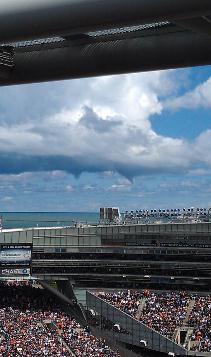 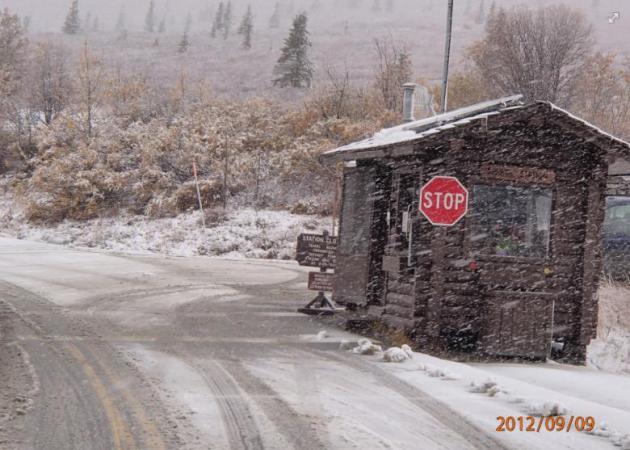 First Flakes. Here’s a photo from Denali National Park and Preserve: “A view from the Savage River check station during today’s snowy weather.” 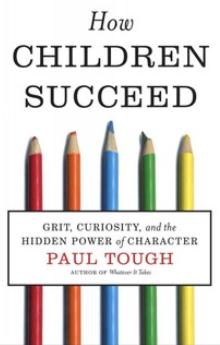 “Children Succeed” With Character, Not Test Scores. Here’s an excerpt from an NPR story that caught my eye: “A child’s success can’t be measured in IQ scores, standardized tests or vocabulary quizzes, says author Paul Tough. Success, he argues, is about how young people build character. Tough explores his idea in his new book, “How Children Succeed: Grit, Curiosity and the Hidden Power of Character.” “For some people, (the) path to college is so easy that they can get out into life and they’ve never really been challenged,” he tells NPR’s David Greene. “I think they get into their 20s and 30s and they really feel lost – they feel like they never had those character-building experiences as adolescents, as kids, that really make a difference when they get to adulthood.”

Minnesota’s pioneers braved the elements without the luxuries of central air, Thinsulate and heated car seats. They tolerated blizzards, tornadoes and floods, but anecdotal evidence suggests that the source of greatest dread was fire.

As many as half of all brushfires a century ago started from errant sparks along the railroads; an estimated 800 people may have perished in one horrific blaze in Hinckley, in 1894.

The risk of deadly conflagrations has come down, thanks to military-precision air drops of fire retardant and bulldozer brigades, but some threat remains.

A combination of deepening drought, gusty winds and tinder-dry humidity has forecasters concerned, especially tomorrow, when highs top 90F, for the 31st day this year. A Red Flag Warning for southwest Minnesota means fires may spread rapidly, with little warning.

We cool off by midweek, enough rain to settle the dust late Wednesday & Thursday. It won’t be enough; the biggest puddles staying south & east of MSP.

Lukewarm 70s return next weekend. Soak it up because long range models shows a REAL cold front next week. The sun is as high in the sky as it was March 31.

Yep, almost time to dig out the jackets.

* photo above courtesy of the DNR. 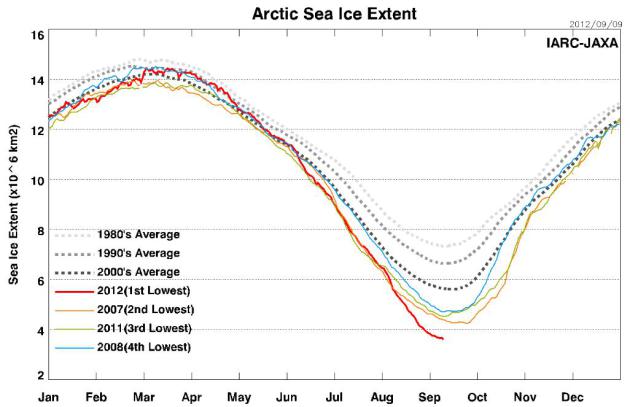 Arctic Sea Ice Falls To Record Low. Global Warming? No, I’m sure it’s a coincidence that the 4 lowest Arctic ice measurements have all taken place since 2007. Here’s a clip from The Christian Science Monitor: “Earth’s icy skull cap, floating atop the Arctic Ocean, has reached its lowest summer extent since satellites first began keep in track in 1979, and by some estimates its lowest reach in nearly 1,500 years. As of Sept. 7, the Arctic Ocean’s expanse of summer ice this month spanned less than 1.54 million square miles, nearly six times the size of Texas and some 45 percent less than for the average for the same month through the 1980s and ’90s, according to the National Snow and Ice Data Center in Boulder, Colo. And the ice is still retreating; the summer melt season typically ends in mid to late September.”
* graph above courtesy of the Arctic-Sea Ice Monitor. Japan Aerospace Exploration Agency, Earth Observation Research Center. 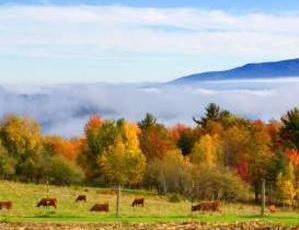 Autumn’s Glow Put At Risk By Climate Change. NorthJersey.com has the story; here’s an excerpt: “Climatologists and phenologists — those who study the effects of seasonal changes on plants and animals — are increasingly concerned about the effects of rising temperatures and erratic weather patterns on fall foliage….

Studies in Europe and Japan have found that leaves are changing color later that usual, and new research by U.S. scientists is coming up with similar results: 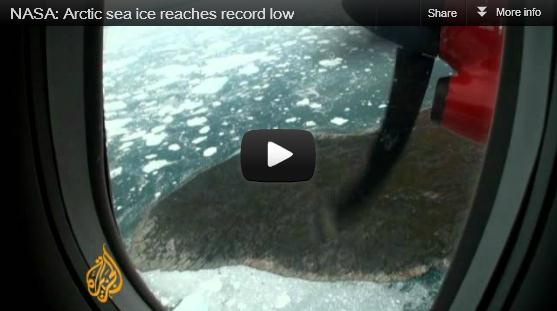 Pay No Attention To The Elephant: The Conventions And The Climate. Huffington Post has the story – here’s a snippet:  “Let’s see now. What has happened in the last two weeks? Both major political parties held their quadrennial national conventions, each of which was disrupted by weather unanticipated by convention planners. Neither party emphasized climate change. Nor did the hordes of media types in attendance, who essentially ignored it in favor of the usual back-and-forth. And, oh yes, the once deeply ice-capped Arctic Sea turned into a giant slushy at the top of the world. At least President Barack Obama mentioned climate change as a serious issue. Which is not to say that Mitt Romney didn’t mention it, too. As a joke.”

Image credit above: “NASA says that Arctic Sea ice has reached a record low that is going lower.” 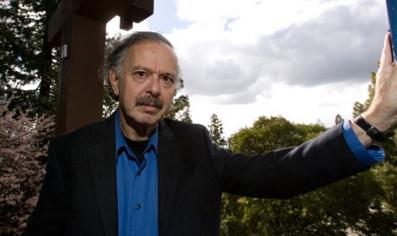 The Last Climate Change Skeptic. Here’s a clip from thecanadian.org: “If Dr. Richard Muller, a professor of physics from the University of California, Berkeley, is not the last of the global climate change skeptics, he should be. For years he has been one of the highest profile critics of the procedures and conclusions of the UN’s Intergovernmental Panel on Climate Change (IPCC), arguing that its current analysis of evidence is too flawed to definitively conclude a relationship between anthropogenic emissions of carbon dioxide and rising global temperatures. He has since changed his mind, offering an opinion piece in The New York Times (July 28/12) describing his “total turnaround” on the subject and defining himself now as “a converted skeptic”. His transformation is worth exploring.”
Photo credit above: Dr. Richard Muller (Guardian photo).

Is Global Warming Heating Texas? Here’s an excerpt from the Texas State Climatologist at Austin’s statesman.com: “Extreme weather, such as droughts, floods, tornadoes, and hurricanes, has long been a subject of intense scientific research. Recently, though, the study of extreme weather has taken a different turn. People are wondering whether extreme weather is becoming more frequent or intense, and whether specific events might be linked to a long-term global rise in temperatures. Science is responding to this demand for information, and ever-increasing numbers of research studies are addressing this issue. To confidently answer such questions, you need two things: a clear trend in the data and a sound physical reason. Without the sound explanation, a trend might be random chance. Without the trend, the reason might be wrong because it left out some important factor.”