Happy Tuesday! I have to say that if the nation hasn’t been busy, it’s been very quiet these past few months. The good news for this busy travel week is that things should stay calm for most of the nation. About the only trouble spots we are looking at the next few days, especially for Wednesday, should be the northwest where system after system continues to move in. 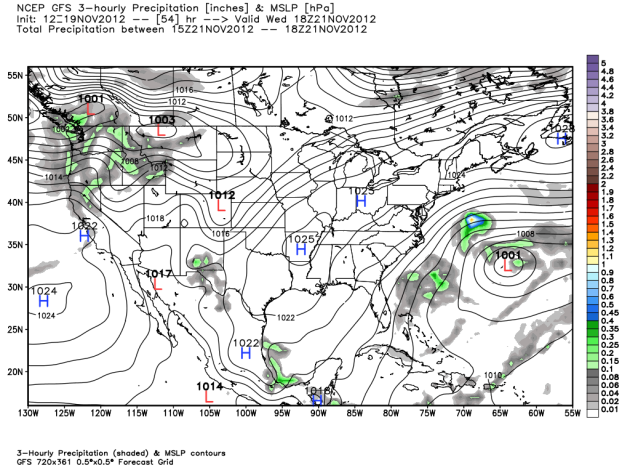 Here’s the midday map for Wednesday, showing most of the country calm and dry for the busy travel day. If you are looking to travel to the northwest, you might want to prepare for delays as rain and snow continues in the area. If you are flying, besides delays make sure you plan on the possibility of turbulence as you fly in the region. 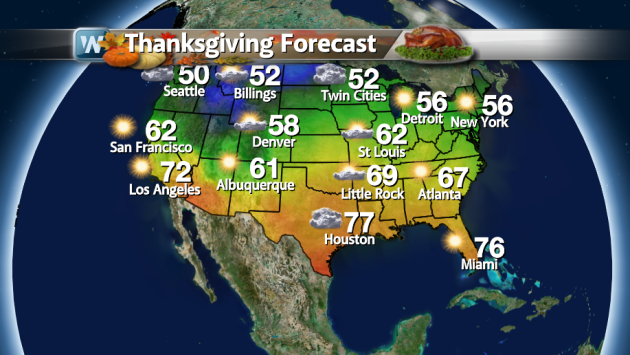 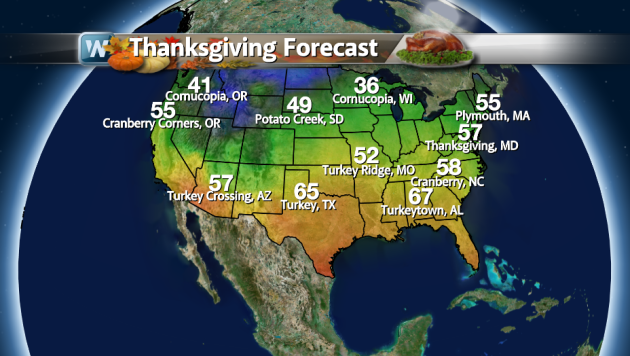 Thanksgiving looks nice and warm across much of the country. Here is the forecast for the bigger cities as well as some Thanksgiving-themed areas across the nation. (Note: Cornucopia, WI will be about 10 degrees warmer than the graphic shows — sorry!) 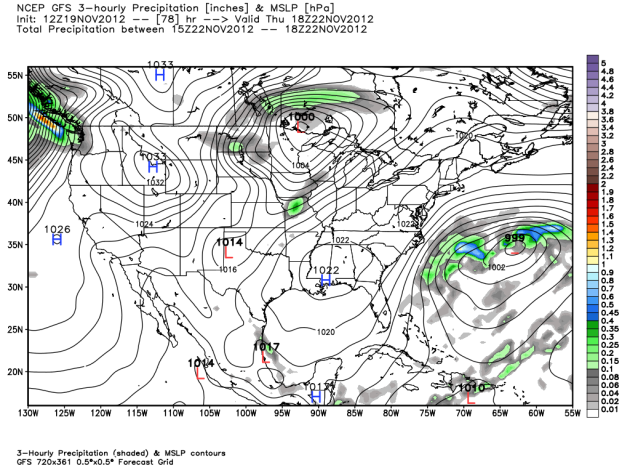 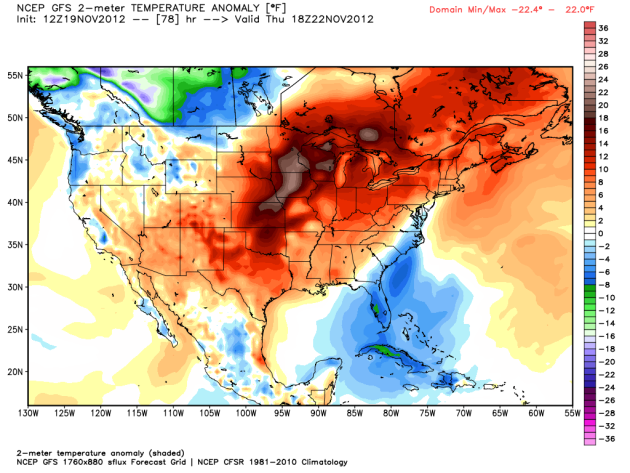 Quiet skies will continue to reign across the country, as is evident by the little precipitation expected. There could be a shower in the Dakotas and the Central Plains, but everything else looks good! Temperatures look to be far above normal in the central part of the country. 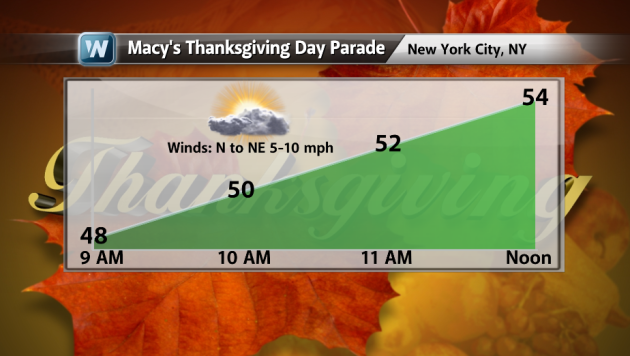 Forecast for the Macy’s Parade in New York looks to be great! 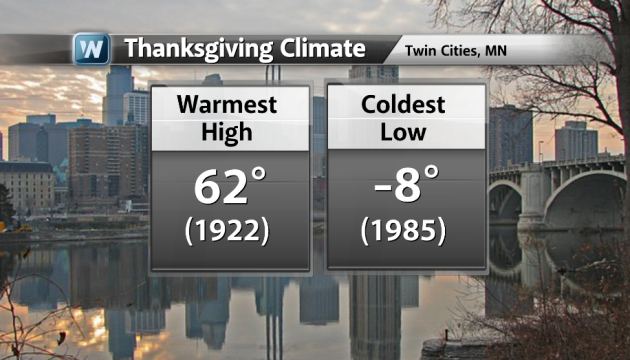 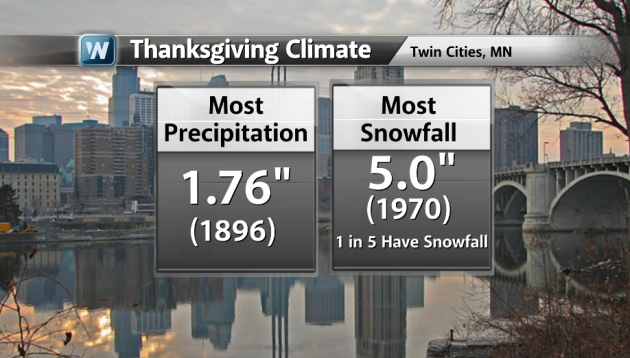 Let’s take a look at some climatology for some areas across the country. In the Twin Cities, about 1 in 3 Thanksgivings have snow on the ground. That is definitely not the case this year. Last year saw the 4th warmest Thanksgiving on record for the Twin Cities, and this year will be in the same ballpark, if not challenging the warmest! 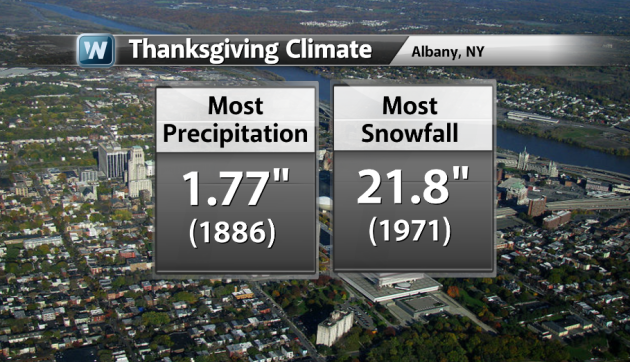 I found the Albany, NY snow total interesting. Over 20″ on Thanksgiving?!? I can’t even imagine that… And I was 1 year old when the Halloween Blizzard hit the Twin Cities! 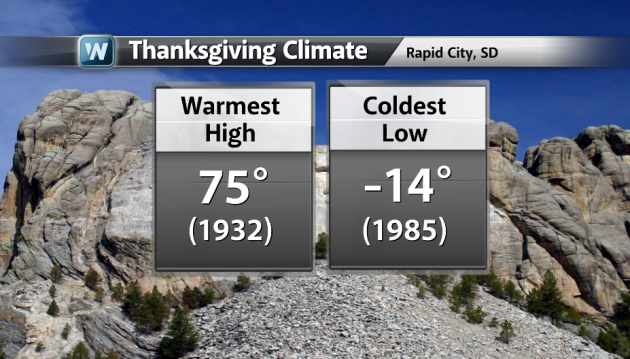 Temperature extremes also are a factor for some areas. A 90 degree spread from warmest to coolest Rapid City Thanksgiving. 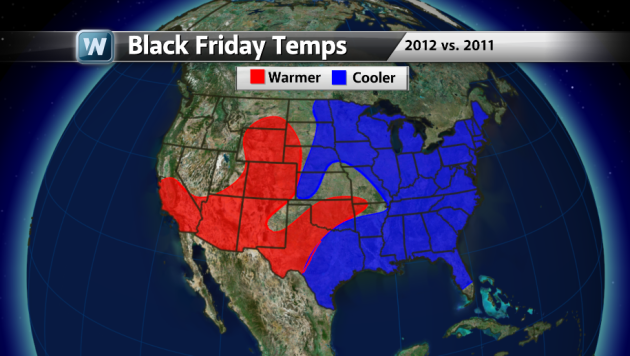 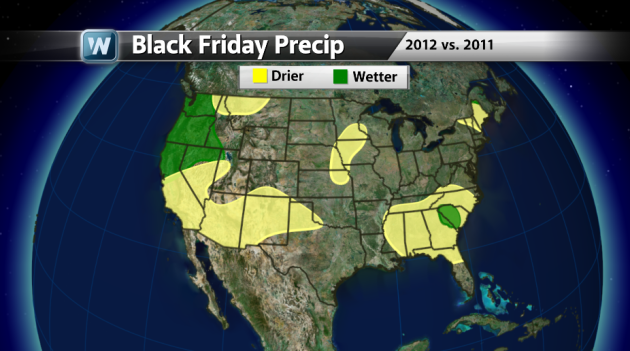 Of course, Black Friday is the day following Thanksgiving, when a lot of shopping is done. This is one year I will likely NOT be doing any shopping myself, but for those of you planning on camping out in front of your favorite store, the maps above show where we expect the weather to be either warmer or cooler than last year, as well as wetter or drier. Supposedly cooler weather means that people will be more willing to spend money, especially on cold weather gear. 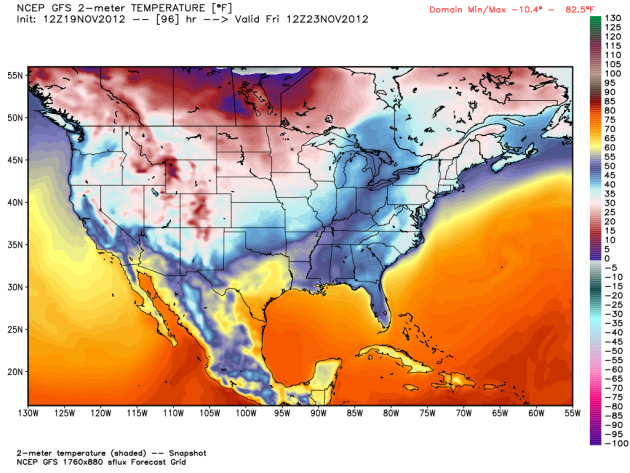 Here are Friday morning temps for the nation, as chillier air starts sinking in from Canada. Good idea to take an extra layer with you unless you live in southern Texas! 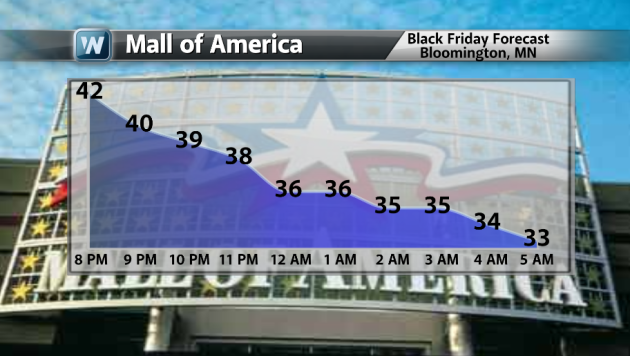 Here’s the forecast for Thanksgiving Night for the Mall of America in Bloomington, MN — the most visited shopping mall in the world. Good thing the shops are inside! 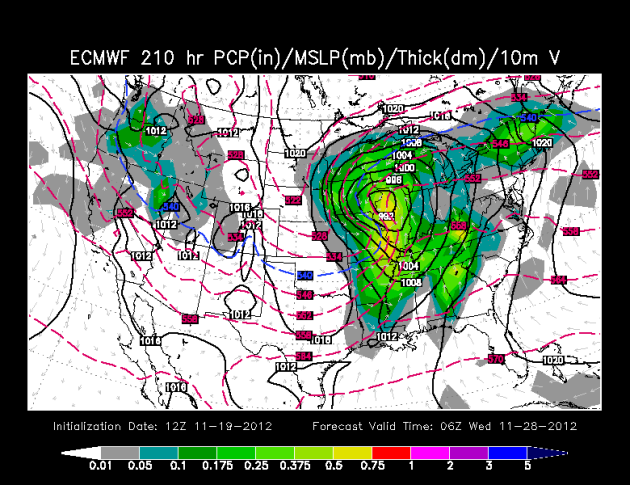 Looking ahead to any storms in the near future for the rest of the US, there could be one in the works for the middle of next week. The Euro (pictured above) is outputting a storm to hit the middle of the country with some snow likely on the north side. The GFS also has the storm, so it will be something to watch over the next few days.

I hope you have a great Tuesday — and have a Happy Thanksgiving!