New Tropical Depression Likely to Form in Gulf
Severe Risk Targets the Northern U.S. Over the Next Few Days
Dangerous Heat Continues through the Weekend
Strong Storms and Flooding Risk for Florida
Fires Continue to Burn in the Southwest
Exceptional Drought Worsens Across The West
All Weather News

23 Dec 2012, 5:41 am
Share:
A Super-Sized 2012
I’m exhausted.
2012 was the second costliest year for weather disasters, second only to 2005, when 4 hurricanes (including Katrina) hit the USA. Sandy? 3 times larger than Katrina. 2012 brought a record derecho, a 1-in-500 year flood in Duluth; the warmest year on record for Minnesota and America.
TPT Almanac’s news guru Cathy Wurzer asked me what I thought 2012’s big weather story would be for Minnesota. “Drought”. Forget fiscal cliffs; we fell off a moisture cliff by late summer. Nationwide it’s the worst drought since 1956. Unless we see heavy rains in early spring – next year could bring back unpleasant memories of 1988.
I don’t think we’re imagining it: the velocity of weather has changed. Record floods in 2011, then record drought a year later?
Crazy extremes.
We cool off today – next week one of the colder weeks of a winter that (in my estimation) will wind up warmer than average. Not as freakishly mild as last winter, but definitely above average.
The eastern U.S. experiences a family of big (rain) storms next week; heavy snow for New England. A cold Christmas Day here gives way to a light snowfall Friday & Saturday.
For now keep your snowy expectations low. 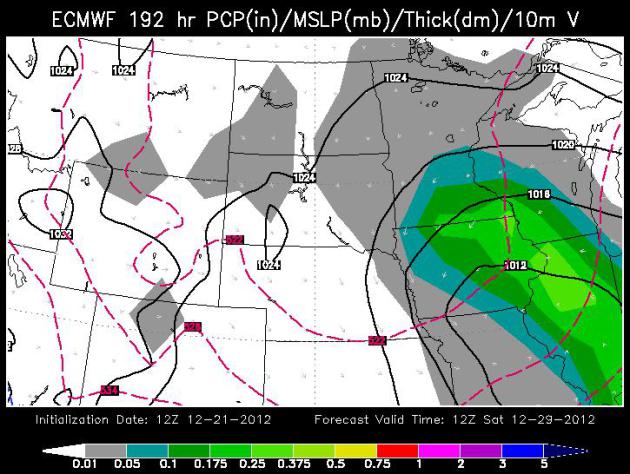 Late Week Snow. We may just squeak thru a white Christmas this year – I expect about 1″ of snow on the ground (officially) at MSP Tuesday morning. Anything under 1″ is considered a brown Christmas. The ECMWF (WSI) map above is for Saturday morning; a couple inches of snow may fall Friday into Saturday. 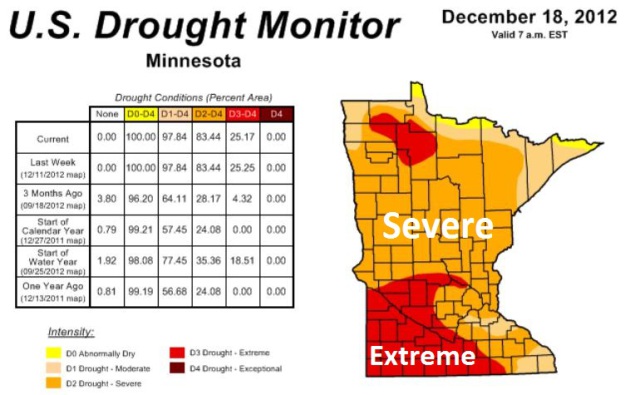 Biggest Minnesota Weather Stories of 2012? Here is an excerpt from a recent post by Greg Spoden and Pete Boulay at The Minnesota Climatology Working Group:

#5 Non-Winter of 2011-12
Some of the predictions were dire. Possibly a winter more snowy than 2010-2011 was in the cards. It didn’t happen. One of the most wimpy winters ever seen in the Twin Cities and Minnesota was the result with mild temperatures and scant snowfall. 2011-12 wound up the tenth least snowy winter on record for the Twin Cities and was the fourth warmest winter on record.

#4 Hot July 2012
2012 was the second warmest month ever for the Twin Cities back to 1872 with 80.2 degrees. Only July 1936 was warmer with 81.4 degrees. Duluth had its warmest July on record, although in 1936, the recording station for Duluth was closer to Lake Superior. To escape the heat, one had to go to International Falls where the average July temperature was 69 degrees making 2012 only the 12th warmest July on record there.

#3 Drought of 2011-2012
This could easily be #1 depending on where you live in Minnesota. The heavy rains of May and June, 2012 helped to blunt the drought a bit, but then it intensified by the late summer and continued into the fall. By late November 80% of the state was under a severe or extreme drought. By fall, soil moisture levels at the University of Minnesota Southern Research and Outreach Center in Waseca were some of the lowest on record.

#2 Northeast Minnesota Flood of June 19-20
The largest flash flood event in Minnesota for 2012 struck northeast Minnesota on June 19-20. The largest two day total was 10.10 inches just northeast of Duluth. There were so many roads flooded out in Carlton County that the county rain out of signs and more had to be trucked from the Twin Cities. One of the iconic photos of the storm was of Feisty the seal who escaped the Lake Superior Zoo and wound up on a neighborhood street. The St. Louis River engulfed and nearly destroyed the Jay Cooke State Park Swinging Bridge, but it will reopen in the summer of 2013. As for Feisty? She found refuge at Como Zoo and now has over 800 followers on Twitter.

#1 Outrageously Mild March 2012
Imagine if you will a March that was so warm it would break six record high temperature records in the Twin Cities, have four days with muggy dew point temperatures that reached 60 and wound up warmer than October! To top it off the Twin Cities had its earliest 80 degree temperature ever with 80 degrees on St. Patrick’s Day, March 17. The old record was March 23 back in 1910. March 2012 will go down in history as one of the most bizarre months temperature-wise, finishing 15.5 degrees above normal. The only other month in the historical record for the Twin Cities that matches this feat was January 2006 that also finished 15.5 degrees above normal. As a consequence, spring phenology was exceedingly early with lilacs blooming the earliest on record in the Twin Cities, with many in full bloom by mid April. 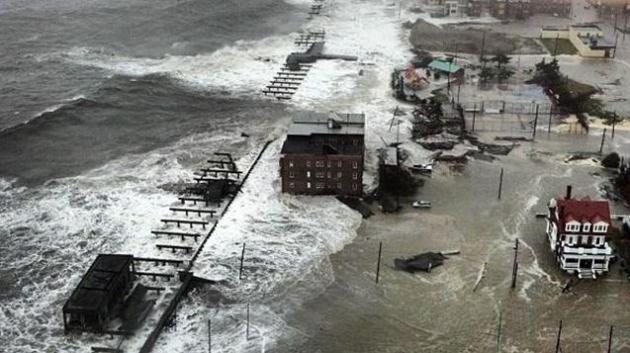 Sandy Timeline. Gizmodo.com has one of the better chronological summaries of Superstorm Sandy, including some of the most incredible (and harrowing) photos of the aftermath I’ve seen yet. Here’s an excerpt: “This time it was no hype. Sandy rampaged through New York, New Jersey and the rest of the Northeast. The damage has been enormous: more than a hundred dead, massive flooding everywhere, collapsed buildings, generator malfunctions in hospitals, multiple fires, city-wide blackouts and explosions in power plants. This is the complete story of Sandy, one week later—a chronological timeline.”

With Climate Change, Winter Isn’t What It used To Be. Here’s an excerpt of an article at The Seattle Times: “…One of the biggest surprises in the technical report on biodiversity and ecosystems is how much winter has already changed, said Bruce Stein, director of climate-change adaptation with the National Wildlife Federation, in a conference call this week. “The bottom line is that these impacts aren’t just going to happen in 50 to 100 years; many of them are already here, and are only going to get worse over time,” Stein said. “There has already been more effect on winter than we thought, and that affects what happens in summer.” In the Northwest, forests already show the effect of warmer winters in beetle-killed trees. The pests thrive without the killing cold. That, in turn, means summertime wildfires stoked with dead conifers…” 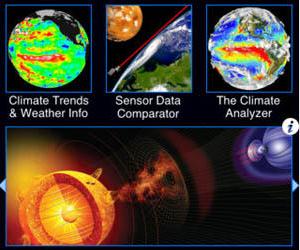 An Apps-Eye View Of Global Warming And Climate Change. Here is an excerpt of a good review of a few climate change related apps you can download for IOS and Android from MercuryNews.com: “Drought in the Midwest; forest fires in the Southwest; blizzards and hurricanes on the East Coast; rising ocean levels on both coasts. If you’re wondering what to make of the crazy weather of the past few years, maybe it’s time to check out some of the iPhone and Android apps you can use to study climate change and global warming. Quite a few are devoted to the still-contentious issue. Many are for the Apple (AAPL) operating system, but there are some in the Android app store too. By making the science visual, some of these apps let the nonprofessional see historic trends without having to wade through thousands of spreadsheets and databases…” 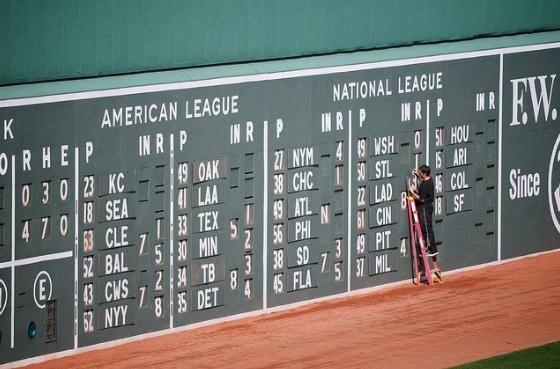 Your 2012 Climate Change Scorecard. Grist tallies up the pluses and minuses for 2012; here’s an excerpt: “As our friends at 350.org like to remind us, climate change really comes down to math. Put x amount of greenhouse gas in the atmosphere, see y degrees of warming. Our goal — meaning, our goal as an evolved, aware species that would rather not be plagued by droughts and megastorms and constant flooding and armed conflict — is to reduce how much carbon dioxide we’re putting into the atmosphere each year instead of continually increasing the amount. We’re not good at this. And time is running very low: We either need massive, quick action or it’s too late. Given that this particular year is nearing its end, we decided to figure out how the math for 2012 stacked up. Did we, on balance, change our ways so that our net greenhouse gas emissions declined, or did we yet again increase how much we’re polluting? Are we running in the positive or the negative or what?…” (Photo above: “mikepic”)

Four Feasbile Ways Obama Can Work On Climate Change. Here’s a snippet from a recent Bloomberg article: “As the president looks toward his second term, he has pledged that climate change will be one of his top three priorities. Given that a carbon tax or cap-and-trade program still seem to be remote possibilities, what else can be done? Here are four plausible policy options.