84 Hour Future Radar. HAMweather visualization of NOAA’s NAM data shows showers and T-storms, some severe, popping up across the Ohio Valley today, pushing into the Mid Atlantic. A plume of moisture pushing out of the Gulf of Mexico may drop significant rains on drought-plagued regions of Texas and Oklahoma; T-storms reaching the Upper Midwest again by late Saturday and Sunday. 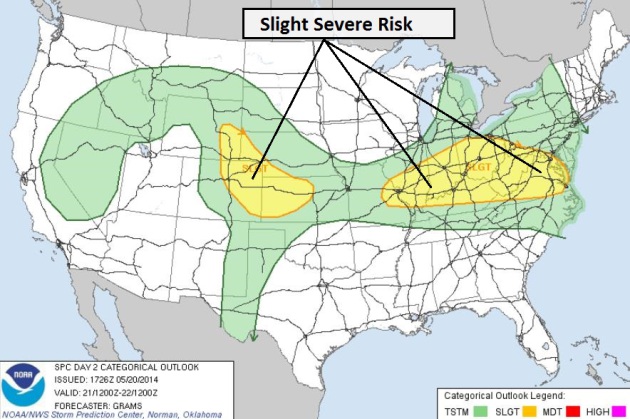 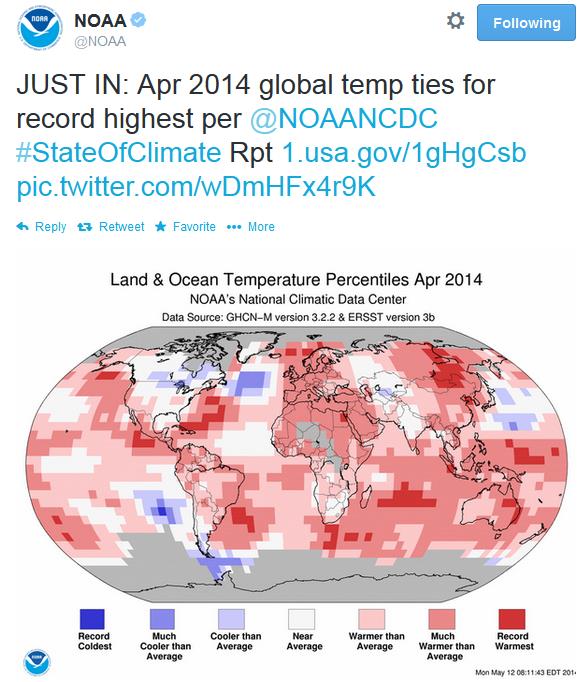 April 2014 Ties 2010 For Warmest On Record, Worldwide. And the first 4 months of 2014 were the 6th warmest on record. A strong El Nino forecast for the latter half of 2014 may cause global temperatures to spike even more. Here are more details from NOAA NCDC: 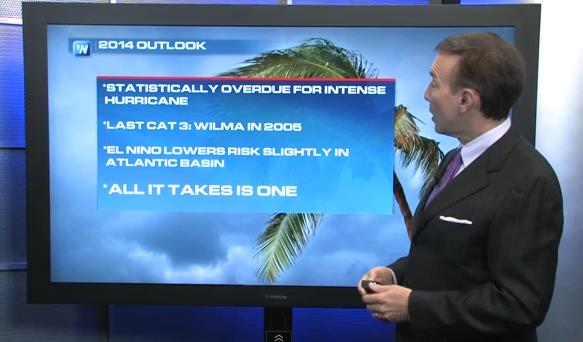 Are We Overdue For A Major Hurricane? The short answer is yes. It’s been 9 years since a Category 3 or stronger hurricane hit the U.S. coastline (Wilma in 2005). Among other fears: complacency. It’s been so quiet, maybe we let our guard down a little. In today’s Climate Matters, new features and capabilities from NHC in 2014, who remind us all that “it only takes one storm”: “WeatherNationTV Chief Meteorologist Paul Douglas goes over the unusually quiet past few years for hurricanes in the Atlantic. Statistically we are vastly overdue for another major hurricane. Why has the Atlantic been so quiet?” 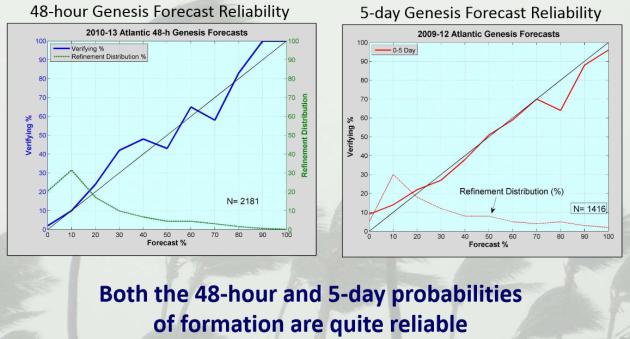 New Hurricane Tools and Capabilities in 2014. NHC will be issuing operational storm surge forecasts if and when a tropical system approaches the coast, but I found a few other interesting nuggets here. 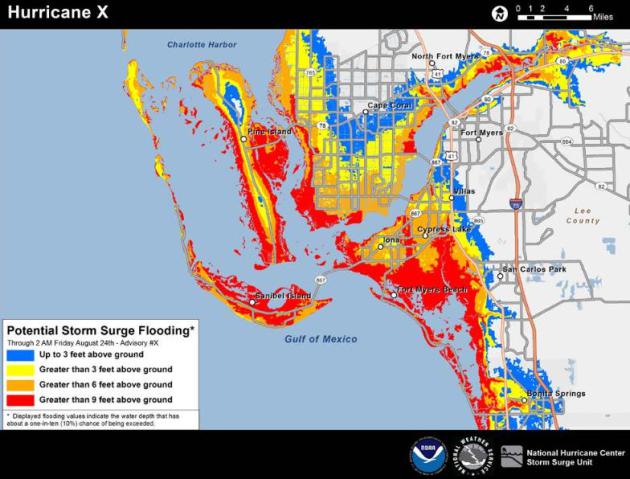 Sample NOAA NHC Storm Surge Forecast. No, residents of Tampa don’t need to be concerned, at least not yet. Keep in mind most of the structural damage from hurricanes doesn’t come from high winds, but from the “storm surge”, a rapid rise in water levels triggered by sustained winds and low pressure, pushing water well inland. This year NHC will begin issuing surge predictions based on a storm’s track, intensity, natural tides and bathymetric data (slope of terrain just offshore). 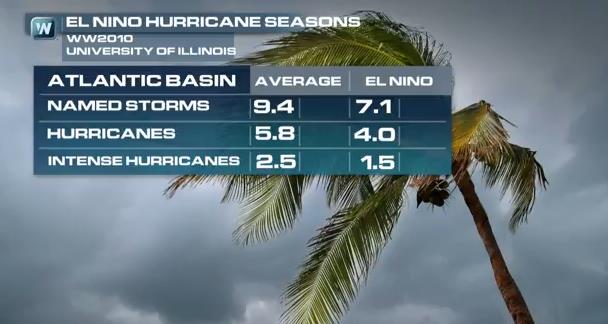 How Might El Nino Affect Hurricane Season? In clip #2 of Climate Matters: statistically El Nino summers and falls tend to increase wind shear over the tropics, resulting in fewer tropical storms and hurricanes. But that’s no reason for complacency – we’ve had a nearly 9 year lull in hurricane activity in the Atlantic and Caribbean, but at some point America’s luck will run out. Will 2014 be the year? “The last major hurricane to hit the United States was Wilma in 2005. Since then the tropics have been *relatively* quiet, and that is leading some meteorologists to worry. WeatherNationTV Chief Meteorologist Paul Douglas goes over just why we shouldn’t let our guard down.” 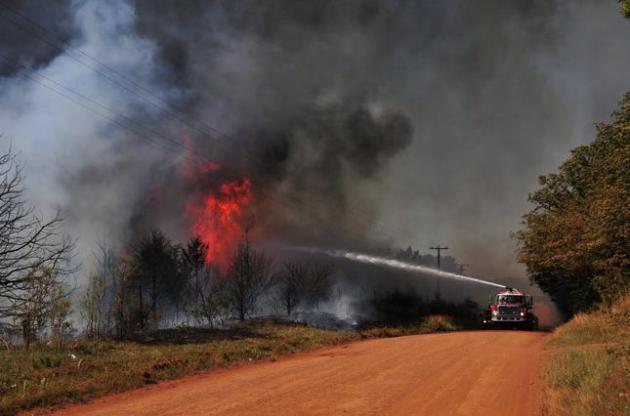 Massive Wildfires Cause For Concern In Oklahoma. Here’s an excerpt from The Daily Ardmoreite in Ardmore, Oklahoma: “Wildfires in Oklahoma so far this month have burned more than 60 times the average acreage, according to data from the Oklahoma Forestry Services. Since 2005, the state has averaged 454 acres burned from May wildfires. So far this month, more than 30,000 acres have burned, The Oklahoman reported Sunday. Guthrie Fire Chief Eric Harlow says that if things don’t change, fire crews will be in for a long summer. “We shouldn’t have this fire behavior the first week of May,” he said….”

File Photo credit above: “Firefighters work to extinguish a flare up on Monday, May 5, 2014, in Guthrie, Okla. Gov. Mary Fallin has declared a state emergency across Oklahoma after several wildfires broke out across the state, including a blaze north of Oklahoma City that destroyed at least a half dozen homes and left one man dead.” (AP Photo/Nick Oxford).

Forest Services Expands Fire-Fighting Tanker Fleet. Under the extenuating conditions (historic drought from California to Texas and Oklahoma) this strikes me as a prudent move. Here’s an excerpt from AP and ABC News: “As the Obama administration pushes Congress to ensure that enough money is available to fight destructive wildfires, the U.S. Forest Service announced Tuesday it was adding four aircraft to its firefighting fleet ahead of what’s expected to be another hot, dry summer in the West. In a statement, the service said it will have a second DC10 and three smaller planes in service in the coming weeks to support over 10,000 firefighters “in the face of what is shaping up to be a catastrophic fire season in the southwest…” 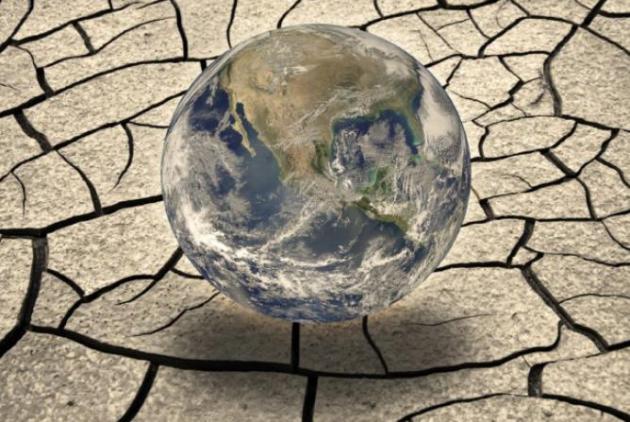 Monitoring The State of Global Rainfall and Drought. redOrbit has an interesting story about pushing the science to be able to accurately predict drought, months in advance. Here’s an excerpt: “…A team of researchers from UC Santa Barbara and the United States Geological Survey (USGS) has developed a new dataset that can be used for environmental and drought earl warning. The dataset is called CHIRPS, or Climate Hazards Group Infrared Precipitation with Stations, and it is the result of a collaboration between UCSB’s Climate Hazards Group and USGS’s Earth Resources Observations and Science (EROS). CHIRPS combines space observed rainfall data with more than three decades of ground station data collected worldwide…” 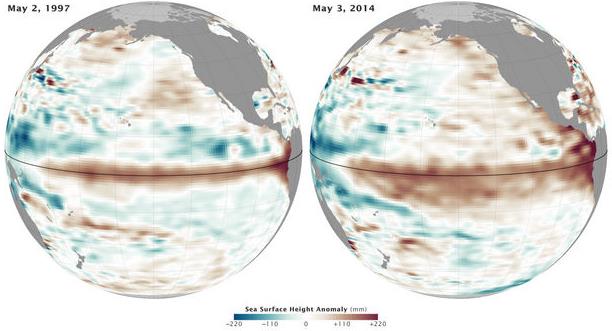 Strongest El Nino in 17 Years Brewing: Oregon Weather Watch. OregonLive.comhas more data from NASA on a pending El Nino event, which may be the most significant since 1997-98. Here’s an excerpt: “NASA satellites and ocean sensors are showing that sea surface temperatures in the equatorial Pacific Ocean this May look similar to the conditions in May 1997 that resulted in one of the strongest El Niño events of the last century during the fall and winter of 1997-98…” 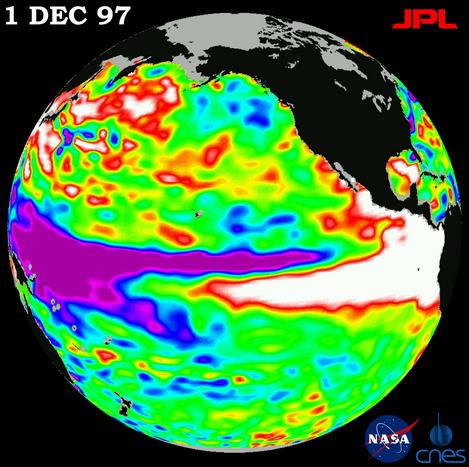 How El Nino Might Alter The Political Climate. Here’s a snippet from The Upshot atThe New York Times: “…But El Niño has the potential to do more than offer a one-time jolt to climate activists. It could unleash a new wave of warming that could shape the debate for a decade, or longer. In this chain of events, a strong El Niño causes a shift in a longer cycle known as the Pacific Decadal Oscillation, which favors more frequent and intense El Niños during its “warm” or “positive” phase. The oscillation has been “negative” or “cool” since the historic El Niño of 1998…”