Snow, Ice, and Cold Air Target TX - LA - MS This Morning
Snow and Ice Threat for the Carolinas
Severe Storm Chances in Florida Today
Winter Alerts Issues for Next Round of Snow in the West
Brief Tropical System Possible in the Eastern Pacific
Another Blast Of Arctic Air To Impact Central and Eastern U.S.
All Weather News

Volatile. Warm air surging north will spark severe storms from Minnesota south to Texas today; a few isolated tornadoes can’t be ruled out. Locally heavy rains may trigger flash flooding in some communities; the next round of (lighter) showers pushing into Minnesota in time for Saturday’s Fishing Opener. NAM Future Radar courtesy of NOAA and HAMweather.

Moderate Risk. A Moderate Risk of severe storms has been put in place from the Storm Prediction Center from just west of the Twin Cities down through Des Moines, IA. This is the best area of seeing a few isolated tornadoes as well as large hail later this afternoon. 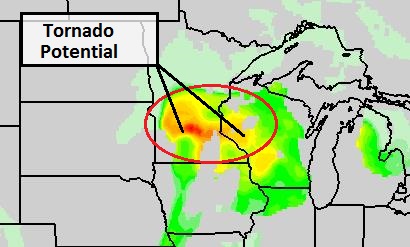 The latest frontal system has already spun up confirmed tornadoes over northeastern Colorado (well away from the Denver market), and I expect more numerous tornadoes Thursday, especially central Minnesota into central Iowa, but a few tornadoes may develop as far south as Kansas City, Little Rock and Dallas. The greatest risk (as always) is high winds and hail. Any tornadoes that do form will impact a tiny percentage of the area – but it’s impossible to predict which towns and larger metro areas may be impacted until 15-30 minutes before they strike. Pay attention to all watches and warnings later today.

Tornado Hunter Wants To Walk Into A Twister. I hope he has a chat with his life insurance guy first. No, I would not try this at home. I suspect he’s watched the movie “Twister” one too many times. Here’s an excerpt from CBS St. Louis: “…Steve Green is a self described “tornado hunter.” In 2004, he spent $500,000 on an armored vehicle and drove right into a tornado. Now, 10 years later, he’s going to try to walk into a twister. His plan is to drive a 4×4 vehicle with a motorcycle attached out in front of the storm, jump on the bike, get in front of the winds, screw himself into the ground using corkscrews (think of what you’d tie a dog leash to) and hold on tight…”