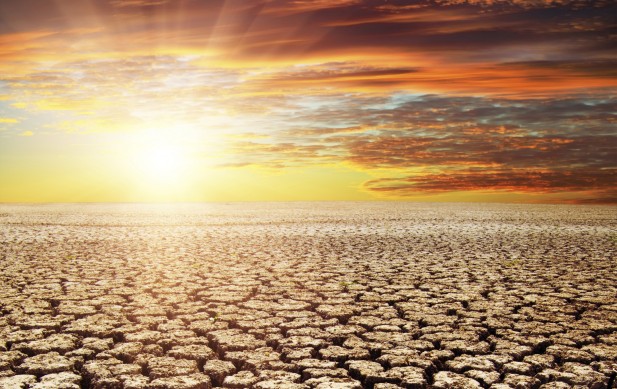 Global Heat Wave Disasters. I had no idea there were 126 killer heat waves, worldwide, from 1980 – 2008, with 89,889 deaths linked to extreme heat. More details from preventionweb.net. 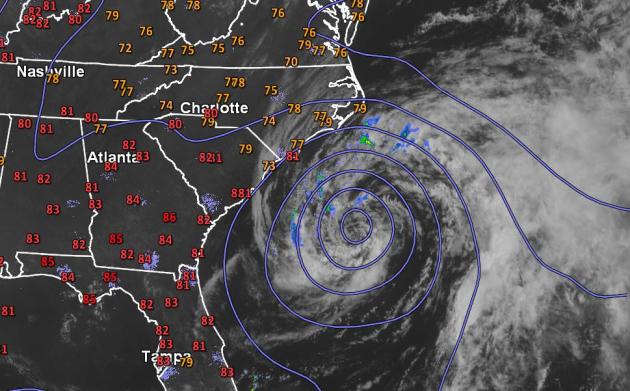 Cyclonic Swirl From “Beryl”. Packing a 50-mph punch, Tropical Storm Beryl more closely resembled an extratropical storm Saturday  – conditions not ripe for hurricane development as it tracks toward Savannah, Georgia or possibly Jacksonville over the next 48 hours. Beryl is limping along at about 5 mph toward the southwest. Image: grEarth.

“Beryl remains classified as a sub-tropical Storm at 8pm by the National Hurricane Center.  The newest hurricane hunter report indicated maximum sustained winds at 50 mph with higher gusts.  Beryl is moving SW at 6 mph tonight and has intensified slightly with pressure at 998mb.
The ridge will keep building to the east and this will keep Beryl moving to the Southwest and turning to the West later on Sunday.  There is a small band of thunderstorms near the center of circulation, but little overall strengthening is expected for Beryl.  Dry air continues to be entrained, which is very apparent on water vapor imagery.
Beryl is expected to make landfall somewhere along the northeast Florida coast Sunday evening.  The coast from northern Florida to South Carolina can expect storm surge of 1 to 3 ft during high tide.  Most models, including the BAMS, now have Beryl moving farther inland over the Florida panhandle than previously forecast.  From there models diverge somewhat as a middle level trough moves towards the Tennessee Valley and east coast.  This should pick Beryl (or the remains thereof) and pull it back east across southern Georgia/northern Florida and then up the east coast.  This is contingent on the strength of the approaching trough, however, and the higher resolution 15km BAMS has Beryl going as far west as Tallahassee before curving back to the NW.”
Baron Forecast Team.
Curtis Brideau

Tropical Storm Beryl. Packing 50 mph sustained winds, Berly is expected to drift toward the southwest, coming ashore somewhere between Savannah, Georgia and Jacksonville, Florida sometime tonight. It is not expected to intensify into a hurricane. Map: NHC. 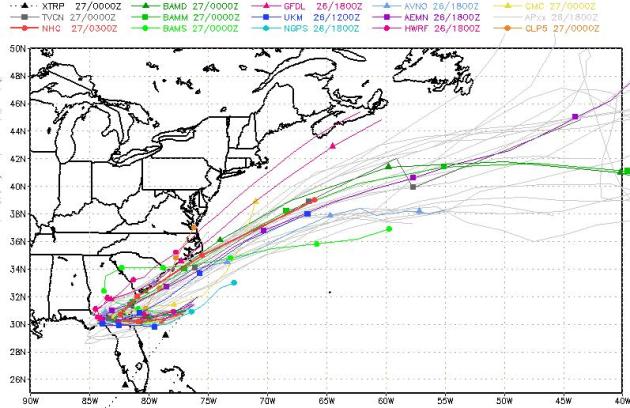 “Spaghetti Plot“. Here are a couple dozen model solutions for the projected path of Beryl – almost all of them bring the storm ashore as a moderate tropical storm, somewhere between Savannah and Jacksonville, before recurving to the northeast and swept out to sea. Map: source. 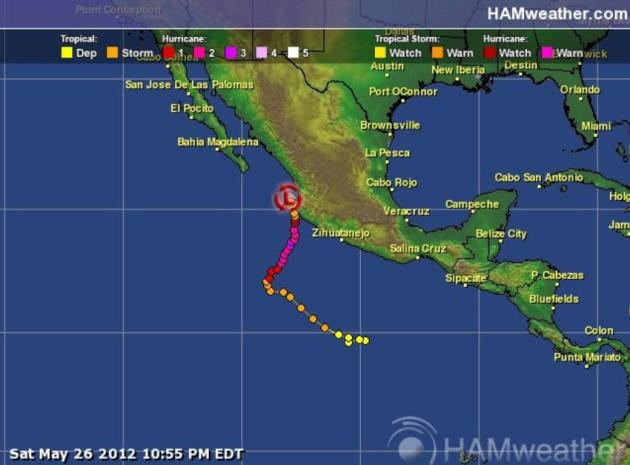 Tropical Storm “Bud” Brushes Mexico’s West Coast. Here’s an update from Huffington Post: “Bud is weakening and becoming increasingly disorganized in the Pacific just off Mexico. The U.S. National Hurricane Center in Miami said Saturday that Bud had degenerated to a remnant low. It was expected to dissipate within the next day or say. Maximum sustained winds had weakened significantly and were near 30 mph (48 kph) as the storm hovered about 15 miles (24 kilometers) off the coast of Cabo Corrientes, Mexico. Forecasters say the storm could still drop another inch or two of rain along Mexico’s southwestern coast.” 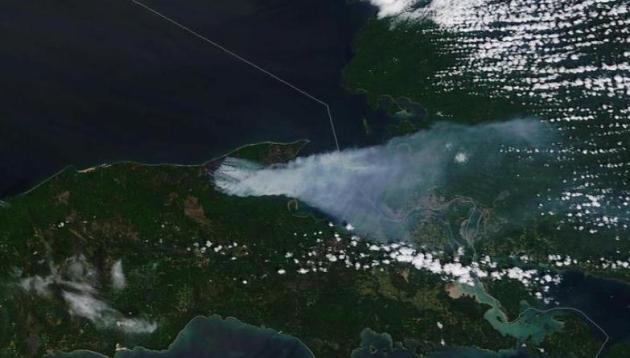 Michigan Wildfires From Space. The Columbia, South Carolina office of the NWS shared this, via Facebook: “Thought we would share with you an outstanding 250 meter resolution Visible satellite image from this afternoon in the Upper Peninsula of Michigan. Featured in the image is a large fire with a eastward drifting smoke plume. Also visible is the lake breeze boundary identified by the cumulus cloud field.” 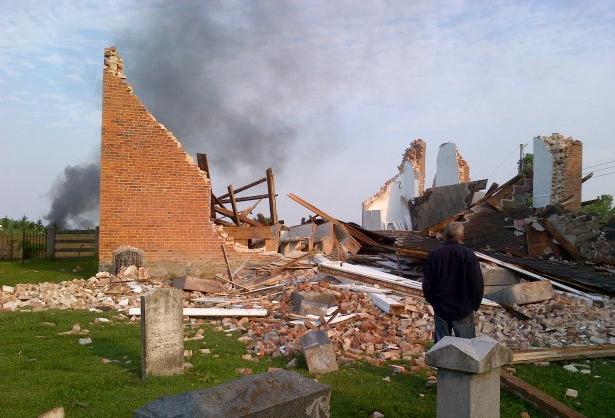 Tornado Touchdown Confirmed Near Montreal. Yes, “Tornado Alley” is shifting north over time. Here’s an excerpt of a story at Canada’s CBC: “Environment Canada has confirmed an F-1 tornado touched down northwest of Montreal Friday night. Meterologist René Héroux from Environment Canada said the tornado touched down in St-Benoît-de-Mirabel. Damage at the scene suggests winds reached up to 150 km/h, he said. Trees were uprooted, roofs damaged and windows shattered as the severe storm rattled through southern Quebec Friday night. The Mirabel area, northwest of Montreal, was hit the hardest.”

Photo credit above: “The storm flattened this church near Mirabel, Que.” (Pascal Robidas/Radio-Canada) 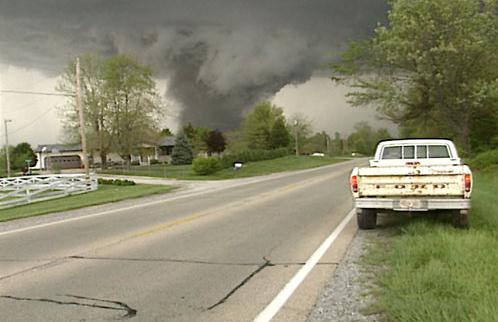 Bad Idea: Six Myths About How To React During A Disaster. I think Myth #6 is wrong – a ditch still offers more protection in a tornado than staying in your car, which will become airborne if it’s a major tornado. But I learned a few new things from this story at foxbusiness.com; here’s an excerpt: “Here are some common misconceptions about disaster preparedness and what you really need to do to stay safe.

Myth No. 2: Open the windows in your home to equalize the pressure caused by a tornado

This is a terrible idea for a couple of reasons, explains Julie Rochman, president of the Insurance Institute for Business & Home Safety. “A, it doesn’t work. And B, it’s a really bad idea to stand in front of a window when a tornado is flinging debris all over the place. Plus, if there’s an opening in the window, you could be sucked out.”

Rochman recommends that people “leave their windows alone and instead go to a windowless area, like a shelter, your basement or a windowless room.”

“Safe Rooms” Too Expensive For Homeowners, Even In Tornado Country. Here’s a story from the Star Tribune’s Bill McAuliffe, picked up by scrippsnews.com: “Even in the heart of tornado country, where more than 3,000 tornado-damaged have been under repair the last year, there is still not a “safe room” in sight. Safe rooms are reinforced interior spaces designed to offer even more protection from tornadoes and hurricanes than basements do. But they’re expensive. And across north Minneapolis, residents are even cutting corners on shingles, said contractor Ishmael Israel. “They’re opting for the more economical route,” Israel said, adding that typical disaster precautions in the neighborhood now include storing bottled water and having working flashlights and extra batteries. Safe rooms, which can also do double-duty as laundry rooms or bathrooms, are designed to withstand a blow from a 15-pound 2-by-4 fired at 100 mph. Flying debris, such as lumber, is one of the most dangerous features of a tornado. Standard safe rooms also offer overhead protection that basements often do not.”
* basement safe room above courtesy of a company called “rhinovault” that offers a wide range of safe room options. 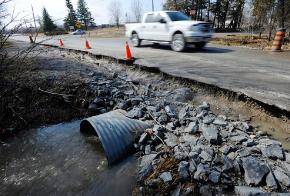 March 15 Storm Dumped Enough Water To Be Classified As A 1-In-100 Year Storm. Here’s an update from The Peterborough Examiner, serving Ontario, California: “A storm that struck Peterborough on March 15, causing localized flooding in some neighbourhoods, dumped enough water on the city to be classified a one-in-100-year storm, shows a report that goes to city council Monday night. The city identified 83 road flooding locations, 23 culverts or catch basins that overflowed, 53 flooded basements and 45 sewage backup spots. Between 40 millimetres and 80 millimetres of rain fell on the city, depending on the location in the city, according the city’s rain gauge network. The city should only get hit by a storm that severe once every 100 years, utility services director Wayne Jackson states.”
Photo credit above: “Pylons warn motorists to a washed out sections of Harper Rd. on Friday, Mar. 16, 2012 in Peterborough following a severe storm.” CLIFFORD SKARSTEDT/PETERBOROUGH EXAMINER/QMI AGENCY

Snowe Calls For Action In Wake Of Reported Mismanagement Of National Weather Service Funding. From Maine Senator Olympia Snowe’s D.C. offices – here’s a snippet of a recent press release: “WASHINGTON, D.C. – In response to the announcement that the Director of the National Weather Service (NWS), Jack Hayes, was stepping down from his position today in response to an investigation that senior management at NWS misappropriated millions of taxpayer dollars, U.S. Senator Olympia J. Snowe (R-Maine), the Ranking Member of the Oceans, Atmosphere, Fisheries, and Coast Guard Subcommittee, released the following statement:  “The deeply troubling revelation that senior staff at the National Weather Service, which provides indispensible storm and weather forecasting, have been conducting improper and potentially illegal transfers of taxpayers’ money is unacceptable.  While the Director of the National Weather Service has stepped down, there are many more remaining questions which require answers from both National Oceanic and Atmospheric Administration and the Department of Commerce – and any and all individuals who bear responsibility in this misconduct must be held fully to account.”