* Greatest tornado risk appears to be between 4 PM and 8 PM this evening.

Upgraded to Moderate Threat. Whenever NOAA SPC goes with a Moderate or High Risk of severe storms there’s an inherent implication that we won’t be tracking small, brief, garden-variety tornadoes later in the day. There’s enough low-level moisture, instability and wind shear aloft to sustain long-lasting, long-track supercell thunderstorms. These are the especially damaging storms capable of baseball-size hail and large tornadoes. This is the area most ripe for the large tornadoes, and “families” of tornadoes that form in quick succession, capable of significant injury or loss of life. 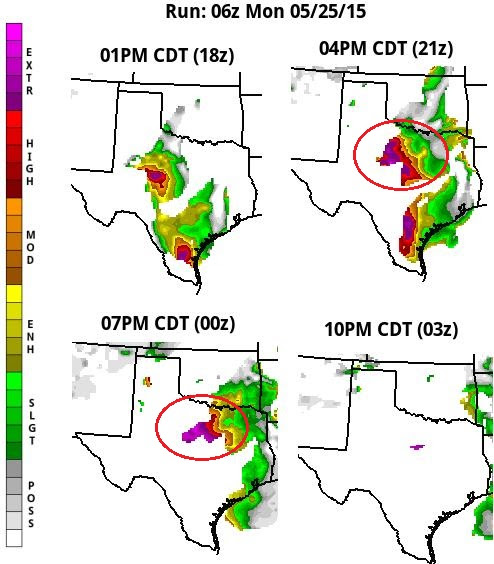 EHI: 7 PM This Evening. Our Hamweather.com models show a significant risk of violent storms over the southern third of Minnesota, where meteorological conditions may converge for a significant outbreak later today.

Summary: This is prime time for severe storms and tornadoes across much of the central USA,  and today promises to be another busy day tracking potentially dangerous cells on Doppler radar. As always, the big question/concern: will they hit sparsely populated farmland or urban/suburban areas?

One response to “Severe Threat Increasing This Afternoon”