Why We All Need To Slow Down. This is incredible footage, courtesy of MnDOT’s traffic camera up in Forest Lake, focused in on I-35 South. The chain-reaction accident happened Thursday morning – many drivers unable to slow down in time. Video clip courtesy of MnDOT.

Flirting With Zero. Although not as cold as last week, temperatures slip below zero the next couple of mornings across the Upper Mississippi Valley, while the Deep South thaws into the 50s; 40s pushing as far north as metro New York City this weekend. 2-meter NAM temperatures: NOAA and Ham Weather. 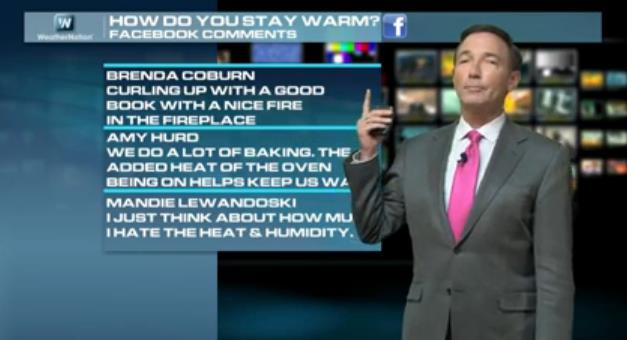 Winter Coping Skills. In addition to taking a look at the latest Super Bowl weather forecast, today’s edition of Climate Matters tackles the Midwinter Blues, and how some viewers are keeping a positive mental attitude, in spite of snow, ice and nagging wind chill. We want to hear more of your comments and suggestions via Facebook: “WeatherNationTV Chief Meteorologist Paul Douglas goes over some of the Facebook comments shared with us. How do you cope with the cold? Also, what (climatologically speaking) were some of the most extreme Superbowls? And the question we are all asking, what is the game time forecast?” 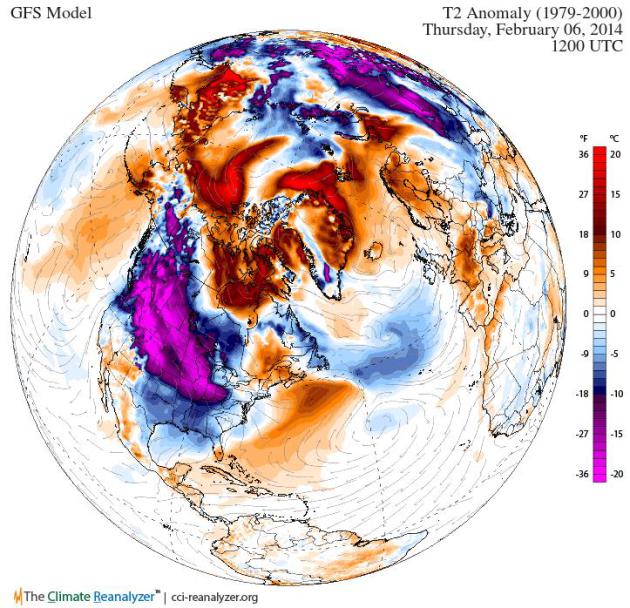 Stuck In A Rut. Temperature anomalies across the Northern Hemisphere next Thursday continue to show an “upside-down” pattern, temperatures well above average from northern Canada into the Arctic, Greenland and Scandanavia, with a lingering stain of the Polar Vortex from southern Canada into the central USA. No significant moderation until the third week of February. Climate Reanalyzer graphic courtesy of the University of Maine. 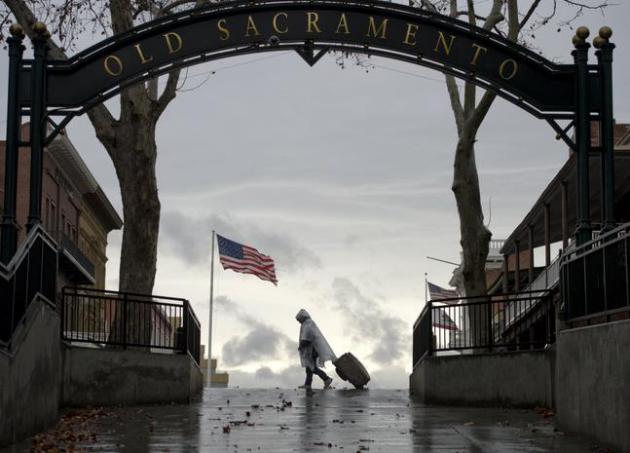 California Drought: Communities At Risk Of Running Dry. The San Francisco Chronicle has the details – here’s a clip: “It is a bleak roadmap of the deepening crisis brought on by one of California’s worst droughts – a list of 17 communities and water districts that within 100 days could run dry of the state’s most precious commodity. The threatened towns and districts, identified this week by state health officials, are mostly small and in rural areas. They get their water in a variety of ways, from reservoirs to wells to rivers. But, in all cases, a largely rainless winter has left their supplies near empty...”

Photo credit above: “A pedestrian walks near the underpass that connects Old Sacramento with Downtown Sacramento during the first day of rain in 52 days on Wednesday, Jan. 29, 2014 in Sacramento, Calif. The National Oceanic and Atmospheric Administration’s Web site is predicting a tenth of an inch of rain in San Francisco over the next two days and more than 2 inches in parts of Sacramento.” (AP Photo/The Sacramento Bee, Hector Amezcua).

Drought Forces California Farmers To Cut Back On Planting. You can listen to the story from NPR.

Mea Culpa. Every storm is different, and it doesn’t take much of a jog in a storm’s track or intensity to throw the forecast off-track. The snow and ice came in 4-7 hours earlier than predicted, which contributed to the problem. I have a lot of respect for meteorologist James Spann, in Birmingham. He doesn’t try to spin the truth – he tells it like it is, and when he’s wrong, he owns up to it. He is the exception to the rule. Here’s a snippet from al.com: “Birmingham meteorologist James Spann, who was called just about every name in the book as an unexpected snow shut down most of Central Alabama, has apologized for what he called his worst “forecast bust” since the winter storm of 1982. Here’s what the Spann wrote on his ABC 33/40 weather blog today:

“In terms of human impact, yesterday’s forecast ‘bust’ was the most significant for me since January 1982, when we had a timing error of about six hours on the arrival of freezing rain and snow...” 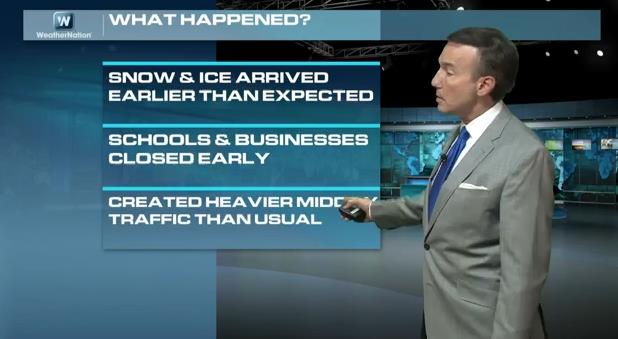 What Really Happened in Atlanta? My Take. Based on what I know of the storm, predictings, onset and impact, I recorded a segment for WeatherNation TV explaining why 2″ of snow, coming at precisely the wrong time and temperature, coupled with decisions to close school early and send many office workers home prematurely, created a cascade of unintended consequences. That, and how traditional (chemical) snow removal and spinning tires can turn snow into a sheet of glaze ice: “WeatherNationTV Chief Meteorologist Paul Douglas goes over just what went wrong in the historic snow and ice storm that blanketed the Southeast. Cars were abandoned, people slept in grocery stores, kids were stuck on buses, and a 16 hour commute home. What what wrong?”

Super Bowl Weather Climatology. Rutgers University has a terrific site devoted to Super Bowl Weather, not only the forecast, but climatology – what has happened on Ground Hog Day in years gone by, focused on Newark, the closest regularly reporting weather station in the area. Check out the latest at biggameweather.com. 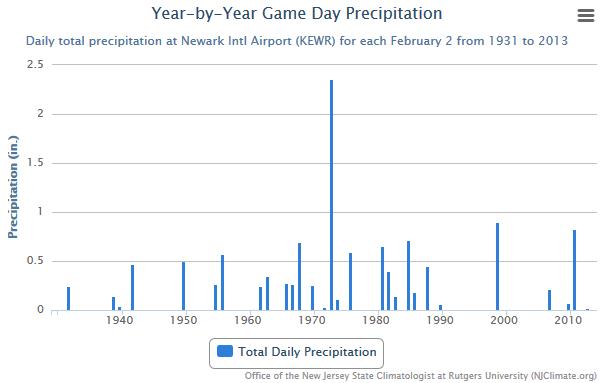 Good Odds. Here is one of the graphics at biggameweather.com that caught my eye, February 2 precipitation at Newark since 1931. The 70s and 80s were much wetter (and snowier), with fewer storms since 1990, at least on February 2. I still don’t see any blizzards of mega-storms. What can go wrong? 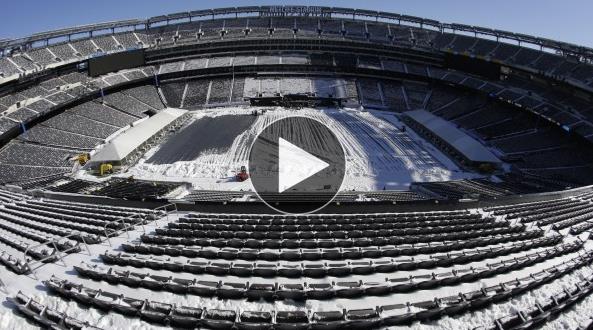 Would Snow Be A Good Thing At The Super Bowl. Call me crazy, but I suspect the short answer is “no”. The Washington Post takes a look with a video forecast from Capital Weather Gang; here’s an excerpt: “The Post Sports Live crew debates whether it’s good or bad that a cold-weather city is hosting the Super Bowl. The Capital Weather Gang’s latest forecast seems to indicate that dry weather is likely. The best thought I’ve heard on it was that snow during the game would be scenic and fun, but snow leading up to it could cause a real mess…” 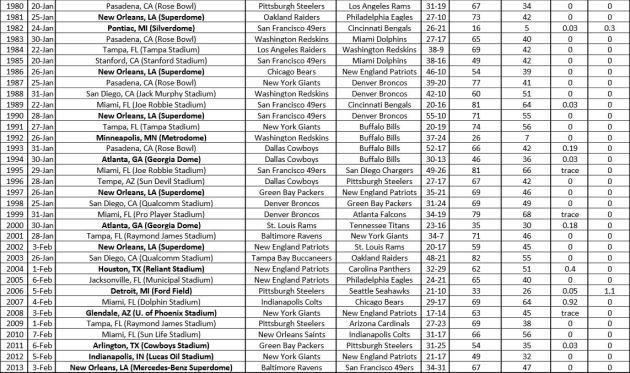 Super Bowl Weather Conditions Since 1967. I thought this document (PDF) from NOAA was interesting, highlighting the coldest, warmest, snowiest and wettest Super Bowls. Sunday’s game may go down as the coldest (for a game played without a dome). 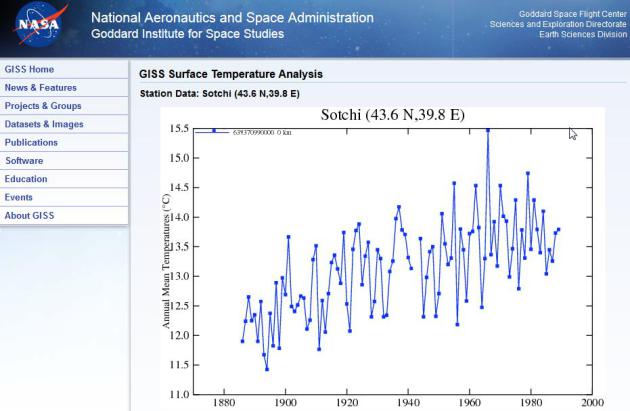 Sochi Temperature Trends Since 1900. NASA has an interesting graph showing mean annual temperature trends for the city about to host the Winter Olympics. 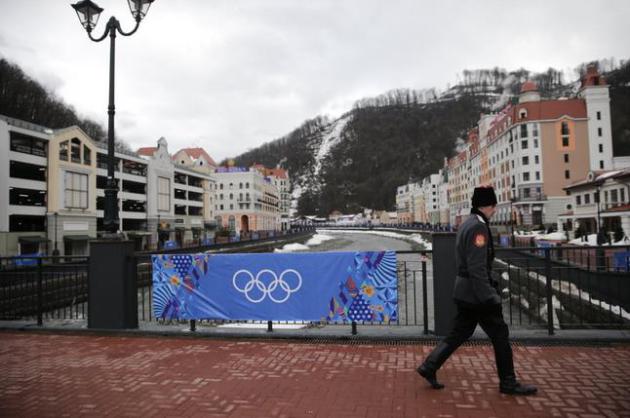 Melting Snow. The forecast from Weather Underground shows highs within a few degrees of 50F almost every day next week at Sochi, nighttime temperatures staying above freezing (in the city). It’s a good thing they saved/stockpiled snow from last winter. Smart move.

Photo credit above: “A Russian Cossack walks across the bridge, Thursday, Jan. 30, 2014, in Krasnaya Polyana outside the Black Sea resort of Sochi, Russia, where the snow and sliding sports venues for the 2014 Winter Olympics are located.” (AP Photo/Jae C. Hong).

Record Wet January For Parts Of Southern Britain. Here’s an excerpt of a summary from the UK Met Office: “Early Met Office statistics for January 2014 show that the southeast and central southern England region has already had its wettest January in records going back to 1910, with three days still to go. A large area of southern England from East Devon to Kent and inland across parts of the midlands has already seen twice the average rainfall for the month…”

Talking About The Weather: The Next Level. The Atlantic provides some good resources for weather nerds (um, enthusiasts) to track the weather on their own; here’s an excerpt: “…The data keeps going. NOAA can give you surface temperatures from 9,000 weather stations, some of which have data stretching back to the beginning of the 1900s. In certain local areas, like San Francisco, people have made this history easier to access. Perhaps the coolest of these projects is @datapointed’s look at rainfall patterns in the Bay before and after Valentine’s Day.  Or if you prefer a more visual interface, Forecast.io brings you Quicksilver...”