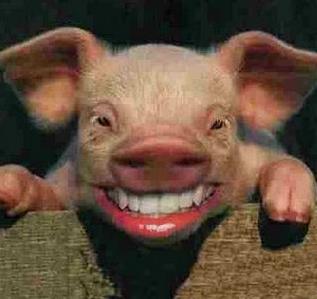 LipstickPutting a positive spin on our tenuous spring is the meteorological equivalent of putting lipstick on a pig. But there have been a few benefits: fewer severe storms – a delayed allergy and bug season. A temptation to want to talk about anything BUT the weather.The atmosphere has an uncanny ability to balance things out over time, evening out the pain & pleasure. With a strong El Nino brewing I’m betting on an unusually mild autumn. I also suspect next winter won’t look anything like what we just muddled through.* vaguely troubling photo credit above: jacket2.org. 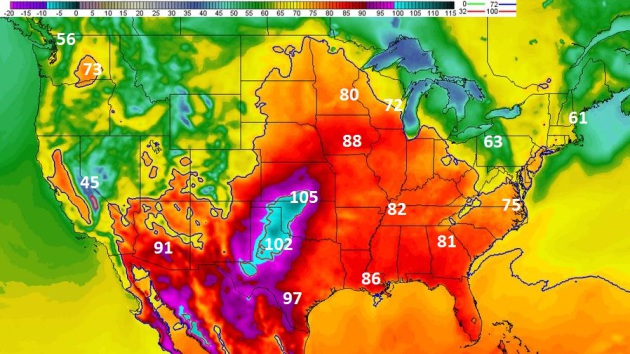 Tuesday, 4 PM. It’s time for New England and parts of the west to feel the chill, as a ridge of high pressure pushes north across the Plains. Highs tomorrow top 100F from southern Kansas into central Texas; 80F readings possible as far north as the Twin Cities and Chicago. NAM guidance: NOAA and HAMweather.

84 Hour Future Radar. NOAA’s 12km NAM model shows a few showers and possible thunder pushing across the Upper Midwest into the Great Lakes today and early Tuesday, then drier weather returning for the rest of the week. A stalled storm east of the Canadian Maritimes rotates a cold rain into northern New England, a few showers kick up some dust near Lake Tahoe and Reno, but it won’t be the soaking California needs. 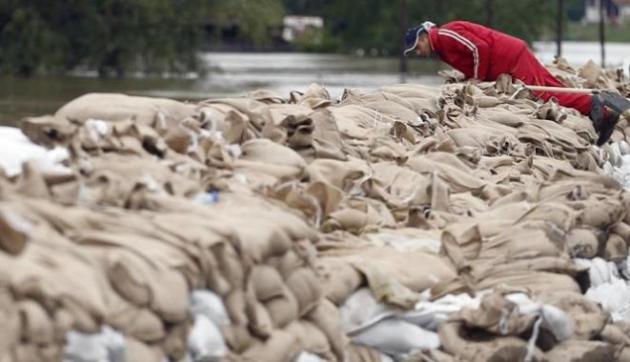 Most Destructive Flood In Over 120 Years Ravages Serbia, Power Plant In Jeopardy. 3 months worth of rain fell in less than 3 days last week as a storm stalled over the Balkans, creating widespread and historic flooding. Here’s an excerpt frominquisitr.com: “Thousands of people were forced to abandon their homes Saturday as the Sava River broke through defenses and began to flood Serbia, Croatia, and Bosnia. As the flood worsened, waters rising up to the second floor of houses, people who had not yet been evacuated had to seek safety on their roofs. Many of the homes in the affected area of Serbia that were not destroyed are without electricity and drinking water…”* The BBC has a video update here.

Thousands of people were forced to abandon their homes Saturday as the Sava River broke through defenses and began to flood Serbia, Croatia, and Bosnia. As the flood worsened, waters rising up to the second floor of houses, people who had not yet been evacuated had to seek safety on their roofs. Many of the homes in the affected area of Serbia that were not destroyed are without electricity and drinking water.

Rain has been falling in Serbia, and its surrounding countries, for the past 4 days. 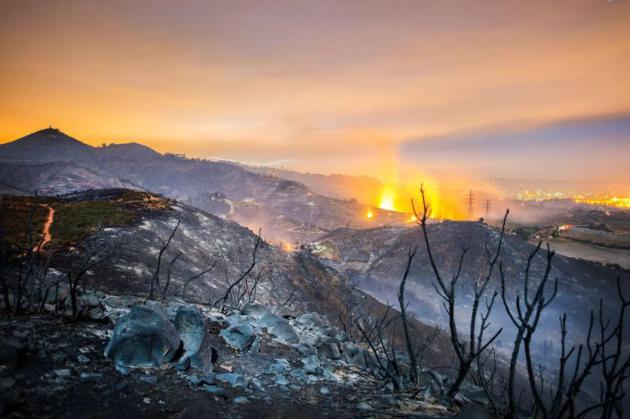 San Diego Wildfires Leave Haunting, Burned-Out Landscapes. Here’s an excerpt of a photo essay from TIME.com: “At least twelve separate fires raged through 20,000 acres of land in San Diego County, Calif. this week, leaving scorched hillsides and piles of ashes where houses once stood. Most blazes were under control Saturday, with at least one man charged with arson for starting a fire.”Photo credit above: “A longtime exposure shows smolderings remains of overnight fires on the hillsides of San Marcos, San Diego county, Calif., May 16, 2014.” (Stuart Palley—EPA) . 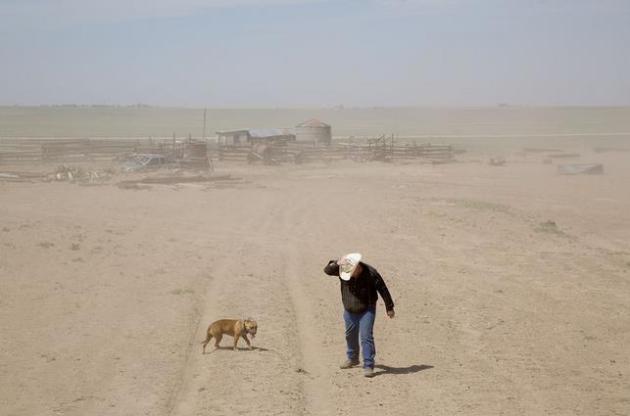 Parched: A New Dust Bowl Forms in the Heartland. Could we have another Dust Bowl similar to the extended ecological catastrophe of the 30s? Probably not, but a regional disaster is already evolving, especially Oklahoma and Texas. Here’s an excerpt fromNational Geographic: “…It is just as dry now as it was then, maybe even drier,” Fowler says. “There are going to be a lot of people out here going broke.” The climatologists who monitor the prairie states say he is right. Four years into a mean, hot drought that shows no sign of relenting, a new Dust Bowl is indeed engulfing the same region that was the geographic heart of the original. The undulating frontier where Kansas, Colorado, and the panhandles of Texas and Oklahoma converge is as dry as toast. The National Weather Service, measuring rain over 42 months, reports that parts of all five states have had less rain than what fell during a similar period in the 1930s…”

Photo credit: “A farmer walks in a dust storm on drought-stricken lands near Felt, Oklahoma, on August 1, 2013.” Photograph by Ed Kashi, VII. 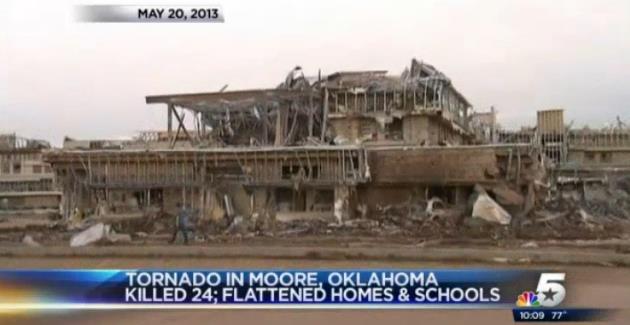 Moore Tornado Victims Rebuild With New Rules. Yes, strengthening building codes in the heart of Tornado Alley sounds like a very good idea; here’s an excerpt of a story and video at NBC 5 in Dallas: “…Burkhart’s home was one of nearly 1,200 that were damaged or destroyed. The storm generated enough debris to cover the basketball court at the American Airlines Center in Dallas in a stack nearly two miles high. Parts of Moore now look like a new housing development in North Texas. But with the new homes, come new rules. In April, Moore became the first city in the country to require all new homes to stand up to 130 mph winds with stronger frames, additional bracing and sturdier garage doors…” 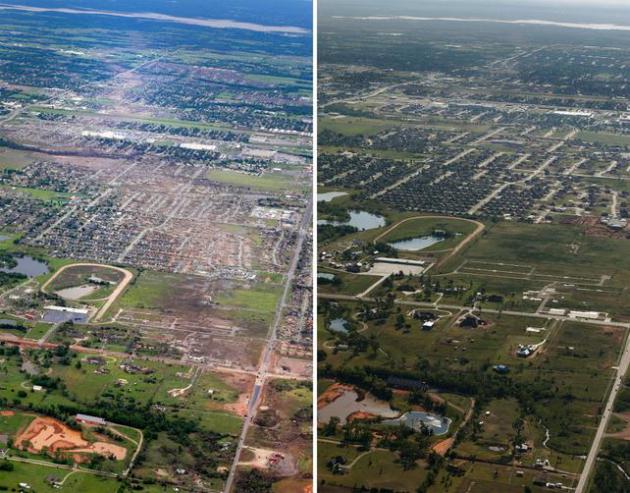 Moore Tornado Changed Reality. Many tornado survivors report symptoms very similar to PTSD, Post Traumatic Stress Disorder, the same thing returning war veterans often experience. Here’s an excerpt from enidnews.com: “…The giving of strangers has been as overwhelming as the storm,” Amber said. “Our every need has been met.” One stranger found a locket that Nathan had given Amber. Another person, who lives in Tulsa, found a sonogram picture of Zoe and Sophie in his backyard and was able to return it to the Kriesels. The aftermath of the tornado has been somewhat difficult for Zoe, Sophie and Kaley. Loud noises like trucks, wind and thunderstorms scare them. Amber described one instance during a trip to MidFirst Bank, when it began raining suddenly and her daughters began to cry and become emotionally upset…”Photo credit above: “This combination of aerial photos shows the path of destruction on May 21, 2013, the day after a massive tornado hit Moore, Okla., left, and the same view on Thursday, May 15, 2014, right.” (AP Photo). 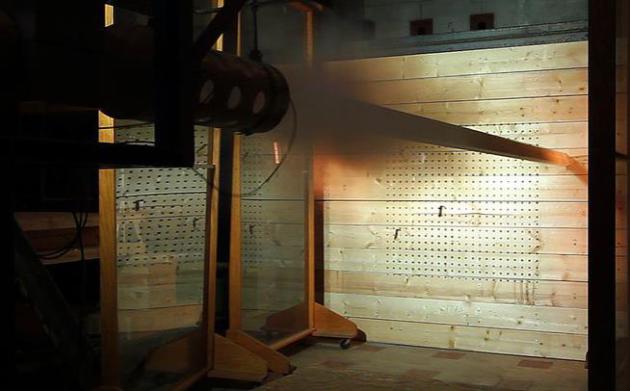 Shelter From The Storm: Cannon Blasts Test Walls for Tornado Safe Rooms. I had no idea this was going on in Madison, Wisconsin. Here’s an excerpt from a story at The Milwaukee Journal-Sentinel: “Shooting two-by-fours out of a cannon seems like a waste of perfectly good wood, but a lot can be learned from splinters that might one day save people from a tornado’s deadly debris. And to frightened folks freaking out in the middle of a tornado, it doesn’t matter what researchers do to ensure their safety, they just want to survive. In a large building at the Forest Products Laboratory in Madison, researchers are trying to simulate the effects of debris whipped by twisters. To do that, they are re-creating 250-mph winds that suck up everything in a tornado’s path and fling it in all directions…”Photo credit above: Gary Porter. “A two-by-four is shot out of a cannon to simulate debris being whipped about by 250-mph winds, during testing at Forest Products Laboratory in Madison.” 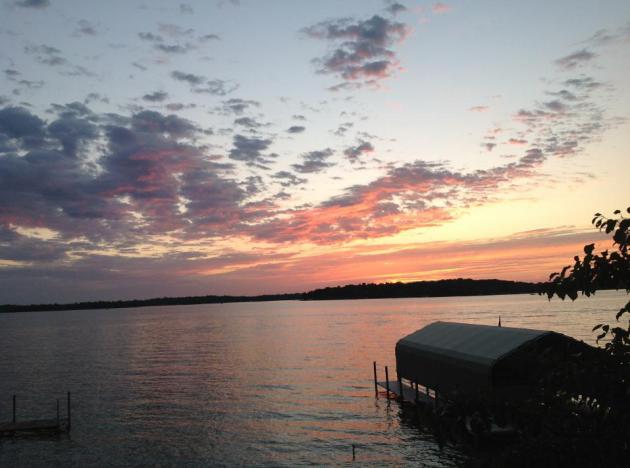