Snow and Ice Threat for the Carolinas
Severe Storm Chances in Florida Today
Winter Alerts Issued for Next Round of Snow in Colorado
Strong Winds in the Southwest Through Saturday
It's The Weekend! Here's The Weather Outlook
Multiple Clippers to Bring Snow to Northern U.S. this Weekend
All Weather News

Soaking Rain Events On The Way – March Relapse Next Week 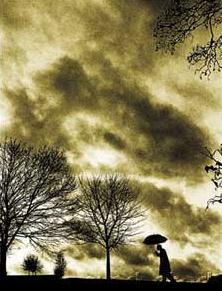 We’ve had a few warm blips (Easter Sunday was a balm for the senses) but overall a cool bias is forecast to linger into May. This, in turn, increases temperature contrasts over the lower 48 states, whipping up stronger storms, capable of pulling moisture north from the Gulf of Mexico.

Another factor: El Nino, forecast to kick in by summer, which also tends to favor cooler and wetter weather. With any luck meteorologists won’t be dragging around the D-word (drought) much longer.

Waves of Rain. GFS guidance shows heavy showers and a few T-storms pushing across the Midwest later today and Thursday; a second storm spinning up over the Midwest, Great Lakes and Ohio Valley late in the weekend and early next week. California is still too dry, but much of America east of the Rockies will see plenty of rain in the coming days. 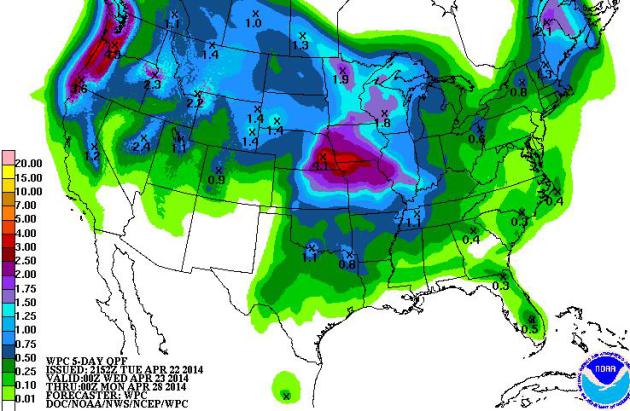 April Drenching. Some 3-4″ rains are predicted from Omaha to near Des Moines over the next 5 days, with over 1″ of rain by Sunday evening for much of Minnesota. The Pacific Northwest sees soaking 2-5″ rains capable of flash flooding. Source: NOAA HPC. 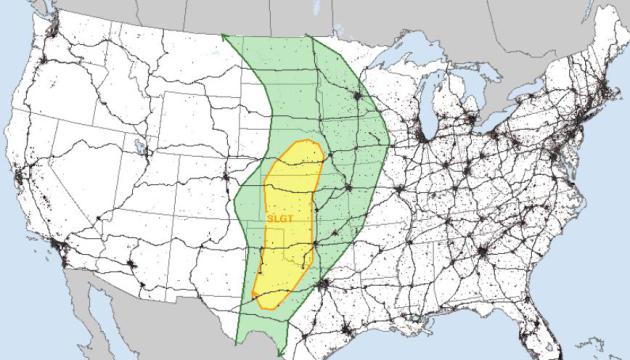 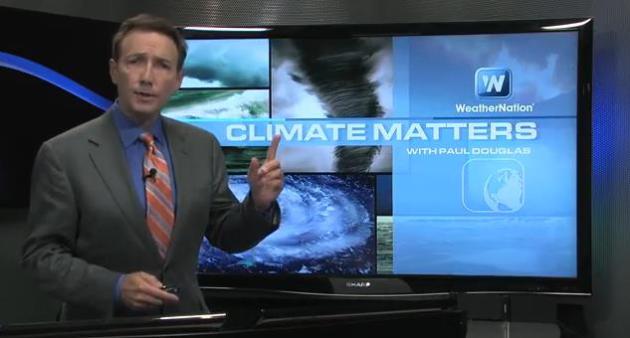 Slowest Start To U.S. Tornado Season On Record. It’s a little premature to get too complacent about a lack of major tornado outbreaks (93 so far nationwide, less than a quarter of “average”, to date). That’s the topic of today’s edition of Climate Matters: “WeatherNationTV Chief Meteorologist Paul Douglas goes over this years tornado stats. So far, we’ve been extremely lucky to see only 93 tornadoes. But in all things weather, it can change on a dime. Peak tornado months are May followed closely by June. So don’t write off tornado season yet, this could be just the beginning.” 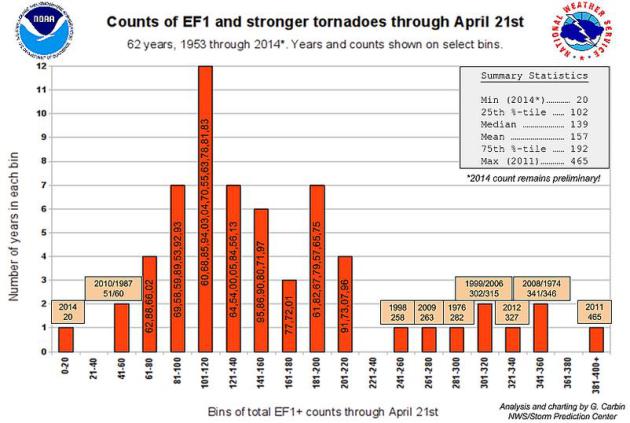 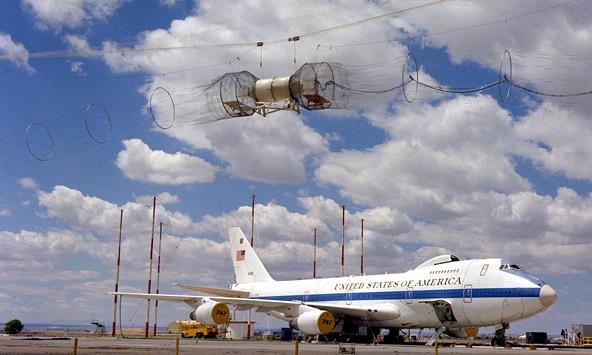 Experts: Civilians Not Ready For EMP-Caused Blackout. No kidding. Watchdog.org has the details; here’s the introduction: “The catastrophic effects of an electromagnetic pulse-caused blackout could be preventable, but experts warn the civilian world is still not ready. Peter Vincent Pry, executive director of the Task Force on National and Homeland Security and director of the U.S. Nuclear Strategy Forum, both congressional advisory boards, said the technology to avoid disaster from electromagnetic pulses exists, and upgrading the nation’s electrical grid is financially viable. “The problem is not the technology,” Pry said. “We know how to protect against it. It’s not the money, it doesn’t cost that much. The problem is the politics. It always seems to be the politics that gets in the way….” 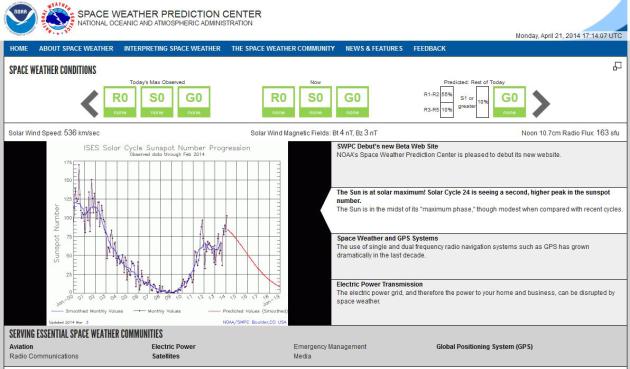 Space Weather Prediction Center. Here is NOAA SWPC’s new (beta) web site with a host of resources and tracking tools to keep an eye on the greatest potential source of dangerous EMP-like CME’s or coronal mass ejections, capable of bringing down communication systems and portions of the grid.

Waste of Space. 135 million pieces of space junk? The amount of garbage hurtling around the Earth is almost incomprehensible. If this keeps up we may resemble Saturn before long. Here’s a clip from Foreign Policy: “…There are some pertinent facts about space debris that demonstrate the pressing danger. Roughly three-quarters of all space debris — 23,000 items over 10 centimeters across, 300,000 measuring between 1 and 10 centimeters, and over 135,000,000 fragments less than 1 centimeter — is presently found in low earth orbit (LEO), the area extending from 99 to 1,200 miles above the Earth. Traveling at an average speed of 18,000 miles per hour, even small pieces of debris can damage or destroy satellites and spacecraft...” 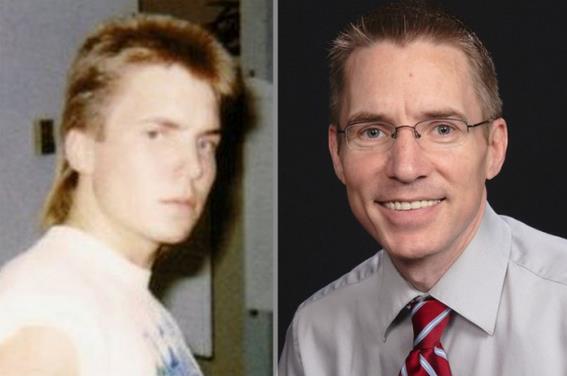 The Brain Injury That Made Me A Math Genius. Amazing, but apparently true. Salon has the remarkable story – here’s a clip: “…Because of a traumatic brain injury, the result of a brutal physical attack, I’ve been able to see these patterns for over a decade. This change in my perception was really a change in my brain function, the result of the injury and the extraordinary and mostly positive way my brain healed. All of a sudden, the patterns were just . . . there, and I realize now that my injury was a rare gift. I’m lucky to have survived, but for me, the real miracle—what really saved me—was being introduced to and almost overwhelmed by the mathematical grace of the universe…” 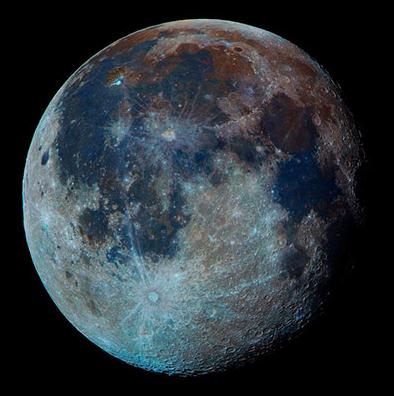 Does The Moon Influence Human Behavior? Some new research is emerging that suggests the answer is yes – staring with our sleep habits. Here’s an excerpt from a long but excellent story at Aeon: “…When volunteers in their study, whether old or young, stayed in the lab during the three or four days around the full moon, they spent five minutes longer trying to fall asleep than those who stayed in the lab during other times of the lunar month. Their full-moon sleep was 20 minutes shorter, they felt less rested, and slept 30 per cent less deeply than those who visited the lab during other times. They couldn’t see the Moon, and the researchers hadn’t even noted the Moon phase at the time…”

Which Cities Sleep In, And Which Get To Work Early? Here’s a clip from Nate Silver at FiveThirtyEight: “…How much do American cities differ in when they begin work? The Census Bureau collects data on this through the American Community Survey. This data isn’t especially user-friendly, but I figured out the median time Americans begin their workday in each metro area. All the figures that I’ll describe here refer to the location of work — not the location of residence for the workers — since some Americans commute between metro areas for their jobs…” 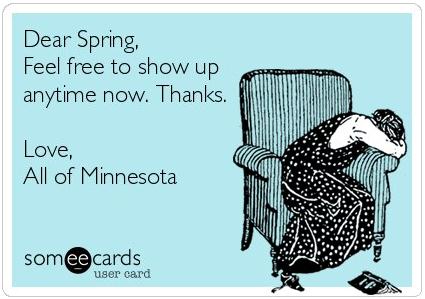 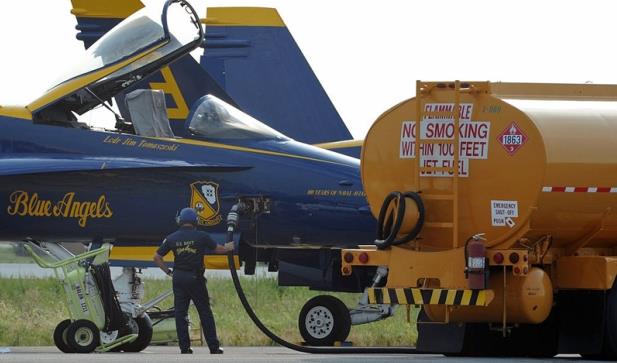 Preparing The U.S. Military For The “Threat Multiplier” Of Climate Change. Here’s a snippet from a story at Stars and Stripes that caught my eye: “…Climate change worsens the divide between haves and have-nots, hitting the poor the hardest. It can also drive up food prices and spawn mega-disasters, creating refugees and taxing the resiliency of governments. When a threat like that comes along, it’s impossible to ignore. Especially if your job is national security. In a recent interview with the blog Responding to Climate Change, retired Army Brig. Gen. Chris King laid out the military’s thinking on climate change: “This is like getting embroiled in a war that lasts 100 years. That’s the scariest thing for us. There is no exit strategy that is available for many of the problems.…”

Photo credit above: “An F/A-18 from the Blue Angels flight demonstration squadron is fueled with a 50-50 blend of biofuel and jet fuel. Experimenting with biofuels is part of the military’s push to reduce its dependence on fossil fuels.” Kiona Miller – U.S. Navy. 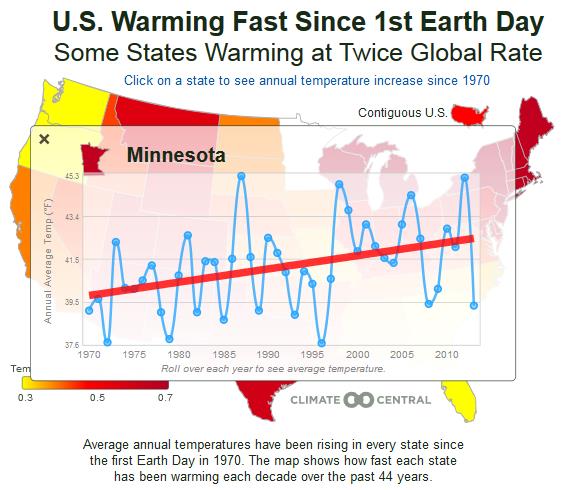 Interactive Map Shows How The U.S. Has Warmed Since The First Earth Day. Mashable has the article and interactive graphic – here’s a clipper: “Since the very first Earth Day was celebrated in the United States in 1970, average temperatures across the U.S. have increased markedly. A new interactive graphic from Climate Central, a nonprofit research and journalism organization, shows a state-by-state breakdown of those temperature trends. According to Climate Central, average temperatures in the lower 48 states have increased at a rate of about 0.13 degrees Fahrenheit per decade…”

NOAA Releases Arctic Action Plan. Details from NOAA: “Earlier this year, President Obama released a plan for moving forward on his national strategy to advance U.S. security and stewardship interests in the Arctic. Today, in keeping with the goals and tenets of his strategy, NOAA unveils its Arctic Action Plan—a document that provides NOAA scientists, stakeholders and partners a roadmap to make shared progress in monitoring, understanding, and protecting this vast, valuable, and vulnerable region. Climate change is making the Arctic a greener, warmer, and increasingly accessible place for economic opportunity. However, climate impacts such as sea ice loss and rising ocean acidification are straining coastal community resilience and sound resource stewardship. Impacts are also being studied outside the Arctic, as NOAA scientists and colleagues work to better understand the region’s influence on global weather and climate patterns…” 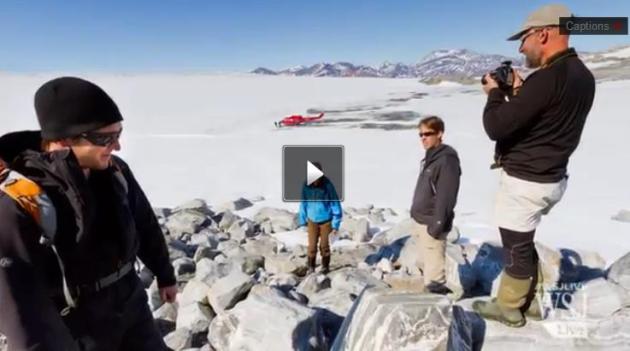 Ancient Tundra Discovered Under Greenland Ice Sheet. Extreme melting is leading to some interesting discoveries, under the ice. Here’s a video clip and explanation from The Wall Street Journal: “A team of scientists have found organic soil that has been frozen to the bottom of the Greenland Ice Sheet for 2.7 million years, providing strong evidence that the ice sheet has survived many periods of global warming.” WSJ’s Niki Blasina reports. Photo: Joshua Brown, University of Vermont. 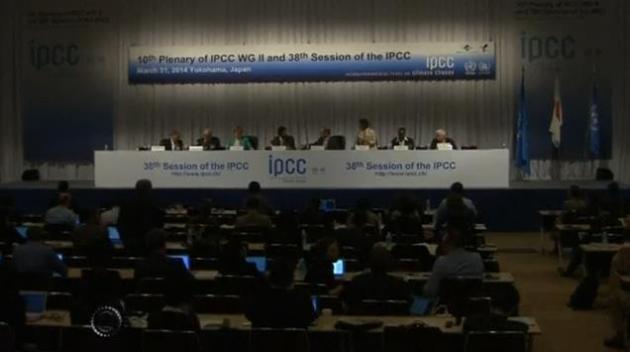 Column: Get Past Fake Debate On Global Warming. Here’s an excerpt of an Op-Ed from The Wasau Daily Herald: “… It is obvious now that no amount of scientific evidence and no degree of consensus among climate experts can shake the true denialist. It’s as if there are two parallel universes. For the denialists there is the universe created by Fox News and the Heartland Institute, and news from that world is reported Charles Krauthammer, Rush Limbaugh, and many others. In this world climate models don’t work, global warming has stopped, but if there is warming it is from natural causes, there is no scientific consensus, but if there is, tens of thousands of scientists from different countries and diverse fields are all conspiring together to create the greatest hoax the world has ever seen…”