Solar Eclipse This Weekend And A Quick Peak At Memorial Weekend 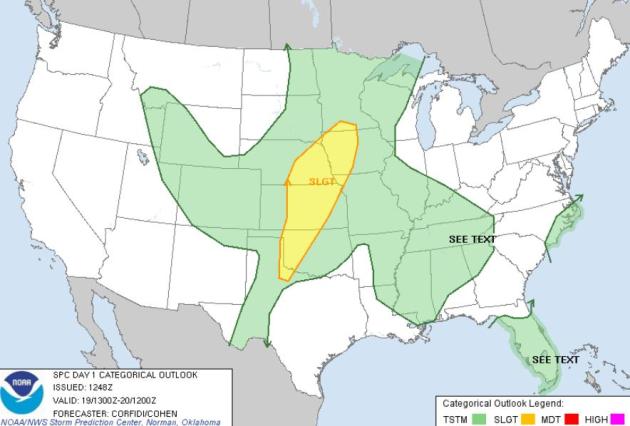 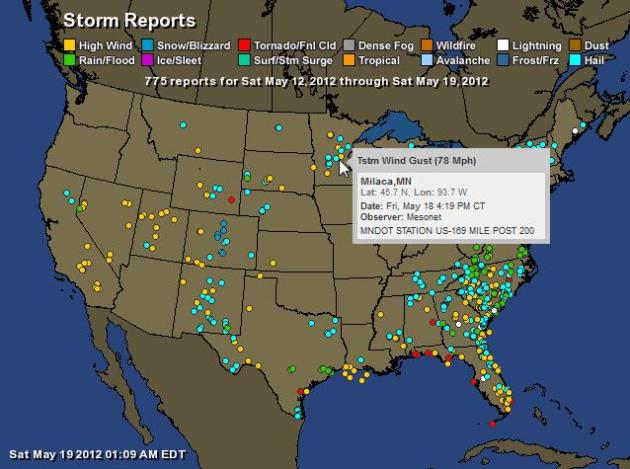 Shifting Gears (Noisily). The transition from spring to a more summerlike pattern sparked another rash of severe storms; 775 separate reports of severe weather (tornadoes, straight-line winds, hail and flooding) since May 12. Data from NOAA, an interactive map from Ham Weather is here. 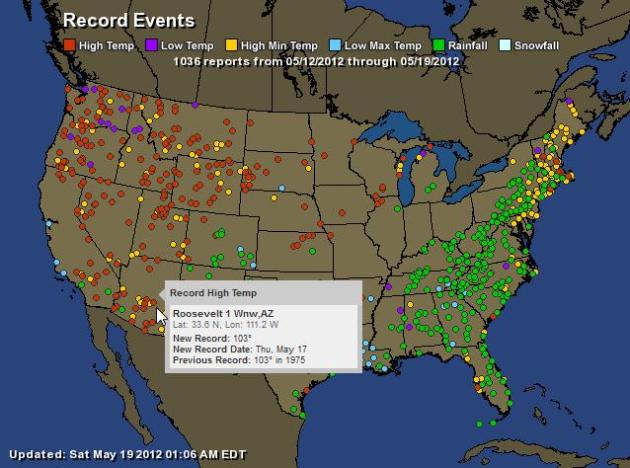 A Week’s Worth of Records. Over 1,000 daily records were set last week; extreme heat out west, record 24 hour rainfall amounts (green dots) for much of the east. Click here to see an interactive map from Ham Weather. 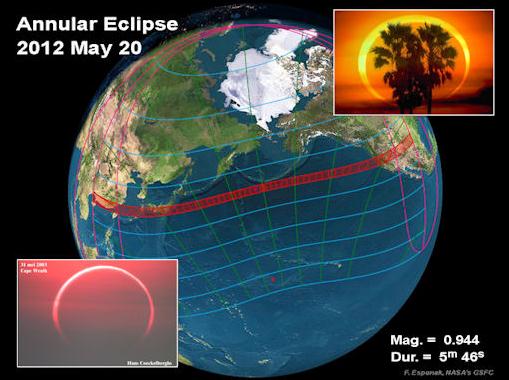 Solar Eclipse This Weekend. No, the full eclipse will not be visible in Minnesota or anywhere in the Upper Midwest. Spaceweather.com has more details; here’s an excerpt: “…An animated eclipse map prepared by Larry Koehn of ShadowandSubstance.com shows the best times to look. In the United States, the eclipse begins at 5:30 pm PDT and lasts for two hours. Around 6:30 pm PDT, the afternoon sun will become a luminous ring in places such as Medford, Oregon; Chico, California; Reno, Nevada; St. George, Utah; Albuquerque, New Mexico, and Lubbock, Texas. Outside the narrow center line, the eclipse will be partial. Observers almost everywhere west of the Mississippi will see a crescent-shaped sun as the Moon passes by off-center.” 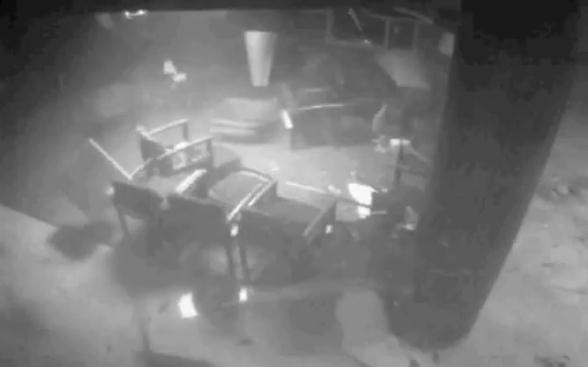 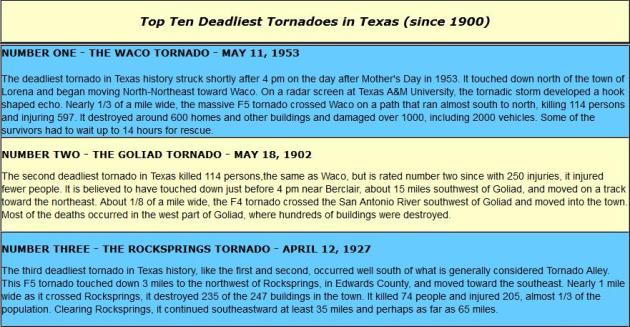 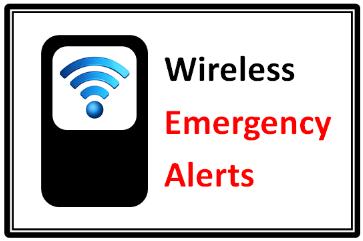 Wireless Emergency Alerts On Your Wireless Device. Shortly, you’ll be able to sign up for (free) alerts on your cell phone, courtesy of NOAA. More details: “The wireless industry, the FCC, and FEMA will roll out the WEA’s (Weather Emergency Alerts) system nationwide this year. The NWS will start utilizing this by pushing extreme weather warnings over the system in June 2012. Tornado warnings, flash flood warnings and several other high-end warnings will go directly to wireless users in an affected county automatically if their device is compatible.”

“Mobile users will not be charged for receiving these text-like alerts and are automatically enrolled to receive them.

There are three different kinds of alerts: 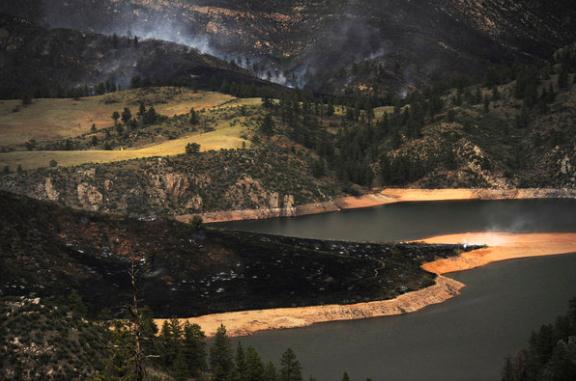 Western Wildfires: Colorado Declares Emergency In Hewlett Blaze. Fire season is starting early this year, an unusual number of large blazes for May. At this rate it’s going to be a long, hot, fiery summer for much of the western half of the USA. The L.A. Times has a harrowing story; here’s an excerpt: “The Hewlett fire in Colorado has grown to 7,673 acres, prompting officials Friday to declare an emergency. In an executive order, Colorado Gov. John Hickenlooper declared the emergency because of the fire in Larimer County. The move makes $3 million in state emergency funds available for firefighting. “The Hewlett Fire’s proximity to numerous homes and property poses an imminent danger to life and property and, therefore, constitutes a disaster for the purposes of the act,” according to the executive order.”

Photo credit: “The Hewlett fire burns to the edge of Seaman Reservoir in Poudre Canyon near Ft. Collins, Colo., on Thursday. Hundreds of firefighters worked to combat the growing blaze. (R.J. Sangosti / The Denver Post / May 18, 2012).” 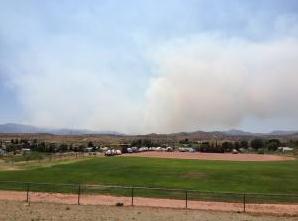 “Gladiator Blaze” Update. This is one of the larger, more stubborn wildfires being reported in Arizona. Details from inciweb.org: “The Gladiator Fire was reported on Sunday, May 13, at 11:00 am near community of Crown King. The human caused fire which originated from a structure fire on private property has now moved onto the Prescott National Forest. Joe Reinarz’s Southwest Area Type 1 Incident Management Team assumed management of the Gladiator Fire on the evening of Monday, May 14, 2012.” 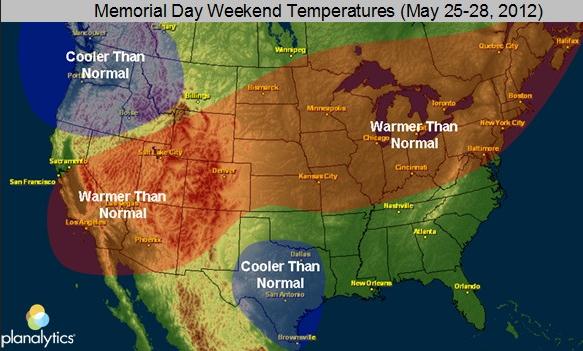 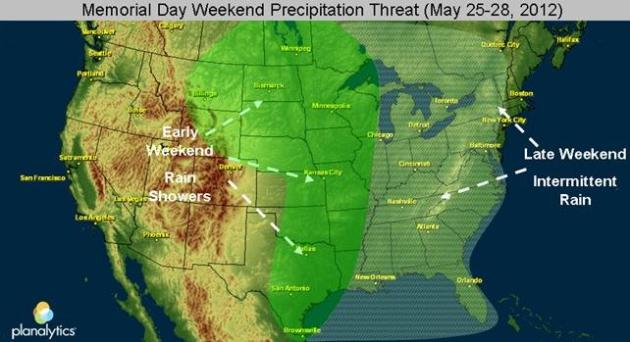 Memorial Weekend Preview. If you believe the European ECMWF model, much of the Upper Midwest may be experiencing 90s next weekend – a taste of mid-summer. I wouldn’t bet the farm on that extended outlook just yet, but maybe we’ll make up for this weekend’s puddles (and Sunday jackets). Maps above for the Memorial Weekend Temperatures and Precipitation courtesy of Planalytics. 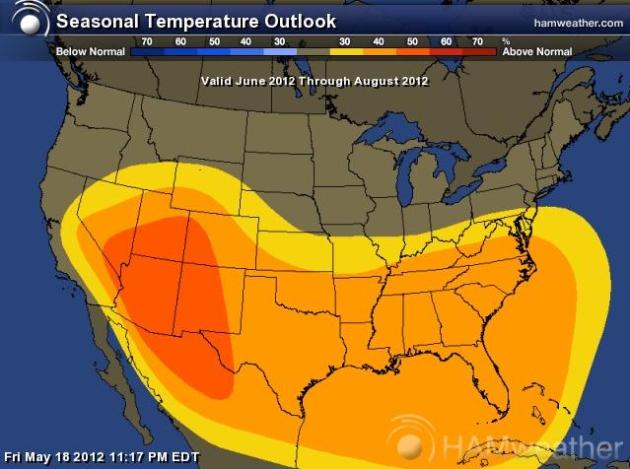 Very Extended Outlook. It looks like a very long, hot summer for the southern half of the USA, a strong bias toward (much) warmer than normal temperatures from June through August for much of the Southwest. Map courtesy of NOAA’s CPC (Climate Prediction Center) and Ham Weather. 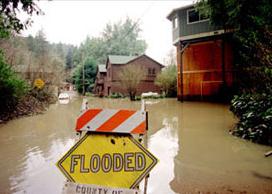 Pennsylvania Passes Flooding Law. I found this interesting: “Pennsylvania passed a law that if someone drives around a flood barricade, the fine is $250. If the driver’s car stalls and emergency responders are needed, the fine is no more than $500 and the driver’s license will be suspended for no more than 90 days. The law passed with an unanimous vote of 197- 0. The bill can be seen in the link below.”