15 Aug 2013, 5:47 am
Share:
The New Abnormal
Residents of Brimson, Minnesota, just inland from Two Harbors, woke up to a jaw-dropping low of 30F Wednesday morning – chilliest reading in the lower 48 states. A week from now Brimson and much of Minnesota will see highs near 90F. Remarkable.
We’ve always been pushed around by cold fronts and heat spikes but the last few years have brought even steeper curves on a global temperature roller coaster ride. The greater the temperature swings the higher the potential for memorable storms.
Former Energy Secretary Bill Richardson writes “Since 2011 the USA has experienced 25 extreme weather events that each caused more than $1 billion in damages. These events contributed to the loss of more than 1,000 lives and each American family paying $400 more per year”.
A symptom of more heat and energy in the system? Probably.
Wave goodbye to the Dog Days of September; we heat up into the 80s this weekend – 90F possible early next week as dew points climb into the mid 60s, up in the oh-zone. Most of us won’t see T-storms until next Wednesday. No frost, hail or hurricanes either.
We’re watching the tropics; there’s a risk that an area of concern may become a hurricane and track toward New Orleans. 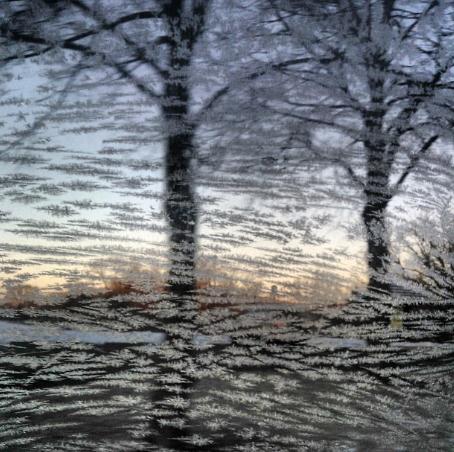 An August To Remember. Check out the morning lows Wednesday across northeastern Minnesota, courtesy of NOAA:

Warming Trend Central USA. The 84 hour NAM model shows a retreating high pressure bubble turning on more of a southerly breeze from Kansas City to the Twin Cities, meaning a slow warm-up into the weekend. Heavy showers and T-storms linger along a stalled front draped over the Southeast, while a tropical system crosses the Yucatan Peninsula, pushing into the Gulf of Mexico. Loop: NOAA. 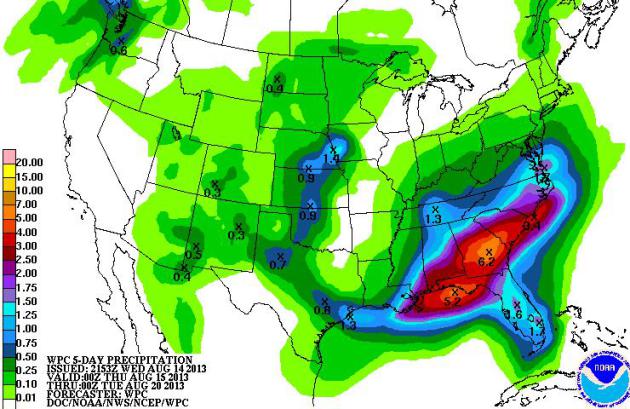 Flash Flood Potential. The 5-Day rainfall prediction from NOAA HPC shows some 5-6″ amounts from near Pensacola to Augusta and Charleston, meaning more flash flooding over the Southeast. If the tropical system we’re watching does push toward Louisiana or Alabama some towns could see in excess of 10-15″ rain in the next week. 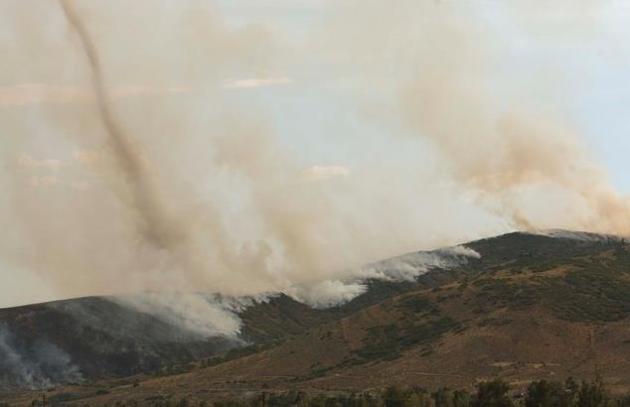 Fire Whirls: A Tornado-like Sign Of An Extreme Wildfire. You thought a tornado was scary? How ’bout a tornado composed of fire and smoke? Here’s an excerpt of a remarkable story at The Salt Lake Tribune: “Consuming as many as 15 homes, it seemed the rapidly moving Rockport 5 Fire that forced evacuations in Summit County Tuesday couldn’t get any worse. Then people started seeing something else: giant funnel clouds of fire and smoke rising out from the depths of the flames. They’re called fire whirls, and they’re a sign that the fire is taking control. The whirls happen when extreme heat meets high winds within a very healthy wildfire. The two forces combine to form small whirls that consume smoke and even flames, according to Monica Traphagan of the National Weather Service in Salt Lake City. “You’re seeing a fire sort of create its own weather,” Traphagan said…”

Photo credit above: Leah Hogsten | The Salt Lake Tribune) “A wildfire in Summit County has forced an evacuation of a community and destroyed up to 15 homes as flames continued spreading Tuesday evening. The fire is across the road from Lake Rockport Estates, which runs adjacent to State Road 32 near hamlets of Coalville and Wanship. Residents there were ordered to evacuate Tuesday, August 13, 2013.” 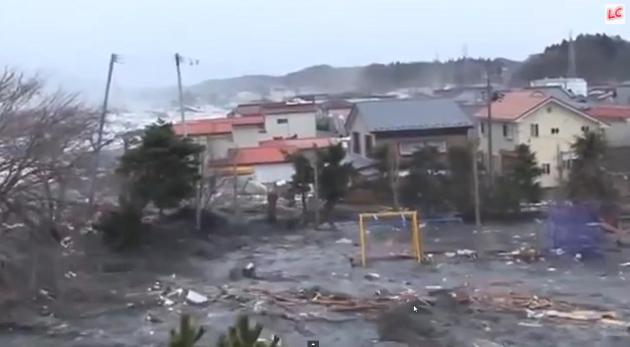 Shocking New Footage Of Japan Tsunami. This video clip runs 25 minutes, but it’s one of the more amazing things I’ve ever seen, from a little ripple of water coming up the river to chunks of the town sweeping past at 30-40 mph minutes later. This captures the slow-motion horror of a tsunami better than anything I’ve ever witnessed. Here’s a link to the video and explanation from wtop.com: “It can be hard to fathom the sheer power of mother nature. A horrifying video has emerged capturing the Japan tsunami from the moment the water begins to rise. The video, which appeared on RedFlagNews.com, shows how quickly conditions can change.” 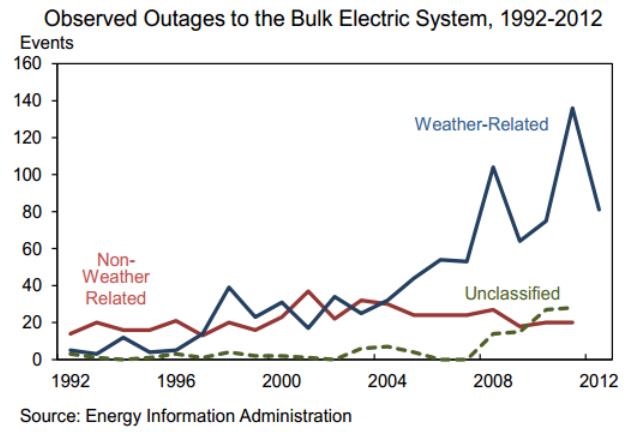 Why Blackouts Are Becoming More Common, In Two Charts. The Washington Post is running the story – here’s the introduction: “The Department of Energy has a new report (pdf) out taking a look at the vulnerability of the U.S. power grid to blackouts. One notable fact: Outages caused by severe weather have become much more common over the past decade. Power outages of all sorts are becoming more frequent since 1992, but the real action has come from weather-related outages. The report notes that “thunderstorms, hurricanes and blizzards account for 58 percent of outages observed since 2002 and 87 percent of outages affecting 50,000 or more customers.” (The rest are caused by things like “operational failures, equipment malfunctions, circuit overloads, vehicle accidents, fuel supply deficiencies and load shedding — which occurs when the grid is intentionally shut down to contain the spread of an ongoing power outage.”)… 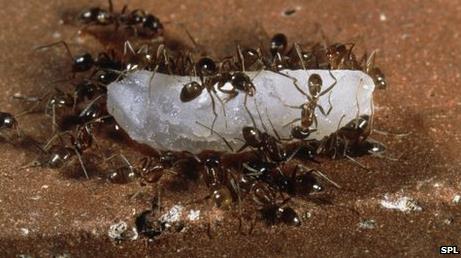 Invasive Ants: “Stowaway” Insects Spreading Around World. The BBC has the story; here’s the introduction: “A Spanish team of scientists has found that larger than expected numbers of the insects are being unwittingly shipped around the world. The researchers warn that many of these species are establishing colonies in their new habitats that could pose a threat to the environment, infrastructure and human health. The research is published in the journal Royal Society Biology Letters. Lead author Veronica Miravete, from the University of Gerona in Spain, said: “Due to their small size, most ants are transported involuntarily in containers and other boxes, together with soil, wood, ornamental plants and fruits etc, on ships or airplanes…”

Photo credit above: “Argentine ants have spread across Europe, but there are many more alien species.” 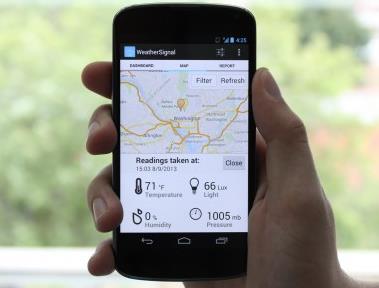 Smartphone Batteries Used To Determine Weather Conditions. Here’s a novel application – now we’re all potential walking, talking (mobile) weather observations. Here’s an excerpt from Gizmag: “Smartphone batteries contain tiny temperature sensors, designed to keep the phone from overheating. While those sensors do measure the heat generated within the phone, their readings are also affected by the temperature of the phone’s external environment. With that in mind, British app developer OpenSignal has created a system that allows multiple users’ phones to provide real-time, location-specific weather reports. The system is based around the company’s existing OpenSignal app, which was designed to collect data sent voluntarily from users’ Android phones in order to create maps of Wi-Fi access points and phone coverage…”

Tents Get Wired For Taking Technology Camping. Kind of defeats the purpose of “camping”, but who am I to judge? Gizmag.com has details; here’s an excerpt: “There are those for whom ditching the modern comforts of home and roughing it is one of the main attractions of camping. For such people, the traditional tent will likely do. But there is another breed of campers that can’t stand to be separated from their technology, be it digital music, videos, tablet computers, drink blenders, etc. For them, there’s a new generation of high-tech tents wired to power all the latest portable gadgetry…” 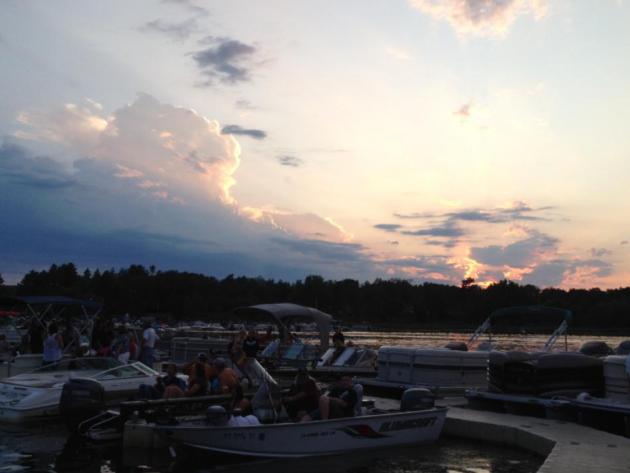 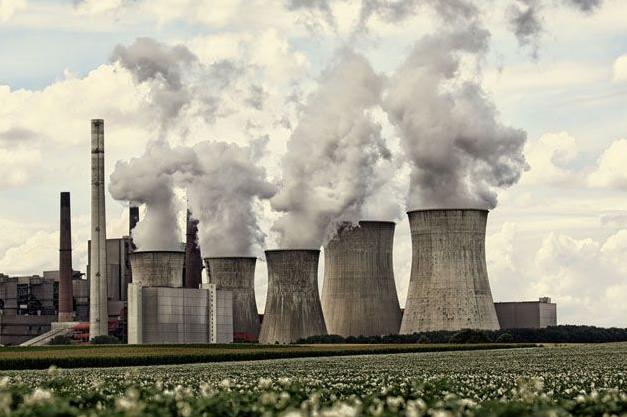 The Complexities Of Climate Change. Here’s an excerpt of a story at The Atlantic and Mother Jones: “If we’re to avoid destructive climate fluctuations, scientists say we need to slow, and eventually halt, the emission of greenhouse gases that do and will continue to produce global warming. A big chunk of our emissions come from the consumption of the fossil fuels — the coal, oil and gas that remain a crucial part of keeping the modern economy running. Not an easy task. Let’s look at which fuels, and countries, produce the highest levels of carbon dioxide pollution, and how we can try to rein these emissions in. In the United States green advocates are concerned about the climate impacts of all manner of new fossil fuel developments, but there is one culprit that stands above the rest. Potential emissions from increased oil production, more shale gas drilling, new pipelines, and exotic fuels pale in comparison to the possible carbon impact from coal reserves…” 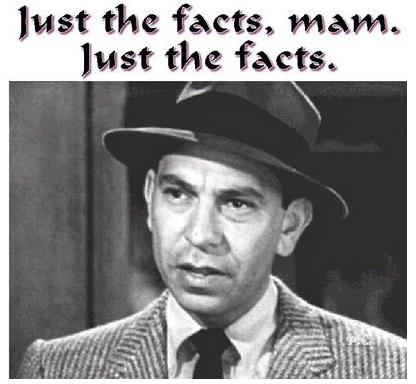 The Futility Of “Just The Facts” Climate Science. Here’s a clip from a thoughtful story by David Roberts at Grist: “…Anyway, a democratic public does not want bare facts. It wants meaning. It wants to know why climate science matters and what can be done about it. More fundamentally, it’s not just that people want meaning, it’s that they only absorb facts through meaning. Our identities are how we make sense of information. This is the whole point of cultural cognition research: We seek out information that reinforces our identities…” 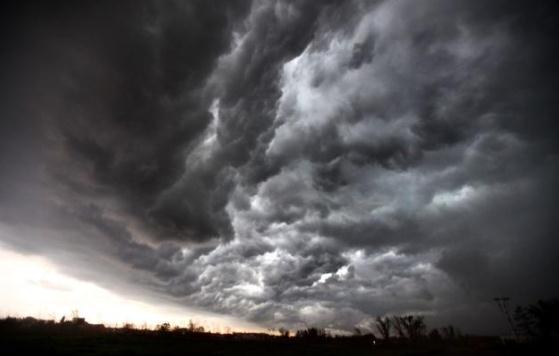 MSNBC’s Chris Hayes On Why So Many Conservatives Deny The Climate Problem: They Hate The Solution. The “solution” being bigger government. And yet if we don’t take some measures now, put a price on carbon pollution, and incentivize the marketplace to help with mitigation, we’ll be forced to take more drastic, expensive and intrustive measures as we try to adapt to rising sea level and more extremes. A bit of a paradox. Here’s an excerpt from Think Progress: “…I have made a different argument: If you hate government intrusion into people’s lives, you’d better stop catastrophic global warming, because nothing drives a country more towards activist government than scarcity and deprivation. Real adaptation requires much bigger and far more intrusive government than mitigation. Indeed, if the anti-science ideologues continue to stop serious mitigation, then the government will inevitably get into the business of telling people where they can and can’t live (can’t let people keep rebuilding in the ever-spreading flood plains or the ever-enlarging areas threatened by sea level rise and Dust-Bowlification) and how they can live (sharp water curtailment in the SW Dust Bowl, for instance) and possibly what they can eat. Conservative opposition to serious climate action now will force big government in coming decades to triage our major coastal cities — Key West and Galveston and probably New Orleans would be unsavable, but what about Miami and Houston? (See Don’t believe in global warming? That’s not very conservative.)…” 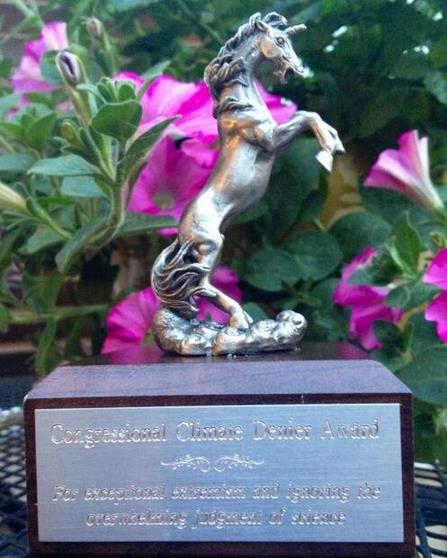 Unicorns Doled Out For Climate Change Deniers. Here’s a clip from a story at CNN: “As part of their push to promote President Barack Obama’s climate change agenda, the political group formed from his presidential campaign is going after Republican lawmakers who have expressed skepticism of climate change. The group sent a message on Twitter Tuesday with a photo of a “climate denier award” trophy, topped by a unicorn. The group’s volunteers are delivering the statues to lawmakers Tuesday…”