A Pacific Breeze. The last vestiges of the much-hyped Polar Vortex are shrinking north. And that’s the thing about cold air. Warm air can’t just push it out of the way. The chill needs to retreat on its own, and that’s happening as steering winds become more westerly (more often) and a higher sun angle begins to erode the core of the coldest air. Temperatures reach 60F Monday as north as Des Moines (little snow cover helps) with 70s over the central Plains. Spring is coming. 2-meter NAM temperature forecast courtesy of NOAA and Ham Weather. 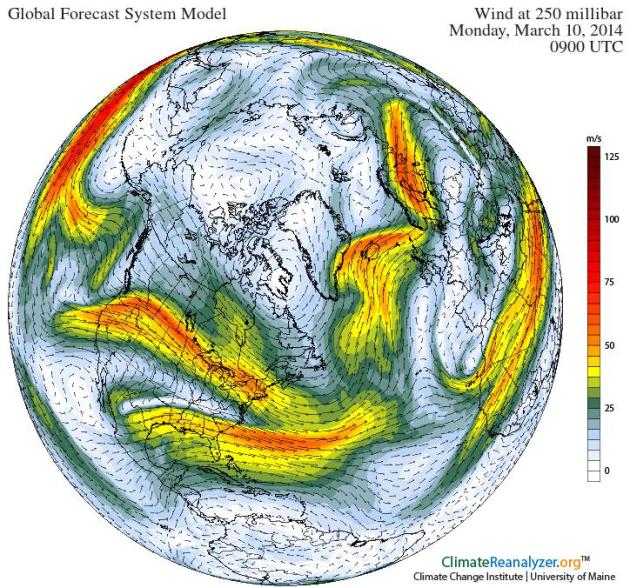 Cheap Applause For A Zonal Flow. No longer are upper level steering currents howling from the Yukon or Arctic Circle. Winds aloft (above) today are pumping in milder, Pacific air, and the result will be warmer than average temperatures much of this week. Map: Climate Reanalyzer. 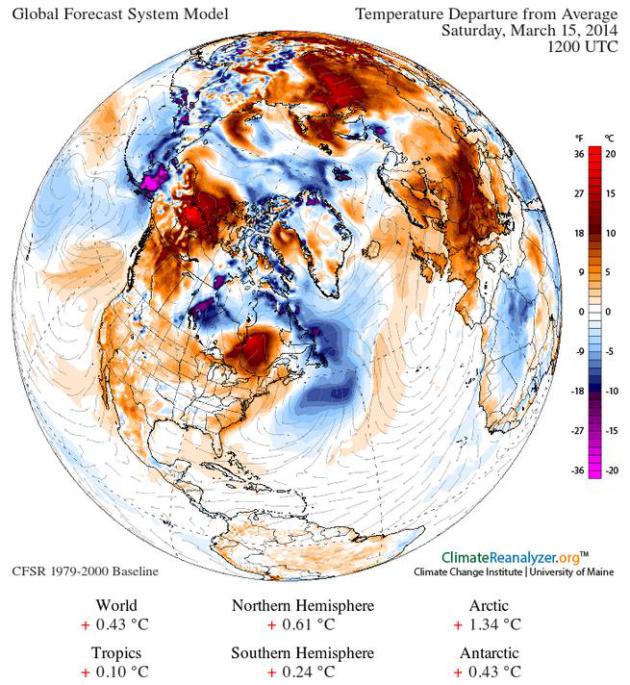 Saturday Outlook. Temperature anomalies Saturday show the cold pool shrinking over Canada, unusually warm weather over western Canada. In fact the entire Northern Hemisphere is forecast to be 1F warmer than average (for March 15), the Arctic over 2F. warmer than long-term averages – a trend we’ve seen much of the winter. 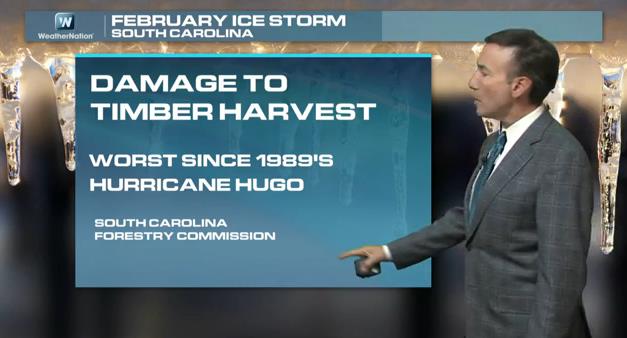 Super-Sized Winter of 2014: Ice More Damaging Than Snow. Snow gets much of the national media attention, but ice is far more dangerous and damaging, sparking more accidents, roof collapses and downed tree limbs and power lines. That’s the subject of today’s edition of Climate Matters: “Yes, this has been a jaw-dropping, super-sized, winter on steroids winter east of the Rockies.” — Meteorologist Paul Douglas said. A crazy winter it has been for much of the U.S. as snow, ice and freezing rain continues into March. The Great Lakes are breaking ice-cover records and snow covered 54% of the U.S. as of Tuesday, the most since 1978. It has been a wild one.” 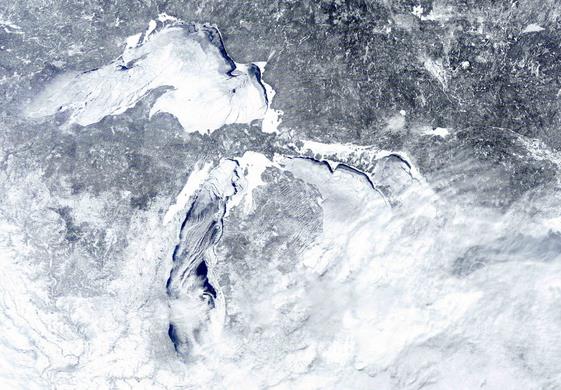 Snow, Ice Cover Will Boost Great Lakes Water Levels. AP has the article – here’s a link and excerpt: “Water levels in the Great Lakes are expected to continue a steady recovery this year, courtesy of widespread ice cover that is slowing evaporation and snowfall that has approached record amounts in some cities, federal experts said Wednesday. The siege of polar air that has gripped the region this winter has caused the most extensive freeze-over of the lakes since the record-setting year of 1979, when nearly 95 percent of their surface area solidified. On Tuesday, the ice cover reached its highest point since then – 91 percent, said George Leshkevich, a physical scientist with the federal Great Lakes Environmental Research Laboratory in Ann Arbor...” 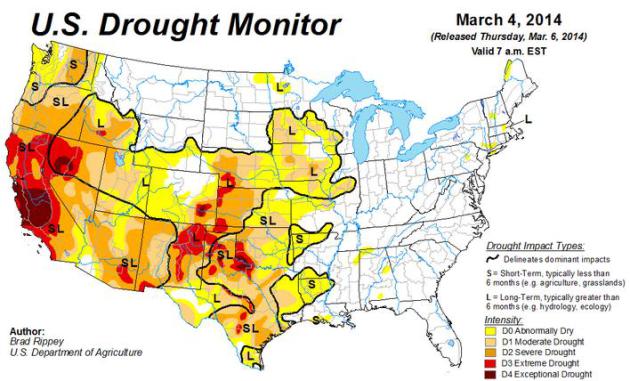 Trapped In A Devastating Drought, California Needs To Take On Some Surprising Sacred Cows. Here’s a clip from a story at New Republic which puts the the drought into stark perspective: “…Today in California, a different kind of resource shock is unfolding, and it too may end up, a generation hence, defining an era. This time the resource is water, not oil. Today’s California drought is starting to force similarly life-changing choices, this time in the nation’s most populous state, long a bellwether and, according to some counts, the world’s eighth largest economy. The land of milk and honey has begun in recent weeks to get serious about its water crisis: Farmers are ripping out crops, religious believers are praying for rain, and local governments are ordering restaurants to stop serving glasses of water except to diners who specifically request them. This comes at a time when America’s domestic supply of the natural resource it has cared most about—fossil fuel—is more plentiful than ever…” 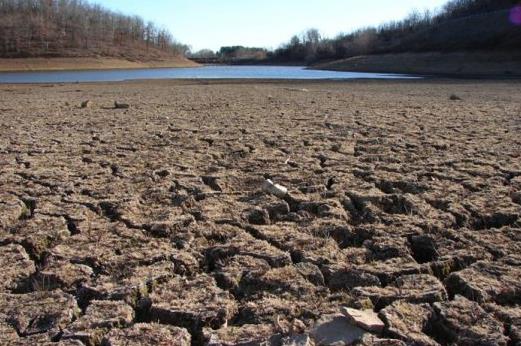 Climatologist Who Predicted California Drought 10 years Ago Says It May Soon Be “Even More Dire”. Joe Romm at Think Progress delves into the California drought, how much is natural vs. influenced by changes in the Arctic (melting ice) and changes in the upper level steering winds – what one meteorologist dubbed a “ridiculously resilient ridge” of high pressure that has nudged storms away from the west coast – fairly consistently – for nearly 3 years now. How is a warming climate and changes in far northern latitudes impacting the drought? Here’s an excerpt:
“…These four mechanisms are:
In a warming world, a larger fraction of total precipitation falls in downpours, which means a larger fraction is lost to storm runoff (as opposed to being absorbed in soil).
In mountain regions that are warming, as most are, a larger fraction of precipitation falls as rain rather than as snow, which means lower stream flows in spring and summer.
What snowpack there is melts earlier in a warming world, further reducing flows later in the year.
Where temperatures are higher, losses of water from soil and reservoirs due to evaporation are likewise higher than they would otherwise be…” 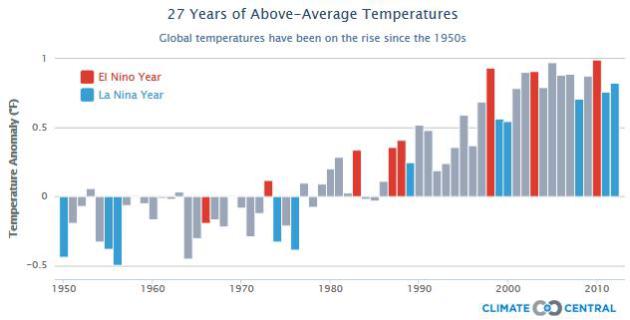 Get Ready For The Next Climate Phenomenon: El Nino. As we told you yesterday the probabilities of lurching into an El Nino warming phase of the Pacific are increasing for later in 2014. The implications for Minnesota and the rest of the nation? Here’s an excerpt from Climate Central: “…An El Niño increases the likelihood of wet conditions in California and the Southwest, which could provide relief to areas suffering through severe drought. Warm conditions are also more likely in the Northeast. That’s welcome news for a region where teeth have been chattering all winter. The Eastern Seaboard could also see the major hurricane drought stretch for another year as El Niño tends to inhibit the formation of Atlantic Hurricanes. The last official major hurricane to make landfall in the U.S. was Hurricane Wilma in 2005…” 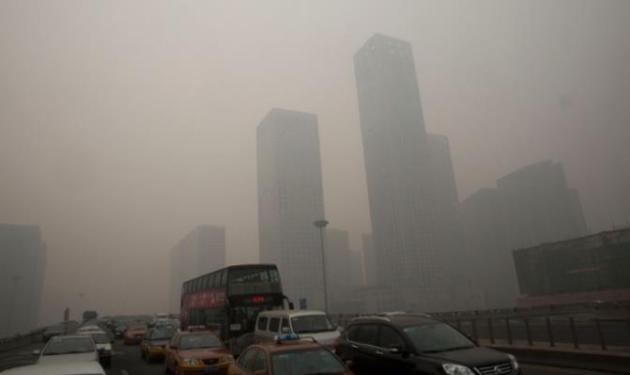 Surviving Beijing’s Pollution While Pregnant: “I Feel Like A Lab Rat”. Not a good time to be working in China’s largest, most polluted cities – unless you’re armed with face masks and air purifiers. The Guardian has the story – here’s an excerpt: “…As someone who grew up in Beijing in the 1990s myself, the deterioration in air quality there is startling – blue skies were once the norm. Not being able to see beyond a certain building in the distance is now today’s reality, though, with readings based on the Air Quality Index (AQI) skyrocketing beyond 500 on the worst-hit days, over 20 times the level set by the WHO. But the difference in how it potentially affects us is stark – Xiaoxia is eight months pregnant...”

Photo credit: “Vehicles clog a highway during a hazy day in Beijing at the end of February.” Photograph: Ng Han Guan/AP 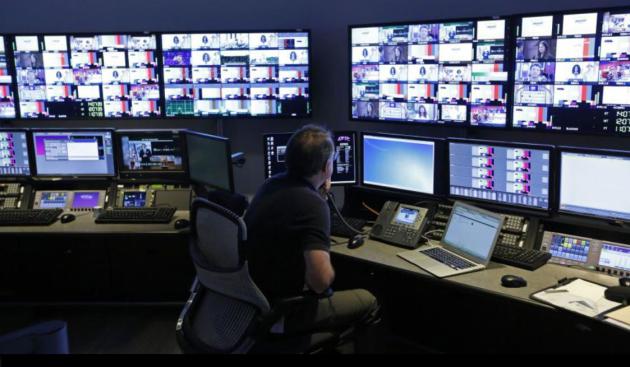 The Future Of TV Is Coming Into Focus, And Looks Pretty Great. Will every show you care about eventually be delivered online, and on-demand? What will this do to traditional network TV schedules? Are we heading to more of a Netflix model for most of our entertainment? Quartz has a thought-provoking article; here’s the introduction: “The future of TV is here. It’s just not evenly distributed.  If it doesn’t seem like the American television industry is in the middle of a dramatic transformation, that’s simply because the pieces are scattered all over the place. But they are starting to come together. One transformative piece arrived earlier this week, when Dish Network secured the rights to include ABC, ESPN, and other popular channels owned by Disney in a TV service delivered entirely over the internet. Negotiating deals like that one has generally been the biggest impediment to internet TV in the United States…”

Photo credit above: “It’s all controlled by this guy.” Reuters/Joe Skipper. 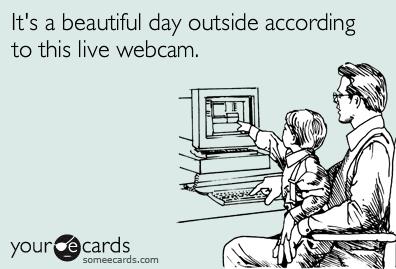