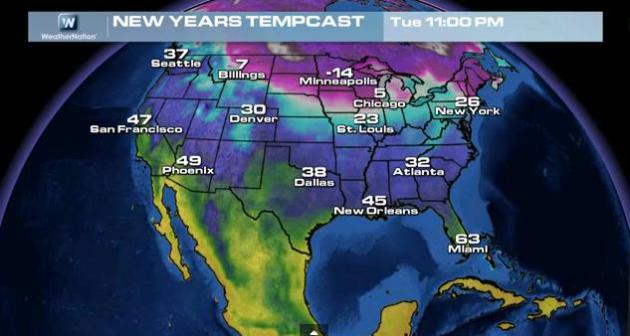 New Year’s Eve Preview. In today’s edition of Climate Matters we track violent storms slamming into the British Isles, record warmth for southern California, air stagnation in the Bay area (where the dry, sunny rut continues) and glaze ice headaches for much of Lower Michigan in the wake of last weekend’s “Solstice Storm”. Soaking rains are likely along the eastern seaboard by Sunday, followed by one of the coldest outbreaks of winter for the northern third of the USA next week. 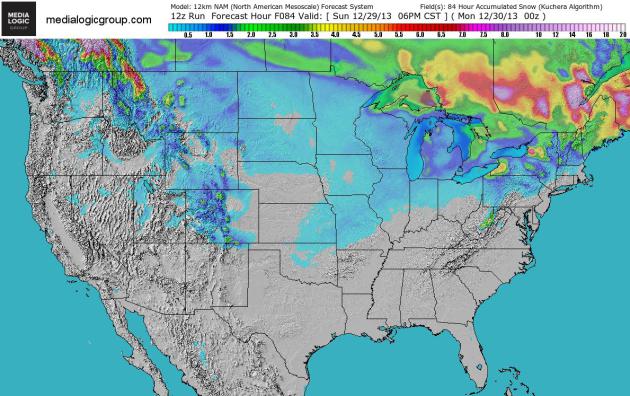 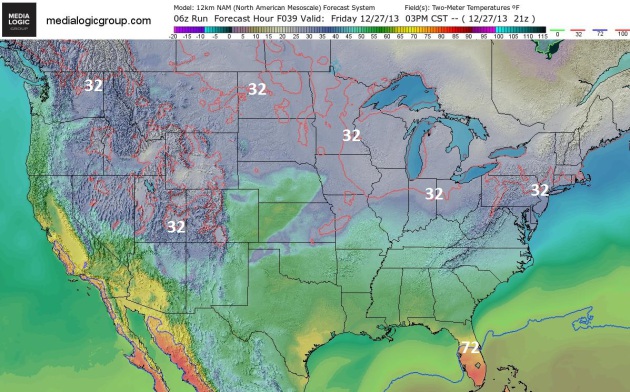 3 PM Friday. Old Man Winter is (temporarily) tiring of flinging subzero airmasses south of the Canadian border. A brief respite is likely into Saturday across the northern tier of the USA; 3 pm temperatures showing readings above freezing south of a line from Hartford to Wilkes Barre, South Bend, the Twin Cities and Bismarck. Map: NOAA and Ham Weather. 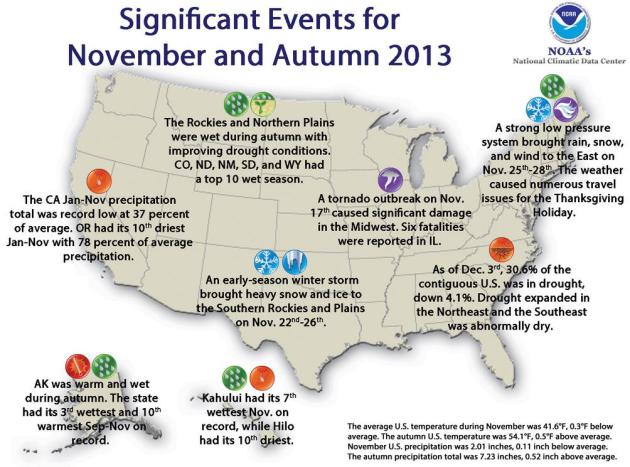 Climate Highlights – November. Here’s an excerpt of a look back at November (and all of autumn) across the USA from NOAA: “ 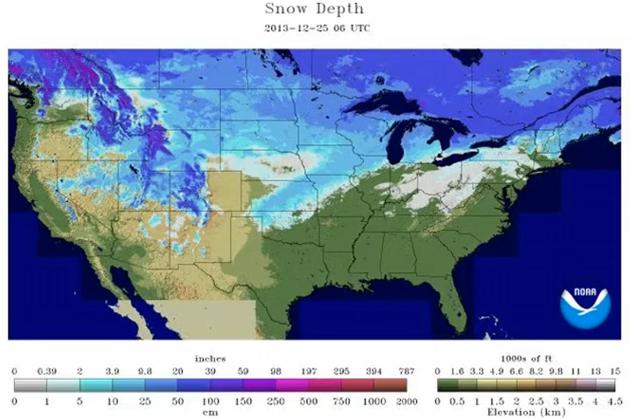 86 Days Of U.S. Snowcover In One Minute. Check out the changes since October 1 across America, courtesy of NOAA and Rebel Mouse. 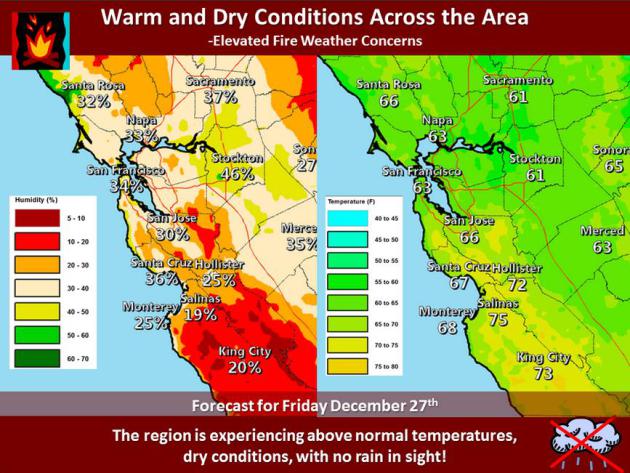 Elevated Fire Risk Bay Area. While polar air invades the Upper Midwest and Great Lakes, spinning up a parade of East Coast storms in the coming days, the West Coast remains unusually quiet, sunny, mild and very dry. California is experiencing the driest year in state history – it’s unusual to be tracking wildfires in late December (when storms should be sweeping in off the Pacific). Graphic: National Weather Service. 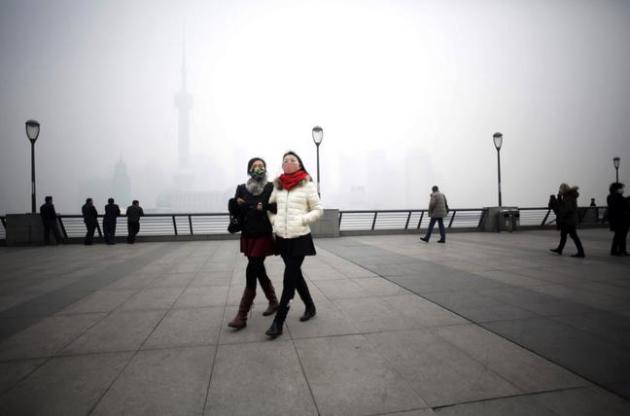 Shanghail Warns Children To Stay Indoors On Haze, PM2.5 Surge. The air quality doesn’t seem to be improving much across northern China. Here’s an excerpt of an story at Bloomberg: “Shanghai warned children and the elderly to stay indoors as smog enveloped China’s commercial hub, sending levels of the worst pollutants surging to more than 15 times World Health Organization guidelines. The level of PM2.5 pollutants reached 395.7 micrograms per cubic meter at 3 p.m., the city’s environmental monitoring center said. The WHO recommends exposure of no more than 25 over a 24-hour period for particles smaller than 2.5 microns in diameter that are more dangerous than other particulate matter...”

Bimby: Your Own Personal Robotic Kitchen Helper. Not sure if this amazing kitchen contraption is coming to the USA anytime soon, but check out the video, and what Europeans are willing to spend to make their lives a little simpler, courtesy of The Wall Street Journal: “…Bimby, a German-made cooking robot, has become an obsession in Western Europe’s poorest country by promising to make cooking cheap and easy. Bimby looks like a food processor with a stainless-steel container and a steaming unit that weighs ingredients, chops, grates, blends, beats, mixes and cooks, all under the control of a timer that lets the cook step away from the kitchen until the food is ready….” 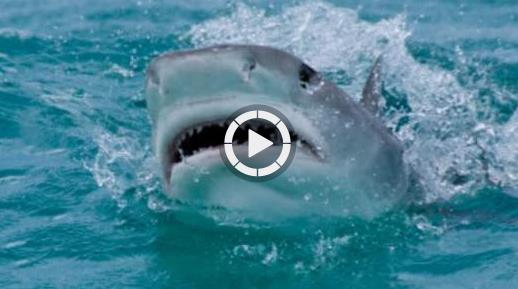 Australia: Sharks Use Twitter To Warn Swimmers. This may be the most innovative (and unnerving) use of Twitter I’ve seen yet; here’s an excerpt and video clip from Sky News: “…Scientists have attached transmitters to more than 320 sharks, including great whites, which monitor their movements up and down the coast. When a tagged shark swims within about a kilometre of a beach, it triggers an alert which is picked up by computer. That computer then instantly turns the shark’s signal into a short message onSurf Life Saving Western Australia’s (SLSWA) Twitter feed...” 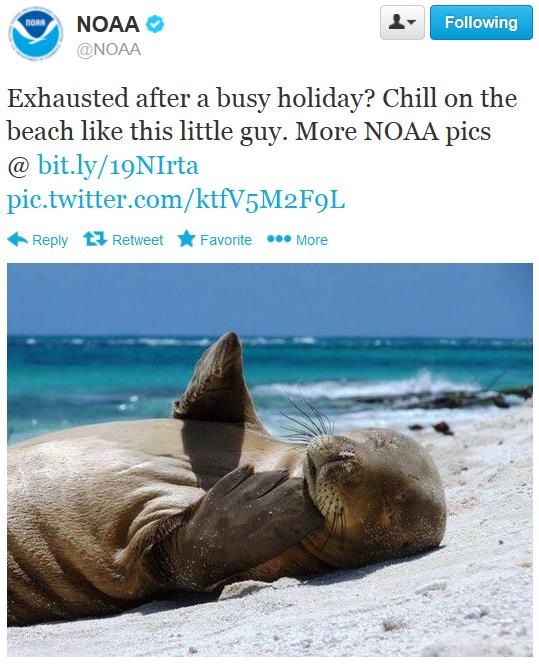 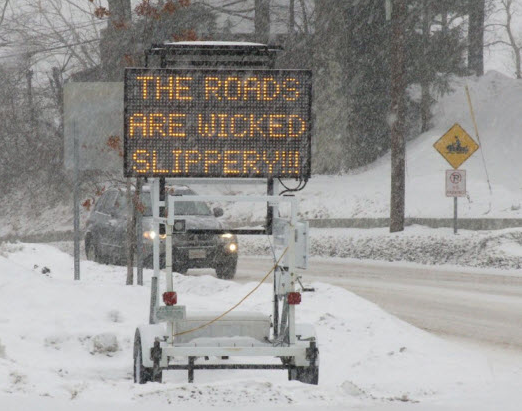