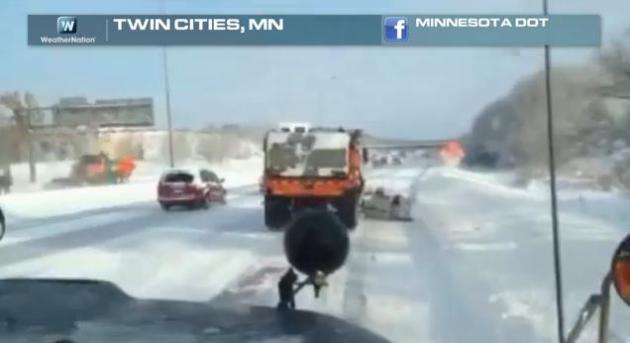 Worst Roads In 30+ Years? The first tip-off was the e-mail headline advising no travel from the State Patrol. The second tip-off was the worst commute of my life yesterday, driving (or trying to drive) from Excelsior to downtown St. Paul – all on side streets. It was like a Mensa-Level Driver’s License Final Exam that someone vaguely psychotic thought up, obstacles jumping out at you from every angle. I got here in 1983, and I can’t remember roads this bad in 31 years. A rapid drop in temperature Thursday night coincided with the heaviest snow, the “flash-freeze” turning slush near pavement-level into black ice, compaction from car tires above accelerating the icing process. And when it gets this cold the sand and chemicals take much longer to work, if they work at all. Here’s a link to the latest Climate Matters, with some of the craziest weather extremes with this last storm: “WeatherNation Chief Meteorologist Paul Douglas talks about the recent severe weather, noting the rarity of tornadoes passing over snowy ground in Illinois. Weather whiplash continues as Blizzard Warnings shared borders with Severe Thunderstorm Warnings in Iowa and the entire storm system drenched the eastern U.S. with heavy rain. Will we have a calmer week ahead?” 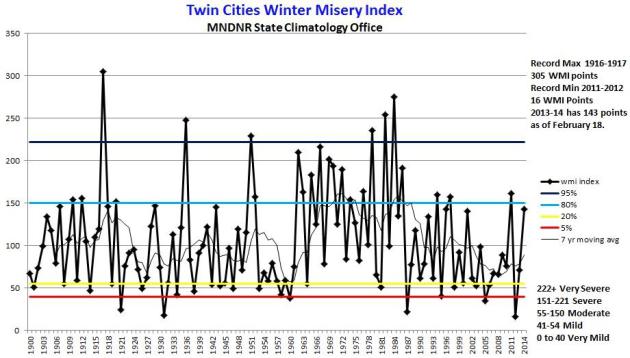 The Twin Cities “Winter Misery Index” Reaches 168 (Severe). Snow and cold lovers will be offended; others will nod their head in agreement. Pete Boulay at the MN State Climate Office confirms that this last 10″ snowfall tipped us over into a “Severe Winter”, as measured by the WMI; here’s an explanation from The Minnesota DNR: “The Winter Misery Index (WMI) is an attempt to weigh the relative severity of winters. The index assigns points for daily counts of maximum temperatures 10 degrees or colder and daily minimums of 0 or colder. If the minimum temperature is -20 or colder greater weight is assigned to the value times 8. For snowfall, one inch is assigned a point per calendar day. A four inch snowfall is times 4, and an 8 inch snowfall is times 8. The duration of a winter is noted by the number of days the snow depth is 12 inches or greater. All current measurements are at the Twin Cities International Airport. 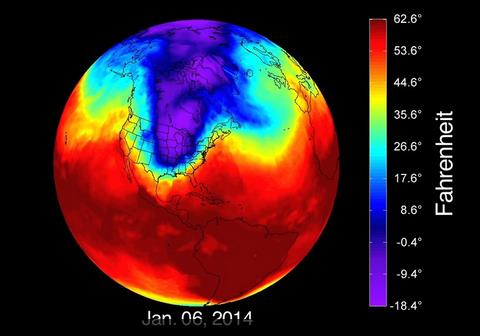 What Cold? Earth Had It’s Fourth-Warmest January. No, weather is not climate. The trouble is: we are all hard-wired to react to weather, not the longer, slower (global) climate trends that have so many scientists concerned. Here’s an excerpt from Mashable: “…The last January with below average global temperatures occurred in 1976, the bicentennial of the U.S., and the year that the first “Rocky” movie hit theaters. The last below average global temperature for any month was February 1985. According to NOAA, the combined average temperature over global land and ocean surfaces for January was 54.8 degrees Fahrenheit, which was 1.17 degrees Fahrenheit above the 20th century average. Using different analysis methods, NASA also concluded that Alaska had its third-warmest January, and central and southern Africa were record warm for the month as well. China had its second-warmest January on record, and France tied with 1988 and 1936 for its warmest January…”

$40 Billion: Drought Could Be One Of The Most Expensive Disasters In History. Will the rains come in time to help California? The odds are dropping with each passing day; the wet season winds down in March. It would take a (remarkable) amount of rain to replenish dusty topsoil and restore significant water to reservoirs. Here’s an excerpt from CBS Sacramento: “California’s drought is so severe, experts say it could have a $40 billion impact on the state’s economy, and they say it could end up being one of the top 10 natural disasters our country has ever seen. Amarel says it’s already forcing farmers to downsize, and it could wipe out some altogether, especially when food prices start going up next year. The ripple effect could cripple the state’s economy, and farmers who remember the drought of 1976 are still bracing for the worst... 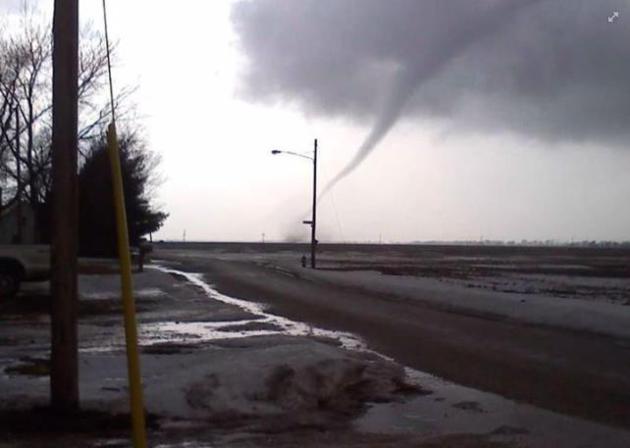 An Improbable Sight. I’ve been doing this for 40 years, and I can’t remember ever seeing something like this. I’ve read reports of isolated tornadoes over the Rockies, briefly passing over snowfields, a very rare meteorological event. But Thursday this (roping) tornado was photographed about 5 miles away from the photographer. Check out the piles of melting slush in the foreground; looks like half a foot (?) of dirty snow in that one clump. This takes weather whiplash to a new (and ridiculously jaw-dropping) level. Photo courtesy of Dana Cottingham Fricke, from Concord, Illinois. 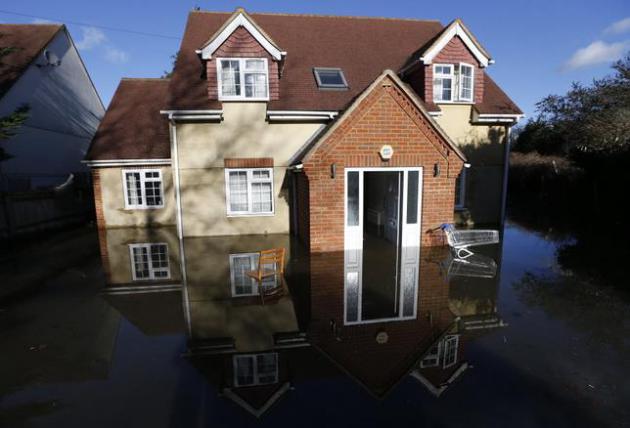 British Floods – California Drought: A Connection? National Geographic explores the still-controversial theory that rapid warming and ice melt in far northern latitudes may be impacting the configuration of the jet stream; here’s an excerpt: “…There is wide scientific consensus that global warming promotes weather extremes in those ways, even if the jury is still out on Francis’s hypothesis of an Arctic connection. “We used to say you can’t attribute any single event to climate change,” says Thomas Peterson of NOAA’s National Climatic Data Center. Now, he says, scientists emphasize how climate change is tilting the odds toward extreme events, the way steroids pump up a baseball player: “You know he’s hitting 20 percent more home runs, but you don’t know if a specific home run is a result of the steroids.”

Photo credit above: “A flooded house in Egham, England, Thursday, Feb. 13, 2014. The River Thames has burst its banks after reaching its highest level in years, flooding riverside towns upstream of London, with Egham being about 20 miles (32 Km) east of central London.” (AP Photo/Sang Tan) 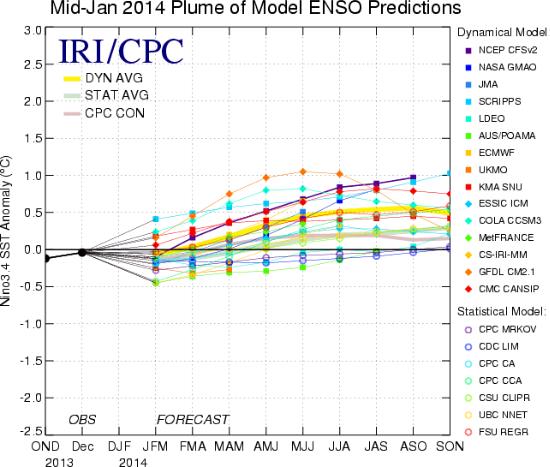 Pacific Nino 3.4 SST Outlook. Over the last few years we’ve been transitioning from a La Nina cooling phase of the Pacific to an ENSO-neutral phase, which should continue into spring. But models are increasingly hinting at an El Nino event possibly returning by the end of 2014. It’s still too early to say, but if you’d like to dig into a little light reading (29 page PDF from NOAA NCEP Climate Prediction Center) give it a shot.